Home Real Housewives of Beverly Hills News RHOBH’s Denise Richards Claps Back at Eileen Davidson’s Revelation Regarding Cast Tension at Her Husband’s Premiere, Explains Why She Was “So Nervous” and “So Sick”

RHOBH’s Denise Richards Claps Back at Eileen Davidson’s Revelation Regarding Cast Tension at Her Husband’s Premiere, Explains Why She Was “So Nervous” and “So Sick” 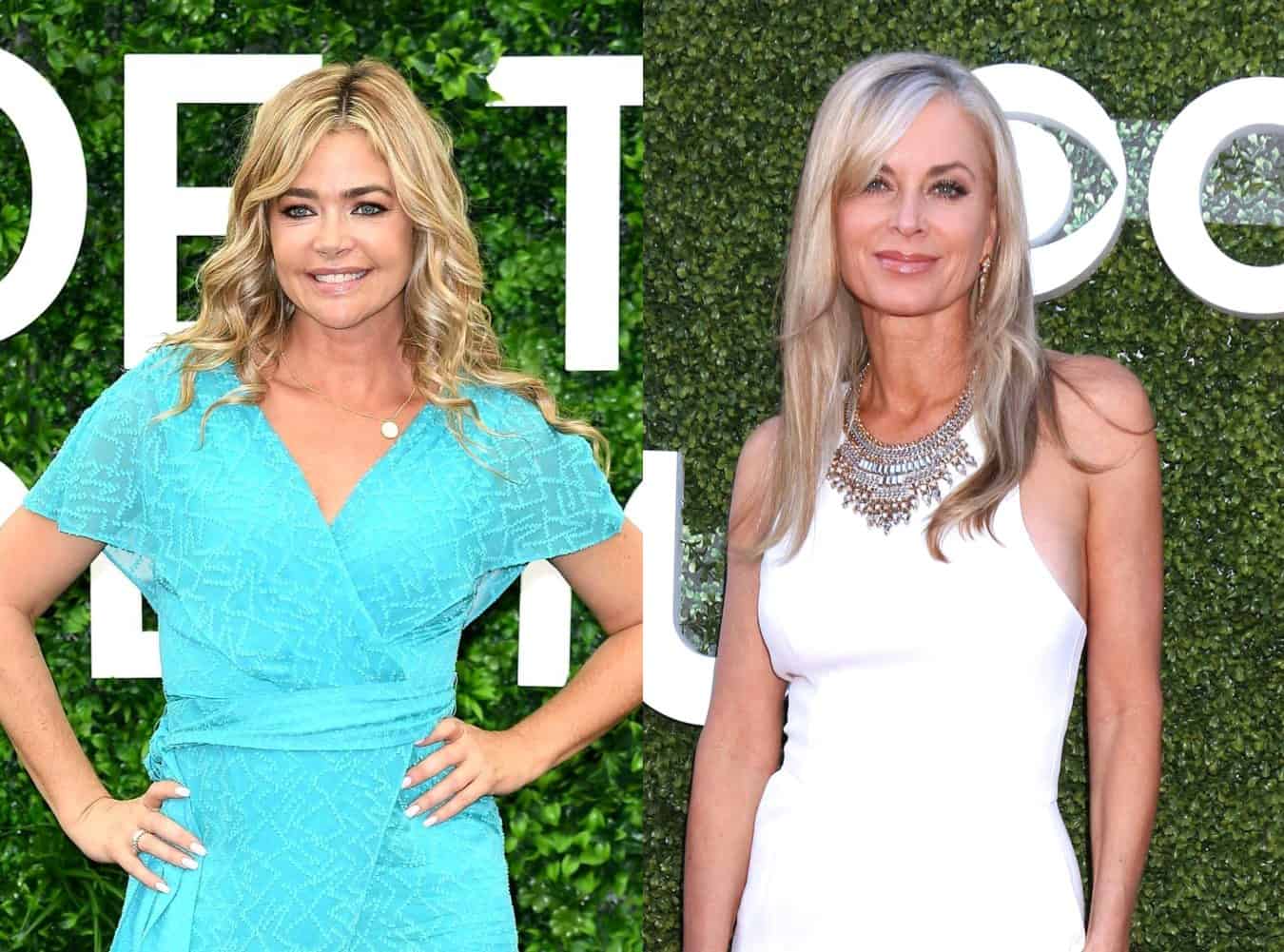 Denise Richards is speaking out about Eileen Davidson‘s recent claims regarding the tension she felt between the Real Housewives of Beverly Hills cast at her husband’s movie premiere for 7 Days to Vegas in September of last year.

Following Eileen’s appearance on The Daily Dish podcast, during which she recalled asking Denise if she was okay after feeling that “something was going on,” Denise took to her Twitter page and explained why she was “so nervous” and “so sick” at Vincent Van Patten‘s Los Angeles event.

“Since you publicly spoke about this [Eileen Davidson] when you asked me if I was ok at your husband’s premiere I was so nervous knowing I was having surgery in two days. I was so sick [and] in so much pain but we still wanted to be there. [And] I hadn’t told any of other women about it,” Denise explained on June 22. 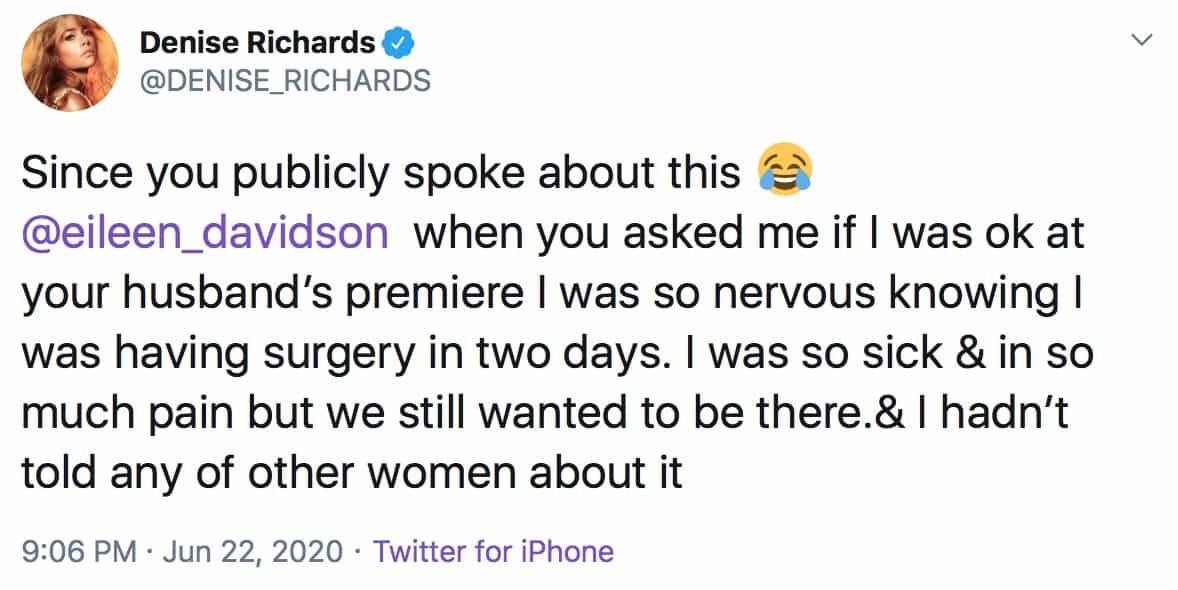 During her podcast appearance, Eileen admitted to feeling “a little weird” before asking Denise, “Are you okay?”

“It just felt weird, and she was like, ‘Yeah, I’m fine.’ Something was going on,” Eileen recalled.

Eileen then said that on the way to a party thrown by Kyle Richards, Erika Jayne and Lisa Rinna informed her that Denise had been hypocritical during a prior barbecue event, likely referring to the moment in which Denise became upset at her co-stars for discussing threesomes as her kids sat nearby.

After Denise shared her Twitter response to Eileen’s comment, she was met with a fan who pointed out that Eileen didn’t seem to be dissing her with her comments.

“I don’t think Eileen was speaking negatively of you Denise, more so she was just assessing the situation from a neutral position but wow I didn’t see this coming,” the fan explained, along with a series of grimacing face emoji.

“I never said she was,” Denise replied. 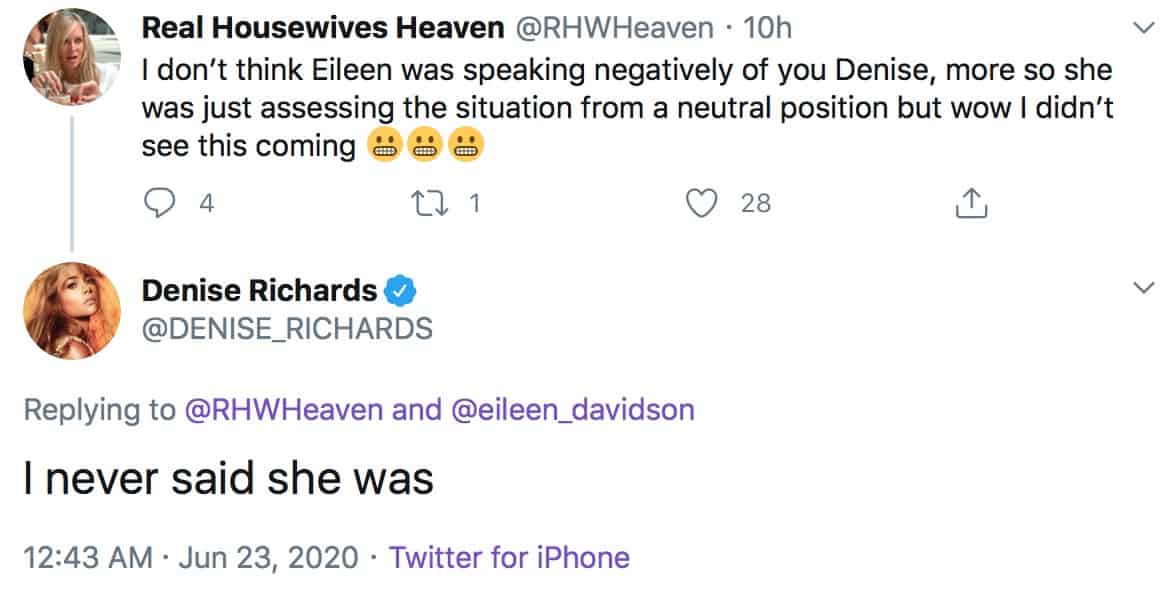