RHONY Recap: Dorinda is Confronted Over Her Temper and Makes Fun of Ramona 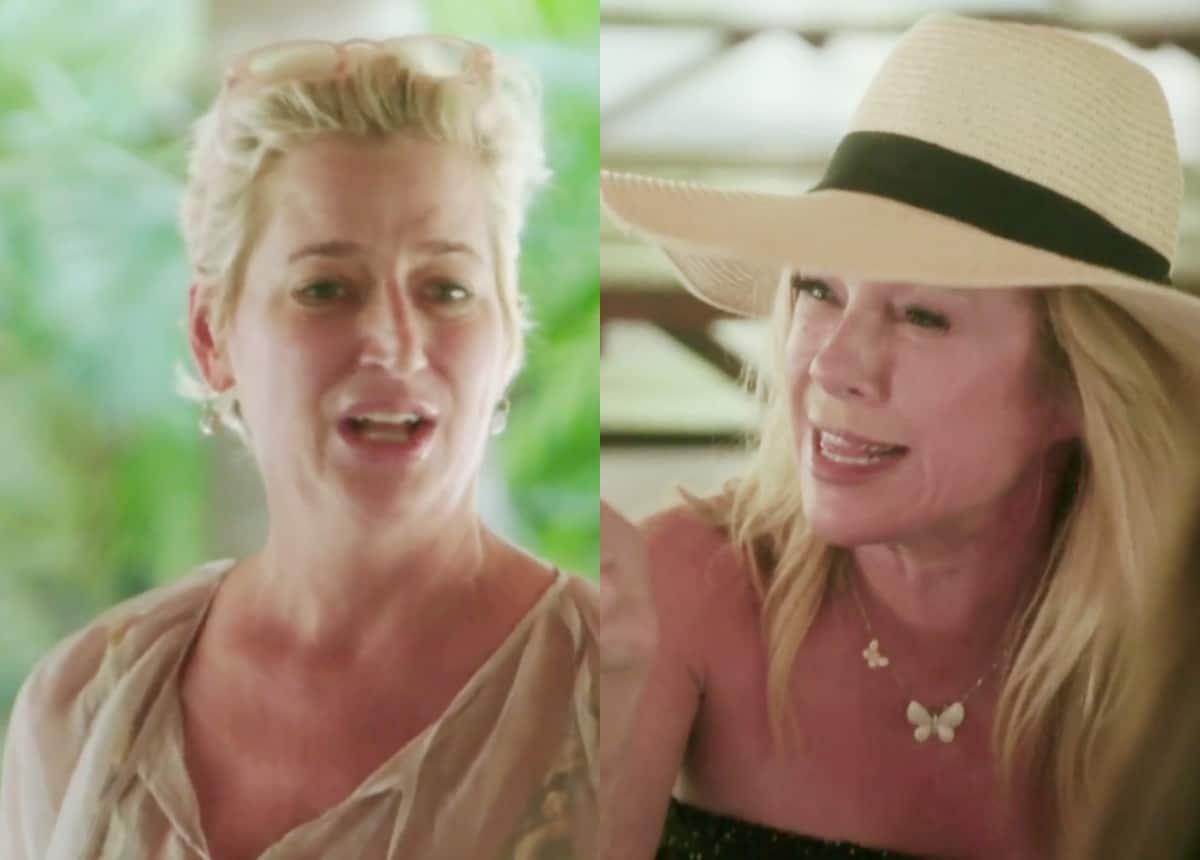 This week on the Real Housewives of New York City, we are still in Mexico partying with the ladies of New York! We left off last week with a surprise party for Sonja’s birthday. Will there be more arguments over who has a drinking problem? Let’s watch and see!

At 8:35 a.m. the next morning, Dorinda has some hot trainers over wanting to work the kinks out. They think this group is going to have a lot of energy. The problem is no one will get up — other than Dorinda. She ends up teaching them Dorobics. Luann joins them and they learn some cha, cha, cha. Dorinda has to walk off to go to the bathroom, leaving Luann to handle the two hot guys. I think Lu can handle them!

They wake Leah up and she thinks they are savages. She can’t believe they get up so early after partying into the night. I honestly can’t believe how confident these ladies are in their bathing suits. I don’t think I could prance around like them! Unless I had Lu’s body.

Sonja gets a call from Century 21 to discuss her line. She is planning a launch party to debut the line. Sonja has to preserve her reputation as a fashion designer — you know, it’s a lot of work cutting out designer labels and stapling your tags on! When Sonja is trying to work on her invites, Leah sits down with her and starts working too. Dorinda thinks it is rude to work at the table while you are having a meal. She mocks Sonja and is all, “I have to do my invites to Ryan and Kelly too.” Sonja decides to do what she has to do and walks away. Good for you, Sonja, get it done!

Dorinda makes a rule that they can’t be working or on the phone while they are at the table. Leah gets defensive since she was just trying to handle some emails. Dorinda wants all work shut down while they are on vacation. She hates when people are not in the moment. Maybe she can’t understand others need to earn a paycheck and don’t have an inheritance or something to live off of? Ramona tries to teach Leah to just tell Dorinda “You are right” when she gets snippy.

Ramona and Sonja discuss what could possibly be triggering Dorinda. Menopause is one of the things that could be a possibility. Sonja thinks witches used to be burned alive in Salem because they were actually in menopause. Now, that is an interesting theory.

I swear this villa is gorgeous at night. I love that this group doesn’t have a glam squad and is more casual than the other housewives. They do have one luxury with a staff member to blow-dry their hair. Ramona and Sonja go into Dorinda’s room. Dorinda is sick to her stomach and she can’t leave her bathroom. They can relate since they got sick in Columbia too. Leah joins them and wishes she had the runs since she compares them to a colonic? I don’t think they are quite the same thing. Luann comes into the room and has to evacuate since the room is polluted by Dorinda. She thinks this is a situation for the “Chanel all over spray!” LOL! I don’t think Chanel created that spray for this foul smell but you use what you have to sometimes!

Leah, Luann, Sonja, and Ramona head out together since Dorinda is sick. The two gentlemen from the beach come to the restaurant. This should be interesting with just two guys stuck with this crew. Leah claims she won’t do love triangles unless she is the star. Luann and Ramona get up to dance and try to get the party started. Ramona has Pascal to kind of dance together? Not sure what that move is, but hey, they are having fun right? Leah is already making out with Phillip. Hmm, that happened fast! Side note: I find it amusing that Luann is thankful that Dorinda had diarrhea so there is no tension.

The next morning, Dorinda is still in bed. Dorinda had a doctor named Cesar Casanova come to her room and gave her some medication. Was she hallucinating? I can’t believe she is able to go out after having Montezuma’s Revenge. Ramona shares how Leah and Phillip were all over each other. Leah joins them while they are talking about her. She admits to just cuddling and kissing. Leah admits she peed the bed earlier and she thinks these ladies rubbed off on her. Yeah, they do tend to do things like that and worse…

It is funny when Dorinda says in her ITM that she has to get these ladies moving each day. They are like newborn babies who have to be entertained and stimulated. Get them fresh air and tire them out. It really is an attempt to clear the tequila-toxins out of their systems from the night before!

On the bus, they are showing pictures of various men. Dorinda is surprised at how many of them they have shared. She thinks that they drag them around like rag dolls. I find it kind of gross that they share some of the guys that we have seen on this show! Sonja isn’t sharing her conquests, she is keeping them all to herself .

Leah feels like she has to suck it up! She has to be able to keep up with women who are twice her age. The Cenote sounds like a cool activity! If I was hungover, I don’t think I could do that. They meet up with Julian, the shaman, who asks the nature and creatures to bless them. God, please give Mother Nature some patience with this group! After watching the Mayan blessing, Dorinda finds this process a little scary. Imagine how the creatures feel about you all venturing into their habitat?

They are going rappelling down into a Cenote. I have gone rappelling but not down into a dark hole. That would be a little freaky. Luann fearlessly goes down first.  She is clearly the MVP of this trip! Dorinda goes next and does it perfectly. Leah is next and she is totally freaked out. It is pretty cool when they swim through the caves. It is totally gorgeous even with the creepy bats on the ceiling. Sonja and Ramona sit this one out but they do join them in the cave to swim.

Leah feels like swimming in that crystal clear water is perfect for hangovers. She calls the other ladies “Hangover Shamans” for bringing her here. I really did enjoy this scene and might do this if given the opportunity!

Leah mentions that she has a witch in Brooklyn. She studies energies. Leah had a guy who really broke her heart. It was determined that he had a bad seed. She had to have a crystal put inside her vagina to cure that bad energy. I guess that is one way to cure a bad relationship ?

Dorinda gets a call from Hannah, and the other ladies resent the interruption since it was such an issue earlier. The call is something about Hannah getting paid for a job at a library, I think? Luann thinks she should step away from the table like she asked them to do. I can see an eruption coming…

Dorinda totally misses the point that she has been a loose cannon. She makes it about a phone call with her daughter. Ramona starts crying because Dorinda walked off and won’t listen to them. Dorinda snarkily says to her, “That was pretty traumatizing wasn’t it?” They try to get Leah to turn on Dorinda but she has no beef with her. Leah admits she has a bad temper but she won’t poke that bear quite yet. Dorinda hasn’t really attacked her and the others have so she isn’t engaging in this one. This was a pretty chill episode but I did enjoy it since we got to see some of the sights.

Next week, Leah confronts her mom about what Sarah said about not liking them and Sonja has her launch party for her line. Have a great weekend!