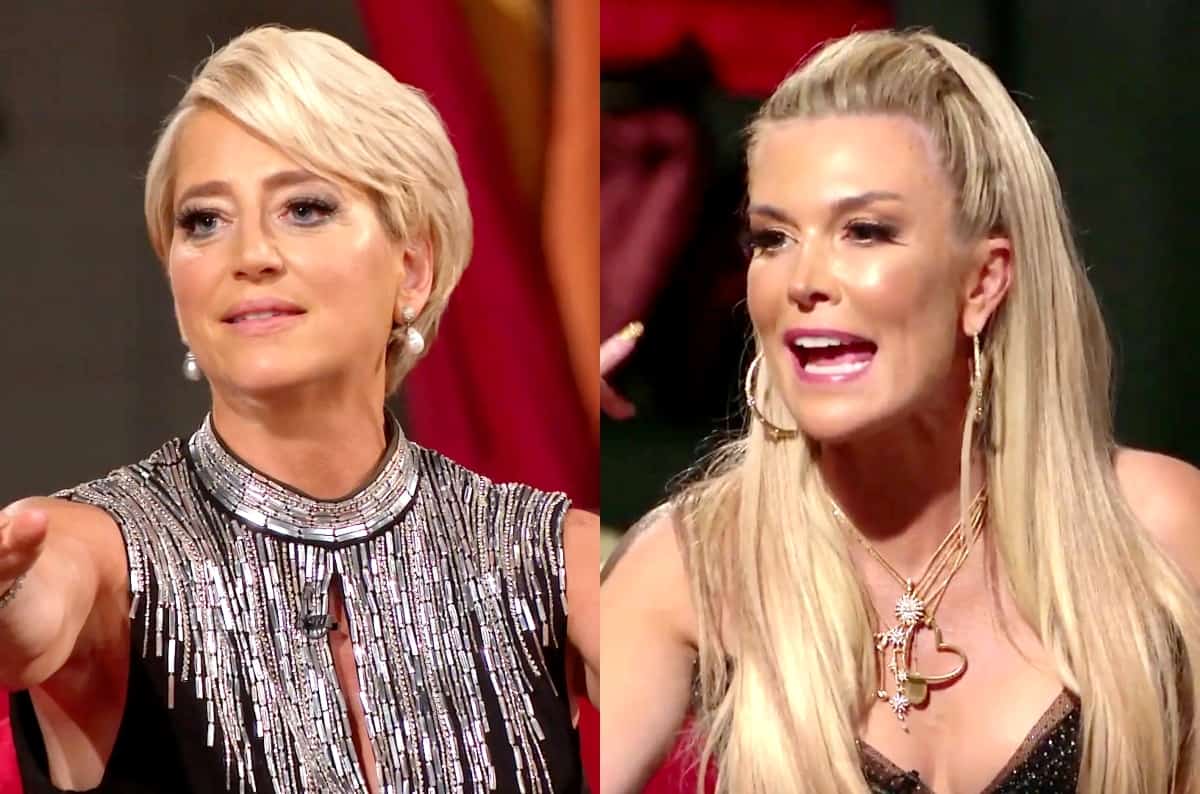 This week on the Real Housewives of New York City, it’s the first episode of a LIVE reunion! We finally have Tinsley back, and even better, she is finally revealing the real reason behind Dorinda‘s apparent hatred of her. I don’t know — we might miss the mute button on Zoom with this raucous group of ladies!

The ladies are all arriving in masks and getting their temperatures checked. They have to answer the screening questions, and Dorinda is already shading Ramona by telling them you better check her out good since she has been out gallivanting during the pandemic. The venue for the filming is decorated with relics from past reunions. and they are all sitting at least six feet apart which could be a good thing for a variety of reasons!

Let’s check out their fashion choices, shall we? Leah is sitting next to Andy (which is pretty telling that she will be back next season) and wearing another bodysuit with a sheer dress over it. Dorinda does look beautiful in her Balmain dress. I used to love when Bethenny wore his designs. Andy thinks Ramona and her long blonde extensions is her best look ever. Hmm, I am on the fence with the super long extensions, but she does look fabulous.

Sonja lifted her drapes and is debuting her new face, and she is trying to look like Ellen Barkin? The new and improved Luann looks elegant in her Jovani gown. I would have been disappointed if she wore anything else. Tinsley looks beautiful in her Monique Lhuillier ballgown that probably brings her back to her debutante days. It is too much tulle for me but she can pull it off.

One major highlight of part one of the RHONY reunion was Dorinda and her nasty behavior, which was directed at Tinsley. It is almost painful to re-watch how relentless she was. The turkey baster comment was such a low blow, and Tinsley found it vile that Dorinda shamed her for wanting a child. Dorinda said she was joking and she half-heartedly apologized. Andy just thought it was plain mean. Me too!

We finally get a little clarity on what transpired behind the scenes to understand what ignited Dorinda’s flame. Tinsley shared that Scott gave John some money, and apparently, Dorinda went batsh*t crazy over it. It got so bad that the producers were worried for Tinsley’s safety in Miami. We then see a clip where Dorinda is yelling at John on the phone for accepting money from Scott. She was probably mortified her boyfriend was getting money from the Coupon King Scott. Dorinda ends with, “Tinsley, I hate your life.” Wow, now we FINALLY have an idea of what set her off.

The conversation also touches on where everyone was during the quarantine. Ramona and Avery were in Florida with Mario. Sonja was stuck at a spa in Palm Springs and getting an insane amount of colonics and a little nip and tuck. Luann has been working on her book and her cabaret.

Leah slammed Ramona on Instagram, saying her actions in Florida were shameful and she lacked empathy. Ramona defends her actions and claims she wasn’t being insensitive. According to her, she first had a sinus infection, potentially Lyme disease, and then COVID-19. Ramona was going to the beach at the Boca Beach Club.  Sonja said she was literally a walking petri dish with Lyme disease, sinus infection, and COVID traipsing all over the beach.

They discuss how Ramona went to a party where Donald Trump Jr’s girlfriend got COVID. Ramona was running around without a mask. She was also at the Breakers and swapping spit with Harry Dubin. YUCK!  Damn, this guy is like a Jack-in-the-box popping up everywhere! Ramona just starts ranting, “I don’t wear a mask on the ocean!” Andy tries to get her to see how her behavior was perceived. Andy sure misses that mute button right now since he needs to tell them all to shut up. Oy vey.

Leah and Ramona go at it over COVID. They battle it out since Ramona was traveling to Palm Beach and not being careful. Ramona claims she was allowed to come back to NYC but there was a quarantine period that she frankly ignored. Why is anyone surprised that Ramona did what she wanted to do and showcased how great she was doing?

Leah is the first in the hot seat regarding her actions throughout the season. They discuss her excessive drinking and of course the infamous tiki torch throwing while nude. Andy tells Leah that he is getting some positive feedback on her from celebrities. Luann shares she liked her immediately, and Tinsley thinks Leah did great in her freshman season and admires her confidence. Leah does get some grief from viewers over her age shaming. She doesn’t think she does that at all and she admires them. Leah actually did upgrade her apartment after Luann felt it was a little understated and not up to Countess standards.

Andy asked the other ladies about Leah’s tattoos and how they tried to shame her. The only comment that offended her was that Sonja wouldn’t have sex with someone who had them. Consider that a positive at least — when she gets trashed she won’t try to make out with you! I would cover my body in tats! It would be like a repellent!

Leah gives us the story behind her purple wings tattoo. She was actually only 17 and on a hallucinogen. While Leah was in another dimension, high on this stuff, she saw herself with purple wings. She decided the image needed to be permanently imprinted on her and the best place for it was her pus*y. Hmm, okay, I don’t really get the meaning of why that would be the perfect spot but to each their own.

Andy asks how her family and Rob feel about her season, and it’s no surprise that her mom didn’t care for the drinking and nudity. Leah’s dad is a fan of Sonja and has a crush on her. That’s pretty funny since Bunny is exactly the opposite of Sonja. Leah says Rob got a little jealous when she was with the bartender on the show and his Guido side came out. Maybe these two will get together in the future? Ramona accurately surmises that they probably all drove her to drink just by hanging with this group. TRUTH.

Andy then decides to do a drinking montage to document the drunken debauchery from the season. Dorinda was slurring and spitting like a camel. Sonja was falling out of chairs and stumbling around naked saying, “I’ve reached my limit.” No duh. Luann is shown drinking but she doesn’t really act up like the others. I think this franchise needs to have an exclusive AA group. Leah’s scenes with her parents show their discord over her drinking.

Dorinda thinks Ramona criticizes her drinking and uses it as a weapon. She finds a way to throw Ramona under the bus by saying she sleeps around and drinks a lot herself. Dorinda never says anything about that. Sweetheart, you just did say it.

Dorinda deflects the criticism and finds it accusatory. Well yeah, they are accusing you of being an out-of-control raging alcoholic. She basically throws Ramona under the bus, telling the other ladies what she said about them behind their back. Whore, tramp, lush, etc. The only thing I do agree with is that Ramona is not all about female empowerment.

Andy tries to call Dorinda out on her drinking. Dorinda needs to honestly re-watch the season and see how toxic her behavior was. He tells her she is being extremely defensive. Andy can’t get Dorinda to answer the darn question. She admits to using alcohol as a crutch when she is stressed. Yeah, a crutch that she likes to use to beat over the heads of others! Let’s just call her Dorinda the deflector!

Leah gave up alcohol during the pandemic. Luann claims she did stop drinking again since she doesn’t like how it controls her. Sonja says her diuretics caused her drunken antics. Uh sorry, Sonja, it wasn’t just water pills. It was more of a wicked combination of pills and lots of booze.

Tinsley is next on the hot seat about her choices this season. She dated Bruce from Chicago to hopefully make Scott jealous. Tinsley was hoping the Chicago connection would bring her and Scott back together. She finally decided to follow Scott and move to Chicago. That diamond on her finger is gorgeous and huge! I would move to Chicago too! A viewer makes an ironic comment that she had to leave housewives to become one.

Tinsley only felt support from Leah and felt the others were dismissive and frankly bitter and jealous. Sonja thought Tinsley brought up having kids ad nauseam, and Dorinda thinks since she met Scott on the show she should have been appreciative . Tinsley chose Scott over the show and rightfully so. We then see wacky Sonja during this putting hand sanitizer on her legs since she needs a little shine. You just can’t make this sh*t up.

Next week, Dorinda is still in the hot seat, and is she seeing someone? Ramona shares the texts that Dorinda sent her and how their friendship has changed. Have a great weekend!

Side note:  So now Andy is saying that Dorinda recognized she wasn’t in the right headspace this season and should have taken the year off? He claims the door is still open to her and she needs a pause to hopefully get some help. Let me know what you think about all of this going back and forth?