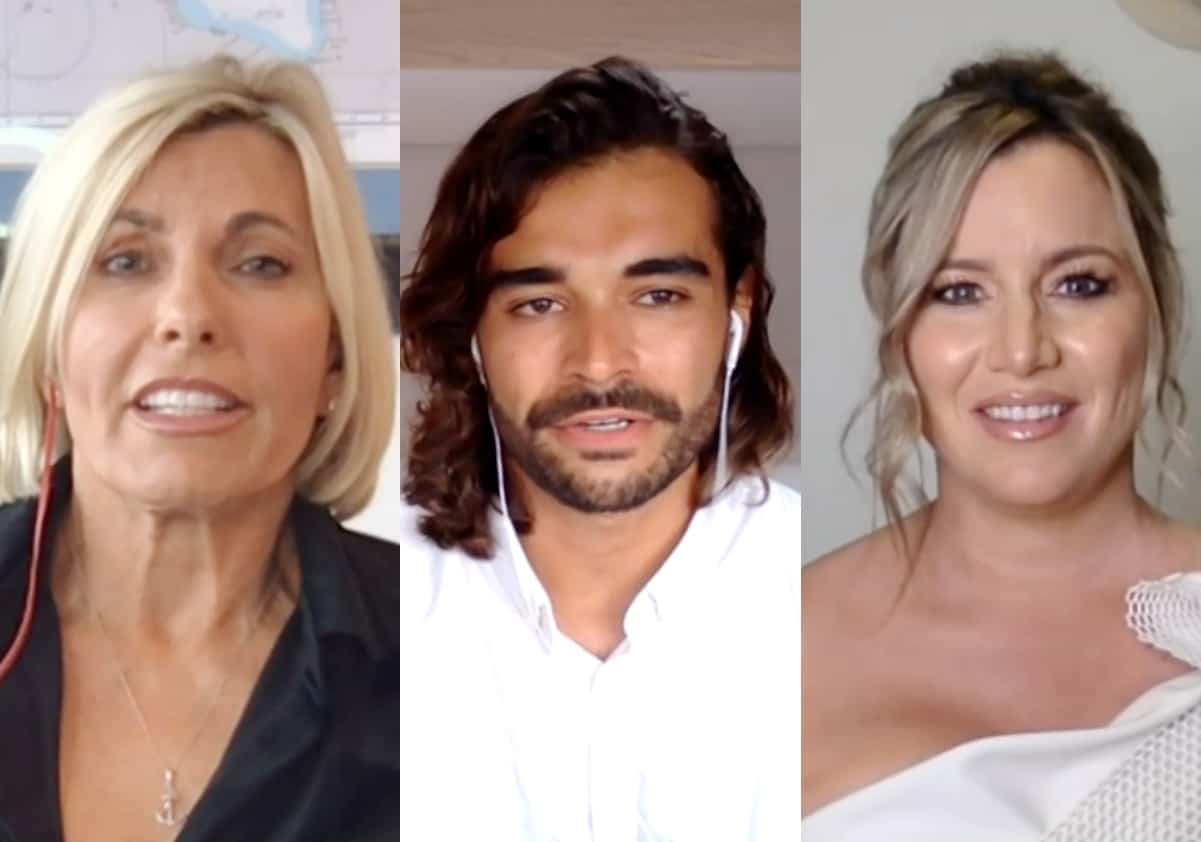 Not gonna lie…seeing some of these faces truly makes me smile (ie: Kiko; Hannah). And then there are a few other mugs that I would rather never see again (ie: Malia; Captain Sandy; Tom). It’s time for the season five reunion of Below Deck Mediterranean, part one.

Captain Sandy is Zooming from Colorado, Hannah is up at 4 a.m. from Australia (she is *glowing* in her eighth month of pregnancy), and Malia is living it up in London (and apparently took accessory cues from Bugsy). Kiko is in Martinique (and what a joy it is to see him!), Bugsy is in the Bahamas, and Jessica is down in Miami. Alex is in Long Island and Rob is in West Palm Beach, Florida — which is pretttty close to Jess. Too bad they’re no longer in love. Sigh. And Pete…??? Who???

LOL to Lara declining an invite to the reunion. She claims she was represented unfairly on the show, but let’s be real. The cameras don’t lie. Lara, YOU gave yourself that bad look. Captain Sandy gets grilled on her priorities after being down a stew and she claims that laundry is something that is very important. Hannah lays into Captain Sandy and I am here for it. Captain Sandy defends herself by saying that the laundry room was always clean once Bugsy took over (of course). Something tells me this is less about laundry and more about Captain Sandy’s disdain for Hannah.

Kiko explains that he knew Bugsy was out to get Hannah based on her lemon comments. He has like a sixth sense sniffing out the competitiveness from Bugsy. Bugsy, on the other hand, feels like Kiko blew the whole thing out of proportion. This whole reunion is simply about taking sides and it shows. When asked who is the better chief stew, Jess explains that Bugsy was the more *direct* chief stew. Actually, it’s more like Bugsy straight told Jess what to do, which is exactly what a girl with zero work ethic needs.

Hannah keeps getting brought to the chopping block for apparently checking out of the season early. According to Bugsy, she thought Hannah did not really want to be on the boat. Hannah states that she felt like her end was getting near and that yachting becomes exhausting after so many years. To put it simply, Hannah WAS over it because she realized her priorities shifted and there ain’t nothing wrong with that!

Andy addresses the elephant in the room, the question we were all asking ourselves: “Pete was terminated from Below Deck in June.” Captain Sandy states that she was “blown away” by Pete’s racist meme and behavior over the course of the season. Pete just didn’t seem to get it, and he constantly called Malia sweetheart even though she was his superior. Speaking of being superior, Malia gets a whole lotta praise for being a female bosun but not for always running to Captain Sandy for guidance. She explains that she runs to Captain Sandy because she is a tattletale — I mean, she wants to get the knowledge and experience from Sandy. Eye. Roll.

Favoritism resurfaces throughout this reunion, especially when it comes to Hannah and Captain Sandy’s relationship, or lack thereof. “Hannah, did it bother you that Malia was Sandy’s favorite?” Nah. Hannah is unfazed. She believes that year after year, Sandy chooses a favorite, and it’s just never been Hannah.

Hannah feels like Captain Sandy made a snap judgment after viewing a scene of her from season one (talk about holding a grudge!), but Captain Sandy claims she “resets” each season. Not buying it… Does it annoy Captain Sandy that Hannah is simply there for a paycheck? Answer: YES. Question: WHY? Also, how annoying is Malia’s face as Captain Sandy goes on and on and on about how great she is?

Kiko is an absolute angel and he is most certainly qualified to work on a superyacht. Did we all forget about his 57236289570 plate meal?! He admits that he is human and learning “day by day,” but apparently, Malia thinks this is funny. She giggles as Captain Sandy tells him that he “needs more training” and that it isn’t “personal.”

Malia certainly won’t be laughing when she re-watches Chef Tom‘s temper tantrums, amiright? Hannah defends her BFF and reminds Captain Sandy that instead of knocking Kiko down, she should have built him up. Instead of owning it, Captain Sandy makes some ridiculous point about getting knocked down but still getting back up. She reminds Kiko that he wasn’t prepared and that he was not suited for the position.

Andy asks, “What is Vegas food?” GOOD QUESTION. Certainly don’t ask Hannah… Hannah makes it clear that she def did not sabotage Kiko on purpose and even Kiko admits that he didn’t put out his best meal on the infamous Vegas night.  Captain Sandy believes she “kept it light” on the night she fired Kiko. She blames her exhaustion for her actions regarding Kiko, but no excuse is good enough for the way she bullied him and beat him down that night. Kiko, ever the gentleman, “totally respects” Captain Sandy’s opinion. He realizes that chefs have to improve daily, but he manages to stay positive and polite like the class act he is!

Hannah makes it clear that she truly had food poisoning and that she wasn’t just avoiding her crewmates the night Kiko got fired. TBH, I wouldn’t blame Hannah if it was all a charade, but no one wants to be hospitalized if it’s a scam! Malia believes that Hannah’s work ethic started to slide because “yachting just isn’t her thing.” Hannah states she was unsure what her yachting future would be coming into the season, and when she had a terrible experience with Lara right off the bat THIS season, she kind of packed it in. She says, “I really just wanted to do my job and get my paycheck and go home.”

Ugh. Re-watching Sandy announcing the room switch on the walkies and not addressing Hannah directly is absolutely cringe. Sandy tries to play it off like this should not be a captain’s decision (BUT MALIA BROUGHT THE CAPTAIN INTO IT LIKE SHE ALWAYS DOES). Hannah retorts, “Did you not put me in charge of room assignments?” Take that, Captain.

When Hannah can barely stand Captain Sandy’s excuses for Malia, she mutters, “Everything came to the bridge with Malia.” LOL. Notice Captain Sandy and Malia are having a hard time directly answering any question relating to the rooms and instead just try and question Hannah’s like or dislike for Bugsy.  WHAT? Malia feels as though this room thing got blown out of proportion, but I think it’s pretty clear that Malia was the one who was making this a bigger deal (remember the crying, Malia??).

“It’s my job to report drugs,” says Malia the DARE officer. Wonder if the room swap had any reason for Malia narc-ing out on Hannah?  Andy dissects the photo that Malia so meticulously staged, but Hannah is not off the hook completely. Everyone wants to know why Hannah did not register her Valium and Hannah admits she messed up.

Captain Sandy reminds Andy that people need to be able to perform their job, and if one were on Valium, things could become dangerous. Hannah smirks and asks Captain Sandy why she doesn’t trust her. Captain Sandy makes things about her and shares that mental illness runs in her family and that because of this, she is sober. LOSING it over Hannah’s mug and her perfectly timed sip: “I need a Valium.” Touché.

Can we all agree that we just want to drink red wine with Alex? He is the only one looking like he is having a good time here.

As Andy zooms in closer and closer he drops a bombshell: The vape pen manufacturer says that Hannah’s pen is a THC pen, not a CBD pen, SO there’s that… How is Hannah gonna explain her way out of this one?

TELL US — THOUGHTS ON THE LATEST BELOW DECK MED REUNION?