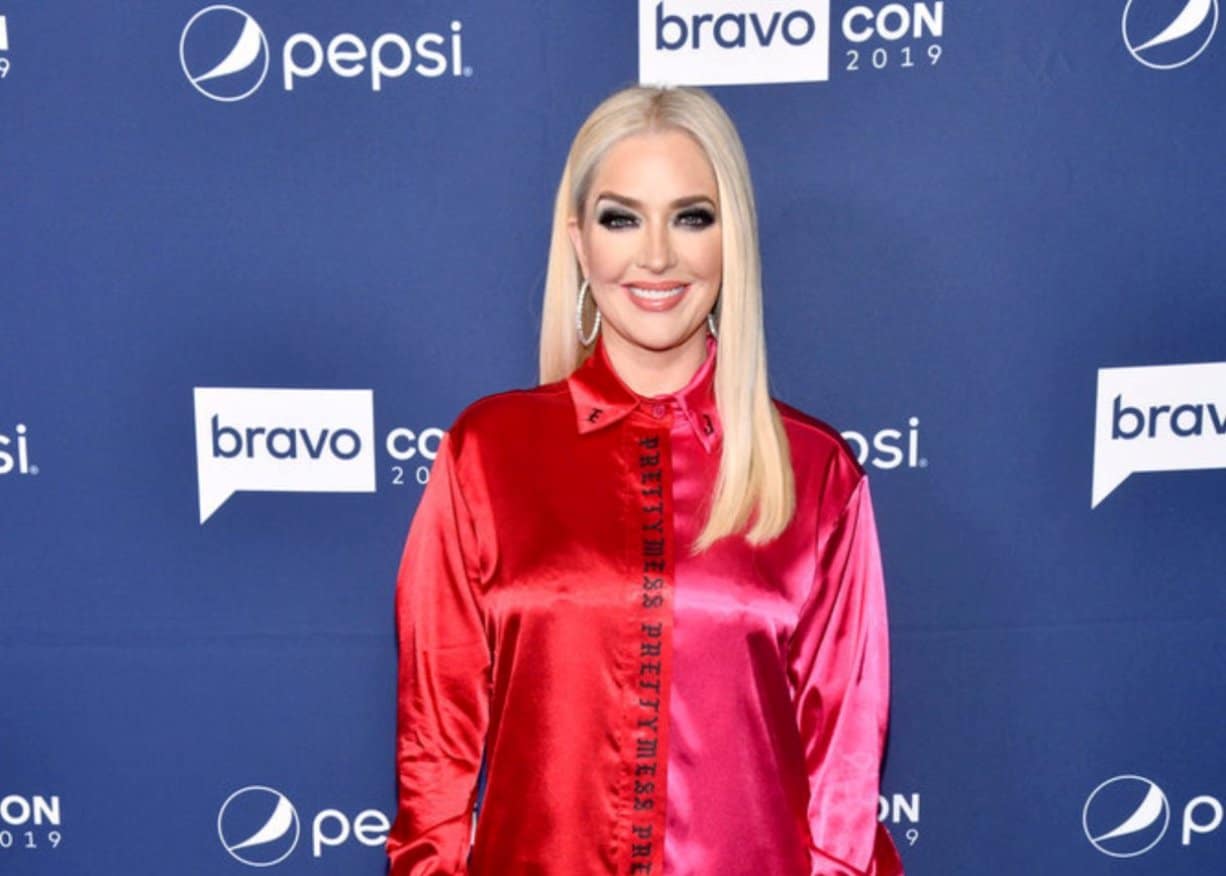 Erika Jayne was involved in a messy feud with a fan page after she shared a photo of herself, Lisa Rinna, and Robyn Dixon on Instagram on Sunday and compared them to the Pink Ladies of Grease.

After the Real Housewives of Beverly Hills cast member shared the same photo posted by the Brands by Bravo Instagram account on her page but failed to say where she got the idea from, the fan page called her out for refusing to credit her for putting together the meme as her co-star, Lisa Rinna, weighed in.

On October 19, Brands by Bravo shared the post below, which included their comparison between the RHOBH cast members and Robyn and the Pink Ladies as well as a collage of the two groups of women.

“Hey. That’s my photo! Can you credit me [please]?” Brands by Bravo asked Erika under her post.

“I know that. But the meme and the caption were my idea,” the Instagram account explained. “I’m a huge fan of yours and nearly passed out when I saw you posted my meme. I just wanted credit for it. And in my post I credited Bravo for the photo. Thanks!” 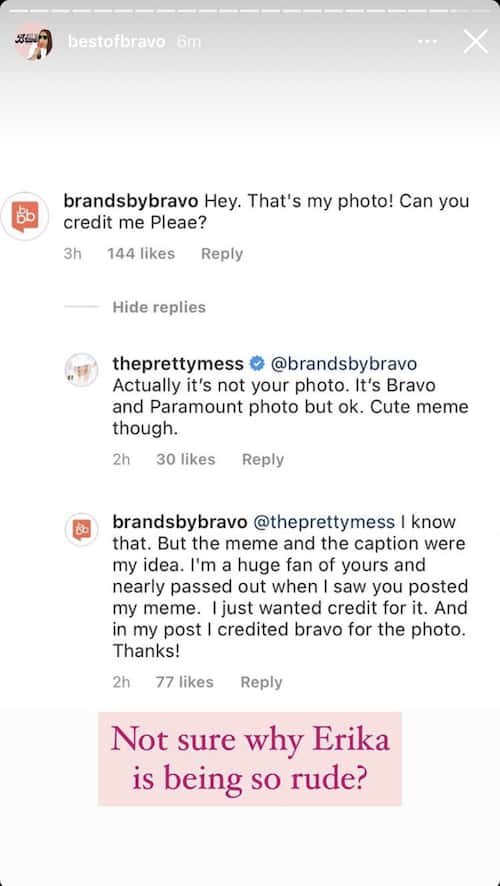 After being accused of stealing the meme, Erika told the Instagram page that they didn’t deserve the credit because the ideas shared in their post weren’t their own and again said the images did not belong to them.

“The way to get more ‘credit’ for your ‘ideas’ is to come up with your own and stop leaving comments on my page about how you feel wronged. These images do not belong to you. Now go make some interesting sh*t that I can promote,” she stated, adding that it was Kyle Richards who took the photo of her and Lisa.

“Be happy people will now check out your page. Isn’t that what you wanted? Credit? Well here it is,” Erika continued.

Then, after the fan page suggested that their feud with Erika was about “as exciting as this past season of RHOBH,” Erika again clapped back.

“Actually both are boring. This is no feud but a lesson that YOU do not own others images and then want ‘credit’ for them,” Erika stated. 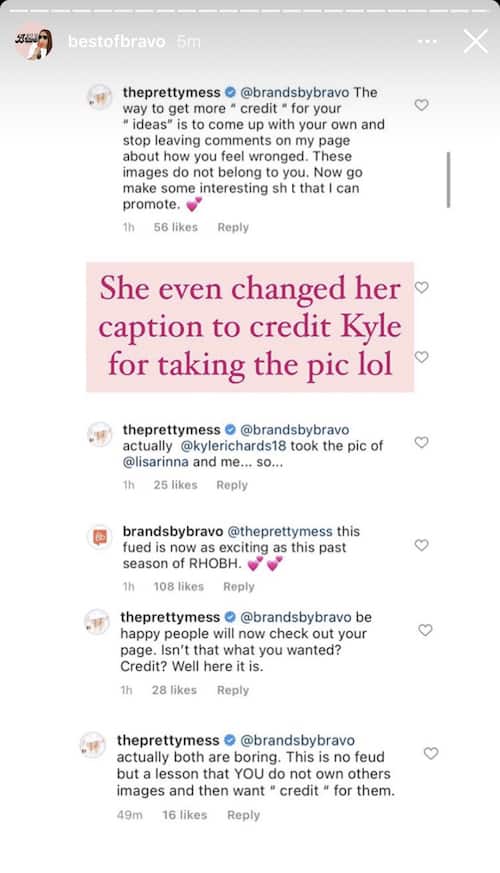 In addition to failing to give Brands by Bravo credit, Erika actually edited her initial caption to reflect a photo credit to Kyle and said in another comment that “no one deserves credit” because every single photo was “stolen.” 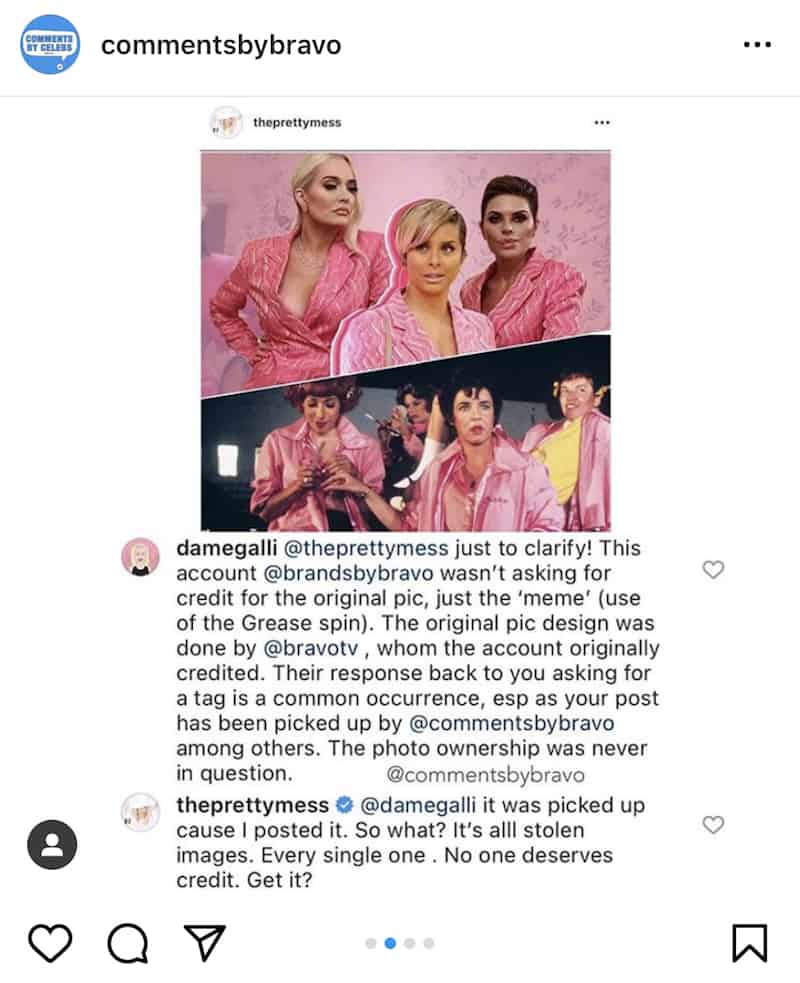 Following her extended feud in her Instagram comments, Erika took to her Instagram Stories, where she re-posted a message shared by one of her fans and followers, which featured an image of the RHOBH cast member licking a lollipop, and made it clear what she thought of the feud.

“Still not giving a f*ck,” a caption read. 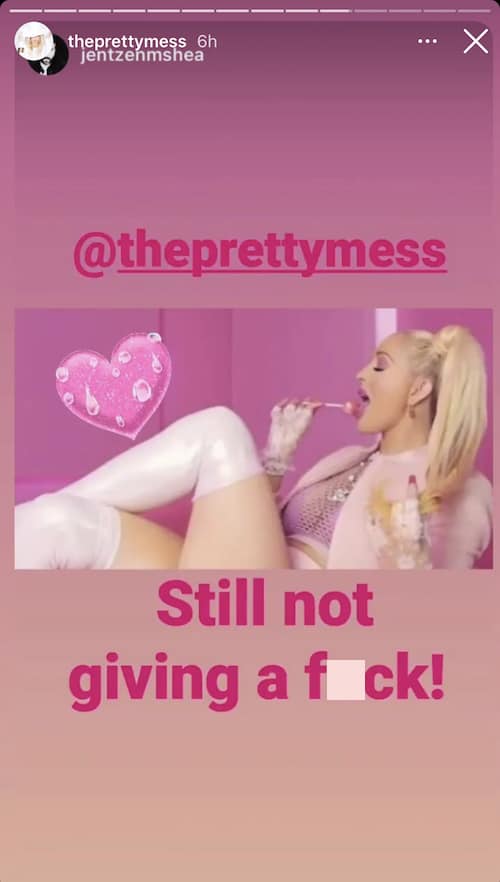 Lisa also shared her thoughts on the feud after seeing a recap of the drama posted by Comments by Bravo.

“Well our Memes break the internet. Always. You’re welcome bravolady you had great f*cking content,” she told the fan page.