Home Below Deck Mediterranean Below Deck Med Reunion Recap: Hannah Denies Having a THC Pen; Tom Apologizes for His Behavior and Offers An Update on His Relationship With Malia; Plus did Rob Slide Into Aesha’s DMs?

Below Deck Med Reunion Recap: Hannah Denies Having a THC Pen; Tom Apologizes for His Behavior and Offers An Update on His Relationship With Malia; Plus did Rob Slide Into Aesha’s DMs? 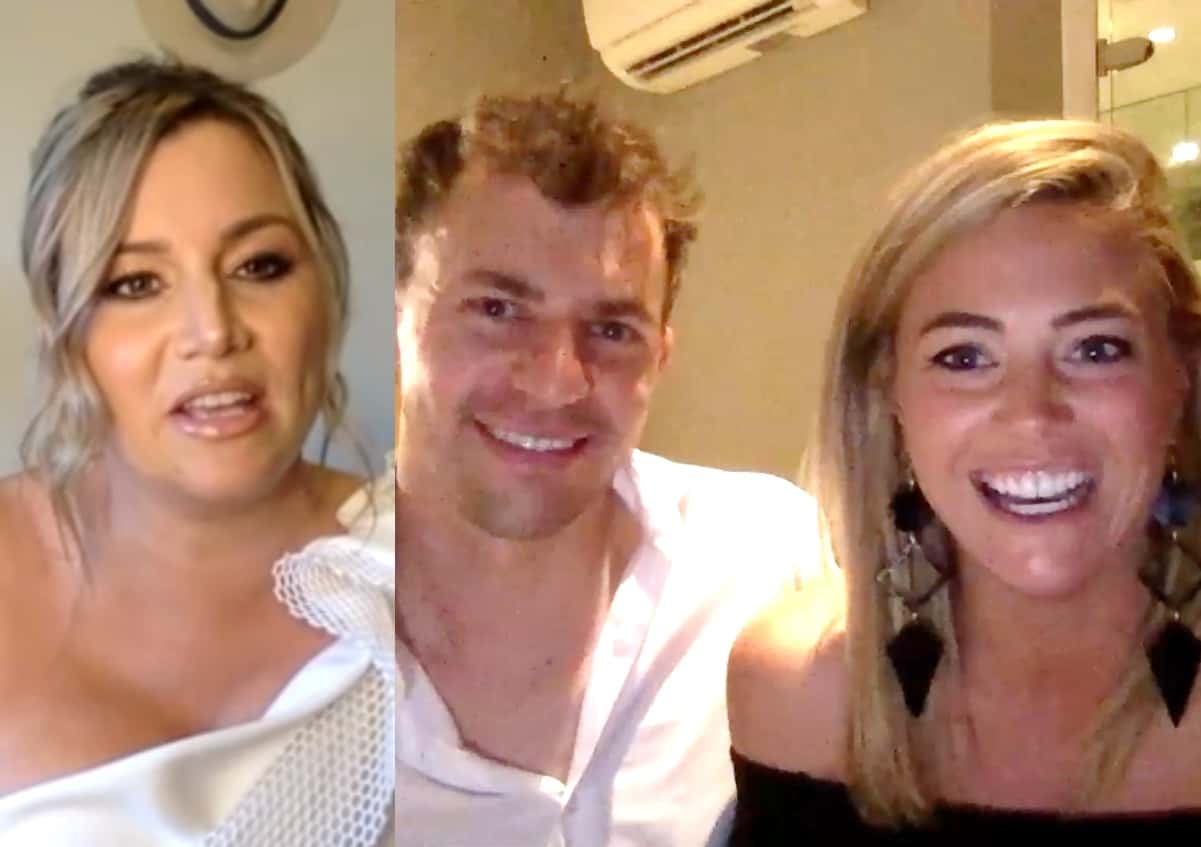 Andy drops a bombshell: SO, according to the manufacturer, Hannah’s “CBD pen” is actually a “THC pen.” Hannah does not hesitate in her denial of this information and continues to claim she was using it with CBD oil. Apparently, Jessica is a CBD/THC pen specialist and tries to explain facts about pens, but naturally, Captain Sandy and her mini-me Malia won’t let her get a word in.

Jess keeps trying to jump in and explain/defend Hannah, and in the midst of her frustration, she admits to also having a pen on board. This leaves the captain astounded and Malia frustrated (because she could not narc out another member of the crew). Jess can’t fathom why this would be such a big deal and tells Sandy, “Cuff me. Oh my God. Arrest me.” This girl is wild, especially when she claims she did not know THC was illegal. Evidently, Jess meant to say CBD, which I am not buying and which also ruins her credibility for #teamHannah. Also, let’s address Alex just shoving popcorn in his mouth as the drama builds among the women. He is my hero.

Narc-Malia goes on to explain that she was not going after Hannah because she is Hannah, but rather because…say it with me now…of maritime law. Malia keeps saying “we” did this and “we” did that to follow proper protocols in handling Hannah’s breaking of the law. Didn’t realize that being boson also meant she had to deal with all of this, too! What an exhausting position. EYE ROLL.

OBVIOUSLY Captain Sandy checked with her maritime lawyer about this, and essentially everything is illegal on a “vessel.” Tylenol? Get out. Benadryl? You’re fired. Sandy drives home how serious this matter is and Malia better quit saying, “It’s maritime law!” Loving how Hannah straight yawns when Malia is trying to school her on drug usage. She is checked out.

Bugsy’s brain is blown and she just keeps reiterating that it’s “yachting,” and that’s why Malia reported it. HUH. Malia won’t let this go and keeps going on and on about the bridge knowing and Hannah has about had it (as well as all of the viewers). Hannah asks why Malia did not report the Valium as soon as she realized Hannah had it on board and further asks, “What happened the night I asked you to get the Valium? Did you find it?” Malia’s hesitation says it ALL.

Captain Sandy nods along with her protégé, Malia, and I was not aware that Malia became a pharmacist in the off-season. Captain Sandy tells Jess to shut up and that basically everything is illegal on a ship (that is what I got out of the segment). Jess is ready to explode. She wants someone else to speak about this subject because she is beyond sick and tired of Malia’s school of maritime law. Bugsy jumps in to try and make this less about Malia vs. Hannah, but she can’t get a word in. Heck, Andy can’t even get a word in between this crazed fighting crew!

Andy asks if Captain Sandy and Malia manufactured all of this drama before it unraveled and Bugsy calls Andy’s question BS. Of course. Bugsy claims she only knew she was coming on board a few days before and that she was coming on as a second stew, not as chief stew. The way it went down just happened to be.

SO OVER ANYONE SAYING MARITIME LAW. Hannah claims it would have been nice if Sandy pulled her aside prior to firing her, but alas, Sandy would never do that, unless of course it had been Malia in Hannah’s shoes.

Rob adds his opinion in and claims that Hannah should have disclosed her prescriptions and this just sets Jess off. Apparently, Jess came to fight this reunion! When Rob reminds her that she, too, had a “weed pen,” Jess claps back and threatens to spill any and all of Rob’s secrets. PLEASE DO!

Andy bids farewell to Hannah and she looks relieved to be exiting that sh*tshow. She handled herself with class throughout the attack(s) and she will be missed. Cannot wait to see her become a mom!

Aesha and Tom join the Zoom and I could do without one of them. Guess who? Yep, Tom, the cry baby, who claims he does not have a big ego…like Kiko. WHAT… Re-watching his season’s hot hits is cringey and re-living his relationship with Malia is repulsive. Tom does admit that his attitude was pretty awful while in the galley, but he attempts to explain it away by saying he is used to working with multiple chefs while on a yacht. Save it. BTW: The way Malia looks at Tom is another level.

Naturally, Captain Sandy calls Tom a “perfectionist” and chooses to glaze over his childish antics. I guess she forgot about all the times Tom spoke to her like a piece of garbage. Sandy believes this behavior is normal (but not okay when Kiko became emotional) and Malia shouts out that “chefs are crazy” and giggles. Gross. At least Malia admits that she “meddled” more than she should have in the galley, but alas, she was just looking out for “her person.” Wonder what Captain Sandy thinks about that… Malia sort of regrets Tom joining the crew, but at the end of the day, she is happy to have shared the experience with him.

WTF is Tom talking about regarding not following Malia on social media? He goes on to explain that he has gotten death threats due to his connection to Malia, but that does not explain why he doesn’t follow her, amiright? Andy asks if they are they together and I can’t seem to understand Tom’s unclear explanation of their current status. Maybe Captain Sandy DOES have a chance with Malia?

As if we can handle discussing another boat-mance…it’s time to touch on Rob and Jess. Rob states that they just “fizzled out” and it was a lot “to try and manage.” Yea, it’s understandable that Jess and her jealousy got out of hand. Dying over Andy telling Rob that his “I love you” to Jess was a little Bachelor-y of him. LOL.

Regarding Rob’s “open relationship,” Jess clarifies that it was never open…it was a true ‘ship with his girlfriend. Rob still claims that he was happy with his decision to go to Bali with Jess despite telling everyone on the ship that he was going to do the crossing instead. Jess explains that she felt a little blindsided by Rob’s behavior, but Rob regrets nothing.

Aesha and her camera/internet connection is so wack. Also wack is the fact that Jess is still going on about Aesha touching Rob’s a*s. Let’s be clear. Aesha wouldn’t gently touch Rob’s butt if she meant to. We all know she would smack it or grab it! Come on… Aesha calls it all ridiculous (cuz it is), but Jess still can’t wrap her mind around Aesha’s justification. Jess states she is not a jealous person (HAHA), but she felt like Rob was “gaslighting” her.

Rob claims that his relationship with Aesha is more like brother/sister, although it is WEIRD that Rob would DM Jess raunchy things. (Wait — how does Jess know about Rob’s DMs??) He eventually admits it was a friendly banter mixed with flirtation, but Aesha states, “There was never any attraction. No chemistry. Nothing.” After all, Aesha is in a relationship now and seems super happy.

Bugsy finally realizes that Alex is a catch, but too bad, so sad. That ship has sailed. Alex explains that they are just good friends and they keep their relationship realistic, considering they are far away from each other.

When asked about the highs and lows of the season by Andy, Malia states that her high is finishing the season with “everyone” (Really? Everyone? Do Kiko and Hannah…Pete (lol) and Lara (lol)…mean nothing to Malia?!) and her low is everything that happened with Hannah. Riiight. Aesha says her high is the whole experience, but her low was her homesickness. And when Andy asks Alex, he explains his high is falling in love with Bugsy (jk…he gets to do a med season now — good for him!) and his low is getting involved in the drama of the season. To be fair, there was so much of it, it was nearly impossible to stay away!!

TELL US — THOUGHTS ON THE LATEST BELOW DECK MED REUNION?