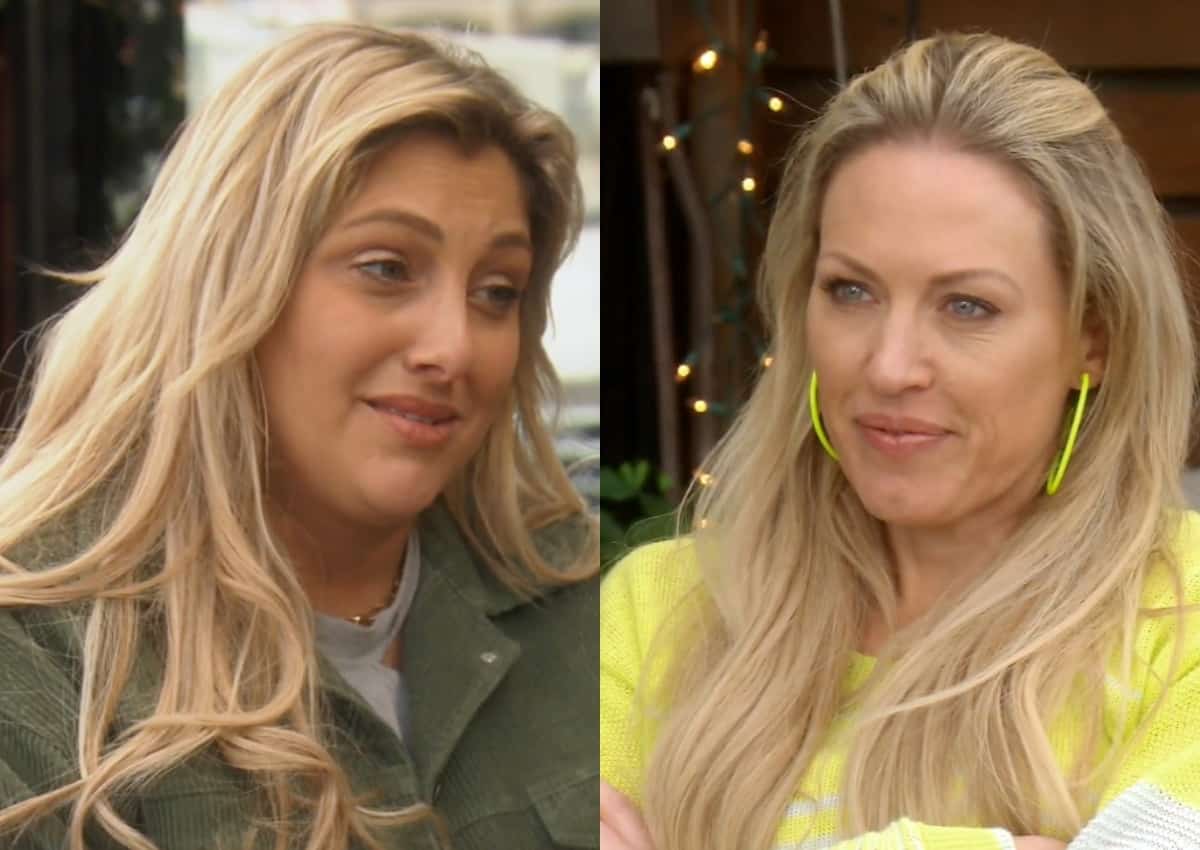 The women are all struggling with issues on this episode of the Real Housewives of Orange County. It’s who they turn to during their time of need that makes it interesting…

The episode kicks off with Emily FaceTiming Gina. Gina is busy shopping at… Walmart? Man, Gina is really showing the viewers allllll of it this season, huh? When Emily brings up Braunwyn, Gina explains that Braunwyn’s “gotta learn to stand up without Sean.” Bravo, Gina. Maybe it should be time for Sean to focus more on his wife’s behavior instead of getting involved in his wife’s drama with friends. Looking forward to what this Saturday date at AA is gonna be like with Braunwyn and Gina…

Kudos to Braunwyn and her family. They are the most supportive, loving group of people. Braunwyn has hired a designer to bring in some snazzy dresses for her son, Jacob, to try on for drag. Jacob is slaying it in the dresses and explains, “I want to do drag, cuz it’s kinda like a therapy” since it has helped get him out of depression. Jacob inspires Braunwyn to be her true self. It is so sweet that her son is her role model, particularly as Braunwyn navigates sobriety.

Gina STILL does not have her license back. She put in her community service and her time at AA meetings so the Ubering end is near. While at her lawyer’s office, she discusses her ex-husband, Matt, and the domestic violence case from last year.  Her lawyer advises her to speak out under Marsy’s Law to help her explain how she feels and to show how Matt’s actions have affected her life.

Gina displays abused partner behavior when she states, “It’s hard to stand up to him.” Gina wants to give a statement as it would be healthy for her — a way for her to see herself as a survivor, not a victim — but she wonders if pretending everything’s okay would be better for all parties involved.

Shannon and her eldest daughter, Sophie, sit down and have a good ole mother-daughter chat about Sophie’s upcoming book. Sophie’s book is all about living through her parents’ divorce and Shannon looks terrified about what’s in it. Shannon worries about how much she “messed” up her daughters, but luckily now they see her in a healthy relationship. Sophie explains that she likes John because her mom needs someone to support emotionally…oh and financially too. Ka-ching!

Braunwyn and Kelly head into the White Dress boutique. It’s almost time for Braunwyn’s vow renewal…for the second time…to celebrate 20 years. It’s a new chapter for Braunwyn and Sean and she states there’s “nowhere I’d rather be” than married to Sean (cuz he fights all of her battles).

Braunwyn tries on gown after gown and even Kelly gets in on the action. Before the ladies leave the boutique, Kelly goes next level when she asks — in front of the store clerks, mind you — if Jacob is doing drag just for attention. Sheesh, Kelly. What does it matter to you what his motives are anyway? Also, Kelly. Know your audience. Don’t ask a newly sober woman if she wants to grab a drink post-shopping.

Elizabeth still has her family here and we see a different side of her. As she talks with her mother out on the deck, we learn that Elizabeth’s sister, Anna, started using heroin at age 14. This would probably explain why Elizabeth is so close with her nieces…considering their mother is a 40-year-old drug addict. Elizabeth also shares that she left a $1 million dollar trust to each of her family members, which leads me to wish I was related to Elizabeth Vargas. #auntliz.

Later, Elizabeth hosts Gina and Shannon at her place. Elizabeth and Shannon are competing on who is the richest biatch in the OC. However, Elizabeth drops down about 75 pegs when she leaves the prices on the food spread. Shannon is aghast! While chowing down, Elizabeth explains that they should all rally and support Braunwyn, but Gina shuts that down fast. Gina shares that she will be joining Braunwyn for AA on Saturday since she court ordered has to go anyway, but she isn’t sure about the future of their friendship. Shannon jumps on that train and makes it known that she is not sure if she will be attending Braunwyn’s vow renewal, considering Braunwyn keeps calling her a liar.

Gina changes the subject to her domestic violence case. It gets heavy fast as she cries about co-parenting despite feeling so pained. She thinks that Shannon held it all together during her rocky divorce, but Shannon disagrees. Shannon explains that Sophie’s book is forcing the past to resurface, which in turn causes wounds to be opened back up. It’s def a bonding moment for the women.

Does anyone else notice Kelly’s foreshadowing about the coronavirus?! She talks about it in the car with Shannon on the way to help Elizabeth pick out her “divorce present…” aka a new car that costs zillions of dollars. Elizabeth states that cars turn her on, and it’s a good thing, too, since she doesn’t sleep with her boyfriend. Who the EF brings friends to watch you pick out the Ferrari you are going to buy? Interesting that Shannon calls Elizabeth’s car shopping as big and flashy, yet her MOTHER drove a Ferrari…

Braunwyn and Gina head out for their AA/apology meeting. Let’s be clear — the only reason Gina came along with Braunwyn is cuz she needed a ride to AA. Boom. While driving there, Gina begins to ask Braunwyn some personal questions. Driving in a minivan always does that to ya!

Braunwyn explains that “Sean has been managing me for so long” and Gina is astounded. This is deep. Braunwyn needs to undo all that damage in her marriage and learn how to function independently. She further states that her easy way out of drinking is to just have another baby, and folks, there ya go — that’s why she has 55 kids.

Meanwhile, over at Emily’s house, a blast from the past comes back: LIZZIE! She comes over to Emily’s to talk bathing suits, cuz remember, Lizzie has a suit line. Evidently, Emily –the attorney, party planner — also loves drawing, and therefore, she has decided to work with Lizzie to design a swimsuit for everyday women. Emily is excited for this new venture and states that she is “unapologetically not a size zero.”

After the AA meeting, Braunwyn and Gina are all smiles. Side note: I didn’t realize how much bigger Gina was than Braunwyn — she towers over her! Braunwyn apologized to Gina while leading the AA meeting and Gina accepts it all. Braunwyn admits she was really trying to hurt Gina. See what happens when you judge people without getting to know them? Gina asks to be re-invited to the vow renewal and promises to not drink while there. This is a huge moment for the women and it seems like a true friendship might be forming.

Finally, Gina’s daughter, Sienna, is having her birthday party and Gina has invited Matt over to celebrate. It’s pretty big of her to invite him after all that has happened. Interesting that this dude would not be filmed, and now all of a sudden, he is showing up? Hm… As Matt plays with the kids and Gina’s boyfriend pastes a fake smile on his face, Gina speaks in her confessional. She has decided to make a victim impact statement about *that* night. Gina is torn, but she is hopeful that if she does this, things will change with Matt. Hopefully, this will help close that dark chapter for Gina…