Home Real Housewives Of Salt Lake City News The RHOSLC Premieres to Lackluster Ratings, Find Out How Many Viewers Tuned In and How They Stack Up With Other Real Housewives Debuts

The RHOSLC Premieres to Lackluster Ratings, Find Out How Many Viewers Tuned In and How They Stack Up With Other Real Housewives Debuts

The Real Housewives of Salt Lake City premiered on Wednesday night, November 11, and unfortunately, the ratings were a bit underwhelming.

While the series’ debut followed a new episode of the 15th season of The Real Housewives of Orange County, which was the first-ever Real Housewives franchise, it failed to crack a million viewers. In fact, it didn’t even get close.

According to a November 12 report from Showbuzz Daily, RHOSLC season one, episode one brought in just 785,000 viewers. Meanwhile, the latest episode of RHOC brought in 1.1 million viewers.

On Instagram, one particular fan page, the Real Housewives Franchise, expressed their disappointment in a Story while sharing a tweet about the series’ ratings.

“Our girls deserved SO much better… I blame Bravo for putting it on at 10 p.m.,” the account stated along with an expressionless emoji. 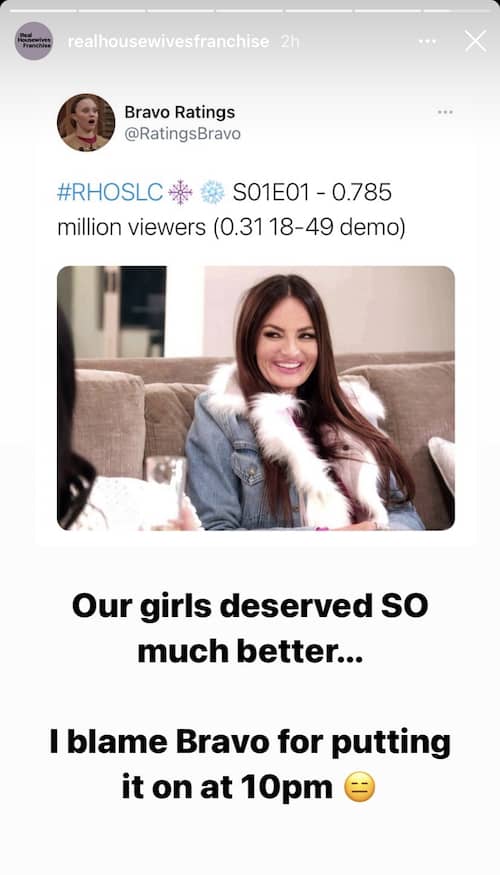 After the post was shared on Twitter, a number of users weighed in, many of whom believed the 10 p.m. time slot led to the low ratings.

The production value and content in this show is amazing. It deserves way better than a 10pm time slot after struggling OC! I wish they would’ve given it a prime lead in behind RHOA.

I am still surprised they chose RHOC to be the lead in for this new franchise considering how bad their ratings are this season. They should’ve waited another few weeks and premiered Salt Lake after Atlanta.

Everyone remember, live ratings don’t matter as much these day. They were on 10PM on a weekday, many will watch on DVR

Even The Real Housewives of Miami, which premiered in 2011 and lasted for just three seasons, garnered 1.2 million viewers during the first episode of its first season.

According to their post, the episode brought in 435,000 viewers, which was just under the amount brought in last Thursday, when Southern Charm stars Craig Conover and Shep Rose appeared. 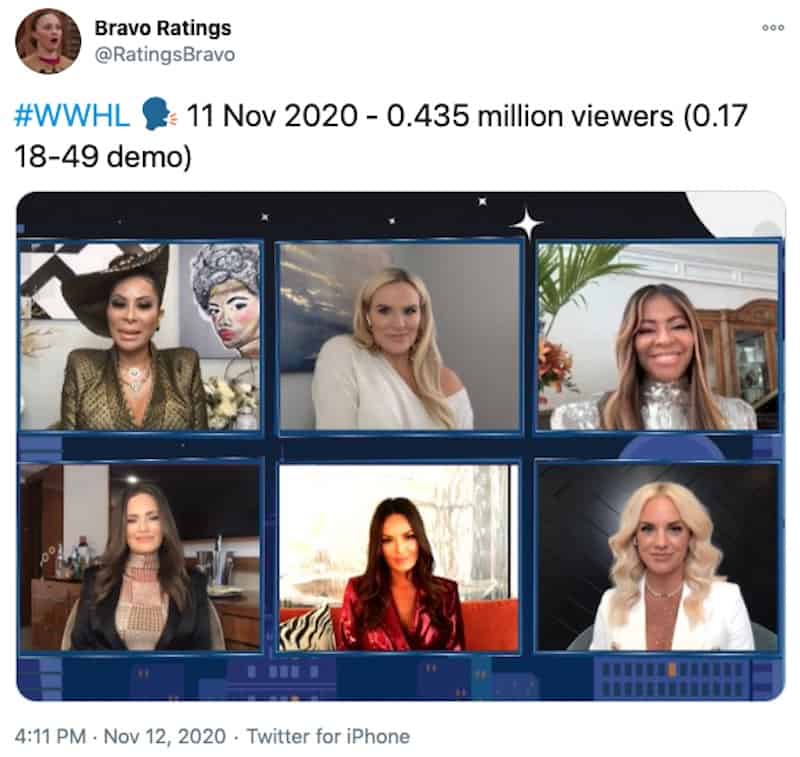