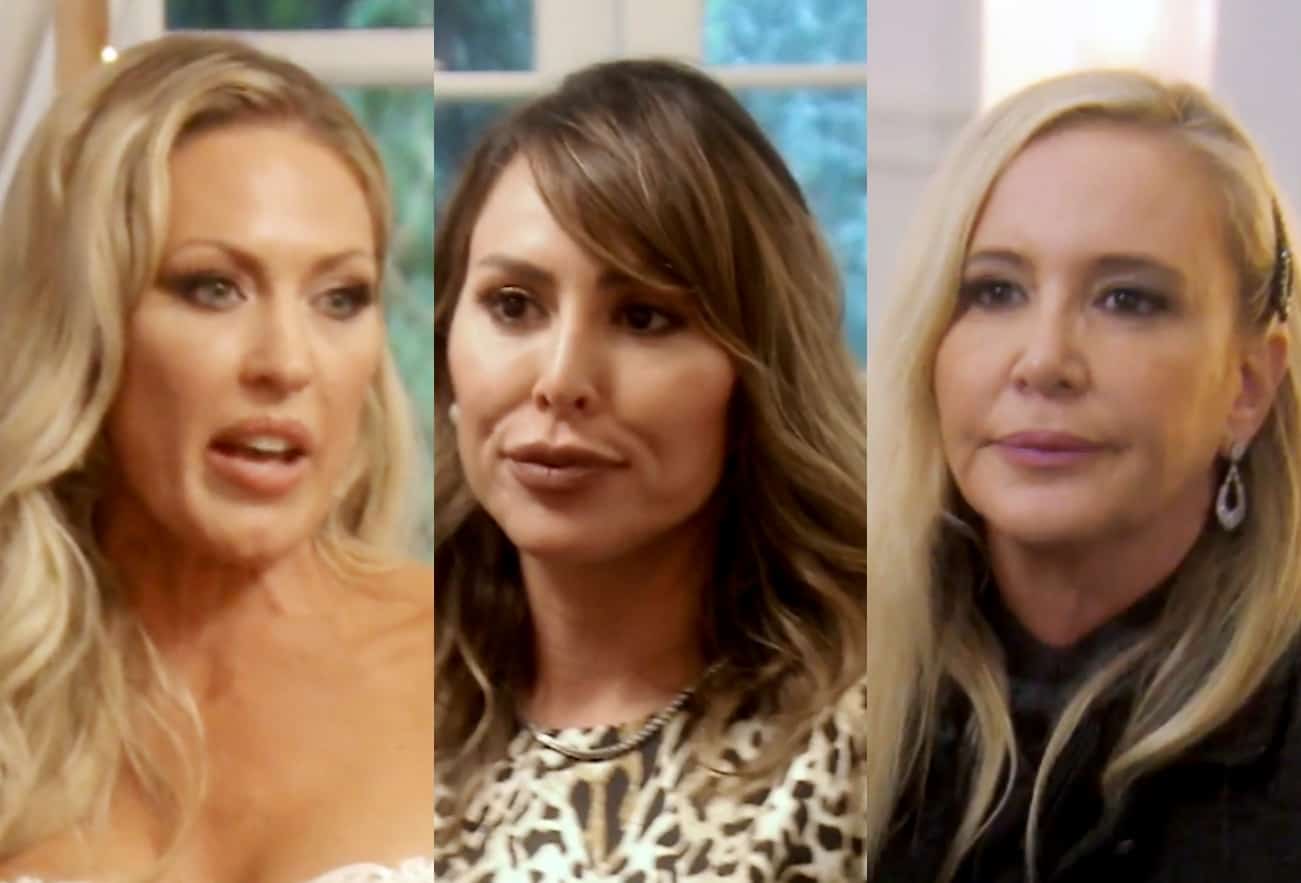 The last thing we all need right now is to see Kelly and Rick Leventhal together in bed talking about their future. Although Rick’s sentiment is sweet, could they have perhaps filmed this in a different venue?! And then just like that, for a moment, I thought Hoda Kotb joined the cast of the OC and I got SO excited. Buuut she was just giving a news brief on the inevitable — the looming coronavirus… Looks like worlds are about to get rocked on this episode of the Real Housewives of Orange County.

Besties Gina and Emily are working out. They’ve basically worked out for 11 seconds and both ladies are already complaining, moaning, and groaning. After they pretend to exercise, they sit down for a water break and Gina talks about her most recent meeting with Matt at her daughter’s birthday party. Lawyer Emily believes that “Matt is a classic narcissist” and agrees to go with Gina when she makes her victim statement in court.

When Braunwyn rolls up to Elizabeth‘s house in her minivan, Elizabeth shouts out, “There’s my bougie b*tch!” The ladies decide that a bike ride would be an AWESOME filming opportunity. Although they are talking about a very serious subject, trying to follow the conversation with a Go-Pro is a bit nauseating. Eventually, they stop pedaling and Braunwyn explains that she’s realizing very quickly who her friends are now that she’s sober. She makes it clear that she is beyond disappointed by her so-called-friend Shannon. Elizabeth can understand how Braunwyn feels since she lost most of her friends once she divorced her bajillionaire hubby.

Regarding Dr. Deb, Braunwyn’s mother, she is set to attend the vow renewal, but Braunwyn still cannot trust her. I am sensing some foreshadowing. Everyone knows that vow renewals on any Housewife franchise are the kiss of death…and a mother with a few screws loose certainly will not help the cause.

It’s time for a group date! Elizabeth, Gina, and Shannon get together with their men and settle in with some cocktails. Shannon shares that she is starting to “stockpile for coronavirus.” I would laugh about it, as the crew is doing now, except, we all know just how serious COVID has become in our world. The group toasts to “no coronavirus!” and all is going well until Shannon blurts out that Gina went to an AA meeting with Braunwyn.

Gina chooses her words very carefully as she explains how the meeting went. She states that Braunwyn was taking her anger out on Gina and Shannon, but Shannon looks shocked to see Gina have a breakthrough with Braunwyn. OF COURSE Shannon makes this about her and claims the Braunwyn situation is hurtful as SHE has yet to receive an apology. Typical Shannon move.

Gina feels that a lot of Braunwyn’s issues stem from her husband, Sean, and Elizabeth says that Sean is the enabler in Braunwyn’s situation. Shannon is not buying it and snarkily states, “If being sober means you concoct stories in your head…” aka she is still claiming her innocence with the whole small house statement.

Gina adds one more tidbit of info to the Braunwyn convo: “She said her trigger is tequila, so she’s not gonna have tequila” at the renewal. Shannon makes it clear that she will be drinking at the vow renewal, no matter what. She believes that Gina and Elizabeth and taking things too far when it comes to Braunwyn’s sobriety. Doesn’t seem like Shannon is being “such a good friend” to Braunwyn now, does it?

Finally, Kelly is out of the bedroom and wearing real clothes. Kelly’s Positive Beverage company is becoming successful, despite the coronavirus canceling Expo West, one of Kelly’s biggest moneymakers. Kelly tells her employees that Shannon is ALSO starting a water line, which def rubs Kelly the wrong way. Competitive much?

Later, Braunwyn’s down in Palm Springs and they stop over to see Dr. Deb. Braunwyn is hoping that by meeting up with her mom the night before the vow renewal, she can smooth over any awkwardness. Braunwyn’s mom tells Braunwyn that she is “not nearly as fun” now that she’s sober. According to Braunwyn, her mother uses her addiction as a “weapon” and her lack of support is upsetting. So much for making things better…

During the van ride, the girls pop bottles (and Shane pops his headphones in) while Shannon talks about David’s new fiancée. Also, after three years, a new hip, and five shots, Shannon unblocks Emily on Instagram. The world is looking up now. Except that Elizabeth keeps talking about her divorce despite repeatedly stating she cannot talk about her divorce. Eyeroll.

As they get closer to the destination, Gina shares that there will be no tequila at the renewal since that is Braunwyn’s trigger. Of COURSE Kelly is as “sensitive as a porcupine” and states, “Why should you punish everyone if you’re an alcoholic?” I mean, you’re telling me you couldn’t switch to a different type of booze for ONE night? It’s not like it’s a DRY EVENT…just no tequila. Off to the liquor store they go…and they get not one, but TWO bottles of tequila because they are insensitive.

They arrive at the vow renewal location (that has Hermes soap, btw) and Kelly walks in with the tequila under her arm and straight-up tells Braunwyn she has tequila, despite it being a trigger to Braunwyn. Talk about a huge FU. No wonder Braunwyn told Gina she missed her! #sobercompanions

When Gina dines on the floor with Shane and Emily at the hotel, they discuss how confusing Elizabeth is. They gossip about Elizabeth wanting to be inseminated and about how she does not even have sex with her boyfriend, Jimmy. This leads to a LOT of questions, so of course, big mouth Gina promises to get to the bottom of it.

Jeez, after 20 years, you’d think Sean would be a little more excited to see Braunwyn in her wedding gown. Shannon hopes that this renewal isn’t a curse for Braunwyn and Sean, but since they are “soulmates” and all, this couple should be juuuust fine. Side note: who the EF dressed this gang?! Emily is the worst offender here.

Because Kelly cannot go a minute without creating drama, she manages to p*ss Shannon off right away. She finds Shannon and yells out, “Hey, Shannon, tell Zach about the water you wanna do!” Luckily, Dr. Deb squeezes her way into the conversation because #filming, but that’s not gonna stop Shannon from freaking out over Kelly’s assumption that she is going after her product.

Naturally, a drag queen is the officiant at this vow renewal. It is very nice as Braunwyn says sweet things about Sean and presents him with a gift. “Sean loves a good statement necklace” and I LOLED when Emily said his necklaces remind her of Survivor. Sean’s ring to Braunwyn sure beats that necklace.

They should have ended the renewal right there because who the hell let Jacob, their son, speak?! Sean running off with a “12-year-old model?!” His questions are uncomfortable and everyone in the audience awkwardly laughs because what else could they do? Braunwyn is beyond proud of herself for getting through this milestone sober and clear-minded.

But, OMG Shannon with this Kelly thing!! Immediately after the ceremony, she runs blabbing her mouth to Emily and Gina. Shannon cannot believe that Kelly thinks she is essentially copying her product idea. Shannon loves making things about herself, and let’s face it, it couldn’t be a housewife event without some serious drama…