Home Recaps RHOSLC Recap: Mary Reveals The Truth About Her Marriage and Heather Opens Up About Her Divorce

RHOSLC Recap: Mary Reveals The Truth About Her Marriage and Heather Opens Up About Her Divorce 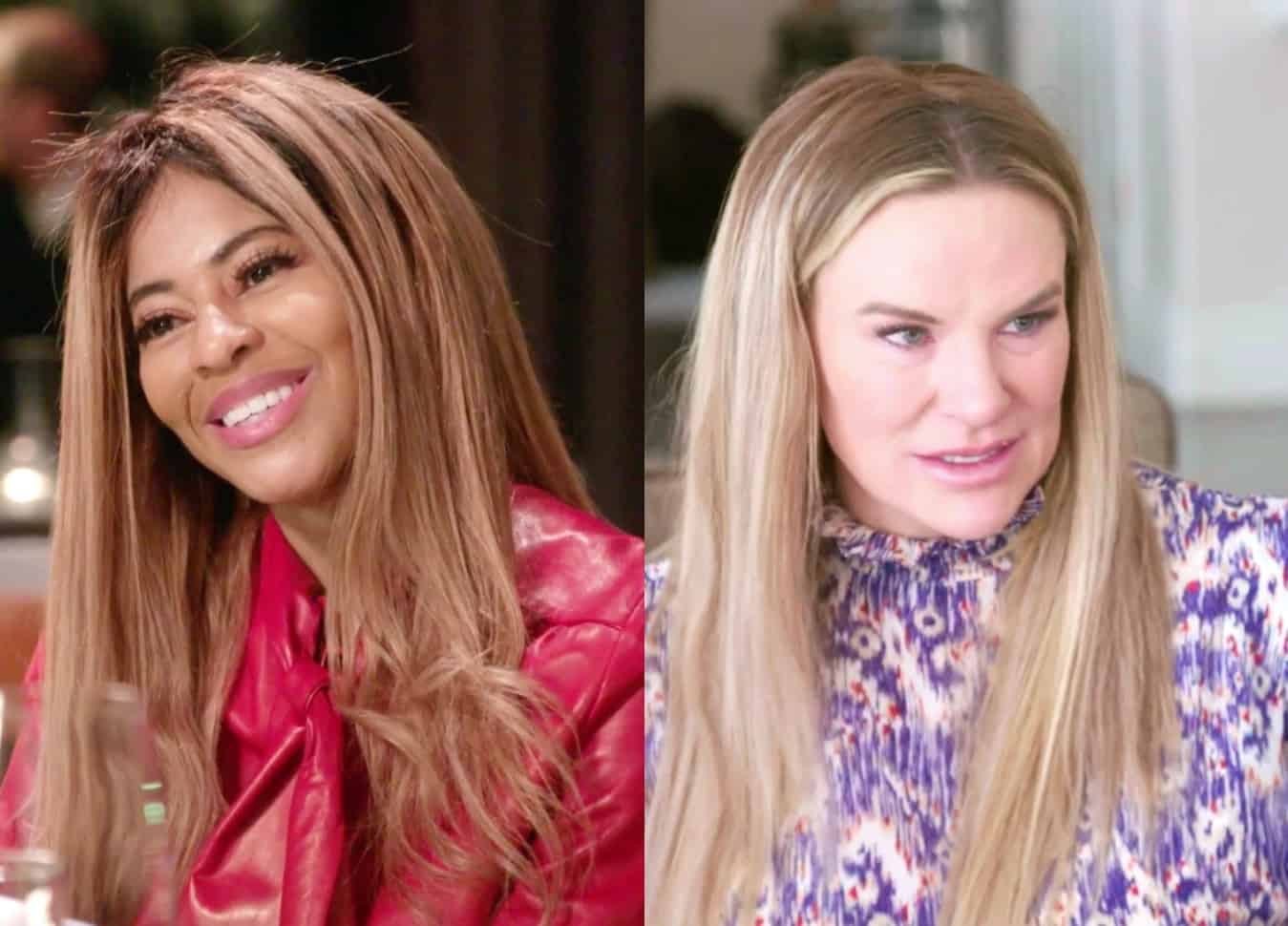 Hello, Blurbers! Happy Thanksgiving to our U.S. readers, and a very Happy, uh, Day to our international friends! In this latest episode of Real Housewives of Salt Lake City, Whitney Rose takes her dad to Mary Cosby’s church and Jen Shah has another meltdown at a party. Plus! I give you the 411 on polygamy, and address a couple of skeletons in Mary Cosby’s closet. We have a lot to go through, so let’s get to it!

Ahh, Salt Lake City. The mountains pop so beautifully when the air clears after a fresh snowstorm. Lisa Barlow is riding around in her car with her husband John and younger son Seth. In the middle of her craving for Diet Coke, Lisa chides Seth about learning the 10 Commandments. “Uh, thou shalt not smoke, and thou shalt not do anything bad,” Seth says, which for a seven-year-old, is fairly impressive. Lisa responds, “Like, what’s bad?”

Whitney walks into an antique shop/speakeasy called Prohibition and tells the manager she wants to hold a wild 20’s party there. The clerk is all, “Hmmm, well everyone was dry during the Prohibition, don’t ya know?” But then he opens a bookcase and voilà! Who’d a thunk there was a bar behind there?

Before we move on, I just have to say Whitney’s dad’s wiggy jet-black hair FASCINATES me. He probably settled on that ‘do in the early aughts and never looked back! Oh, and one other thing I forgot to mention: Whitney claims to have polygamists in her family.

Quick history break: In a state of 3.2 million people, present-day Utah has approximately 37,000 polygamists. But once upon a time, the second president of the LDS church, Brigham Young, had over fifty wives and over 200 grandchildren by his death in 1877. In 1890, the church officially renounced polygamy, and most Mormons discontinued the practice. But in the 1920’s, salty polygamists broke away from the mainstream church and founded their own Fundamentalist LDS Church sects. Most FLDS enclaves have gone underground in remote areas since polygamy is illegal. I hardly ever see them anymore unless I’m traveling down south.

Back to the episode, Heather walks into her house with massive boxes of toy cars on each shoulder (while wearing pumps in the snow, of course) and her business partner Dre in tow. She shows off mini-Range Rovers they just bought for a bunch of clients. There’s been an explosion of pregnancies around Beauty Lab lately, so Heather wants to throw them a White Party (look away, Kyle!) to celebrate motherhood. Jen climbs out of her car with bare sandals (AGAIN) into snow (AGAIN), and meets up to talk about the party.

Five years along, it seems Heather is still reeling from her divorce. She stopped taking pics of her kids for a while, and is still struggling with not having a perfect family anymore. Like I said last week, Heather really seems to be working through some demons, and part of the reason why is that she’s the first family member in four generations to get a divorce.

Back in Park City, Meredith turns on a blender with no top on, and in comes Brooks and Meredith’s daughter Chloe, who’s home from school. They see the mess and are all, “MOH-OMMMM!” It’s a Marks family sitcom! Jen comes over and they bond over their husbands never being around. Jen thinks the remedy to loneliness is throwing a slumber party after Whitney’s 20’s-themed party.

Jen tells Meredith the girls can do each other’s hair and practice high-kicks at the sleepover, which she demonstrates on her back with an open skirt in front of Brooks, who looks like he’s about to vomit. Jen then says, “Even though you birthed these kids out of your vagina, they’re my kids.” Brooks now has flames shooting out of his ears.

Over at Lisa’s McMansion, she’s getting ready to teach her son Jack how to drive. Now’s not a good time for this rant, but I WILL talk to you about Utah drivers someday. Lisa prays Jack will drive safe, and off they go through Draper, on the south end of the valley. After a job well done, Lisa tells Jack to pull into a gas station to get her a Diet Coke. Of course.

Mary and Meredith meet up for dinner at Table X, and Mary is wearing a pink leather, pussy-bowed, billowy top. Mary said she’s going through a thing with Robert (not her grandaddy husband, her son). They were previously inseparable but now that he’s seventeen, he has a girlfriend and is spending less time with Mary. Meredith says she’s never been able to connect with women who are all, “My marriage is perfect, my life is perfect, yada yada yada.” Mary admits she’s a helicopter mom and that her marriage is more of a partnership.

Then Mary claims her MOM wanted to marry Robert (Mary’s mom’s stepdad!), and they disconnected because her MOM was jealous Robert chose HER. She says other stuff that is so fucking weird, I can’t even talk about it right now. Meredith wants to learn more about Mary’s house of worship, and Mary says, “Hey! Whitney’s coming on Sunday. The more the merrier!”

Back at home, Meredith has shaken off her last kitchen disaster and is trying to make guacamole. Brooks walks in freshly coiffed and puts the top on the blender to make his own almond milk. We quickly learn he hates Jen’s guts. Meredith brings up the slumber party, and Brooks trumpets, “WELL THAT’S NOT HAPPENING. Chloe and I are here to spend time with you!” Meredith immediately caves on the sleepover, and Brooks turns his head to the camera and says, “Ya grounded.”

There’s a scene where Mary wants Robert Jr. to go to boarding school in L.A. so she won’t feel threatened by his girlfriend, and I could write volumes about moments in television, but we have to keep it moving!

Whitney escorts her dad Steve to Mary’s Pentecostal Faith Temple Church. She says her dad has had a really rough go of things with his addiction to prescription drugs, but finally had a wakeup moment this year and wants to get sober. Meredith, Whitney and Steve file into the church and find a pew. A live band plays, and Mary rolls out in her vestments while wielding a golden microphone.

While Mary works the room and breaks into ecstatic dance, Meredith looks on with some curiosity and Whitney bounces and jiggles with glee. Mary calls out to Steve, “I know about your problem! Help me, Lord!” Whitney, Mary, and Steve hug and pray together, and Steve looks like he’s having a spiritual moment. This was a very uplifting and touching scene, which makes the next two paragraphs all the more awkward.

So let’s talk about the elephant in the room, yeah? Mary has been recently accused of being up to no good at her church. There has been a lot of gossip about Mary bullying her congregation for money to maintain her BONKERS wardrobe and lifestyle, and some people are even calling for her to be off the show. Much of what I’ve read is hearsay, but as Phaedra Parks would say, “Something in the buttermilk ain’t clean,” because I did a little digging, and out popped a skeleton…quite literally.

Part of this was touched on in last night’s thread, but here are some legal deets with links! After Mary’s grandmother and church founder Rosemary Cosby passed away in 1997, her estate representative, Rosalind Cazares, sued Rosemary’s widow Robert Cosby for forging documents in Rosemary’s name to sign several properties over to Robert. At least one of those lawsuits prevailed because the estate was given $1.2M in damages back in 2005. Mary said she’s been married to Robert for over 20 years, so…[quickly does math]…yeah, this shit is MESSY. So messy that Rosemary’s body was even exhumed over accusations of foul play with her death! (It was determined she died of natural causes, for what it’s worth.)

While you fan yourselves over the sheer ESCANDALO of it all, I’ll just say one last thing about it before we get back to the episode. This could be Mary’s one-and-done season because of all the controversial WTFery, but since the ladies have already filmed, I’m going to carry on recapping her scenes business-as-usual style. You all are welcome to boo and hiss in the comments section, though!

Back at Jen’s, she’s getting glammed up by three assistants at once. She brags about her ‘Shah Squad’, and every Housewife that’s relied on paid friends for company flashes through my mind. She complains to her staff that Meredith bailed on her slumber party because she wants to spend time with her DAUGHTER, like the total MONSTER she IS, and now Jen’s feelings are hurt.

Heather is throwing her white baby party (and I mean white!), and it is one of those events that only (white) suburban moms in a very sheltered state would appreciate. Heather seems genuinely nice though. Jen arrives in a feather coat, and gah, enough with the furs and feathers! There has been so much of each so far on RHOSLC and it’s really disturbing me!

The ladies all sit down with their toy cars and Heather gives a supportive speech to the expecting mothers. While the guests play boring balloon games, Heather, Whitney, and Jen go have a little powwow. Whitney says she wants a clean slate with Lisa, so is inviting her to the 20’s party. Jen makes up some excuse why Sharrieff isn’t coming, and then she waves her talon in Whitney’s face and asks, “You’re not inviting Mary, are you?” Whitney is all, “Yup,” and Jen looks like she’s about to lose her shit.

Whitney pleads Mary’s case and says her dad had an amazing experience at Mary’s church, but Jen just rolls her eyes. Heather tries to stick up for Whitney, but Jen is in picking-sides mode, and she’s not coming to the party happy.

Over at Lisa’s house, Lisa pulls out a Studio 54 dress out of the closet and breathes, “Ess thess 20’s?” to Meredith, who doesn’t have a poker face to save her life, but verbally approves. And over at Jen’s (rented?) ski chalet, she waltzes out to the Shah Squad, and I have to admit she looks pretty spectacular.

Everyone heads to Prohibition and walks through a bookcase to get into the party. There are acrobats swinging around from the ceiling and Whitney’s lipstick looks a goddamn mess. Heather is wearing nearly an identical getup as Whitney, and Meredith comes in wearing…bell bottoms? Lisa makes a remark about Whitney having a thing for the stripper pole, and even though she may be right, Lisa’s mean.

A male cowboy stripper comes out and whips around upside on the pole and the ladies look a little uncomfortable. Jen searches out Meredith, who is talking to Mary – who is donning the second sequined beret and third pair of mini gloves I’ve seen her wear this season – and Jen LOSES IT.