RHOP Reunion 2 Recap: Monique and Candiace Face Off and Ashley Faces Tough Questions About Her Relationship 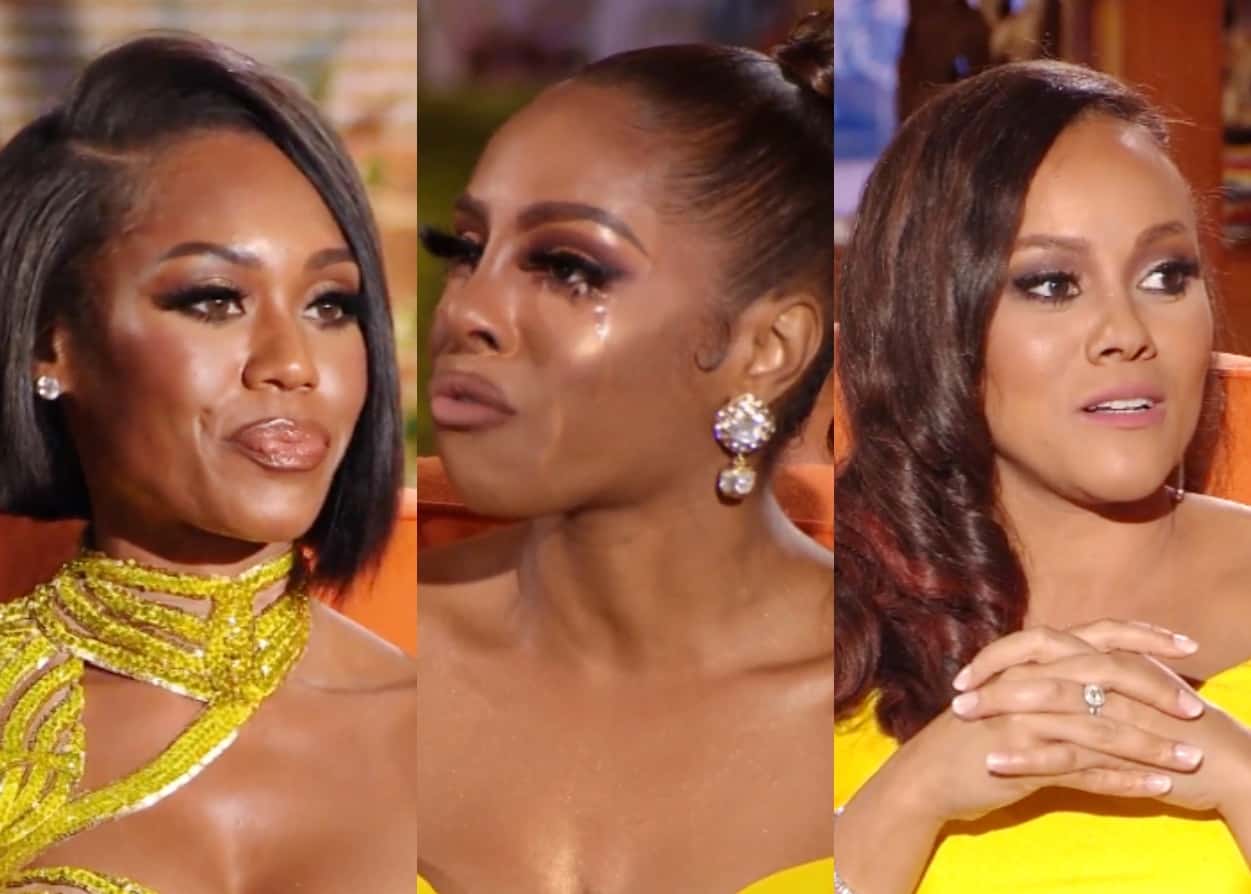 On part two of the Reunion of the Real Housewives of Potomac, we are back for more receipts from Monique’s binder of secrets! What will she expose this week and how will the other ladies respond to what she shares? Let’s crack open that indexed binder of receipts and check it out! Shall we?

We begin back with more about Jamal’s Big D being tossed around Atlanta. Did Gizelle just say she is being transparent about Jamal? Are you kidding me right now? Candiace wants to know if Gizelle is okay with what is in the “thirst book?” Gizelle claims with age she doesn’t allow it to bother her. I call bullsh*t.

Andy inquires if she will talk with him phone stalk him later about what was shared about his side-piece. Gizelle will order him to get out of her phone and face that she, the anointed one, has suffered the wrath from the unholy acts he has perpetrated against her all season. She decides to act all cool, calm, and collected with it and keeps insisting she is just fine. Yeah, she is fine with finally recognizing this was a terrible idea to use this phony storyline this entire season.

The ladies break for lunch and the green-eyed doormats Gizelle and Robyn chat about the shady binder. They can’t believe that Monique put so much effort into creating this slam book. I frankly think they are jealous that neither one of them had the intelligence to come up with this stuff. Monique and my beloved Chris are talking about the Reunion backstage and he claims they have had this intel for years. Wow, so they were just sitting on it waiting for the opportunity to air the anointed one’s dirty laundry? Now that is some patience.

Andy breaks down Ashley’s season and how her life was a bit of a rollercoaster. He thinks she has spent pretty much every season defending her marriage and that actually is really accurate. Ashley has had some bumps and tears. Ew, Andy. He pretends like he cares about their marriage. The open marriage is discussed and she is all nonchalant about it — kind of like how Gizelle is. Don’t you think?

Ashley claims Michael is being a good husband and father. She admits that she has had transgressions in the past too and he has forgiven her. Ashley still doesn’t think Michael had sex with that woman in the hotel room. She insists that Michael is straight. Sure he is. Andy inquires if she was ever with Katie Rost and she claims that is a big no. I am not sure on that one either since Katie mentioned a cast member had a fling with her in a garage. That is definitely not a place to have a sexy romp at all.

Wendy gets called out on the whole baby drama stuff. She insists just seeing Dean triggered her. Wendy really comes across as being really self-righteous this reunion and pretty much all season. I don’t really see her jelling with the other cast members but time will tell next season since Andy really likes her.

Our Grande Dame is asked about the other relationships. She is hoping Ashley and Michael can make it since they will now have two children together. Karen doesn’t feel Gizelle is in the same boat. Her boat never had a safety gap and is faulty as hell. Gizelle calls Karen “phony,” and she retaliates with, “you taught me well, sweetheart.” BOOM, she throws shade right back at the green-eyed doormat!

Andy mentions that there is an old clip of Michael squeezing the a*s of a producer. Ashley is totally nonplussed by this. She defends him by saying it was just playful and the guy called Michael “Daddy.” Okay, Miss Ashley, that might be a little bit of a red flag, honey, don’t you think? Ashley admits she would leave Michael if he cheats on her again. She is debating having a postnup since she is on baby number two. I wouldn’t just debate — I would frankly leave that Reunion and head straight to the lawyer’s office and get that document drafted ASAP!

Karen’s season is replayed and the challenges she had with Ray are brought up. This is a painful part of her season where Ray wasn’t telling her that he loved her. Karen really came full circle this season when she went back home to Surry. She definitely learned to keep her mouth shut after drinking fireballs since she had some loose lips. This group is like vultures with a court reporter ready to take down everything she says when she spills her secrets. Robyn tries to interject her nonsensical comments and Karen shuts her down. She needs to take a seat and stop trying to make herself happen.

Did Andy just ask if Karen has disdain for Ray’s d*ck? What? Karen finds that comment disgusting and so do I. When asked about the tax comments, she admits she was a spoiled brat in the past. Karen will be willing to accept a Zelle repayment, Bitcoin, or even traveler’s checks from Ray, though!

Andy asks about Chris’s income and Monique insists it is solid and he has made good investments. Hmm, why is he inquiring about that? Is it because Chris has been allowing Monique a free cash flow for her “Not for Lazy Moms” podcast?

Wendy gets called out about her coochie box comments. She thinks that is high school locker room talk. Dr. Wendy doesn’t talk like that. Sure you don’t! I remember seeing you flashing your coochie box to your husband on FaceTime while you were in Portugal! Own it, Dr. Wendy!

Why is Andy going in hard on Karen? She admits she was more guarded and putting on airs when her parents were alive. Karen admittedly agrees that she has changed this season and has become more comfortable in her own skin. Agreed, she even has Rhianna giving her some shoutouts on her products. Now that is impressive!

Monique’s season is replayed and we get to see more of T’Challa. She tells them that he flew away for 26 hours. Monique was beside herself over losing her beloved bird but thankful he flew home to his mothership.

We get to see the clip of Gizelle smugly sharing the trainer story. I just can’t with Gizelle acting all superior when she had this information when her house of cards is falling down.

We then get rapid-fire insults from Monique and Candiace. Monique said Chris B. called her bipolar with a light switch. Candiace retorts with, “you were a concubine.” This is a simmering pot of fury right now!

The paternity of Monique’s baby Chase is brought up. Apparently, it was brought up after Andy’s baby shower. Monique alleges her former friend GG approached other cast members to spread this dirt. She claims Charrisse took the bait and that is why she doesn’t want her around.

Andy prefaces the next clip with the disclaimer that Bravo doesn’t condone violence. How can you say that with a straight face, Andrew? For years, Bravo has shown violent behavior among its cast members. If it is so offensive why do they keep airing it on loop? Wendy breaks out into a sweat and needs some water. I think she will need a fire hose to cool this group off while this topic is discussed.

We then get split scenes between Monique and Candiace. She admits to being triggered by Candiace’s hand in her face. She claims her tooth was injured by the broken glass that Candiace had in her hand. Monique claims to have dental records to prove her injuries.

Monique tries not so valiantly to defend going back inside to get Candiace when she heard her talking more smack about her. She thought if she was going to be fired she might as well finish her off. I have to admit, I did cringe when she said that. Girl, please own your sh*t!

Candiace gets emotional when Andy asks about when she saw the footage. She has her makeup running in lines down her face and her little square tissue isn’t cutting it. Candiace is not okay and isn’t over what occurred. She is troubled by the fact that her friend Monique did this to her.

Candiace claims she was battered by social media. She said posters said she deserved it because of her words. Candiace needs a break and walks off the stage. Andy calls Monique out on her lack of reaction to the incident. He can’t believe how unemotional she is to this incident.

This whole episode was supposed to mitigate the damages from the violent encounter and there is still no accountability on either side. Monique isn’t accountable for her violent act and Candiace doesn’t own that her words, “Are you gonna drag me?” have baited her to drag her.

Ashley and Gizelle have chosen to keep moving forward in their relationships even though their significant others have made a mockery of it. Yikes, this is a merry go round of dysfunction all around and I don’t see anyone getting off this crazy ride anytime soon!

As Candiace walks away sobbing we have a to-be-continued…

Next week, we have the final super-sized episode with the husbands in the room except for Juan, Jamal, and Michael, of course. Yeah, you know the ones who have a lot of questions to be answered? Let me know in the comments your thoughts on this episode. For those of you who celebrate Christmas, have a very Merry Christmas!