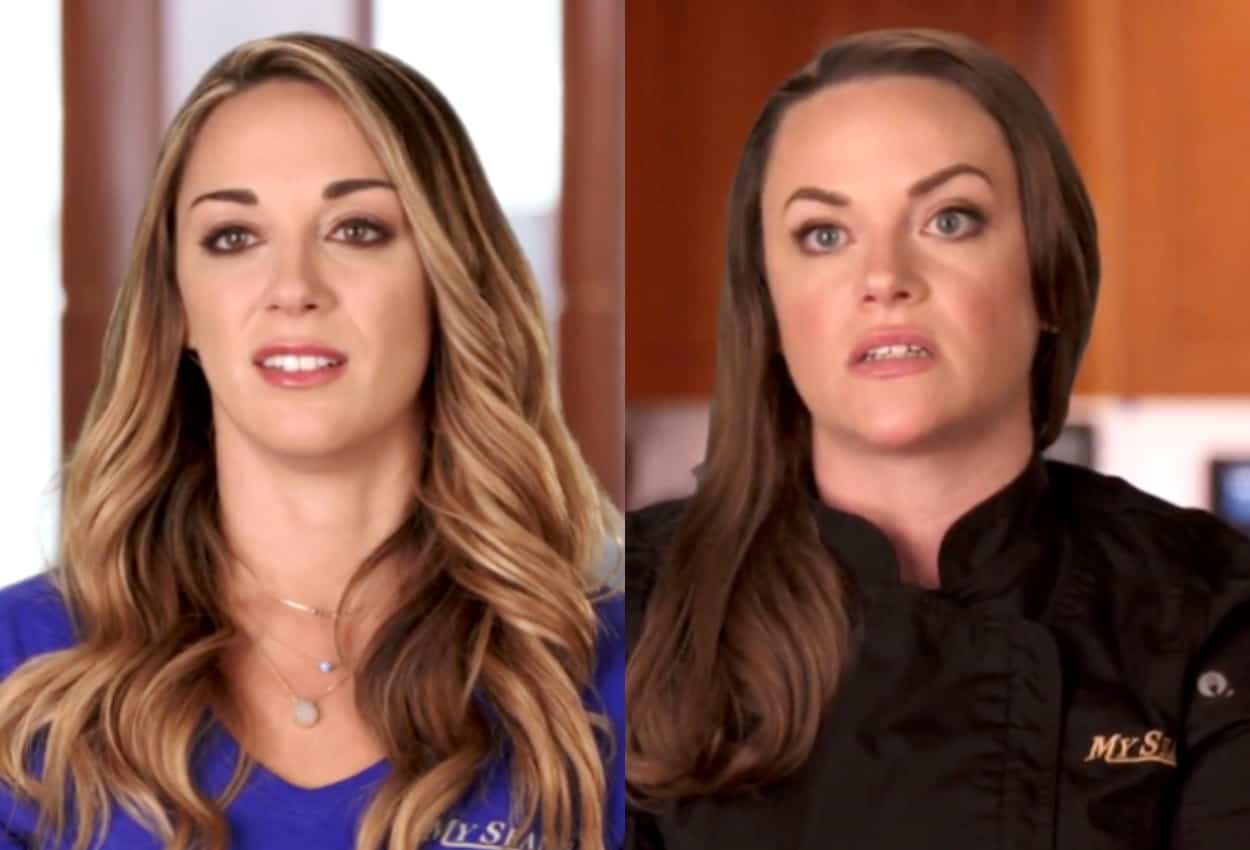 A demotion, a hook-up, and a 10-course meal. All that and more on this episode of  Below Deck.

Francesca is doing her best to get Elizabeth replaced. She can no longer handle Elizabeth’s lackadaisical behavior and is tired of giving her chance after chance. Captain Lee is not sure a replacement is the right answer but tells Francesca to do “what you have to do.” Francesca is feeling the pressure. According to her, Elizabeth does not deserve the second stew position and her time has run out.

In other news, the flirtation between Rob and Francesca is so awkward. Their discussion about fly-fishing seems so forced and I really wonder if Rob is a robot. Who is he and where did he come from?

As Izzy and Elizabeth clean up the beach picnic after the guests return back to the yacht, they decide *they* deserve a dip in the water, too, just like Francesca and Ash. Elizabeth is rejuvenated by this, and it reminds Elizabeth of “who I am and what I want out of life.” Huh? Jumping in the ocean sure cleared Elizabeth’s mind. Perhaps she should do it more often then. Could potentially spark her work ethic…

Rachel’s got a big night ahead of her. She’s responsible for a 10-course meal. In case you didn’t feel like doing the math, that’s 60 plates of food. Wowza. Despite the stress, Rachel is pumped and prepped for French night on the yacht. And so are the stews and the guests, who are donning stereotypical “French” outfits… if we can even call them that.

Although Rachel is behaving like she is full of rainbows and sunshine, she cannot be trusted. Even Captain Lee explains that Rachel is so insanely unpredictable that he hopes she doesn’t “get a wild hair up her a*s” to make the whole thing go up in flames. Seems like Rachel and Captain Lee are slowly rekindling their trust — I mean, Rachel DID feed him a strawberry…

“I’m gonna f*ck this 10-course meal in the mouth.” Rachel is back, ya’ll. The guests are going gaga over her courses… they are even falling over the palate cleanser! Sure, Rachel knocked this service out of the park, but does she really deserve to keep her job at the end of this charter after the way she spoke to Captain Lee? Side note: How in the world do these guests eat 10 courses and then hop in the jacuzzi/go to bed?

Elizabeth and James continue their flirtation as they are the only two up for the late-night crew. Elizabeth calls James an escape and he flirts with her like crazy. They are bound to hook-up in the very near future…

It’s the final day of the charter. TBH, I thoroughly enjoyed these guests and am sad to see them go. They were not nearly as cringeworthy as their preference sheet made them out to be!

It wouldn’t be an episode if there wasn’t docking drama. Here we go again. Captain Lee is preparing for apparently the world’s most difficult parking job. Eddie is extremely nervous about this and is running around like a chicken without a head trying to train his deck crew in 11 minutes. It’s no surprise that Captain Lee nails it. He is the best.

Bryan, the primary, is “overjoyed with the talent of” Rachel and then hands over a thick envelope through tears. Yup. You read that right. Everyone gets right to work and Francesca gives Rachel some praise for making the guests so pleased. Captain Lee is proud of the crew, and their success was celebrated by a $2,250.00 tip. Rachel apologizes during the tip meeting, but she knows she isn’t going anywhere because, let’s face it, Captain Lee is blown away by her cooking talents.

Captain Lee lets the crew know that they are invited to visit a donkey sanctuary before getting back to work, and as ridiculous as a DONKEY SANCTUARY sounds, I would rather visit that than scrub a yacht down any day. I love that Captain Lee is “taking his jacka*ses to see jacka*ses.” It’s pretty cool to see these 150 donkeys kept safe and thriving.

No surprise, but Captain No Fun Francesca stays behind on the yacht to meditate. She tries to concoct a way to light a fire under Elizabeth’s a*s. She is stressing herself out, and so upon Elizabeth’s return from the sanctuary, Francesca calls her for a meeting.

Francesca has the SAME CONVERSATION with Elizabeth that she has been having with her charter after charter. Francesca demotes Elizabeth and Elizabeth feels like it’s more personal than business. To be fair, Francesca has told Elizabeth time after time what she expects of her in her position, but Elizabeth keeps f*cking up. Elizabeth claims that she is in shock, but really, this demotion did not come out of left field.

Izzy comes to Elizabeth’s bunk and hears about the recent drama. Izzy does not hold back when it comes to Francesca. It is very clear she did not enjoy her time working for Francesca, and she claims Francesca is “so two-sided.” Izzy gets BUSTED when Francesca overhears her talking about sh*t. Izzy, girl. You have to learn how to WHISPER. Izzy doesn’t seem to be afraid of Francesca and that’s quite refreshing, considering Elizabeth looks like a deer in headlights.

Later, the crew preps for a night out. Rob, Eddie, and Izzy talk about age and growth and Izzy drops something heavy. She explains that she had a breakdown, and when the guys ask her about it, Izzy explains she was sexually assaulted. She talks about coping mechanisms and how she has grown from the incident, and I think everyone looks at her with even more respect after sharing her story.

In the words of Ash, seems like some of this crew is about to get “litty-titty” tonight. At least Rachel is 100% on board with that statement. Rachel explains, “72 hours ago, I quit this son of a b*tch.” And when she returned, she KILLED it. Therefore, to celebrate, Rachel has decided to get absolutely wasted. What is actually wrong with her? Eddie simply cannot stand Rachel. She is behaving obnoxiously, and he is still irritated that she quit and then came back, no questions asked. He doesn’t understand how everyone could simply forget how quickly Rachel was able to drop her crew, but I guess his loyalty is bigger than most.

The night wears on. The crew heads to a club post-dinner and that’s when things always get messy. James and Francesca make sexy eyes at each other, and Francesca finds herself interested in Rob. Which, BTW, is hilarious, considering Rob can’t even keep Francesca’s name straight. He is also socially awkward. He actually said,  “I think Francesca’s pretty neat.” Yea, he is def a robot.

The gang heads back to the yacht, and James and Elizabeth find themselves in the hot tub. It doesn’t take long for them to partake in a serious game of tonsil hockey while Rachel pokes around drunkenly in the kitchen eating stale toast. The episode ends with (I think) James saying, “so f*cking tasty,” but for all we know it could be Rachel whipping up a quick drunken bite. What we do know for sure is that this hook-up is def going to make things more interesting onboard…