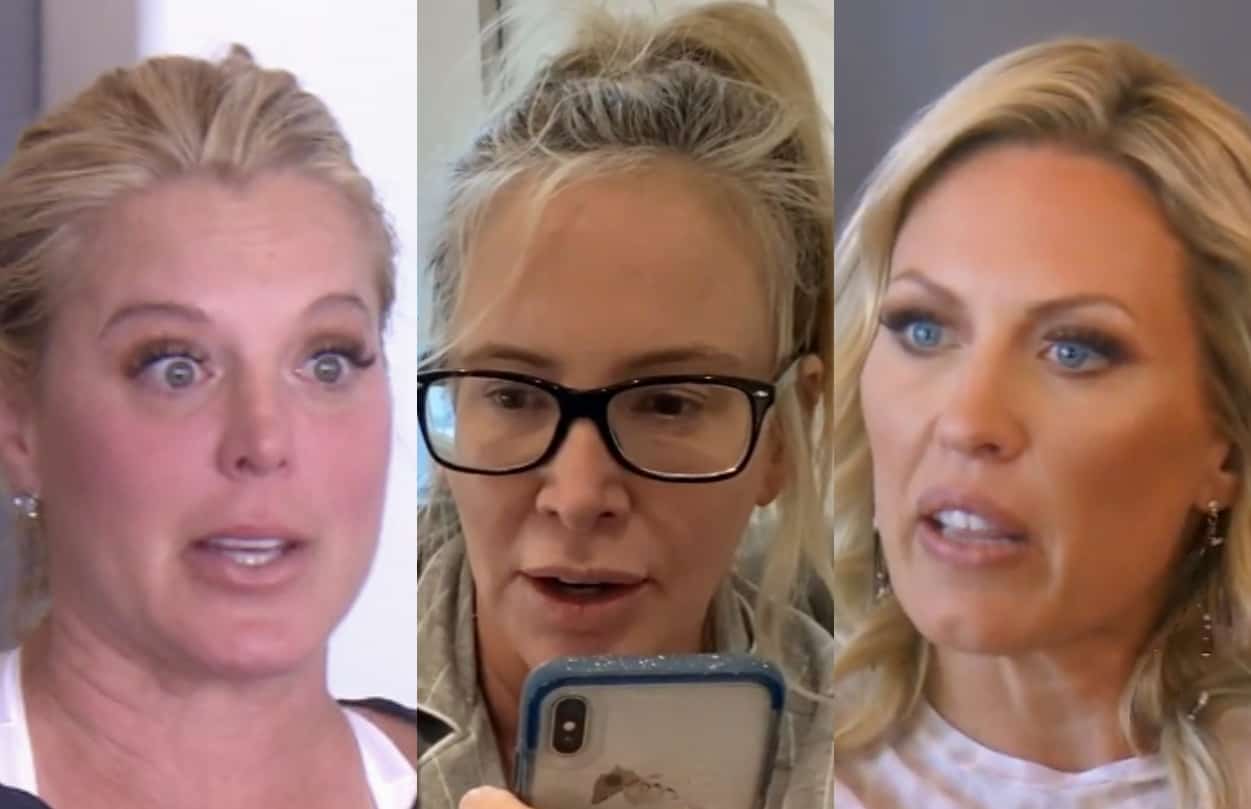 A dark past gets brought to light as the pandemic forces the women to have a reality check on this episode of the Real Housewives of Orange County.

Look at Braunwyn coming through with the panic attack calming methods for Elizabeth. Homegirl straight lost her marbles right after she slipped and said she was part of a religious cult growing up. After catching her breath, Elizabeth makes it clear that her background is not her fault: From age 0-13, she was raised in a church that restricted her every move.

Elizabeth states that “it was easier to live in a fantasy of happiness” than talk about her dark past, and I am starting to feel like Elizabeth and Braunwyn have a lot more in common than they think do. Elizabeth tells Braunwyn she would get locked in a closet for talking too much and she actually got kicked out of the church because she told neighbors about what was happening. The FBI eventually got involved! CRAZY stuff. The strange part is that Elizabeth is concerned that Braunwyn may think differently of her now, but Braunwyn has a newfound respect for her. Braunwyn states that she has to make it right between her and Elizabeth and that she feels really guilty for snooping around her finances.

While all this heavy-duty stuff is happening, Gina and Kelly are “fishing.” I’m using quotes because they actually have NO idea what they are doing. Little do they know that they are about to get slammed with Elizabeth’s story…

John and Shannon are trying to get on the same COVID “timing,” so John essentially kicks her out of his house. Shannon is already positive; John is just in limbo, awaiting his inevitable positive test result. Shannon is less than pleased to be separated from John for this “long” of a time (14 days) and is not super thrilled to have to be back with her kids, no matter how much she tries to sell that she is.

Two days into Shane’s hospital stay and he seems like he is doing better. Emily is still doing an awesome job of holding down the fort and keeping the kids busy, but it is a LOT of work. Maybe she should give Shannon a reality check. I mean, Shannon’s life is also COVID-affected, but Shan has her priorities all out of sorts. She’s exhausting talking about John and how sad she is to be away from him. Along with her ‘tude, perhaps she should lose that ridiculous hat? Shannon talks herself into returning home: “On the positive side, at least I’m coming home.” Too bad Shannon’s kids have been running amuck during their COVID quarantine.

Elizabeth and Braunwyn make their way back to Kelly and Gina, and although Elizabeth “doesn’t wanna talk about it,” she wants to be sure everyone knows she is upset. Gina tells Elizabeth it’s hard to get to know her and Elizabeth comes clean and states that’s because she is “embarrassed” about who she is. It doesn’t take long for Elizabeth to share her story about the molestation by “many men” while growing up, FBI, and cult-upbringing from the age of “zero to 13.” Elizabeth unravels and talks about the guilt she holds. She also tells the women she has a “f*cked” up brain. This opens a new side of Elizabeth and walls have def been broken down.

Even worse for Elizabeth, she reveals that while she was a kid, she ended up telling a neighbor what was going on. That neighbor told others and the FBI ended up getting involved to shut down the cult. But sadly for Elizabeth, she ended up feeling guilty for being the one who broke up the cult and suggested her father blamed her for tearing apart their family as the cult was being led by her grandmother.

The ladies have decided to rock their face shields while cooking again. Elizabeth has also decided to only wear half a shirt again. She is feeling light as a feather now that her dark past has been brought to light. Kelly is cooking enchiladas, because she is Mexican, and she even phones her father to prove it during her confessional. Glad she was listening to her dad teach the family history…

As the ladies whip up dinner, Shannon phones them to let them all know she has tested positive. Braunwyn is now sh*tting her pants… and so is Kelly… as they were JUST with Shannon. Shannon is, naturally, more upset about not seeing her boyfriend and really doesn’t allow for much else to be discussed. Elizabeth shouts some advice Shannon’s way: “Stay healthy, get over it, and let’s go out after.” I’m sorry… what?!

Selfish Braunwyn gets scared enough to call her husband, who she actually hates. She demands to know the symptoms of COVID and makes Sean Google all the information for her. On the topic of selfish ladies, Kelly is stealing the spotlight. She says dumb things like: “See, I knew she had the Rona. I’m glad she didn’t come,” and, “If you have O blood, you’re bulletproof.” Um, no, Kelly.

As the women pack up, Kelly is insisting that she get married on 10/10/2020 and refuses to let “some virus” get in the way of her marriage to Rick. They’re going to Napa and that’s that.

Over breakfast, Braunwyn talks about her quarantine wife, Shari. She is very important to Braunwyn and has been staying with her family. Interesting…

Maybe some of these ladies should have been a litttttle more careful. COVID is hitting very close to home for them, as Shannon’s daughter struggles and Shannon talks about her symptoms. Kelly is just p*ssed cuz she can’t go to NAPA during a PANDEMIC. Kelly states that this news is “killing my vibe.” Sorry?? When a COVID nurse calls Kelly to tell her she has to “social isolate” for the next 14 days because she has come in contact with someone who has tested positive, Kelly really starts to rethink the way she looks at the virus…

One week later, and Shane is JUST coming home. This time apart has made their relationship stronger, and Emily admits that she wants to do this life with Shane as her partner. She is so happy he is coming home after eight long days in the hospital. Pretty sure the last thing Shane wanted when he got in the family car was Emily’s iPhone in his face, but he does seem happy to be home… he even manages to crack a joke at Emily’s expense, too.

Shan wants to hear the scoop on the girls’ trip and talks to Kelly. Kelly lets Shannon know that Braunwyn threw her under the bus regarding digging up Elizabeth’s past. According to Kelly, Braunwyn said that the information about Elizabeth “was brought to me on a silver platter.” Translation: Shannon gave it to Braunwyn. Leave it to Kelly to stir the pot, but Braunwyn, in Shannon’s eyes, is a liar.

Wait, did Elizabeth just say she was going to eat the same thing as her dog? That either means her dog eats like a king or she eats like… a dog. As her boyfriend, Jimmy, prepares the meals, Elizabeth talks about how hard of a time she’s having now that her background is fully exposed. Jimmy wonders if Elizabeth will be able to heal now and I am getting therapist vibes from him… not boyfriend vibes.

Okay, so let me get this straight. Braunwyn is so afraid of COVID, but she plops right down next to Emily on the sofa inside her house. Granted, Emily already had COVID, but still. Safe practices, ladies! Emily talks about her experience with the virus and also gives credit to Shannon for being a good friend throughout the COVID craziness.

Braunwyn talks a little about the trip and how she stayed in a separate hotel from the ladies. Kudos to Emily for saying, “It’s not about you, Braunwyn.” Obviously, Braunwyn grabs at the opportunity to talk about her friend, Shari. Sooo, Sean doesn’t like all things in threes, huh? Seems like he is a little jealous about Shari coming to live with the fam. Emily recommends that if Sean is unhappy about the living arrangements, maybe Braunwyn should make some changes. Braunwyn states that “not drinking has changed the dynamic” of her relationship with Sean. Emily does her best to try and get to the bottom of the real Braunwyn. It seems very messy, but when Braunwyn admits, “I’ve created this perfect life, and I’m not feeling it,” and that when she closes her eyes, Sean doesn’t have a “starring role,” it is very clear just how bad things are.