Home Below Deck Below Deck Reunion Recap: Elizabeth Slams Francesca And Ashling As Bullies, Shane Gets The Chance To Explain Himself And Rachel Admits To Being Hard To Tame 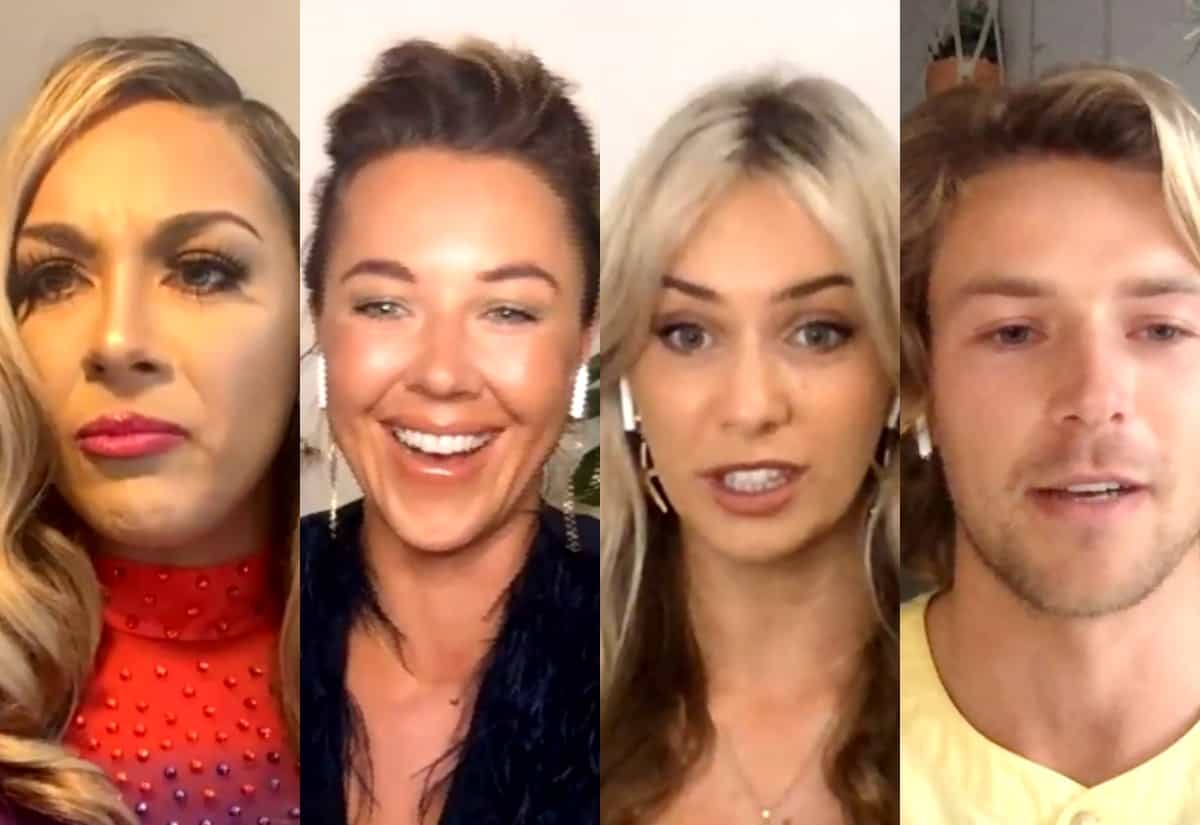 It’s a Zoom reunion… everyone’s favorite. Andy is holding it down in the clubhouse, reviewing this season of Below Deck that was cut short due to the pandemic. We are graced with the whole crew, even those who got canned during the season, and boy, do they have a lot to say!

It’s nice to see some of these familiar faces again. Eddie‘s beard is a great look on him and Captain Lee looks like the bass player of a groovy funk band with those tinted shades. Love that he is promoting his book by precariously placing it in the background. BRB — gonna go buy it.

Rachel is quarantining in Italy, and Elizabeth looks like an Olympic figure skater. No, but really, what is happening? It is evident she was going for a revenge look to try and make James jealous, but girl, you’ve outdone yourself here… Ashling has apparently forgotten that tonight was the reunion, as she looks ultra-casual, as opposed to Izzy who is looking like a supermodel in her gold sequins. Speaking of gold, “Rob is in Fiji digging for gold,” and Izzy makes it very clear she couldn’t care less about that “weak” guy. Almost forgot about Francesca because she is the quietest chief stew ever, but she does look rather stunning considering it is 4 a.m. where she is.

Oh, Sunshine Shane… remember when he would sleep and make mistakes on the reg? Sigh. He made Elizabeth look like the world’s best crew member. Shane claims he was giving his all the entire time he was on the yacht, but he explains that he didn’t realize just how much work went into the whole thing. Shane refuses to be roasted by everyone during the reunion and Eddie apologizes for saying “you can’t fix stupid” about Shane. How ’bout Andy asking Shane about the sustainability of yachting? Shane mumbles how he did his best to make better changes on deck, Elizabeth calls him an “inspiration,” and with that, Shane throws up a peace sign and reminds us all to #staysustainable.

Chef Rachel. Although she is a master in the kitchen, we can all agree that she is something else, huh? Between her phrases (ahem, “eat my cooter”) and her drunken antics, she managed to even leave Captain Lee “astonished.” Rachel tries to explain that she was in no way trying to screw the crew by leaving, and Eddie’s skepticism no longer lingers about her intentions. Of course, Francesca believes that working with Rachel was a bit like walking on eggshells. (Francesca never takes responsibility for anything…) Rachel admits that when she drinks she becomes hard to handle, and Eddie explains his frustration with Rachel’s wildness. She laughs through it all and lets everyone know in the future she’d “bring snacks and a pillow” so she “can take a nap” before she spirals out of control.

Cringing as we review the Elizabeth and James saga. Rachel claims that Elizabeth was an “activity” for James, but James believes that he thought he and Elizabeth were on the same page. Elizabeth tries to make a cutesy face the entire time, and it’s clear she is just staring at herself in the camera (is that how you *smize*??).  James hates using the word “relationship” to describe the situation with Elizabeth, and Captain Lee translates it to “a one-night stand.”

Elizabeth tries to explain James invited her to “sleep” in the cabin, and even though they BOTH knew it was a huge no-no to spend the night in a guest cabin, it was well worth it. Captain Lee just quietly looks on in awe and wonder throughout the entire segment, definitely wondering how two people could be so dumb. Izzy claims it was a double-standard for Elizabeth to get fired and James to simply get a light talking to, but let’s be real. This was Elizabeth’s like… 75th infraction. I think she ran out of chances and this was the last straw for her.

So. Is Rob really digging for gold or is he just terrified of being confronted by Izzy? Apparently, Rob doesn’t watch the season and that would be so on-brand for him.  Funny to reminisce about James and Rob’s bromance… even Izzy would “ship it” if they hooked up. LOL.

Eddie states that he promoted Izzy because she actually put the effort forth. James and Rob had no interest in more responsibility and that really made Izzy shine as the MVP of the deck team. The boys are far too old to be condescending and rude to Izzy just cuz she has a title. But the deck crew wasn’t the only rocky patch on this yacht… the interior is a whole other story.

Francesca comes in defending herself this reunion (when she finally speaks), and she tells Andy to “listen to my words” and agrees that there wasn’t a lot of positivity given toward Elizabeth. Francesca and Elizabeth are like oil and water… there’s not a chance they would ever get along. On one hand, Ash thought they all worked well together, but then she arrogantly tells Elizabeth that maybe yachting just isn’t for her.

Francesca jumps on this and talks very condescendingly to Elizabeth. It could not be more clear that Francesca is straight exhausted with Elizabeth and I don’t blame her. When Elizabeth calls Ash and Francesca bullies, Captain Lee chuckles. Francesca reminds Elizabeth that she talked behind her back, too, so she better slow her roll with this name-calling.

Elizabeth is less than pleased with Ash since Ash called her a lost cause. Francesca reminds us that bullying is an extraordinarily strong word and that some other crew members were pushing the limit. Captain Lee sides with Francesca, because of the two, she is def more in the right here. Elizabeth tells the captain that some of his opinions are “biased” and she feels as though he never got to see much of her work… mainly because she hardly ever DID work, besides poisoning the crew with mustard gas or flirting with James. Captain Lee states that going into the guest cabin was the last “slap in the face” for Elizabeth, and the rest is history.

Elizabeth was happy that Rachel stuck up for her with the birthday cake scandal and states that watching them dig in “looked a bit freaky and malicious and kinda creepy.” Even though Rachel always defends Elizabeth, she can understand why Francesca insisted on firing Elizabeth. BUT, she believes that Elizabeth should have just finished the final two charters. BTW: What world is Elizabeth living in? Telling Francesca to trust her so she can rest? Elizabeth claims if a person is genuinely sorry, she forgives her, and therefore, all is good between Elizabeth and Francesca for the time being.

This feels like Andy is holding a couple’s therapy session when he asks Elizabeth and Francesca to find one positive thing about each other. Francesca explains that she had a “couple of laughs” with Elizabeth, and Elizabeth talks about some BS good thing about Francesca. Before this wraps, Andy spills some tea: Josiah was waiting to come in when Elizabeth was let go? HE WAS GOING TO BE HER REPLACEMENT?! Damn, COVID!

And with that, it ends. It’s a good thing too because, evidently, Elizabeth has got to get to the Olympic skating rink ASAP.

TELL US — THOUGHTS ON REUNION EPISODE OF BELOW DECK?