RHONJ Recap: Gia Tells Teresa to Apologize to Jackie as Teresa Threatens Jackie Who Skips Trip After Cheating Rumor; Plus Melissa and Jennifer Make Up 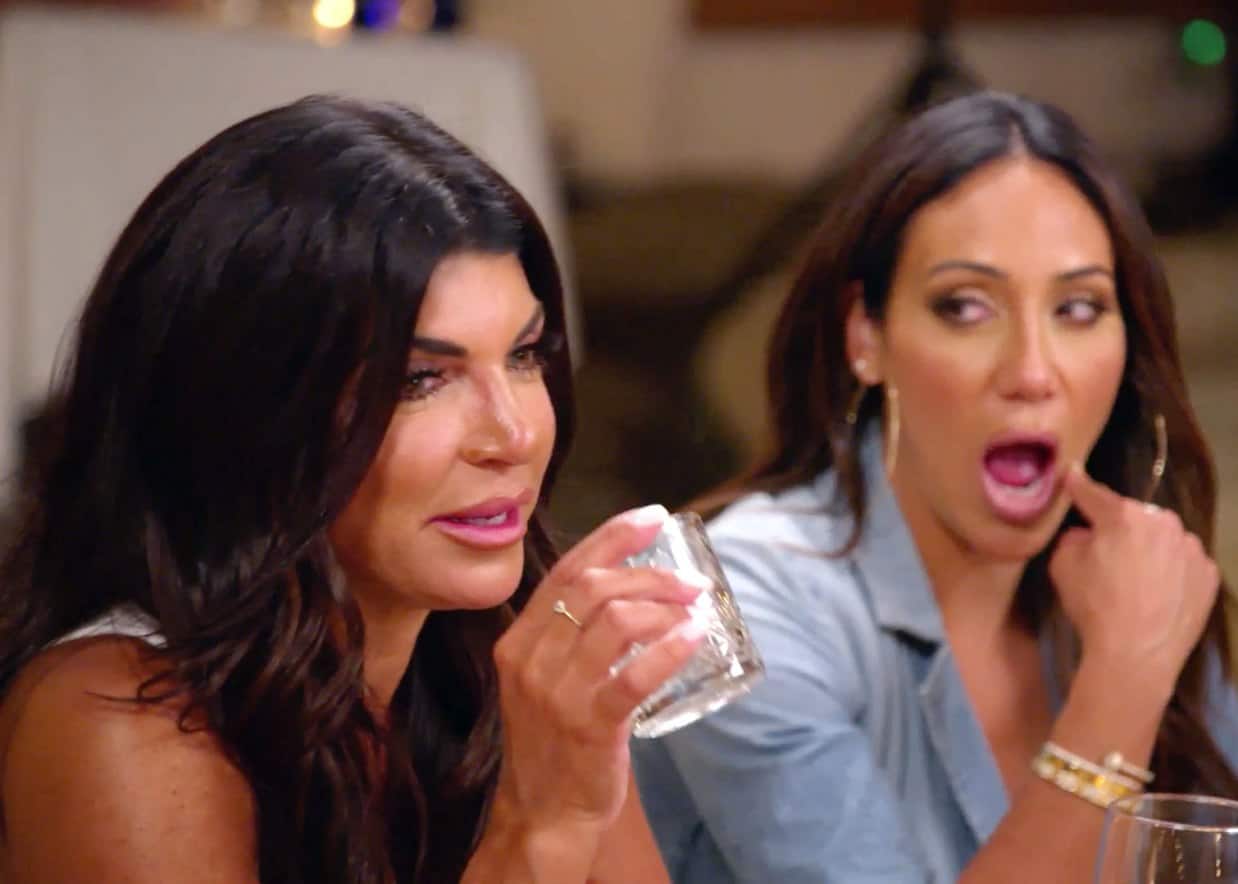 We are dealing with the aftermath of Teresa and Jackie’s blow-up last week on The Real Housewives of New Jersey. Jackie took it too far last week to make a point with Teresa by using an analogy with Gia. That analogy went over like a lead-filled balloon. How will these ladies co-exist after this drama? Let’s find out, shall we?

We begin this episode with Jackie telling Margaret what she said about Gia. Margaret thinks that Jackie didn’t know her audience, and you don’t use analogies with this group. She thinks she made a two-for-one miscalculation of who she is dealing with. Jackie states that she will never be in Teresa’s presence again. I am sure that sentiment is the same with Teresa and this was definitely a producer-driven scene. The streets were not who told Teresa this fable but a producer in her ear.

Teresa calls Melissa, who is celebrating Antonia’s birthday, and shares what happened with Jackie. She obviously is clueless that it is her niece’s birthday. Teresa defends sharing the story about Evan because Jackie is a strong woman and can handle the truth. She tells Melissa that Jackie accused Gia of using cocaine. Melissa knows Teresa way too well and automatically thinks she took it out of context. Teresa admits that she blacked out and will demolish her “girlfriend.”

Jennifer goes to visit Josephine with her daughter, Olivia. I love how Josephine will only share the broken cookies with Jennifer. Maybe being broken is some sort of metaphor for their relationship?

Josephine won’t call her grandson John since he is named after her husband. She thinks he is turning everyone against her. Josephine tells Jennifer that she didn’t see how he treated her behind closed doors. They had an arranged marriage that wasn’t very loving. Jennifer defends her dad and wants both of her parents to maintain their distance for now.

Dolores visits her mom, Valerie, and brings over some food. Valerie misses her 15 grandchildren and it is really endearing to hear how close they all are to their grandma. Dolores tells her mom how David is emotionally unavailable. Duh-lores (sorry, I couldn’t resist) thinks she is in a non-traditional relationship just like her parents. She thinks it worked for her parents and doesn’t think he is a throw-away guy. Dolores can’t throw him away since he is never around to toss out.

Dolores calls Margaret and discusses the sh*tshow. She thinks Jackie threw gas on the fire. There would never have been a fire if Teresa had not allowed production to use her as a weapon to create drama.

Melissa calls Jackie to try to explain to her that the delivery wasn’t the best. She thinks Teresa cannot comprehend an analogy. What was the so-educated one thinking would happen when you try to reason with a dum-dum?

Dolores and Frank are talking about the non-relationship with David. Frank thinks she is bitter over not getting a commitment. He is going to reach out to David for some guy time. Dolores is more concerned over the blood bath that will play out if they all show up in Lake George. She needs to focus on the drama there since her bullsh*t storyline is so stale.

Margaret tells Joe B. that Jackie is canceling because of the Teresa drama. Wow, he helps her pack? He might want to get his tools out and get to work on that house instead! Margaret thinks she is going to get an apology for Jackie from Teresa? Does she know her?

Jennifer arrives and Melissa is none too thrilled. We get a montage of these two attention whores who are more alike than they think. Jennifer thinks that Melissa relates better to her own image in a mirror. Agreed, but the vain apple doesn’t fall far from the Aydin tree either!

The ladies, minus Jackie and plus Lexi, head to Lake George. Teresa arrives and she acts like she didn’t know Jackie wasn’t coming. She is a terrible actress. Teresa keeps reiterating how happy she is that Jackie isn’t there. She claims where she comes from girls want to know if their guy is messing around. We then get a much-needed montage of Teresa WANTING to know that Joe was playing around town.

Teresa shares her version of what transpired between her and Jackie. She isn’t apologetic about what she said to start the drama. Teresa thinks Evan is suav-ey or some mispronunciation like that and looks like the type that cheats. She wishes that Jackie showed up so she could have rode her all weekend. Well, that would have been the closest she would ever get to Evan. Teresa can’t understand a relationship where you don’t give blowj*bs. She is used to licking them upside down, and that visual made me throw up in my mouth.

What is this fluff scene with Frank and David going to a shooting range? What can possibly go wrong with guns, ex-husbands, and current boyfriends?!? David must have learned something in sniper school. He is a pretty good shooter. These two have such a weird bromance. I see more chemistry between these two than Dolores and David. Frank shares how David invited him to stay at his house as long as he doesn’t bring Dolores since he had a downstairs bathroom when he was recuperating from an injury.

Frank decides to get involved by questioning David about his relationship with Dolores. David, obviously, is putting on the breaks about having a relationship. Frank tries to tell him he is a sh*tty boyfriend and comes across as a jerk-off.  Takes one to know one, Frank! That was such a meaningless talk! Production, please shelve this ridiculous storyline!

The ladies arrive at the house and Melissa finds the best room — with a mirror. The view is beautiful from the deck. Margaret wishes she had brought some gummies on this trip. Cocktails and gummies make for a great party! I am so jealous of them being on vacation. Sigh, woe is me.

Teresa has to keep mentioning how Jackie isn’t there. She defends what she did since Jackie threw shade at her in the past with the quacking like a duck crap. Teresa is the queen of deflection. Margaret is so on point when she says Teresa thinks she is a douche if she apologizes but fails to understand she is coming across as one by being unrepentant.

Dolores thinks that Jackie is lucky that she escaped before there was bloodshed. She is confident if Teresa hadn’t bolted when she did her Paterson would have come out.

Back at the Goldschneider residence, Jackie is at home with her kids and cutting their hair. She is trying to navigate her home life since Evan is really angry over what happened. Jackie is feeling guilt over exposing Evan to this toxic housewife environment.

Jackie has to explain to her kids why she decided to stay home. She resents Teresa because she gets to go on vacation with HER friends. Jackie is hopeful her friends will defend her in Lake George. You can always hope, Jackie!

Melissa tries to get Margaret and Lexi to understand the dynamic with Teresa. She doesn’t take responsibility for her actions and sees red when her kids are mentioned. Teresa isn’t making nice with Jackie anytime soon. Hell will freeze over first or the Bravo checks will stop and THAT will get her attention.

Margaret keeps having nip slips. Please put those puppies away, and while you are at it, stay indoors. The heat may melt your face even more than it already is! The ladies all do some shots with Jennifer right in the middle. Production is making a point of illustrating how Ms. Aydin’s drinking is going to become a problem this season.

The ladies are heading out to dinner. Teresa is on a manhunt and looking to get laid. Jackie sends the ladies a text to have a good time. Teresa shares that Gia told her to apologize for what she said. Gia is the one who can get her mom to realize she screwed up. Thank God that Teresa has a kid who can be the voice of reason. What, Joe Guidice is selling sex toys and he sent her a sample? Yuck, I don’t think I would purchase anything from Juicy Joe.

Dolores tries to get us to believe that she has this amazing lover in David. She thinks he knows his way around a vagina. David should! He is an OB/GYN for God’s sake! Maybe she should get knocked up so David can demonstrate his many talents?

Margaret has to mention that Jennifer and Melissa are playing nice. Jennifer admits calling her self-absorbed was wrong. She wants to start with a clean slate.

Margaret thinks that Teresa cannot process how her actions created the mess they are in. Rational thoughts can’t permeate that thick blockhead clogged up with cobwebs, don’t you know? The dinner vibe is good for now, but as long as the alcohol is flowing, anything can happen, right?

Next week, we are still in Lake George. Teresa is causing trouble by telling on Melissa and saying that she is having a flirtation with a restaurant owner. Hasn’t that woman learned anything? I hope everyone has a fabulous weekend, and stay safe!

SHOULD JACKIE HAVE COME ON THE TRIP TO CONFRONT TERESA AGAIN? TELL US IN THE COMMENTS!