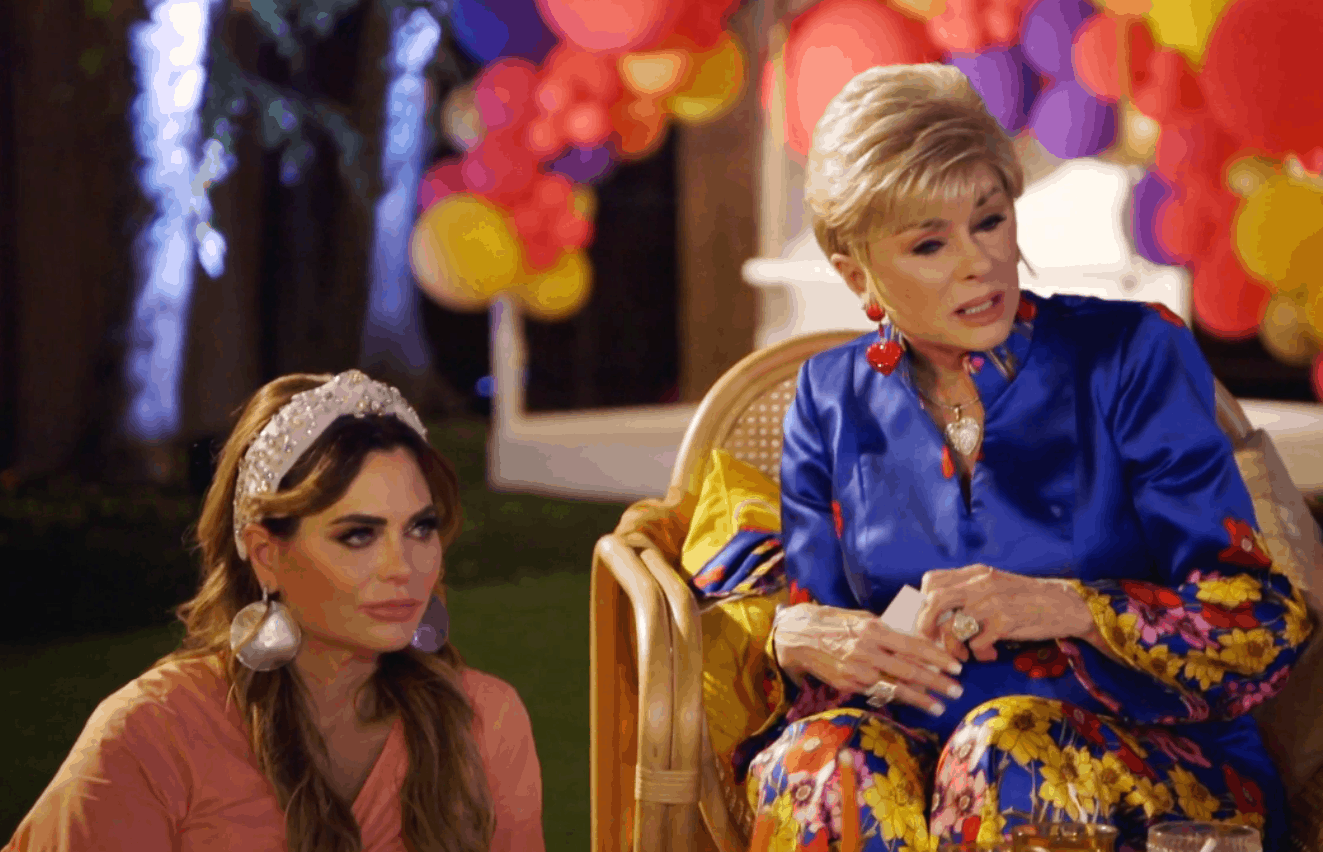 On this episode of The Real Housewives of Dallas, D’Andra is hosting her shaman party and Tiffany celebrates her birthday. A good time turns into a fight after a few too many shots are had and a few too many emotions arise…

Right off the bat, Brandi wants to use the shaman party as an opportunity to address the elephant in the room with Tiffany. Before things take an awkward turn, D’Andra jumps in and guides the women to begin the function. The girls are gifted embroidered caftans and sit in a circle while getting doused with smoke… well, everyone except for Tiffany. “Can I have a little less smoke? My allergies…”

D’Andra is hoping for a rebirth of the friendships, but it appears as if Kameron is a little “immature” for meditating. It doesn’t help that Kary calls the breathing exercises “funny.” Could you imagine how p*ssed Karry would be if anyone in the group ruined an event she planned? Kam is insistent that everyone is brainwashed, so she keeps one eye open the entire time, thus ruining the meditative process. And of course, Brandi feels as if she is doing something against her beliefs because she is a Christian. There’s always a problem with Brandi…

As expected, there are some healing exercises for the women to work through. Kary and D’Andra get the chance to talk their issues out, and Tiffany and Brandi do, too. Brandi holds back tears as she explains that she’s sorry for putting pressure on Tiffany. She apologizes and tells Tiffany she loves her and comes clean that her feelings of discomfort are only reflective of herself. Brandi is in her own head one hundred percent.

Once the women get covered with rose petals, it all unravels. Kary and Brandi sit bolt upright, claiming the sounds scared them. Maybe Brandi feels like she is going to a scary place because of all the lousy things she has done?? Funny how the girl who was sooo uncomfortable meditating (as a Christian) talks about a place in Arizona where you meditate and get an orgasm. Right.

The next day marks a big chapter in Tiffany’s life. She has her meeting with her bosses to discuss cutting down her hours.  While she stresses over that, Brandi does her best to balance her three children. She spends some QT with Brinkley and we find out that Brinkley has dyslexia and ADHD. Brandi tries to talk to her daughter about her issues while Brinkley puts makeup on Brandi. It is refreshing to see a softer, less combative side of Brandi, who continuously reminds the viewers how in times of need, she looks to Jesus.

Tiffany returns to the husband of the year, Daniel, who has set her up with a wine flight and a charcuterie board. Will he marry me? He listens intently as Tiffany tells of her meeting. It turns out, her boss was completely understanding, and she can breathe a sigh of relief for asking for one day off a week. Tiffany now worries that her mother will be disappointed in her going down to “80%…”

Kary continues to dress as though she shopped in her daughter’s closet. She visits the space in preparation for Tiffany’s birthday party that she volunteered to organize. Kary chats with the party planners and stresses Tiffany’s request for a Moroccan-themed birthday party.

After throwing her daughter a few terrible football passes, Kam, “the wallet crusher,” touches base with Court regarding the house situation. Court remains steadfast that Kam should be left out of the house-selling process. Kam whips out her phone and busts Court. The house is currently pending and Court confesses that they are talking to a buyer, yet he never told her. He keeps reminding Kam that the house is not sold yet, therefore there’s no reason to get her all excited. Court promises that in the future he will do a better job of keeping Kam in the loop, but he swears he is only keeping her in the dark because he doesn’t want to see Kam sad again. Thanks? I guess…

It’s the day of Tiffany’s Moroccan-themed birthday party. Although the event looks nice, I am certainly not getting Moroccan vibes… The good news is that Mama Dee is attending the event as a big surprise for Tiffany. D’Andra looks way more “I Dream of Genie,” and Mama Dee just stands by silently judging. Daniel walks Tiffany in and he looks like he immediately regrets his decision…

Dee was a pretty good surprise for Tiffany, but Kary promises this is just the start of the surprises for Tiffany… that gets me nervous. BTW: Why is Brandi so immature… asking Tiffany what she finds in people’s butts?! Tiffany doesn’t skip a beat and rattles off a list: “Doll heads, batteries, pens, flashlights, dildos…” All of the things Tiffany has pulled out of people’s buttholes. Tiffany proceeds to make a speech where she discusses how she never really had a group of girlfriends (not sure she does now either, but I digress…) and how lucky she now feels. Notice how Brandi was the first one to run up and give Tiffany the big hug. #Faker.

Mama Dee begins to rant about some weird life lessons that borderline sound like she was a “gold-digger who stalked” Glenn Simmons to become her husband, but I guess it can also sound like achieving your dreams and goals.

The topic of the shaman comes up, and Mama Dee makes it clear that she thought it was a bit demonic. Brandi jumps all over this and commiserates with Dee. They begin talking about how un-Christian the event felt, buuuut correct me if I am wrong here. Brandi claims she sees ghosts, consults mediums, and makes insensitive (racist) videos, but NOW she believes that attending the shaman event was going against her beliefs in Jesus Christ. “As your sister in Christ,” Brandi reminds D’Andra that she is a Christian and questions why she walks away from her faith. D’Andra schools her by quoting the bible, and D’Andra knows the truth… Brandi ain’t Jesus. Although this fight is far from over, Momma Dee reels them in and reminds the girls that this is (her second daughter) Tiffany’s birthday party.

The cake comes out and so do the belly dancers, wielding snakes. Who knew Kam was a snake whisperer? She tells the snake it does not have to be a “stripper,” and she talks to it like a lady who doesn’t own a python bag. LOL.

The night wears on and the drinks flow like water. Christian Brandi is falling off the swing and D’Andra is gyrating in a way that no one should ever do in front of her mother. It’s about time Mama Dee calls it a night, don’t you think? In fact, she def should have left because the wheels fall off shortly thereafter.

The topic of D’Andra’s last name change surfaces and a wasted D’Andra attempts to turn to her mother to support her. Instead, Dee throws D’Andra right under the bus. According to Dee, D’Andra changed her last name to Simmons (her stepfather’s last name) because she knew it would get her farther.

D’Andra is not happy that her mother outted her. She calls Dee a “f*cking b*tch” and claims she changed her last name from Callaway to Simmons because she wanted to show how much her stepfather took care of her (financially, I am sure). It’s interesting because the last name Simmons is very recognizable in Texas, so it is a bit questionable as to why she changed her last name…

This fight is a total buzzkill. D’Andra is wasted and furious, trying to save her reputation. Dee looks on completely disgusted and leaves the party while Tiffany and D’Andra fall off the swing, nearly breaking their necks. These women are FLAGGED. It’s time to put away the snakes and go home… this is a deeper discussion between Mama Dee and D’Andra, meant for another (sober) day.