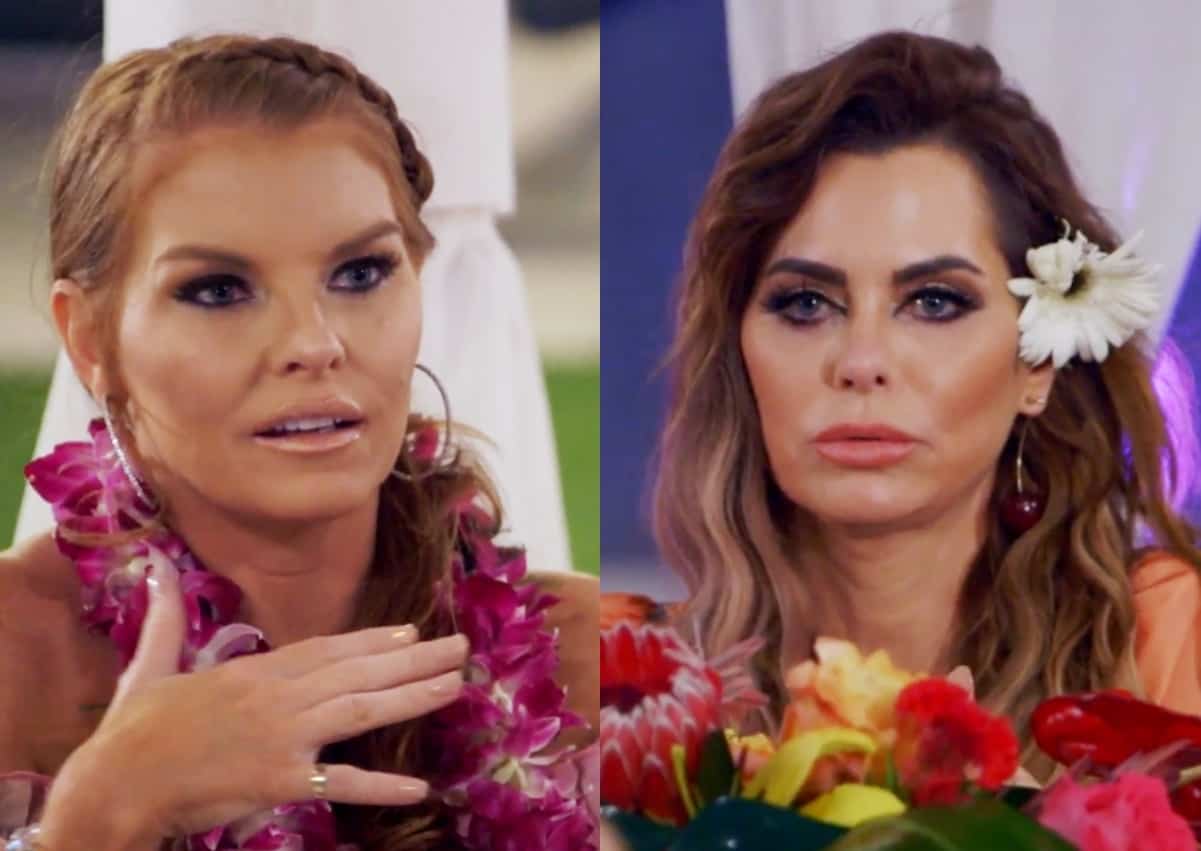 On this episode of The Real Housewives of Dallas, Tiffany gets the girls together for a luau, and the conflict between Brandi and D’Andra escalates. What does it mean to be a good Christian in Brandi’s book??

Kary and D’Andra stop over at Tiffany’s to discuss the Moroccan birthday celebration. Tiffany is beyond thankful to have finally found some girlfriends, and she thanks Kary with a basket of hot sauce because nothing says thank you quite like heartburn, amiright?

Watching D’Andra trying to differentiate between Tiffany’s twin daughters is absolutely cringe. Tiffany laughs it off, but something tells me she won’t be so happy to find out D’Andra doesn’t think the little ones are truly child geniuses.

Maybe because she realizes hot sauce is not truly a proper thank you… or maybe she just wants to show off the fact that her husband owns a hotel, but Tiffany tells D’Andra and Kary she is going to be hosting a luxe luau and they’re all invited!  The good news is, there may be fewer rules at the hotel party cuz it ain’t Tiffany’s house and she won’t have to clean up after the messy girls.

Later in the conversation, D’Andra expresses her displeasure with Brandi questioning her Christianity at Tiffany’s birthday. D’Andra makes it clear that dealing with a shaman does not make her anti-Christian and she doesn’t appreciate Brandi’s judgmental tone. Regarding the blow-up with her mother, D’Andra feels as though Momma Dee “betrayed me and it really, really hurt me.” All Momma Dee did was speak the truth about why D’Andra changed her last name to Simmons. I am not buying D’Andra’s explanation… but I am not faulting her either. It’s crystal-clear that life as a Simmons means a lot more opportunity! Tiffany attempts to smooth things over with D’Andra and Momma Dee and Kary chimes in about mother/daughter relationships. D’Andra gets talked into having a conversation with Momma Dee to try and right the situation.

Today is the day Stephanie is “giving birth to her locker room baby.” Her goal to help needy schools that require new locker rooms is finally coming to fruition. Interesting that she gets b*tched at for being over budget with the project, yet she is setting off to the unveiling in a private plane. LOL. She is officially unveiling the fresh locker room to the community, and she couldn’t be more excited to do it with her mom, Brandi, and her husband Travis.

Travis seems like he would rather be anyone but there for his wife and he pretends to be happy for her. Stephanie is absolutely elated to do something nice for people who need it and really feels like she is regaining a part of her life that she lost once she married Travis and had children. Stephanie calls Travis out for being unsupportive throughout the process, but she also lets him know, “I appreciate you letting me get there.” One step forward, two steps back.

Later, Tiffany’s mother asks to stop by to drop off a red envelope in celebration of Tiffany’s birthday. It’s awkward because Tiffany is absolutely dreading telling her mother she cut her hours from work. It is like watching a teenage girl come clean about underage drinking as Tiffany slowly admits to her mother that she will be working one less day starting next month. Tiffany worries she feels more like an “investment,” but her mother is happy to hear the news since it means she can spend more time with her kids. In fact, her mom suggests she take MORE days off. There goes *that* storyline…

“Even though my mother ran me over with a bus the other night,” D’Andra feels the need to follow her spiritual journey to control her emotions and apologize for her behavior. D’Andra cuts right to it and says she is sorry to Momma Dee (most likely in hopes of still remaining in the will). D’Andra explains she’s not an “opportunistic person” (what?!), yet Momma Dee claims to have remembered the exact phone call when D’Andra told her WHY she was changing her last name to Simmons.

D’Andra is still sticking to her story and wonders if she didn’t change her name, would her relationship with her birth father be as estranged? Perhaps if you didn’t cut everyone else out of the will, you wouldn’t have as many issues, D’Andra… Momma Dee listens and explains that she thought they were done with all the “hiccups.” Momma Dee and D’Andra hope for a better relationship in the future… as they sit nearly an arm’s length apart on the sofa.

Kary is living her best life having all her kids in the same city. She goes out on a hike with Olivia, Sophie, and Sage, the puppy. Kary lets the girls know about her life with her mother growing up, and she uses this as a platform to apologize for putting them through a lot during the divorce with their father. She was inspired by D’Andra and her issues to talk to her daughters about communication and her past behaviors. Kary sounds like she is reading off a Hallmark card script during this forced conversation, but she has high hopes of being a better mother to her daughters.

It’s the night of Tiffany’s luxe luau, and evidently, there are no rules! While getting ready for the event, Tiffany hears about D’Andra’s chat with Momma Dee. She is happy to learn they were able to talk through their differences. Now if only Brandi would apologize to D’Andra. Stephanie suggests that Brandi talk to D’Andra about the Christianity issues, so as to eliminate any awkward interaction.

At least Tiffany’s party actually feels like the girls are in Hawaii versus the “Moroccan” birthday celebration. Plus there’s no curfew, crickets, or booties! Score. Even Kameron agrees THIS party is a hit. (Side note: Kam doesn’t know what a bill is? No wonder Court feels like he can handle the entire house situation without her “help.”)

The night seems to be going well — there is a hula lesson and fire dancers, and of course, Tiffany has to remind the world that she is filthy rich by yelling out, “Please don’t light my hotel on fire.” There is laughter and fun — until Kary goes and brings up the drama between D’Andra and Brandi. She plays dumb about the situation, thus leading the women to address the elephant in the room.

All I know is don’t ever call D’Andra un-Christian cuz the girl will not stand for that. D’Andra calls Brandi out for her haunted house, for her talking to ghosts, and for her going to mediums. Brandi tries to excuse all of those things by claiming the ghosts come to HER and that she has no CHOICE in the supernatural activity. Brandi states, “I respect people’s journeys,” but apparently she also judges everything they do along the way.

D’Andra claps back and wants to know if she should get rid of the pendulum that they used to call ghosts while they are on the topic of Christianity. She calls Brandi a “cafeteria Christian” since she picks and chooses what to follow and what to ignore. Brandi attempts to save face by saying she didn’t like the shaman “astro gliding,” which is actually a lube that (of course) Stephanie uses.

Listening to Brandi say D’Andra could have been a little more mature about what she does and how she handles it makes me LOL. How absolutely hypocritical of Brandi. Thank goodness for Kary and her “nine commandments.” At least we can count on her to change the subject and sprinkle in some comedic relief. But based on D’Andra and Brandi’s faces, it doesn’t seem like this conversation is over.