RHONJ Recap: Joe Goes Off On Teresa About Her Ex-Husband Dividing Their Family, Teresa Apologizes To Evan And Margaret Calls Jennifer A Sloppy Drunk 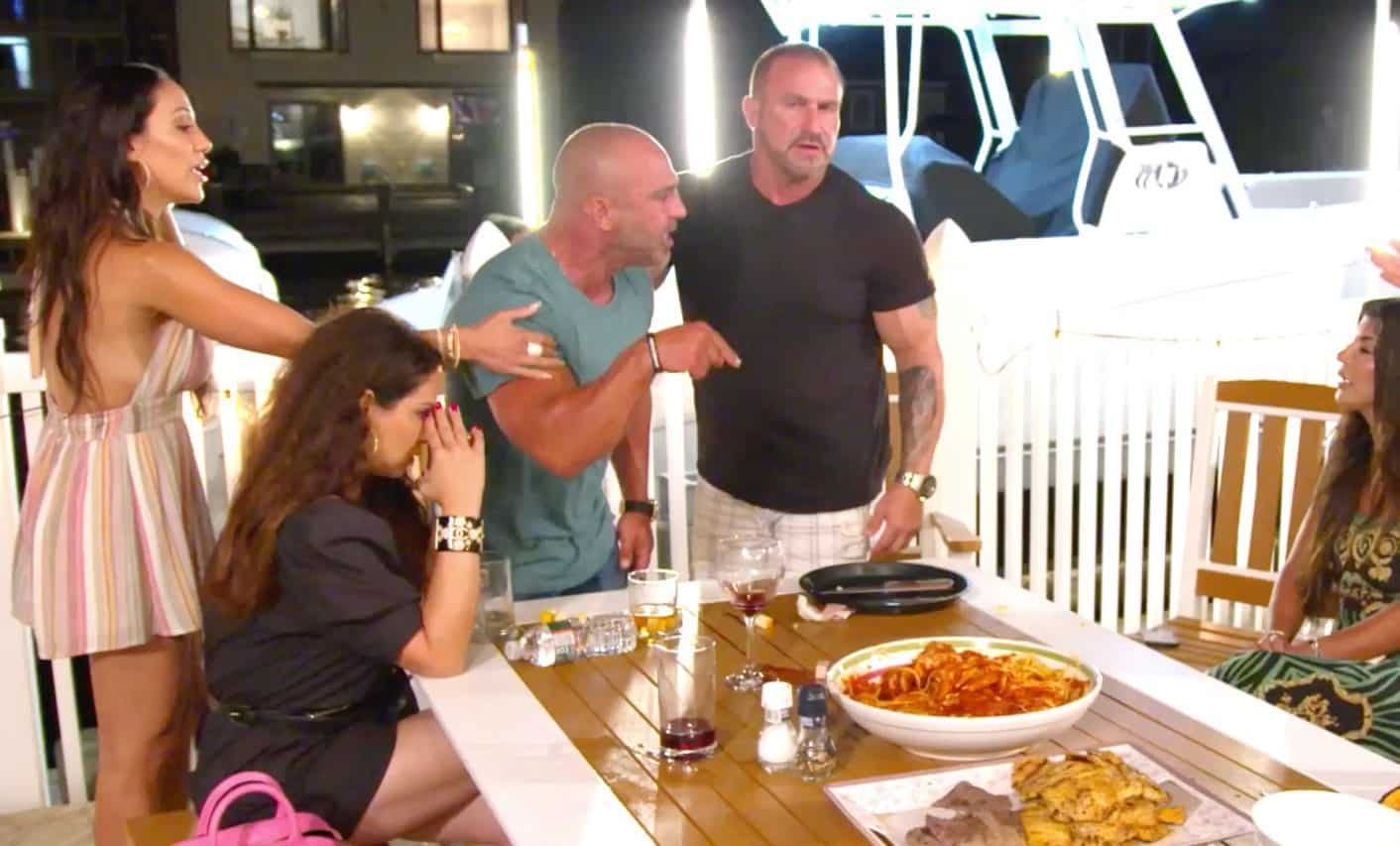 This week has been quite interesting to date with one of our other housewives from Salt Lake City, Jen Shah, getting a little visit from the Feds. Maybe she can call Teresa since she might know a little bit about dealing with that? Moving on, we are back for more at the dinner of dysfunction. This meal is sure to bring on a bad case of indigestion. Grab your Tums and let’s get started!

Teresa goes stomping upstairs and Joe Gorga follows her up to talk to her. She tells him to go f*ck himself and is pissed that he didn’t have her back. What a recurring theme for these two rival siblings! Please get off this carousel of sibling dysfunction!

Jackie tells Margaret that she is upset over what Joe B. shared at the guys’ party, thinking it gave the rumor life. She calls him an as*hole and is losing her sh*t that everyone isn’t being blindly loyal to her ever-so-faithful, Evan. Jackie screams out, “Stop yelling about me,” and she wants to go home and not deal with this. Honey, you are the only one yelling right now. Jackie feels like her friends are using her as a punching bag. Margaret thinks Teresa is the reason for this mess and needs to clean it up.

Teresa then goes outside and talks to Joe. She hates when there is an issue and he doesn’t defend her. Melissa gets pissed at Teresa since she wants their loyalty but never stands up for them. She must have gotten some courage to go after Teresa, but did you really need to toss good cheese to make a point? Melissa usually holds herself back so she doesn’t rock the Gorga boat. That boat has now officially capsized, and she is treading water to save her job and get some screen time.

Joe correctly states that Joe Giudice put Teresa in jail and their mother in her grave. Wow, his face was the color of flaming red pepperoni! It came from pure anger and not from the steroids and excessive prosciutto he ingested! That was some authentic reality there!

Joe Gorga blames Joe Giudice for their family being divided. It is blatantly obvious that this family has become really divided over everything that has happened and undoubtedly since the Gorgas came on this show.

Dolores, very calmly I might add, tries to quell this situation and reminds Teresa and Joe that they are family. Frank Catania even gets involved since it is disturbing to see family members be this raw. They now have to sweep up all of that cheese and clean up after the disastrous dinner.

Jackie is having a total meltdown in the van slobbering with her swollen lips. She thinks Teresa has been beating her up. Jackie is literally an emotional mess. She calls Evan back at Melissa’s house and tells him that Teresa was sharing that the guys were discussing the rumor at guys’ night. Evan is going to come to the Shore for a showdown. He might want to stay home since he won’t be able to cope with this level of anger and face the music on his gym playdate.

Dolores is trying to calm Teresa down, and she thinks she is eviscerating Jackie. Teresa thinks Jackie is a bad person and doesn’t have a heart. Dolores wants Teresa to prove to Jackie that she isn’t a bad person. I really love Dolores in this episode since she is like Dr. Phil in every scene!

Jackie is upset that Jennifer was in the mix and causing trouble. She doesn’t appreciate her injecting herself into this drama. Side note: Please put some argan oil in Jackie’s rat nest of hair for God’s sake!

Joe B. is sorry that he upset Jackie and does seem remorseful. Margaret apologizes to him for yelling and belittling him. I bet she kicked his a*s later that night for running his little mouth to the boys.

Frank and Dolores are worried that Evan isn’t coming in peace. They think Jackie ignited his anger and he is going to be coming in hot. Now that is a strong possibility, or he could come with his guilty tail between his legs?

Joe calls Teresa and wants her to make nice with Jackie. Yikes! Teresa’s skin looks horrible without makeup when she is lying in bed. I guess all of that makeup they spackle on is really ruining her skin.

Thank God, my favorite Jersey hubby, Dr. Bill, arrives! He always has such a calming presence and gives sound advice. Dolores needs an ally to partner up with to control this rowdy group. Jennifer shows Bill her new toy upstairs. Bill just wants it to be used on his back. She tells him what a sh*tshow it was the night before. Bill wishes he didn’t bring that rumor home with him and share it with Jennifer.

Teresa tells Jackie that she doesn’t like what went down the night before and wants to just drop everything. Jackie doesn’t want her to talk about it anymore. In her ITM, Teresa shares that she only apologized for her brother. Teresa is reluctant to discuss it with Evan, though, since that is not how traditional Italian couples handle things. She thinks that Jackie should just relay it to Evan since Teresa is old school and it’s the wife’s job to make it right with the husband. Teresa intimates that they must not have that type of marriage.

Melissa gives a house tour to Jennifer and Dolores. This place has seven bedrooms?  Are they counting closets in that room count?

Evan arrives and it is off the charts awkward. Teresa greets Evan and tells him she is sorry for what went down. Margaret isn’t impressed with the sincerity of the apology, but coming from Teresa that was a total miracle.

Teresa and Joe talk and agree that they need to be united since that is what their dad would have wanted. Now that is a great sentiment and a wonderful way to honor their dad’s memory.

The gang decides to go out on the boat and the wave runners. Melissa, of course, wants to do a bare a*s contest since she is after all an attention wh*re. Joe B. needs to be a safer driver because he plows their wave runner into the boat.

Bill and Jennifer are having a blast on their wave runner. Jennifer reflects on coming down here when she was younger. She remembers how men used to check her out and she couldn’t understand their staring. Jen’s mom used to tell her to enjoy it since they could be future husbands for you!

Jackie can’t believe how Teresa has flipped a switch since she is now being fun and taking photos of her and Evan. They play right into it and start making out on the boat trying to prove a point that they are a united front. #fake

It is so weird to see Teresa and Jackie sitting together already at the table. You can see production’s little hands all over that scene. Teresa keeps giving Joe G.’s vibrators props by saying how they are great to use to help you sleep. I have to reluctantly agree with Teresa on that one.

Jennifer tells Margaret that she was surprised she went in so hard on Joe the night before. She thinks she talked down to him. Well, he is vertically challenged after all. Margaret then goes in hard on Jennifer and calls her a sloppy drunk.

Jennifer then shames Marge by saying she slept with her boss and that was some sloppy behavior. Margaret is incensed that she shared something so personal and she is using it against her. Jennifer thinks that being drunk at a party is showing a vulnerable side of you. Sorry, Jen, there is no comparison between Marge being in an inappropriate relationship with her older boss and you drinking excessively.

Margaret thinks that Jennifer never fights with her husband since he is the meal ticket for her whole family. She thinks that she is like a concubine. Where did this animosity come from?

The guys decide to watch this scrap from afar and they look like they are having a lot more fun. It is better to give the ladies some space so they can reduce the noisy screeching sounds that come from their table. These guys can recognize that anytime they try to sit down for a civilized dinner it turns into a darn smackdown. Who would ever want to go on vacation with this crew?

We now get dueling conversations between Marge and Jen. Jennifer doesn’t like being referred to as a sloppy drunk. She thinks Margaret is making a comparison to Marge Sr. and she is nothing like her. Dolores thinks Jennifer spits out random things and doesn’t read the room before she shares things.

Margaret is angered that Jennifer shared something about her boss sleeping with her. She felt she shared that in a private moment ON NATIONAL TV and shouldn’t have been used against her.

We then get a glimpse of what is yet to come. Teresa has a new guy and some of the marriages are going through some challenges. It appears this is going to be a good season, and I am looking forward to the rest of this crazy season. Be well, everyone, and I hope everyone has a happy holiday weekend!

WHAT DID YOU THINK ABOUT THE FIGHT BETWEEN JOE AND TERESA? TELL US IN THE COMMENTS!