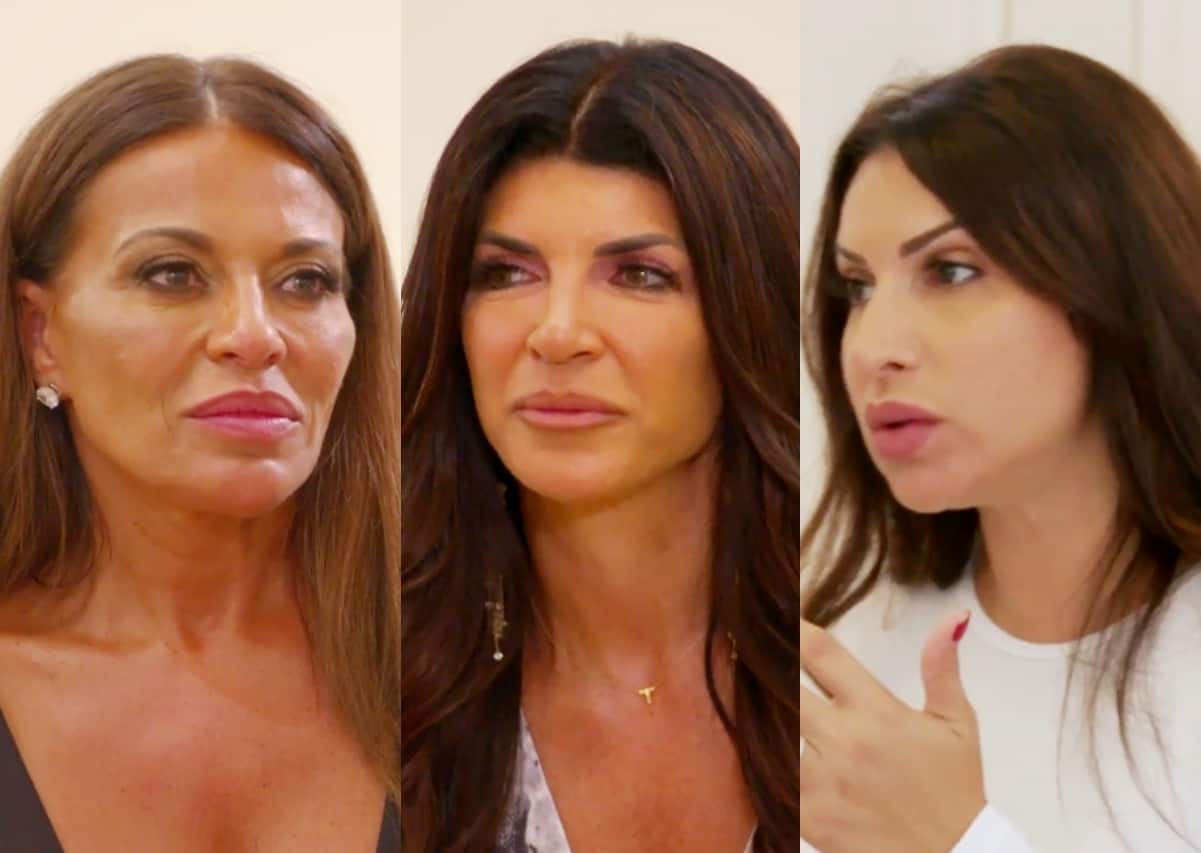 This week on The Real Housewives of New Jersey, we have a medium that is helping our housewives communicate with the dead. Jennifer’s parents are fighting and she is in the middle. Let’s find out what their deceased relatives have to say about their present lives, shall we?

We are back this week after an emotional episode last week. Let’s get back to the grind with our Jersey kids learning through virtual schooling. We can all relate to those difficulties, but most moms won’t deliver Chick-fil-A to our room for lunch. SIGH, I wish.

Jennifer and her mom, Josephine, are looking at Baby John’s pictures. She thinks her mom missed out on meeting the baby. Jennifer tells Josephine about Margaret’s comments about her drinking. She thinks she is like a barking dog. Jennifer thinks Gabby is hormonal and snippy with her when she comes in the kitchen asking for food. Grandma Josephine won’t let Jennifer say an unkind thing about her granddaughter. I get it — Gabby is a good kid and she is probably really close to her.

Josephine thinks Bill is a wonderful husband, but she is obviously not a fan of her own husband. She recalls that John used to order her around and he never brought her tea when she was sick. Josephine was forced to marry him and move to the U.S. She thinks he was never man enough and was always working when the kids were growing up. Josephine was only 16 years old, and he was 10 years older. She was married for 48 very unhappy years, according to her, and she is really bitter over it.

Jackie, Margaret, and Melissa meet up for lunch. They discuss the challenges of raising kids. Melissa is upset little Joey didn’t have a pencil on his first day. Margaret, of course, changes the direction of the conversation to herself. She recalls how Marge Sr. raised her. Margaret didn’t exactly have a good role model, which I can acknowledge, but she sure likes to talk about herself. She was intimidated by men and was unsure of her own sexuality. Marge Sr. seemed to have raised her in a sexualized environment.

Margaret mentions how Joe Gorga acted at the Shore. She thinks he wants Melissa to remain dependent on him. Melissa then pivots and tells the ladies that Teresa is going to have a psychic party. Margaret is hoping that the psychic will spill who Teresa is fooling around with. She thinks someone is eating that pineapple bush #eww. Margaret’s investigations have concluded that Ms. Giudice must be canoodling with someone. In her ITM, Melissa shares that she has been sworn to secrecy on that subject.

Jackie doesn’t understand how pineapple changes how you taste since she doesn’t partake in that kind of sexy action. She might want to reevaluate what she will and won’t do in the bedroom. Evan might start eating more at home instead of getting his snacks elsewhere.

Dolores makes an appointment for a biopsy on her breast due to an abnormality. She won the Ambassador of Hope for women’s health. Dolores has been advocating for other women to take care of themselves. She needs to learn to take care of herself too — not the other 2/3 of her throuple.

Frank comes home, and he wants to know if she is going alone for the biopsy. He wants to know if she told their son or her mom. Dolores wants to keep this stress to herself since she doesn’t like anyone worrying about her. She says that’s because Italians don’t talk about their business. Dolores might want to re-think that since it really hasn’t served her well.

Frank wonders if David will even inquire about her results since he obviously can’t make time to take her for the biopsy. Dolores is confident he will check on her, but I agree with Frank that he isn’t supportive.

All of the ladies are discussing what they will find out at the psychic reading. Margaret wants to get the dirt on Teresa. She also thinks Jennifer with her rich girl problems is tone-deaf. Jennifer has been online whining about not having a nanny and a housekeeper. Margaret thinks posting something like this during the pandemic is insensitive when people are barely surviving with their stimulus checks.

The psychic, Gina Marie, arrives at Teresa’s, and she is already reading that how Gia is holding her hands is reflective of her grandparents. It seems like it will be the whole gang plus Michelle is coming too. Margaret invites the ladies to go out on her ghostwriter’s yacht the following weekend. She is going to do a reading of her new book.

Jennifer arrives and talks about her challenges at home with no help. She thinks calling someone a housekeeper is degrading. Jennifer thinks it is preferable to refer to them as a nanny. Margaret is clearly triggered by anything Jennifer is saying at this point.

Gina Marie starts with Margaret and her former father-in-law named Bernie. She says he was her favorite human and she thought of him as a dad. Bernie wanted to thank her for raising his grandchildren.

Michelle is now getting read and Gina mentions she was from Portugal. Michelle’s grandfather sent the baby to her with a kiss. How sweet, and now move on.

Dolores now gets to hear from her grandparents. They want her to brace herself for something physical. Gina Marie says that she needs to take care of herself and sees an image of her house crumbling.  She tells her that David isn’t her soulmate. She deserves someone who will pursue her. WOW, that was some earth-shattering news from the dead. Gina Marie does tell her that there is an amazing lover out there for her, but she needs to move on first.

Dolores keeps saying that she is okay with David not being her forever. The medium then tells her that her dog, Boo, is with her grandparents. Dolores breaks down over this since he was her baby. She is more upset over her dog in heaven than being told her beloved David isn’t right for her. I get it that Boo was far more loyal to her than David is. Dolores mentions she sleeps with her dog’s ashes? No judgment, I have all of my pets’ ashes too, but not in my bed.

Melissa gets read next and she hears that her dad is there with her. She states that she is raising a state wrestler. Gina Marie sees a broken foundation that needs to be fixed. She sees her energy is moving in the right place and her dad doesn’t want her to doubt herself.

Jackie gets read and hears from her grandmother. She was her biggest cheerleader and she is very proud of her. Esther’s spirit is around her and that is comforting. Jackie shares that she didn’t go to her sister for support since they aren’t close.

Jennifer gets read about her parents. She needs to show support for her mom since her mom feels like an abused woman. Gina Marie wants her to let her mom know she is on her team and to strengthen their mother-daughter bond. Jennifer is surrounded by a strong spiritual presence. She mentions that she has an Armenian relative who was ordained a saint. That was interesting!

Teresa’s parents are happy for her, and she finds out that love is in the air. You have to wonder if Teresa’s new beau, Luis, is who the medium is referring to? I am VERY suspicious of Teresa’s reading since she has already been read by this medium.

Jackie is celebrating Rosh Hashanah, which is the Jewish New Year, with her family. She reflects on what the medium told her about her grandmother watching over her. Jackie is glad that she is with her and seeing how she is honoring their traditions. Evan isn’t 100% on board since most Jewish families have an Esther in their family. He should be relieved that Esther didn’t scold him from the grave.

Melissa takes Joe out on a date. They seem to be eating in some sort of cave-style restaurant named Rails.  How appropriate for our little caveman? Side note: Wasn’t this restaurant where they filmed an explosive scene with Teresa and Jacqueline?

Melissa decides to bring up the sex talk with Antonia again. She wants her to be able to talk to her. Melissa shares that her mom made her feel ashamed if she mentioned anything about her sexuality. Joe is profusely sweating just thinking that his baby could have sex. He is more concerned with getting laid after dinner than hearing about his daughter potentially being sexually active.

Joe reflects on when they met each other and how she was so well put together. He admires her drive and doesn’t want her to pull away from him. Joe actually apologizes for how he has been acting and doesn’t want to lose her. Melissa wants to accomplish something just for herself other than just raising kids.

Josephine arrives at Jennifer’s house for breakfast. My beloved Bill comes in and wants to know about the psychic thing.  Jennifer tells her mom that the medium told her that her feelings are valid. John takes offense to the insinuation that she was abused. Josephine says, “I was never happy while married to him.” Bill has to send Gabby out of the room since she gets upset watching her grandparents fight. He makes a good point that neglect is a form of abuse. Bill said that spouses back then were picked out of expectations not out of love.

Jennifer goes outside with her mom and tries to console her. She wants her mom to let go of the hostility. Jennifer is going to try and be a more supportive daughter. This scene is really a raw one since there is a lot of hurt between her mom and dad. Jennifer is truly in the middle of this and that is a bad place to be.

Next week, are we going to meet Teresa’s guy? Margaret tells Jennifer she is tone-deaf and Jen suggests just change the channel then!

WHAT DO YOU THINK OF THE MEDIUM’S PREDICTIONS? TELL US IN THE COMMENTS!