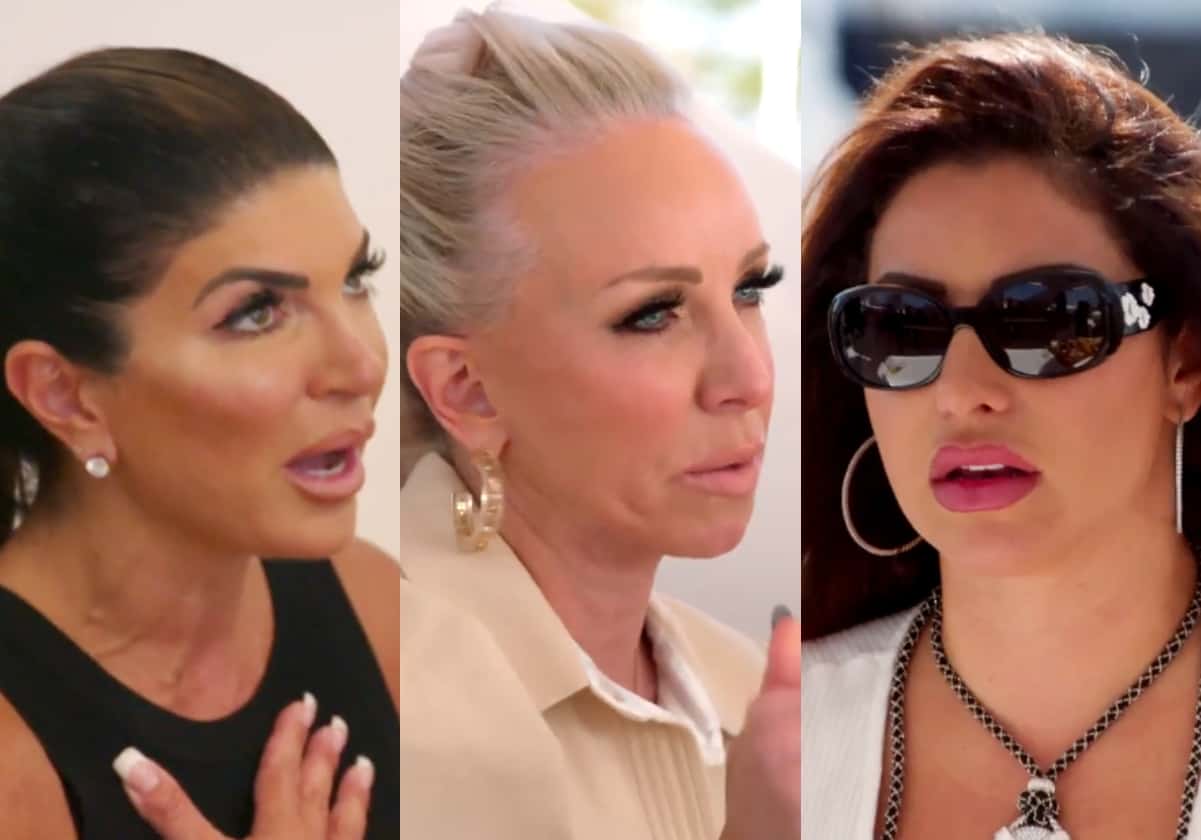 This week on The Real Housewives of New Jersey, we are going yachting and to a ladies’ tea party. Will there be rough waters at sea so maybe Marge won’t throw Jennifer overboard? Let’s hang on for dear life and be optimistic!

In summary, this episode is about relationships between mothers and daughters and one very cute son. It is not loaded with drama, but there are some heartfelt moments that are shared with us. Let’s open our hearts and dive into their relationships, shall we?

Margaret tells Joe B. she is excited about going on Emily Liebert’s yacht, but hold the phone — is he really eating a bowl of cannoli for breakfast? YUM! She will be doing a reading of her book, which Emmmmily says is really common in the literary world. Margaret is hoping she will be able to get Jennifer to realize that she was an a*s when she accused her of sleeping her way to the top. Well, Marge, you can always hope!

Dolores talks to Frankie Jr. about what is going on with her breast biopsy. She calls it a little “girl stuff.” Frankie Jr. is upset that his mom didn’t tell him about something really important about her health. He is such a sweet and very handsome kid and thankfully doesn’t take after his father!

Teresa is chatting with Gia about what Joe Giudice has been up to dating-wise. He is voice texting Gia, which sounds super creepy. Joe calls and he is aware that Teresa is dating someone. He is dating his lawyer. That is good — it’s best to just sleep with your legal representation at your side at all times when you are Joe Giudice. Milania and Gia are both happy that their parents are dating.

Jennifer talks with Gabby about her virtual school. She asks her how she felt about her grandparents fighting. Gabby was troubled that they were screaming at each other. Jennifer tells Gabby that her mom was really an intimidating presence when she was growing up. She was terrified of her and didn’t cross her.

Jennifer tells Gabby that her grandparents had an arranged marriage and it was not a happy one. She tells Gabby that Josephine would do anything to get out of her childhood home. Josephine was basically cooking and cleaning for everyone and just wanted to escape it.

Jennifer makes a good point that her mom didn’t get the opportunity to choose her own life. Josephine has lived her life with a lot of regrets and felt like she had no voice. Jennifer thinks it is important for Gabby to understand this since she is close in age to when her mom was pushed into this marriage. I agree with Jennifer. It’s important to share with Gabby some context on why there is so much animosity between her grandparents.

Margaret arrives at the yacht named Frivolous and chats with her author, Emily Liebert. How appropriate of a name for a boat to transport this group of bougie ladies, right? Jackie (in a pretty orange jumpsuit) is scouting out the crew for potential prospects for Teresa. She thinks there are some young studs she might be interested in. Teresa and Dolores, aka Sophia Loren, board the yacht. Melissa isn’t coming since she is sick.

Dolores is happy that Teresa is dating and found a good guy. She wants her to be courted by a nice gentleman. Margaret tells Teresa that they couldn’t get anything out of Melissa about if she was dating. Dolores isn’t buying Teresa’s laissez-faire attitude since she has been watching her pre-game loading up on pineapple. She knows her ride-or-die friend has been priming her pump.

Margaret decides to read the chapter about sleeping with her boss. Margaret names her Boss “Dick,” and he preferred his jeans finely pressed. She shares how he got her back to his apartment and rubbed up on her. Margaret admits that she knew he was in a position of power and felt she had to go along with it.  She rationalized at the time that she was a grown woman and she was able to make her own choices.

Jennifer recognizes that this is a different version of the story that Margaret shared in Lake George. She feels bad that she read the situation differently. Jennifer thought Margaret slept her way to the top. Margaret calls Jen tone deaf and Jen tells her to change the channel then. YIKES, that went left quickly!

Jennifer is still upset over being called a sloppy drunk. She tells the ladies that her household is a sh*tshow now with her kids homeschooling and her parents fighting. Jennifer was trying to apologize and then Margaret decided to be the accountability police and school her on proper Twitter protocol. She sincerely explains she was wrong and misjudged Marge.

Jennifer tells them that her mom is depressed and lonely. Josephine thinks John emotionally abused her. Jennifer wants to do something nice for her mom and invites them with their moms to a tea party. Teresa is sad that she is the only one without a mom, and that is very heartbreaking.

Margaret wants to move things along and doesn’t want to argue with Jennifer anymore. Jennifer is happy to have a ceasefire for now. She does respect Margaret and wants to remain cordial.

Jackie visits Melissa at her house and is offered lunch. Did she really just say she ate lunch in the car?  Melissa made a salad for them and you know production is probably telling them to keep offering Jackie food just like they push more booze on Jennifer. I see production’s hands all over these scenes.

Melissa tells Jackie how she and Joe have been bickering when their conversation gets too heavy. Joe feels he is at the bottom of the totem pole. Well, he could climb the pole so he has better positioning?

Jackie tells Melissa that Teresa told them about her new guy. In her ITM, Melissa admits that she met him. Melissa wants to see a happy Teresa instead of the miserable Teresa of the past.

Marge Sr. comes over out of her rejuvenation crypt to visit Margaret. She read her book and said she didn’t know Margaret was sexually harassed. Marge Sr. is sad that she didn’t share something so troubling with her mom. She wishes she had done a better job making her feel safe. Marge Sr. thought parenting meant having plenty of makeup in the house and only wine and cheese in the fridge. I am not surprised that Margaret is turned off by drinking!

Marge Sr. says she was not in the headspace to be able to give good advice back then. She is sorry that didn’t do a better job as a parent. Marge Sr. seems to genuinely feel guilty that she basically sucked as a mom.

Melissa takes Antonia to Envy for some free advertisement for her store school shopping. She allows her to pretty much take a bunch of clothes off the rack. Melissa then decides to interrogate Antonia about her boyfriend. She wants her to know that she needs to make sure that she uses protection and then mentions her big boobs.

Melissa decides to have this mortifying talk with Antonia on CAMERA. She must think everyone likes being “ON DISPLAY” all the time. Antonia wants no part of this very private talk on TV. Melissa must have put this on her storyboard for this season so she kept her spot on the show. She definitely got her message across that Antonia should NEVER share anything with her mom. Antonia wants her mom to shut the hell up and escapes to the bathroom for a 50-minute pee break.

Jennifer and Josephine are preparing food for the mothers’ tea. She is hoping this gives her mom an ego boost. Josephine is a phenomenal cook and she shines when she can showcase her culinary talents. Side note: I was relieved to see her mom and dad in the kitchen and managing to co-exist with each other.

Josephine gets some pampering with a glam squad. Good for her! Teresa arrives and Jennifer offers a glass of wine but is not day drinking herself. She seems surprised that Jen isn’t a big drinker. See, I told you production is pushing this storyline!

Melissa arrives with her mom, Donna. Olivia, Jen’s mini-me, is wearing her Madonna gloves, red lipstick, and Michael Kors wedges. Full disclosure: I also have a pair of those wedges. I couldn’t afford them till I was a grown a*s woman, though. #poorme

Jackie and her mom Ann arrive at the McMansion. She shadily refers to Jen’s house as the Taj Mahal, and it comes with a huge mortgage and no furniture. Dolores and Valerie arrive and Valerie likens the house to a mall. Marge Sr. and Margaret arrive late since it takes a lot of effort to look that tacky.

Melissa tells the moms that she tried to talk to Antonia about sex and it didn’t go well. I like hearing the moms describe their upbringing and sex. When the conversation is centered on their moms, Teresa gets upset since she really misses her mom. She is obviously in pain and wants to go to her mom’s grave. Teresa didn’t sleep the night before and had anxiety about going to a mothers’ Turkish tea. We now have a to-be-continued…

Next week, we will be back for more drama and we’ll find out why production ended this scene where they did! I hope everyone has been doing well!

WHAT DID YOU THINK ABOUT THIS EPISODE? TELL US IN THE COMMENTS!