Home Real Housewives of Dallas News RHOD Finale Recap: Ladies Confront Kary for Destroying Property in Southfork as She Opens Up About Tough Year, Plus The Husbands Join Their Wives for a Day of Fun

RHOD Finale Recap: Ladies Confront Kary for Destroying Property in Southfork as She Opens Up About Tough Year, Plus The Husbands Join Their Wives for a Day of Fun 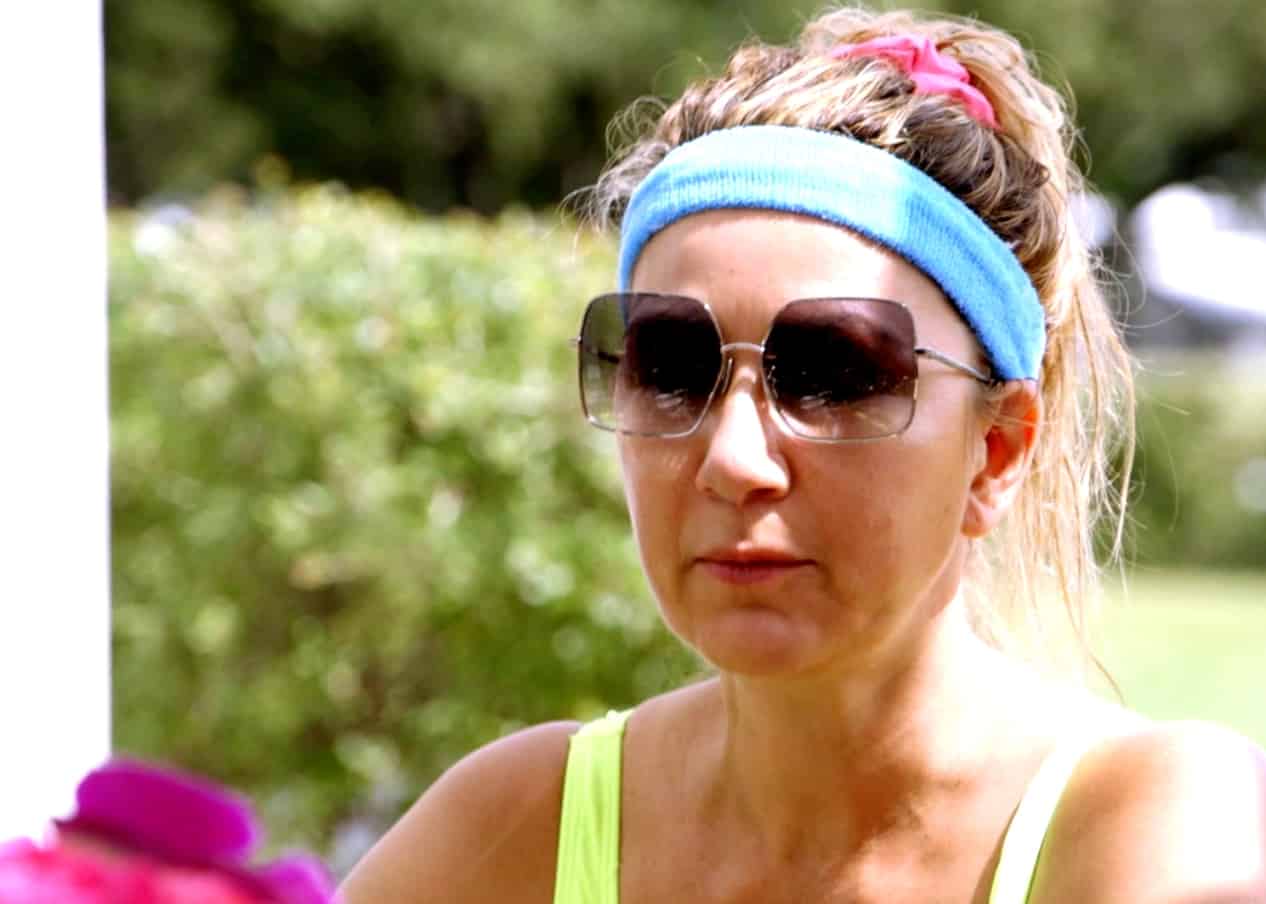 What a season it has been — time sure does fly when you’re dodging chicken feet and hunting Big Foot, amiright? On the season finale of the Real Housewives of Dallas, the ladies sure leave their mark on Southfork Ranch…

The murder mystery dinner party is in full swing and the gang is in character. Just as everyone starts to loosen up, the lights go out and the screaming ensues. Brandi tuck and rolls (thank you, Dallas Cowboys cheerleading). She then plays dead (which means she can’t make any ridiculous comments during the evening — wahoo!). She’s been “shot!” This leaves the rest of the women playing detective. Translation: It’s a hot mess trying to figure out the killer.

After what appears to be a short amount of time (probably because these ladies are nowhere near cracking the case), D’Andra makes her debut as the murderer and whips out a fake shotgun. Gotta admit — she plays a pretty convincing gun-wielding villain…

As D’Andra embraces her role, Kary takes things way too far. She throws D’Andra in the pool to stop her murderous ways (or just to be an a*shole… the jury is still out). The girl can’t help herself, huh? Mark that down as another time Kary behaved badly…

At 1:24 a.m., Brandi and Kary start waking up the other women. It is evident that those two have decided to keep the party going and are absolutely wasted. It’s all fun and games until they sneak into the closed-off set of J.R.’s murder, the only no-no room of the house. Brandi squeeeeeezes into the room past the plexiglass, whereas destructive Kary literally attempts to tear her way in. In the end, the off-limits room becomes the scene of another crime: Kary snaps the plexiglass in an attempt to join Brandi on the inside.

The next morning, the whole situation is not as funny now that the sun is out and the booze has worn off. Brandi is sick to her stomach and is trying to figure out how to break the news to Janna, the owner of Southfork. Brandi and Kary come clean to some of the ladies about what occurred, and I gotta hand it to Stephanie for telling those two boneheads that they have messed up and they have to fix it ASAP.

Brandi and Kary excuse themselves to phone Janna. Brandi turns on the waterworks and plays the victim — something she has grown accustomed to doing this season. Interesting that Brandi was laughing over the situation a few minutes earlier, but now that she must admit the damage, she is “upset.” SOMEHOW, Janna blows the vandalism off and tells Kary and Brandi not to worry about the damage. Yet another time that Brandi gets out of her problems…

In the meantime, D’Andra is still furious over Kary throwing her in the pool the night before. She lets Kameron know that she was wearing “$3,000 worth of stuff. Kary never has respect for people’s property.” Kam nods knowingly and it seems as though everyone is getting tired of Kary’s drunk song and dance. Stephanie joins Kam and D’Andra in their room and they all are in agreement. Kary is completely out of control and no one holds her accountable for her behavior.

Anyone else think for a second that Kary was texting her husband that SHE felt horrible? Alas, the text was FROM Eduardo. He backed out of the trip under the guise that he is feeling “sick.” Yes… sick and tired of Kary’s BS the way the rest of the women are.

Speaking of being tired of Kary, it has been decided that over breakfast, she is going to get a reality check. When Kary sits down from the breakfast buffet, she has no idea that the women are going to call her out for her lack of accountability. D’Andra leads the charge and points out that there is a pattern with Kary. Tiffany even mentions that Kary tends to verge on meanness when she is in that kind of mood and everyone is tired of it.

Kary admits that perhaps she is drinking too much, and Stephanie worries that Kary is not acting like herself. Kary tries to downplay the situation and tells the girls she is sorry and that she doesn’t “need alcohol to have fun.” Not buying it… and not buying the weak, broken record apologies. OF COURSE, Brandi has to step in and remind Kary she can’t punish herself because she has been there with past issues. Also… why is Brandi not getting reprimanded? She was also guilty of the JR room destruction.

After the heavy convo, D’Andra tries to figure out what is causing Kary to behave the way she is. They have a heart-to-heart in the bathroom where Kary unravels and talks about how she has always had to be the strong one in the household. It seems like her issues and stress have been compounded from this year’s craziness, but holding her emotions inside just has not been working for her.

Hold up — I thought Brandi planned Jazzercise? What happened and why did THAT get cut out?!

Later, the husbands start to trickle in as the ladies get prepared with hair and makeup for the “Dallas” themed party. The dudes (minus Court) look like they would rather be anywhere but there. Tiffany in her blonde wig is a lewk, and D’Andra is late to the event cuz she peed all over her Spanx and had to blow dry them (gross).

What is with the Brandi and Stephanie romantic moment? Brandi is clearly grateful to have a friend like Stephanie… so much so that she gifts her a best friend pinkie ring. Obviously. Seems to me that this relationship is stronger than the ones they have with their own husbands… Could this be Brandi’s subtle way of telling Stephanie she is done with the show?

Because Kary is missing Eduardo, she FaceTimes him, but it just makes it even more clear to the other women that things are awkward between the two of them. While on the topic of awkward husbands, isn’t it curious that Brandi hypes Bryan up as husband of the year considering the recent headlines?!

Stephanie does her best to try and wrap up the event the way a normal finale would, but it’s all a little forced as she walks around spewing compliments to all of the ladies.

D’Andra and her stepmother have not kept in touch. However, she has made it a habit to keep seeing that shaman. You know what Jeremy says, “A Christian in the morning and a witch at night.”

Kameron is over the moon ready to pink-out the new house and make it Fanci’s castle.

Stephanie is continuing her work on the locker room makeovers and is still with Travis. Sigh.

Kary admits that she is grateful to have friends who tell her how it really is, but the status of her marriage is still complicated.

Things have made a positive turn for Tiffany — new schedule, new relationship with her mother.

Brandi cries (yet again) throughout a speech to close out the episode. She thanks her hubby and her friends and it is explained that at a routine doctor’s appointment, she found out she was SIXTEEN WEEKS pregnant (All of that drinking! All of that tumbling down the stairs to play dead at a murder mystery party!). Also, can we discuss the freeze-frame snapshot of Brandi and Bryan smooching? Talk about foreshadowing to what one can only assume will be a juicy reunion…

TELL US — THOUGHTS ON THE FINALE OF RHOD?