by Ashlee Mason May 2, 2021 487 comments
ShareTweetWhatsappPinterestRedditTumblrMailFlipboard 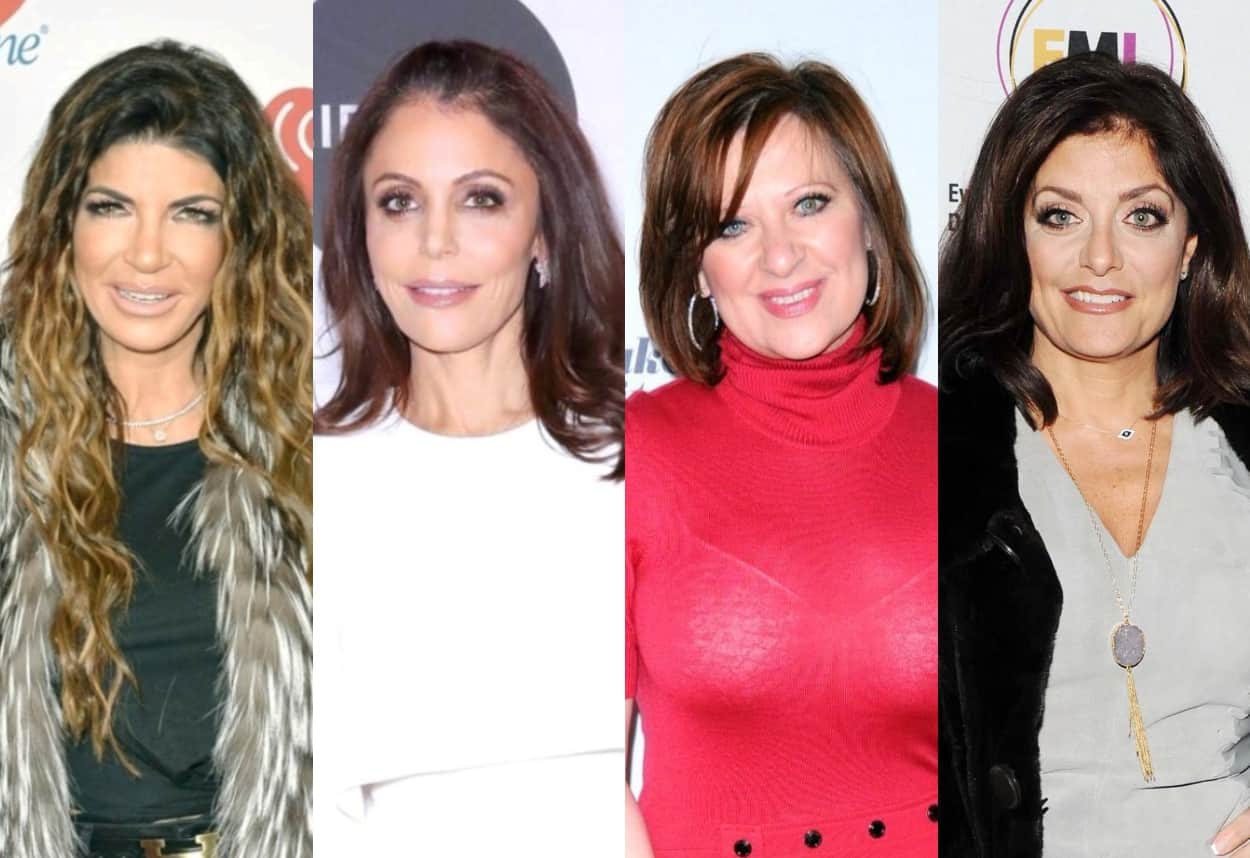 Hi, Blurbers! It’s time to hop on the party bus and whoop it up, Open Post-style! For those unacquainted with Open Post, every Sunday, Reality Blurb posts some light fluff for our readers’ enjoyment while giving you a place to talk about whatever you want! This includes shows we don’t normally cover on here, current-day pop-cultural events, or, well, like I said: whatever you want. It’s also a place to have fun and socialize, so please keep it nice in the comments section, ya dig?

If you have suggestions for Open Post topics, please send them to [email protected], but in the meantime, let’s jump right into today’s topic: The Top Ten Best Cooks on Housewives! Yes! Yes! Yes! We get to talk about food today, how wonderful is that?

Fun fact: before I started writing for Reality Blurb, I was a food blogger here. That is, until the pandemic hit. Since last March, I haven’t felt compelled to review local restaurants – particularly those that are already struggling to keep their lights on – but once things are somewhat back to normal again, I’ll probably start it back up. Why did I tell you all this, you ask? Because I lurve talking about food, and this may be my favorite Top Ten topic thus far, so let’s get to it!

Tie for 10th Place: Kim Richards and Adrienne Maloof of RHOBH – Let’s start off with these two knuckleheads that know their way around a chicken! Whether you need a chicken washed with soap, or chicken salad made with bare hands, these ladies have everything you need to make your chicken dreams a reality. Cluck, cluck! 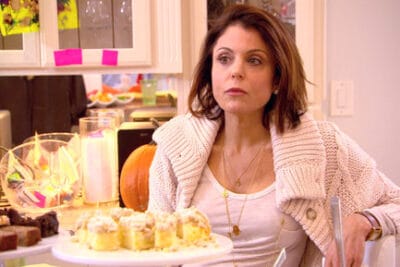 Bethenny Frankel of RHONY – I had so many Real Housewives of New York City alums (drink!) to choose from, whether it was Luann de Lesseps with her eggs a la Francaise, or Sonja Morgan with her toaster oven Hillbilly Sole Meunière, but decided to throw a bone to Bethenny since she started out as a health food chef before becoming a Philanthropist Business Tyrant. I’d most likely pass on her cookies, but still, dream about her avocado mango salsa from Scary Island.

Chris Bassett of RHOP – Blogger confession, Readers: I threw in Chris as a wild card so Real Housewives of Potomac is represented on this list. ESCANDALO. Still though, judging from my Google search, his catering food looks pretty darn good, so let’s give it to him! Or don’t! 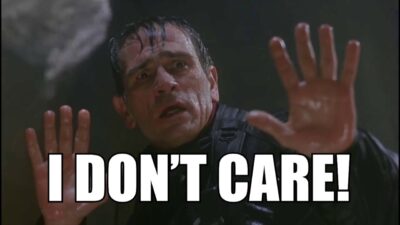 Ana Quincoces of RHOM – Remember Ana? Miami’s Hottest Chef? If you don’t, that’s okay. She was only around for two seasons before Real Housewives of Miami’s untimely death. Bethenny Frankel would probably be livid to see Ana (and another Housewife coming up) ahead of her on this list since Ana’s whole shtick is Skinny Latina, a clear ripoff of Frankel’s Skinny Girl brand. (I made Bethenny mad… oh wells.) Some of Ana’s recipes on her website look delicious if maybe a little meat-heavy. 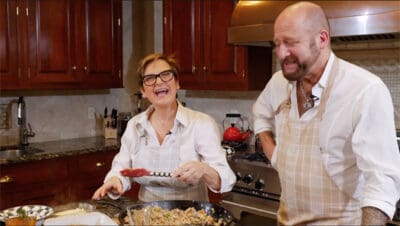 Caroline Manzo of RHONJ – I had to be careful not to choose too many cast members from Real Housewives of New Jersey because Italian food is SUPREME, and I didn’t want to turn this list into one big sausage and peppers fest. What I love the most about this franchise is beholding all the delicious meats, cheeses, and pastas they’ve busted out at parties over the years. Caroline and her family always looked like they had a blast in the kitchen, and they brought us one of RHONJ’s most enduring legacies: THE HAM GAME. 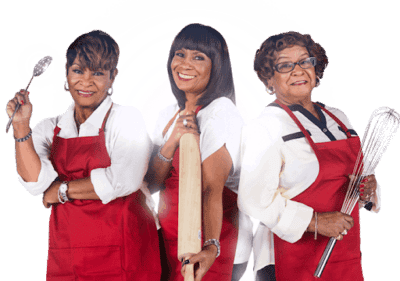 Kandi Burruss & the Old Lady Gang of RHOA – Southern food, ahoy! Who doesn’t love a little catfish, grits, po’ boys, and fried okra? Even though Mama Joyce is a tiny terror, and the OLG restaurant has mixed reviews, I always get really happy when soul food appears on my television screen, and get even happier watching people actually eat it (as opposed to watching RHOC and RHOBH wives push salad around on their plates for an hour). 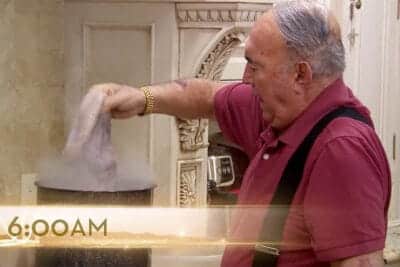 Teresa Giudice & Nonno of RHONJ – It pains me to say this because I don’t like the guy, but Joe Giudice should be included here, too. Teresa jumped on Bethenny’s “Skinny” train by doing Skinny Italian cookbooks, and while I inherently distrust anything with the word “skinny” in it, I’ve seen enough of Teresa’s cooking to know she can throw down. Two culinary scenes involving the Giudices stand out to me the most: 1) Nonno boiling a whole octopus at 6:00 in the morning, and 2) Joe grinding 100 pounds of Italian sausage in the kitchen. One of the only good things I can say about this family is that I admire their commitment to old-school food traditions. 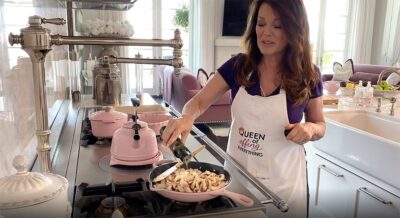 Lisa Vanderpump of RHOBH/Pump Rules – Lisa knows the secret to creating Sexy, Unique Recipes is to simply use the best ingredients available. Instead of just pasta, it’s pasta served in a Parmigiano Reggiano drum, topped with a flaming cognac sauce. Instead of just scrambled eggs, it’s eggs served with sturgeon caviar and shaved white truffles. DUH, PEOPLE, IT’S SO SIMPLE.

D’Andra Simmons of RHOD – D’Andra is one of those Housewives I don’t really care for, but still, highly respect her cooking prowess regardless. Let’s just say if she invited me over for donuts, steaks, a French Tarte, or Texas comfort food, I would SPRINT to her house. One of D’Andra’s cutest moments on Real Housewives of Dallas was when she and her husband Jeremy Lock held an at-home Iron Chef cooking competition while everyone else was starving at LeAnne Locken’s wedding. 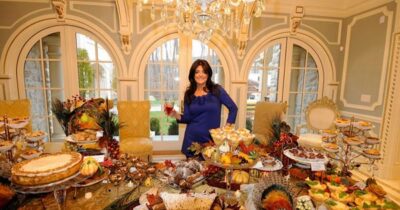 Kathy Wakile of RHONJ – HOLAY CANNOLAY, LADAY! Kathy isn’t just a great cook… she’s an artist when it comes to desserts. Every. Single. Time. they showed a dinner table spread at the Wakile residence, I would tune out Richie’s chauvinistic drivel, and drool over the food. Friends, I even rewound scenes so I could take in the Italian-Lebanese feasts Kathy put out. Also, if there is one person who would give Lisa Vanderpump a run for her money on food presentation, Kathy just might be that gal.

Alrighty! All this talk of food and cooking made me HONGRAY, so I’m going to fix myself a sandwich while you pick apart my list! Have a wonderful Sunday, Blurbers, and see you in the comments section!