by Elizabeth May 3, 2021 40 comments
ShareTweetWhatsappPinterestRedditTumblrMailFlipboard 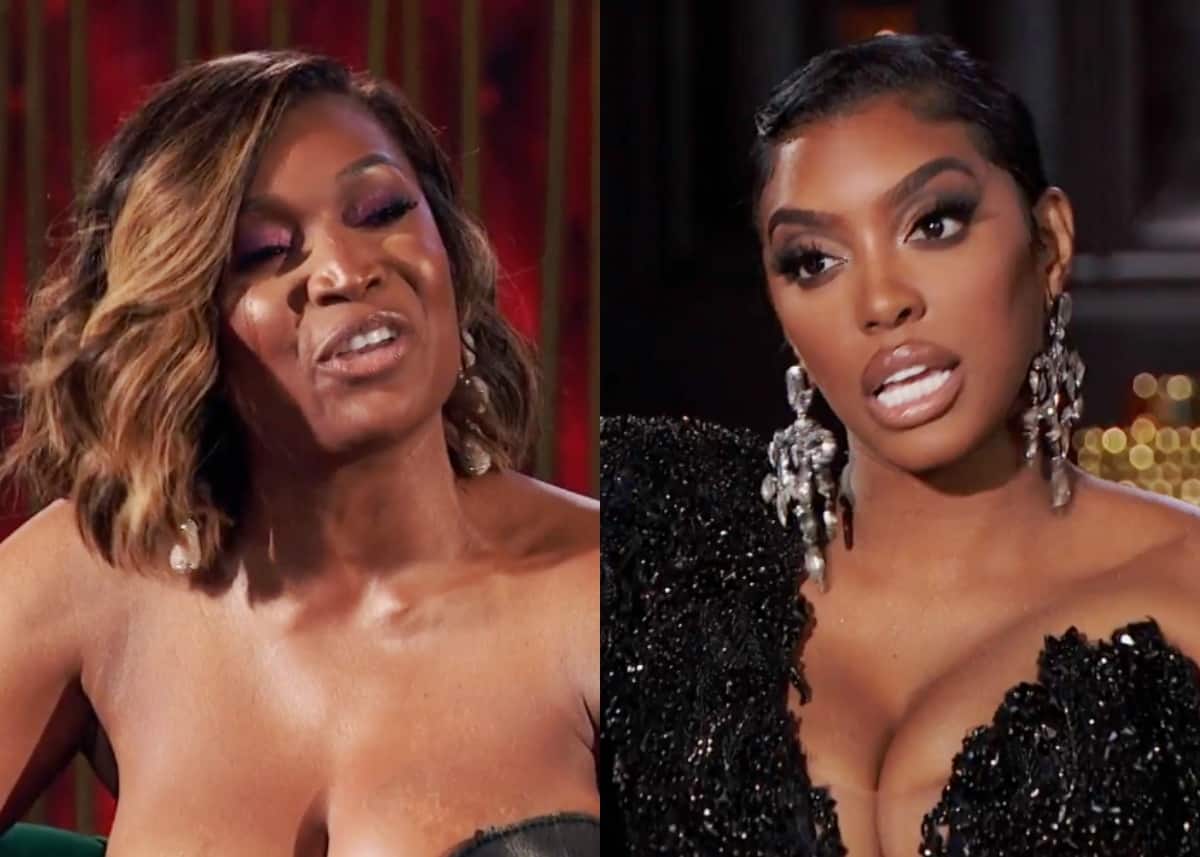 This week on the Real Housewives of Atlanta, our juicy peaches are back for round two of their reunion. LaToya is still getting her 15 minutes of fame. She has packed her STDs along with racy tidbits to help her earn her peach. Let’s do a deep dive into this sexy dungeon, shall we?

I always try to forewarn you all that haven’t watched yet when the episode is anticlimactic. Well, that is the case for this one too. Sorry to break it to all of you, but Bravo is going to drag us all along on this journey of debauchery to the very end. Let’s see what LaToya has brought with her to try and save herself and how the rivalry of Drew vs. LaToya began.

They debate what started this tiff, and it was all about a wig named Drewisha. It was literally wig shade at first sight. Drew was posting photos online tagging Kenya’s hairline over the hair battle. Kenya resents being brought into their wig battle. Drew and LaToya both loved trading barbs “talking about the husband.” She wanted to give LaToya a one-way ticket to Chi-town. Drew thought they had synergy before and got along.

Kenya and LaToya drag us through the girl crush stage of their relationship. I don’t think anyone wanted to have to re-watch that a*s kissing again.

Porsha and LaToya’s makeout session is shown again, much to my dismay. LaToya was grabbing that badonkadonk for dear life. Kenya was resentful of the flirtation between Porsha and LaToya. She did not think that LaToya had her back in SC when Drew and the others were coming for her.

Kenya is called out by LaToya about seeing her sexy parts. She will only admit to allowing her to see her cellulite on her booty. LaToya did have her booty picture on her phone. Did LaToya just say that Drew cheated on Ralph? Drew is adamantly denying it. Roll the tape, production!

LaToya then says that they had kissed. Drew admits to kissing girls in the past but will not own this one. LaToya doesn’t think it was a big deal that she shared the alimony story. Kenya tells her not to dumb herself down.

Kenya thinks that Drew was groomed by Porsha. She claims she was really kind and welcoming to her when she came on the show. Kandi gets asked about sharing the SC beach dirty-sand with Don Juan. She should have been called out on that one big time, but Kandi gets a huge pass for that one.

We are now joined by Marlo, who forgot half her outfit and in return might have made Andy straight. There’s also Shamea, who is wearing WAY TOO MUCH clown makeup and looks like she just walked off the Coming to America set. Thanks, Marlo, for that one! Shamea thinks she was channeling Diana Ross. Nope, not even close.

Shamea coronates Marlo as the auntiest. She then tries to earn that peach and calls Marlo out on her plastic surgery. Marlo is still claiming she had a back injury and not liposuction before Nola. She does admit to liposuction after. Well, we can all see that in that unforgiving outfit you have on today!

South Carolina and the food drama that ensued is hashed out. There was some serious culinary crime going on in that beach house. Kenya is slammed since she did not provide enough food to feed this crew of hungry peaches. Kandi admits she got hangry.

Kenya then gets called out AGAIN over bringing Brooklyn on the South Carolina trip. She does make a good point that Kandi also had the ability to make it happen to bring her baby, Blaze, on this trip. Kandi did bring a d*ck in the box after all. She says it was a production issue, but we all know that Kenya doesn’t follow the rules. Kenya won’t take on their mom guilt. Porsha has to remind Kenya that she is sitting right by Andy too. These women are aware of their product placing and know their value.

Kandi gets a little perturbed when Andy asks a viewer question about bringing her kids on the trips. She resents that one since Riley let us all know that Mama did that on the regular. Kandi thinks Kenya used Brooklyn to avoid the other ladies not being the better parent.

Kenya gets questioned about why she was able to hire a private jet. She claims it made more economic sense since Brooklyn could not be filmed. I admit I did miss seeing that beautiful baby this season. Thanks, Marc, who truly is the original d*ck in the box.

Kenya then shadily says that Drew has body issues. She gave her permission to wear Spanx to suck all of that stuff in. Drew informs her that she has female issues and there is a lot of yelling over each other. She must have a hysterectomy as a result. Kenya and Drew fight it out over their successes. Drew claims she has 400 million box office viewers. Kenya proclaims her rich but needs a job. She is truly jealous, just like she was of Kim Fields, who had a real acting career.

Cynthia now gets the heat turned up over her COVID-filled super-spreader wedding. She is ready and has rehearsed her speech to defend her selfish choices. Production shows a montage highlighting her 250+ wedding despite the warnings over large gatherings. Andy inquires about Mike, and Mr. Hill is still bicoastal and spending time with his lady friends. Cynthia says he now has a job in Atlanta and will move to Lake Bailey-Hill. I will believe that malarkey when I see it.

Cynthia acts like she had a safety plan for her wedding. She isn’t aware of anyone who got sick after attending. Wendy Williams even weighed in on her ignorance of the pandemic. Mike’s daughter, Ashlee, did not attend the wedding since they apparently had a private issue. Cynthia is having issues with her dad too since she kept bringing up his misdeeds on the show. She admits it has put a strain on their relationship. Cynthia asserts that she deserved this obnoxious and tone-deaf wedding since she never had one like this in the past. WOW, you have to give it to her. She just keeps pivoting and smiling her way through the debate.

Cynthia still has not got a postnuptial agreement with Mike either. She does not know how to protect herself or others. Cynthia should have put more energy into getting that done instead of planning a huge wedding.

Porsha’s past of calling Kandi and Todd rapists is being rehashed. Gosh, these two have come far after all their messy issues. They now are following each other again on social media. Marlo thinks they got close after the dungeon party. She thinks Kandi has dirt on Porsha and that is why they are thick as thieves now.

Kandi thinks her relationship with Porsha has gotten better since they are now starting to have fun together again. Porsha thinks they just communicate better. Kandi is definitely a forgiving person. It is still surprising how their relationship has come full circle.

We are now getting down and dirty watching all of the dungeon footage. Kandi is all about a party where everyone is climaxing. Porsha is heard saying that someone is eating her tonight. This is some Bolo after dark action going on. Kandi gives Andy a dungeon name: “Silver Bullet.” Kandi is using this platform to make more coin by planning a virtual dungeon party.

Andy asks Kenya why she was so sexually open that night and transitioned into Chocolate. She was into the moment and just letting her hair down. The coffee table action is brought up, and Porsha recalls LaToya being in her nether region. She got her wish for some “eating action.” Porsha denies anything happened since she was wearing a costume. She must have forgotten that the panties she was wearing were essentially dental floss.

Andy thinks their behavior was revolutionary. Hmm, not really. This stuff happens on the other shows too.

Marlo wants the elephant in the room to be called out. She has spoken to Porsha privately and she never told her the truth. Marlo wants Porsha to take off her crown and show her real face not the one she bought at the doctor’s office. She wants to know why their friendship has changed. Marlo surmises that her and Kenya being buddies has caused a rift between them.

Marlo keeps saying Shamila instead of Shamea. Sorry, that was funny. Porsha thinks that Marlo has just lost her mind. Marlo is fired up and is going to “sing like a bee!” She acts like she has to behave herself for her nephews while she is on TV. What about all of her extracurricular activities that go on in real-time? We now have a to-be-continued to get to the bottom of this filthy mess.

Next week, thank you, Jesus, we have the last episode of this season. We are still hashing out SC and the Prophet is brought up again. UGH, I need a glass of wine now after watching this! Have a wonderful week, everyone, and see you tomorrow night for some New York action!

ARE YOU TEAM DREW OR LATOYA?