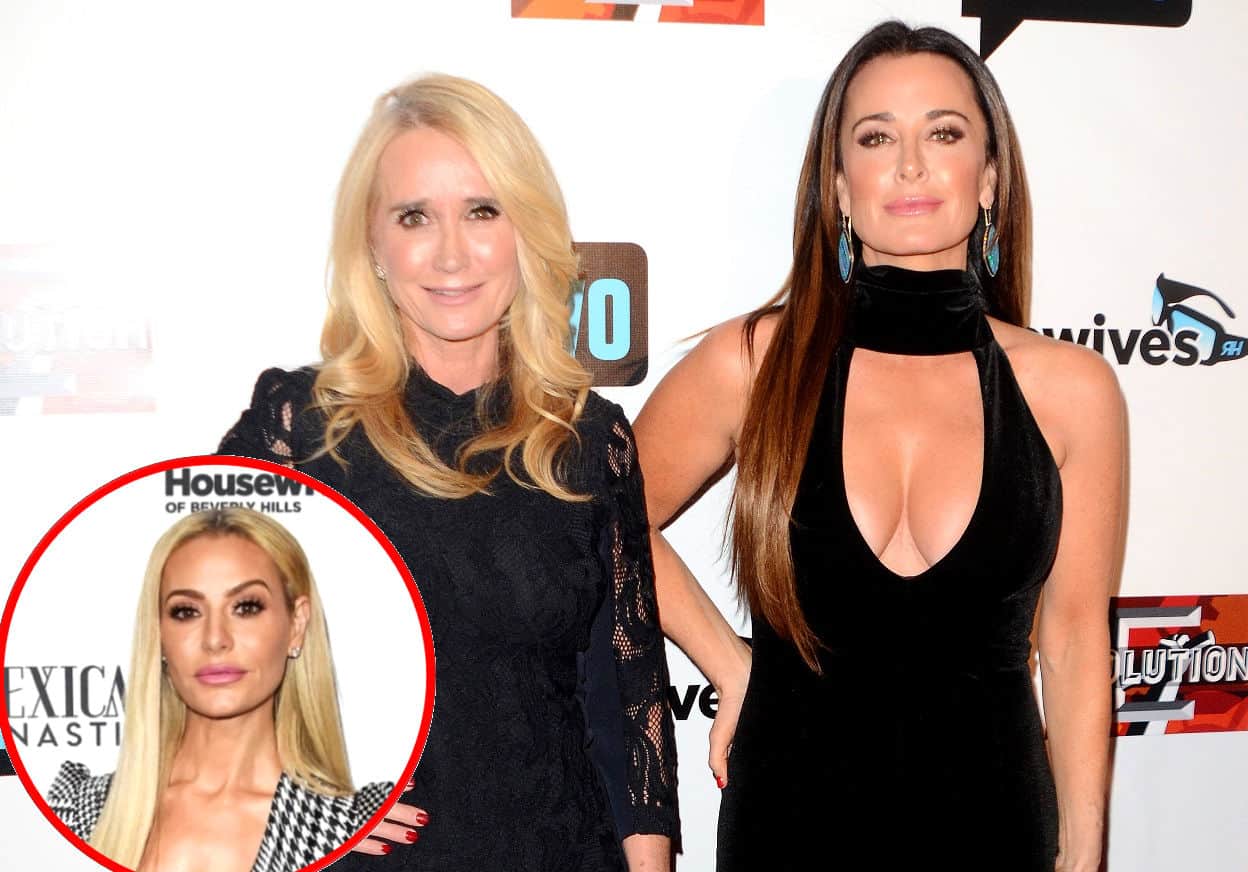 Kyle Richards reacted to a concerning video of Kim Richards on Twitter after her sister was accused of being “high.”

Following an outing between the two sisters and their older half-sister, Kathy Hilton, the Real Housewives of Beverly Hills cast member responded to rumors while also clarifying the comments she made about Dorit Kemsley‘s nose on the latest episode of the show.

“Kim looks high as hell,” a Bravo fan wrote on Twitter on June 9, along with a clip of Kim appearing to fall into Kathy as she slurred her words while talking to a photographer.

In the video, the photographer is heard asking, “You been doing good?” Kim then replied, “Yeah, I haven’t left my house since March.”

Then, when he asked if she was “staying out of trouble,” Kim added, “Yes.” But some fans online weren’t convinced.

At that point, Kyle spoke out in her sister’s defense, claiming Kim was acting like she was because she was anxious about her first post-pandemic outing.

“She hasn’t been in public in over a year because of COVID and she was anxious,” Kyle explained.

Following Wednesday’s episode of RHOBH, Kyle appeared on Watch What Happens Live, where she addressed the speculation surrounding Dorit’s potential plastic surgery and her alleged agreement that Dorit’s nose has been surgically altered.

“That’s not what I said! I actually believe it is all contouring and makeup. I think the other women don’t believe that,” she explained.

During the latest episode, Bravo shared side-by-side photos of Dorit in which the mother-of-two looked quite different in 1995 than she did in 2020. 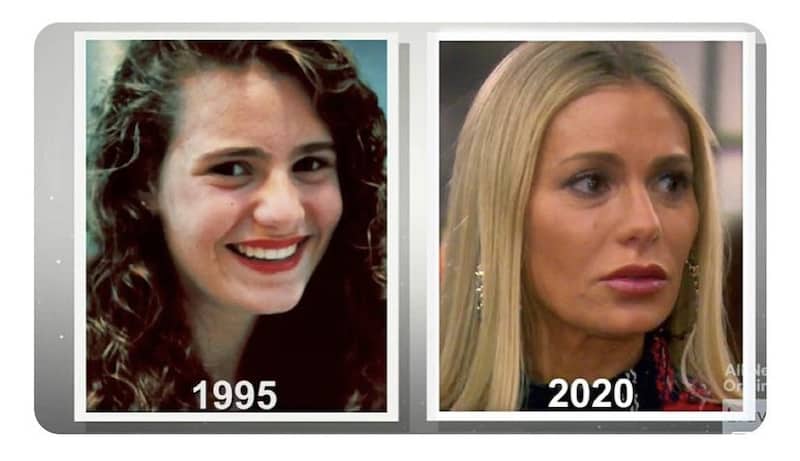 In addition to denying that she felt Dorit had a nose job on WWHL, Kyle also spoke out on Twitter and suggested that even the doctor who did her nose job didn’t believe Dorit’s nose was unnatural.

“Dorit even went with me for my nose consult and the doctor looked at her nose too. I do not believe she has had her nose done,” she shared on Twitter. 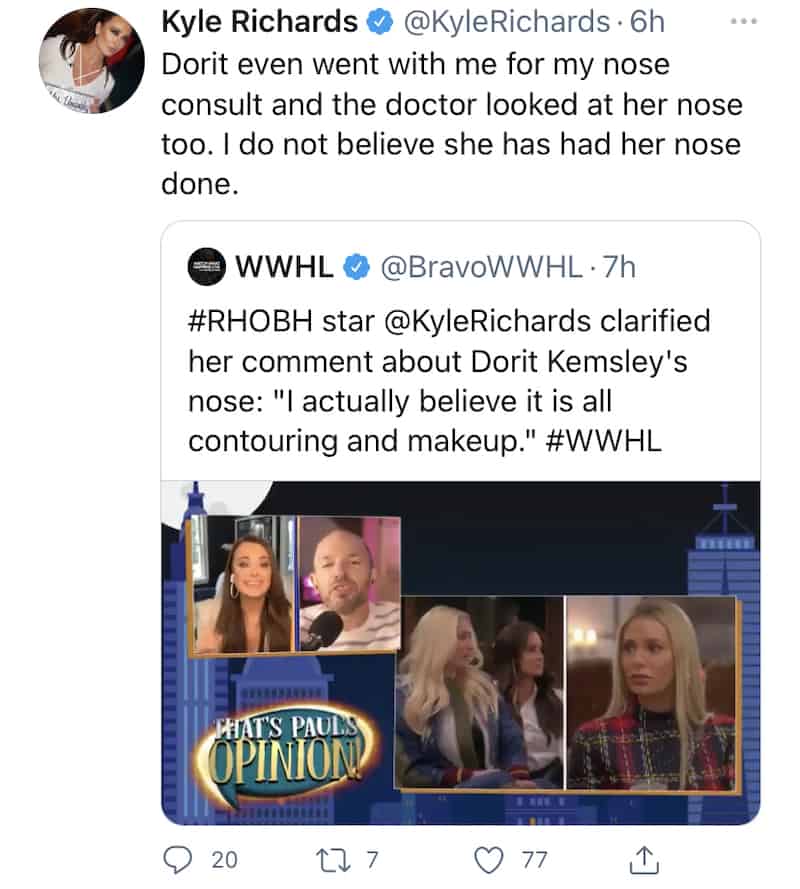 Also on Twitter, Kyle responded to a fan who wanted to know if there was anyone else, besides her family, who she would want to join the RHOBH cast.

“Is there any other friend or family member you have wanted on the show, but they said no or it didn’t work out for some reason? Kathy is a blast! Watching your dynamic with her is so funny!” the fan wrote. 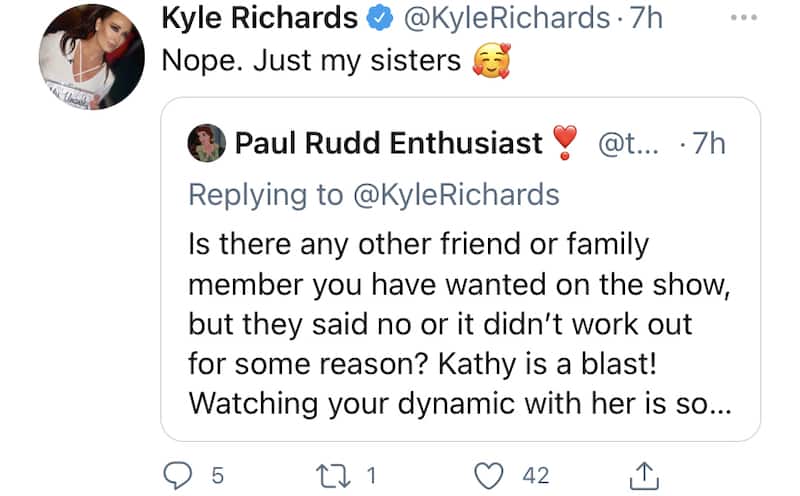