Erika Jayne has just been added to a $5 million lawsuit against her estranged husband, Thomas Girardi.

According to a new report, the Real Housewives of Beverly Hills cast member is facing claims of breach of contract and fraud as well as a sham divorce after she and Thomas allegedly used funds due to other attorneys to fund their “outrageously lavish lifestyles.”

In court documents obtained by Radar Online on June 21, the Law Office of Philip R. Sheldon and the law firm of Robert P. Finn claim they referred thousands of cases to Thomas and his law firm, Girardi Keese, “pursuant to an agreement to share in the attorneys’ fees paid when the cases settled,” only to be stiffed in the end.

The two lawyers who are suing the ex-couple “are both seniors who devoted the twilight years of their careers to working on these cases with the promise and expectation that they would have the resources necessary to retire once Girardi paid them for the services they performed.”

In their lawsuit, they noted that Thomas allegedly hid the money they were owed and refused to pay them their portion of the agreed upon deal.

Instead, the attorneys believe “Girardi embezzled and redirected the funds to family members, friends, partners, lenders, and creditors, and used the money to fund outrageously lavish lifestyles for himself and his wife Erika Jayne, who is better known as one of The Real Housewives of Beverly Hills.”

The lawsuit went on to claim Thomas and Girardi Keese “loaned” millions of dollars to Erika, who then filed a sham divorce “to fraudulently keep the money from Plaintiffs and other vulnerable victims.”

Thomas’ son-in-law, David Lira, who previously worked at his firm, is also listed as a defendant in the case.

In other RHOBH news, Erika was recently photographed pumping gas in Los Angeles.

these photos of erika jayne are how you know shit has really hit the fan pic.twitter.com/F0mw2tplac

Following the release of the photos, a number of fans spoke out in Erika’s defense, pointing out that full glam is far from necessary at the gas pump.

“Y’all don’t know sh-t about Erika cause this has always been her when she’s just hanging with her friends. but go off I guess,” one person wrote. 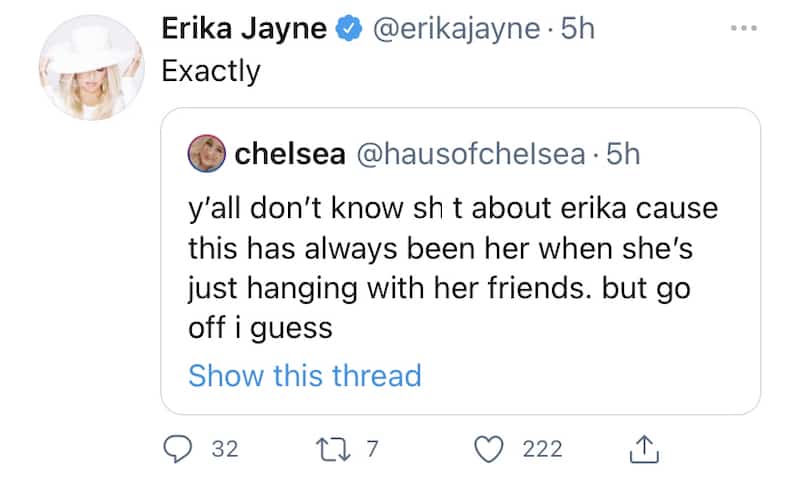 Another person shared a GIF, which read, “It ain’t glamorous, man.”

In addition to responding to the fans’ tweets, Erika also shared a post of her own, jokingly advising her fans and followers to be sure they are in full glam at the pumps.