Home Recaps RHONY Recap: Bershan Calls Sonja a Clown and Throws Ramona Under the Bus, Plus She Slams the Women as ‘Boring Grandmas’

RHONY Recap: Bershan Calls Sonja a Clown and Throws Ramona Under the Bus, Plus She Slams the Women as ‘Boring Grandmas’ 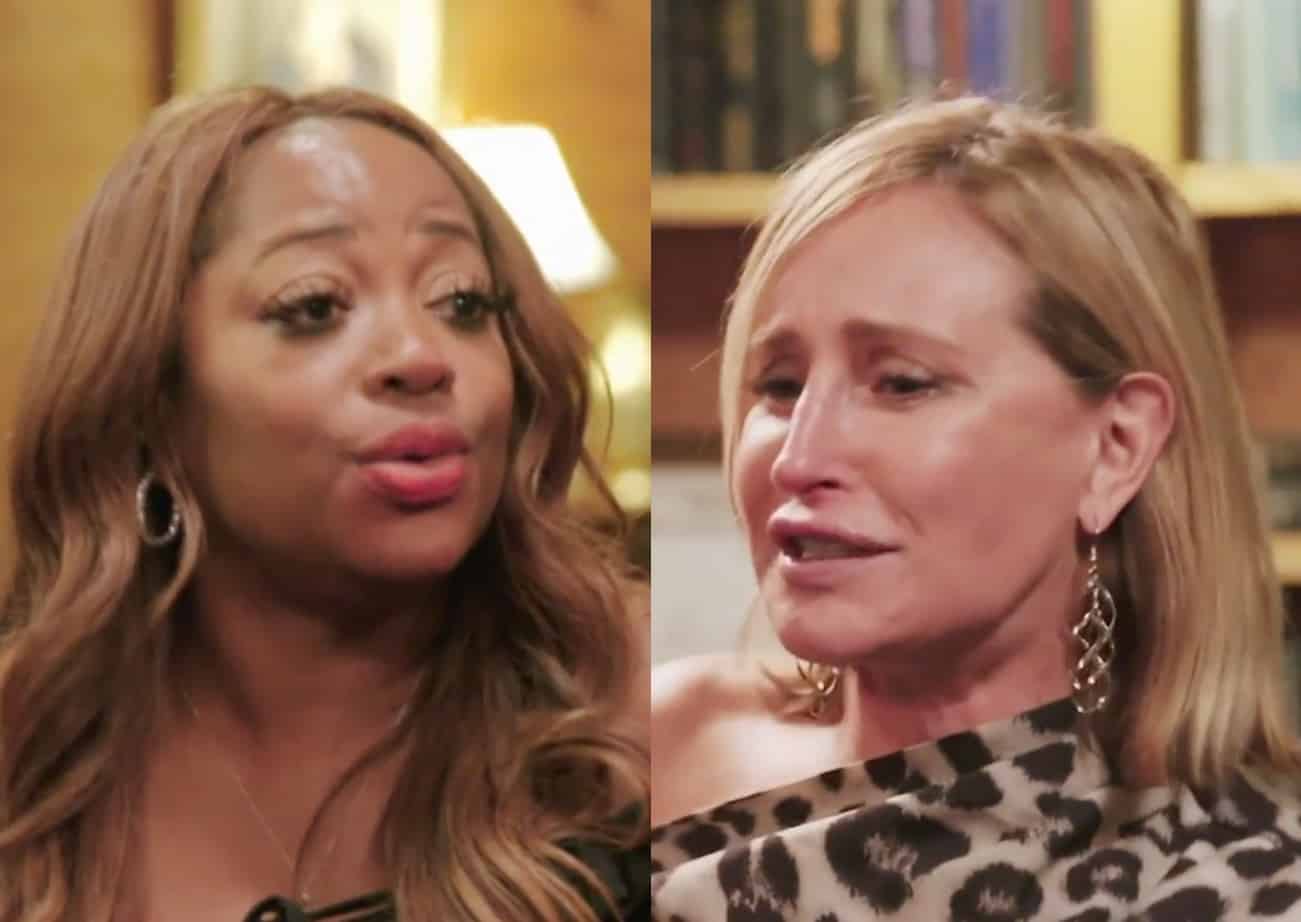 We are still in Salem with the Real Housewives of New York. Salem is sure a spooky place, but there is nothing scarier than a housewife who loses her sh*t figuratively and literally! Did Salem somehow create this hysteria with its dark undertones? Let’s watch and see!

I first have to chat briefly about the conflicting news stories about Ramona losing her HBIC crown and being fired. OK, it seems that Bravo has been trying to revamp some of their RH shows by firing the OGs. Bravo is saving some cash by getting rid of the high earners.

The problem I see is that they have created this problem in NY by trying to mess with the formula that has worked for some time. I agree diversity is important, but why choose someone who has no real organic connection to the original cast? And this applies to Leah as well. Eboni could have been a great addition if she took a little time to get to know the ladies BEFORE attacking their personal viewpoints. Bravo seems to be basically shooting themselves in the proverbial foot and pissing off its loyal viewers. I will now get off of the pulpit and get on with the recap. Side note: Eboni, thanks for the use of the pulpit!

Eboni declares this evening a disaster, but she doesn’t acknowledge she is the reason for it. She has literally been up on the pulpit preaching at the ladies and chanting “Shame, Shame, Shame” at them! Bershan is trying to talk to Eboni to let her know she is being too much and needs to know her audience. She tries to let her know how her message is lost by preaching too much. Amen, sister!

Sonja acts like she and Eboni are soul sisters and they get each other. She thinks the other ladies have a listening problem. Sonja wants them to open up their minds so they can escape their privileged bubbles. Now, isn’t that rich coming from Sonja?

Eboni asserts that Trump is the flagship for white supremacy. I don’t believe that Eboni would be OK if Ramona admitted she was a Trump supporter. Eboni keeps saying that she wants honest and authentic conversations, but she is missing what is unsaid. Ramona doesn’t want to get into a verbal altercation with Eboni. She is smart enough to realize that she can’t defend her choices as eloquently as Eboni can. Ramona has decided to remain silent on this political issue. She can see that Eboni has been given a platform this season and Ramona is no longer the main attraction.

Eboni and Luann chat about the word white supremacy and how it is an inflammatory thing to say. Luann wants to have open conversations, but Eboni has been coming at them hard and fast.

While at dinner, Leah seems to be constipated, and then she is forcing out some sobs. Leah, who can’t resist an opportunity to become the center of attention, starts sobbing. Eboni shares that her grandma passed away THIS MORNING. Can this woman allow Eboni to share this personal information and stop making this about her? Why didn’t Eboni share this sad news earlier? They would have been supportive of her and allowed her to mourn her grandma. Eboni said she didn’t want to spoil the good mood and didn’t want to bring anyone down. She could have received some support and found a way to connect with these ladies. Missed opportunity, I say!

Eboni decides to get a tattoo with her grandma’s name, Katie. Ramona tries to talk Eboni out of getting the tattoo. She tries to distract Eboni so it is less painful. Eboni says, “Bentleys don’t advertise,” but she is doing this to honor her beloved grandma.

Leah decides to get another tattoo and she thinks it is such a coincidence that they both lost their grandma two weeks apart. She gets Marie tattooed on her hand, and that is a fitting way for Eboni and Leah to honor their loved ones.

Poor Bershan is trying to determine if Sonja ever makes a logical point on anything. Nope, that never happens. We will see later in the episode how being stuck with Sonja throughout this episode sends Bershan over the edge. Sonja can drive anyone insane with her incessant rambling and bizarre behaviors.

The next morning, Leah gets a call from Ramona, who launches into a long monologue filled with a bunch of nonsense. She gets a headache from the conversation. Sonja then calls, and Leah tells her that Ramona gave her a splitting headache. Ramona, who is in the room, yells out, “I am right here, b*tch!” Busted, Leah!

In Bershan’s hotel room, she tries to convince Eboni that the ladies don’t want a pastor — they want a friend. They don’t want the Malcolm X speech. Bershan thinks Eboni’s in-your-face approach is counterproductive. Eboni claims she is done preaching and is ready to get off her pulpit.

Sonja tries to get Ramona to talk about something else besides her eyebrows. Ramona keeps raising her hand to change the subject. Sonja tells Ramona that her eyebrows make her look like a drag queen similar to Luann. Poor Luann is always being compared to a drag queen. That is not cool…

Leah plans for the ladies to go to Pioneer Village. They have to dress in theme and wear bonnets and coats. Luann and Ramona are not interested in dressing up in those unflattering costumes. They run and hide in the ladies’ room. Eboni has no interest in putting on a colonizer’s uniform. The only ones who are game to dress up are Leah and the faithful follower Sonja.

Sonja tries to tell Bershan that she doesn’t need to drink. She rambles on and I think I see poor Bershan’s eyes rolling back into her head. Sonja tries to bullsh*t Bershan and tells her the water pill story and countless other excuses for her alcoholism.

Leah and Eboni overhear the conversation, and they both commiserate about Sonja. She is literally on the crazy train and can’t get off. They are correct in saying that Sonja blames everything that is wrong with her life but the alcohol.

Back at the hotel, OMG, Sonja walked into Ramona’s bathroom and steps in her poop. Ramona pooped on her floor again but blames it on her makeup. Darling, that color is not in anyone’s color palette! Sonja takes care of those issues by wearing a diaper, which she now needs since she just peed her pants.

The ladies decide to head out to an Italian restaurant. Luann shows off her Italian while chatting with the owner. She is showing off to Eboni and proving that she is an educated woman!

Bershan then decides to stir the cauldron and calls the ladies a bunch of boring grannies. Luann is annoyed that she is called a granny and it is pissing her off. Luann will not allow anyone to insult how she looks and acts. Leah acts all self-righteous like she hasn’t age-shamed all of them at other times.

Bershan then pivots again and changes tactics. She was expecting a fun girls’ trip and this trip has been stale. Bershan is exhausted over suing everyone and fighting over her eggs. Luann doesn’t want Bershan scrambling anyone’s eggs.

Bershan tries to get Sonja to stop acting like a f*cking clown and to quit her one-man circus act. Sorry, that is Sonja’s whole identity. Luann demands to know who Bershan thinks she is. The poor waitress tries to get them to focus on ordering dinner. Bershan, in my humble opinion, just cannot stand being subjected for one more minute to Sonja. The other ladies have built up an immunity and have learned to drown her out. Sonja is one of those friends that YOU can call a sl*t-clown, but don’t let anyone else do it!

Sonja, honey, you do act like a clown with/without drinking. Ramona decides to climb up on the table and starts dancing like Elaine from Seinfeld. Sonja is resenting the fact that Bershan doesn’t want to get sucked into a discussion with her. Bershan wanted some escapism and she means from sitting across the table from Sonja!

Bershan then pivots again and tells Leah that SHE said the smartest thing today. She loses me when she says that about Leah. Bershan then outs Ramona by telling Leah that she said they have no real connection. Leah thinks that Bershan is trying to start a fight diversion so she can escape Sonja.

Ramona feels like she is stuck with Bershan since she brought her. The rest of the group leaves, except Sonja and Ramona. Did Sonja just say that Bershan is dividing their group? Sonja can’t believe that Bershan is a life coach. Ramona is frustrated that Bershan threw her under the bus and did some truth-telling about Leah. They are being so loud in the street people are looking out the windows at them.

Bershan decides to make nice with the ladies back at the hotel. Ramona and Sonja are drunk off their a*s on the elevator. Bershan admits she is a bit of a blabbermouth. I am going to give Bershan a HUGE pass since she has been subjected to Sonja all day and that could drive anyone bonkers!

Leah and Ramona talk about their differences. She thought they were good, and the fact that Ramona doesn’t think they have a connection hurts her. Ramona is annoyed that Bershan outed her to Leah. Sonja and Bershan are STILL going back and forth in this crazy display of insanity. OMG, again another to-be-continued?

Next week, we have a physical altercation between Bershan and Sonja? The séance is finally conducted and it looks super spooky! Take care, my fellow Blurbers, and see you next week!