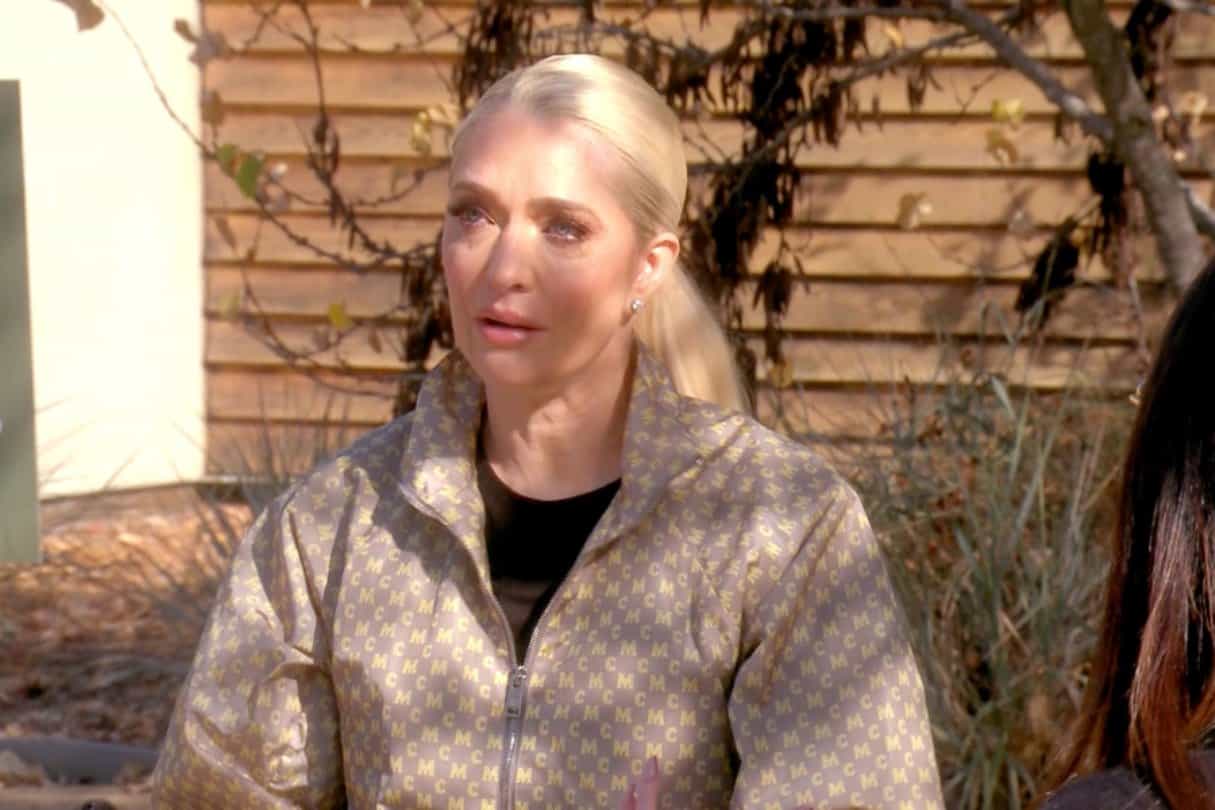 LOTS of tears on this episode of the Real Housewives of Beverly Hills. It basically sums up all of 2020 in one hour with crying, COVID, and virtual hugs. Relationship expectations are lowered and rumors swirl. Sham or not, there’s a story to be told here, and Erika is here to tell her side… kinda.

Post the “ugly leather pants” comment made by Sutton last episode, there is an attempt to calm Sutton down by everyone BUT Crystal. Lord knows that is no surprise. Sutton states that she should not have said that to Crystal, as, “I think they were pleather, not leather pants.” Touché. Amidst the de-escalation, Garcelle lets Crystal know that the word “violation” threw everyone for a loop. Crystal refuses to recant her language choice and Garcelle kind of throws her hands up, cuz if no one is budging, this argument will drag on.

Eventually, the whole group sits down to try and hash out the issue. It does not go so well. Sutton states that Crystal’s presence simply triggers her and Crystal retorts, “You’re upset because you want me to apologize for something that you did. You’re an inappropriate awkward person. Period.” No one can believe that Crystal went *there* and Sutton is flabbergasted.

Sutton asks Crystal to take back calling her manic as it hits close to home since her father committed suicide and suffered from mental health issues. Crystal is really good at making non-apologies and mumbles some half-a*s, carefully chosen words to satisfy Sutton’s need for an apology. Time. To. Move. On.

Four days later, the drama continues. Kyle, Kathy, and Dorit (where is she this episode?!) have all tested positive for COVID, so now everyone must quarantine. After the second week of the cast quarantine, big news breaks. We all know THE news: the headlines about fraud and embezzling funds from the victims of Tom Girardi. Suddenly, Erika’s name is everywhere, and no one can avoid wondering, just how much did Erika know?

Erika’s divorce gets called a sham and an attempt to hide assets. Let’s all agree the timing of Erika’s divorce is a bit shady, considering she was talking highly of him a few weeks before on that girls’ trip.

While FaceTiming with COVID Kyle and Rinna, Erika claims that the rumors swirling are just that — rumors. She shares that it took a lot of courage to leave Tom, and she is tired of being called names. First, it was a gold digger, and now, it’s an embezzler. Rinna and Kyle hear Erika’s side of the story, but no one can understand why Erika is named in the lawsuit if she has nothing to do with the allegations.

Erika states that having millions of dollars of lawsuits being sent her direction is draining and upsetting and depressing. Maybe if she decides to sell a couple thousand of those purses in her closet, she may be able to afford her legal fees.

We are reminded that Erika was named in a different lawsuit two years ago, and when she asked Tom about it, he told her not to worry about it. When Erika pressed for more information, Tom refused to share, which would further prove Erika’s reason for divorce: Tom is mean and “vicious.” Wish we could replay all the times in the past when Erika gushed about Tom. OF COURSE, Kyle reminds the world that she knows how to deal with anxiety, so Erika can call her any time. Rinna repeats that they know Erika was not guilty of these allegations and they are sticking by their girl.

Five days later, Rinna and Crystal pay a visit to Erika’s “unfinished bungalow.” As Erika pours champagne (eye-roll), she continues to repeat that she had no idea about any of the headlines. Sham divorce? No way. Hiding assets? Get out. Nice little jab from Rinna there as she looks around at Erika’s “small” house: “Doesn’t look like you’re hiding any assets.”

Erika refuses to have Tom’s actions ruin her life and worries that this may be where it ends for her. Crystal straight asks Erika if she knew and Erika adamantly denies knowledge of his embezzling. Erika equates this situation to mile one of a marathon, and she knows this is going to be a tough year ahead.

In the meantime, Garcelle and Kyle have a socially distant date that seems a little bit like Romeo and Juliet. There’s Kyle yelling from her balcony and Garcelle comes bearing gifts. These two have come a long way — look what a global pandemic can do for friendships. They holler/talk about everything from the La Quinta girls’ trip to the drama surrounding Erika. Kyle and Garcelle both believe Erika is innocent. Garcelle knows from a past relationship that husbands can hide secrets.

Before wrapping up their visit, Rinna and Erika plead with Crystal about money. Erika essentially warns Crystal of her potential future if she does not ask questions about finances and become knowledgeable about her bank accounts.

Later, Rinna puts on a show for her daughter Delilah (and us) as she parades through her garage (yes, you read that right) and pulls out designer dresses that could one day be her daughters’. It is so funny to see these snazzy gowns just chillin’ in wardrobe bags. I guess Rinna can use those to bribe her kids to come back home.

Kathy howling at her dog is everything I need right now in my life. This lady is something else. Kyle comes over to visit and views Kathy’s creepy doll wreaths — WTF. Kyle soon melts down and cries in Kathy’s arms. She worries about her children, especially Portia. Kyle dislikes that Portia is comfortable being alone and is concerned that she isn’t being a kid. This struggle is real. After the waterworks, the sisters discuss the Erika drama. Kathy relates life to a poker game, where everyone has to show their cards. Leave it to Kathy…

Wait — Sutton has kids?! Multiple? Porter is Sutton’s oldest daughter and Rinna gets introduced to her for the first time. Sutton explains in a confessional that “Porter is not allowed to have lip fillers.” Throw some more shade at Rinna. Porter is a beautiful, intelligent 18-year-old, and I can’t help but laugh thinking about a playdate between Porter and Amelia Hamlin. Imagine? Sutton’s prim and proper daughter + Scott Disick‘s GF? Ha! 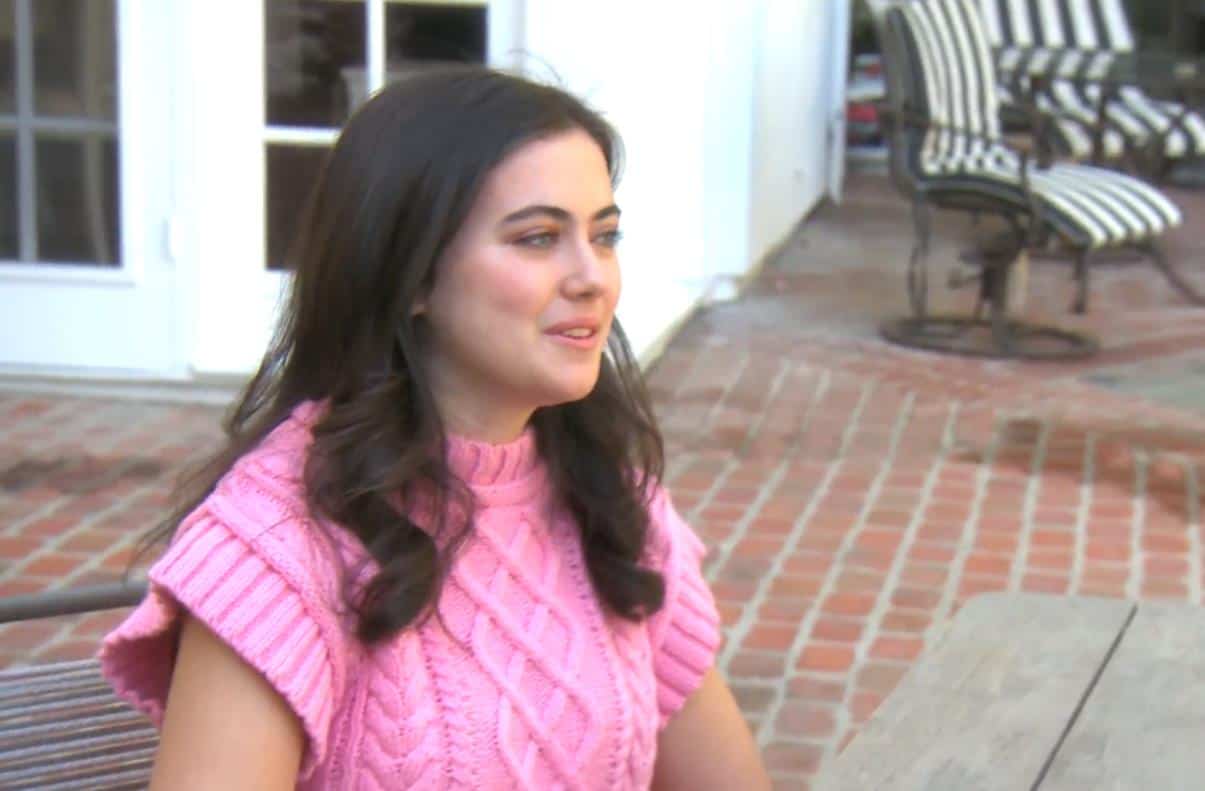 Later, Erika meets Kyle for a walk, and she immediately melts down when she sees Kyle. She tries to hold it together and can hardly get through talking without having her mascara run down her face. Erika states she could have never predicted this happening. “I have such a story to tell. I can’t tell it because it’s not the right time.” WHEN IS THE RIGHT TIME, ERIKA?! Erika is so tired of defending herself, especially because the divorce is not a sham and she claims that she does not know about the fraudulent allegations. Erika is lonely and explains how quickly people have turned on her or distanced themselves from her.

Erika has not talked to Tom since the day she left him and scoffs at the fact that Tom wants her to pay his lawyer. Erika is running with this moment and shares that Tom was a different man behind closed doors. She states that right around Chicago, Tom asked Erika, “Who the hell do you think you are?” Erika tells the world that Tom is certainly not an angel and no one knows what truly happened in their marriage. “I’d go to hug him and he wouldn’t hug me back.”

She attempts to remain stoic and only now are we learning about the conflict that went down in the Girardi household. First, it was how horrible he was to her, and now, it’s that his health was declining and Tom refused to do anything about it.

According to Erika, Tom was a very “proud” man who wouldn’t listen to her whenever she tried to address his health issues, sometimes telling him: “You can’t see well. You can’t hear. You’re f–king degrading in front of me and you’re ignoring it.”

I must say Erika is pulling out all the stops. She explains to Kyle that this was not the end she thought it was going to be with Tom and states that this is torture. You know what else is torture?? Erika not acknowledging the victims. Not once.