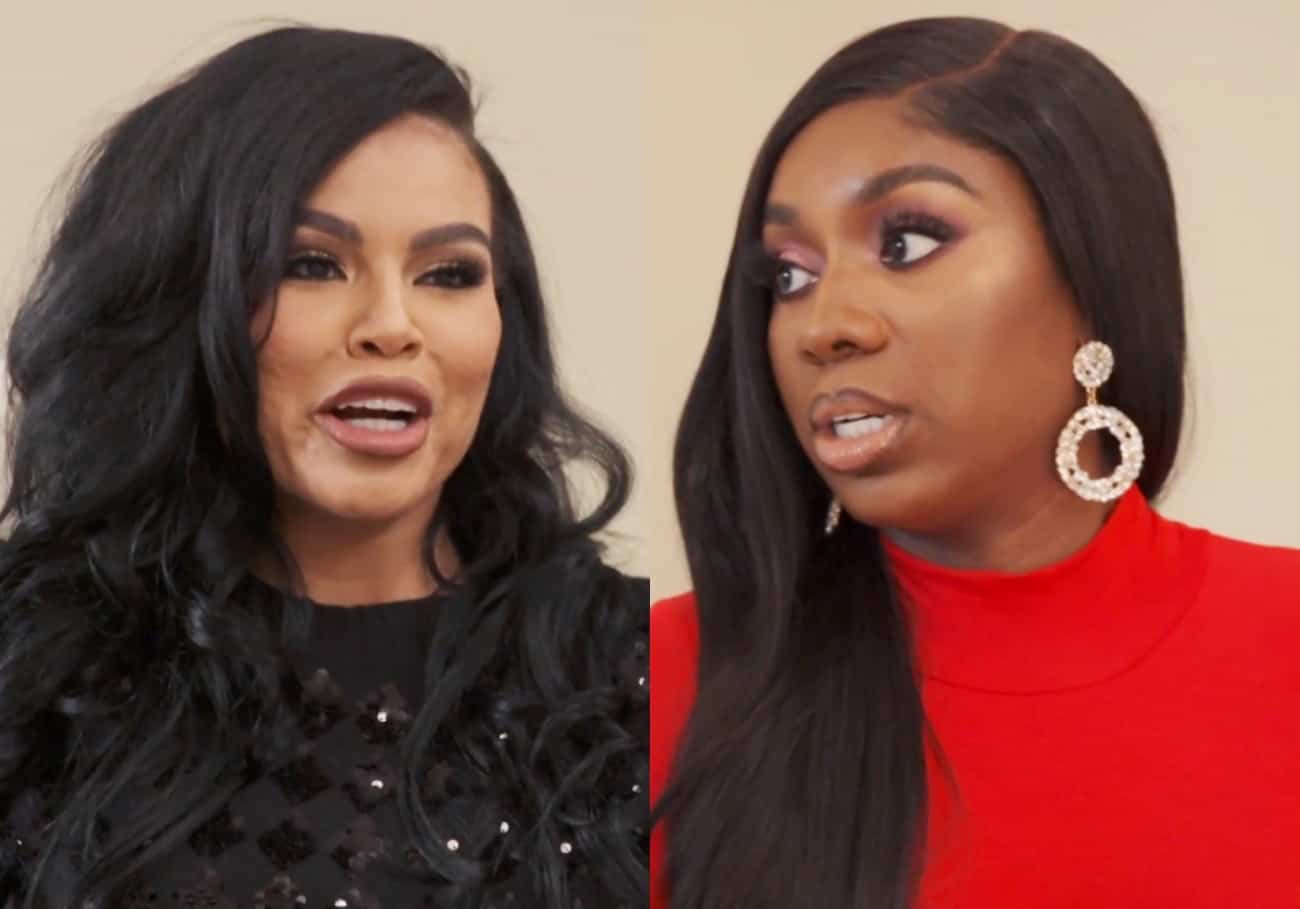 Let’s head back to the town full of smoke and mirrors with our Real Housewives of Potomac. Will the broken whore from Hampton (Gizelle) be able to decipher the shade Karen is throwing? Let’s watch and see!

Gizelle is just not following the Sing-Sing comment since she isn’t too bright. Robyn thinks it is a TikTok thing. No surprise there either — she is totally clueless. Karen actually should have said a mental institution like Oregon State Hospital from One Who Flew over the Cuckoo’s Nest.

Karen admits while on WWHL that she thought Sing-Sing was a loony bin. Is she alluding to Gizelle’s mental health issues? Karen is really gunning for Gizelle this season, and if I was her I would lay low since Karen is a sniper from the side. She knows where all of the bodies are buried and she is prepared to grab her shady shovel to dig them up if necessary.

Karen starts calling Gizelle a liar and says that’s how she earned the moniker the “First Lady from Hell.” Ray apparently told Gizelle that her looks will fade with age. Now that is some truth, you all. Gizelle suggests that Ray won’t live long enough to be able to see that. Karen has taken this to mean that Gizelle is wishing him death. I agree that is a bit of a stretch, but Karen wants Gizelle to take her lying hot box and go home.

Mia decides to chime in and CLAIMS she is a good judge of character and that Gizelle has a beautiful heart. Give her some time, sweetness, she will show you how dark and ugly that heart can be.

Wendy thinks the other ladies need to stay out of it and not gang up on Karen. She must have a premonition that she will soon become the target of the green-eyed bandit when she goes after her beloved Eddie. Wendy thinks Mia’s loyalty should be solidly behind our Grande Dame.

Robyn, who is wearing an outfit that is tacky AF in her ITM, can’t believe Wendy is defending Karen. I can’t believe you can defend wearing that hideous outfit on TV! Karen SUPER-SHADILY asks Robyn the question we are all asking, “When are you getting married?” Robyn should be prepared to answer this question, but as we all know she isn’t very quick on the uptake. She just can’t think fast enough to come up with a snarky rebuttal to Karen, and she lamely says after COVID.

Side note: I feel for Chef Tia having to observe these ladies behaving badly. All she wants to do is serve them some yummy-looking food.

Wendy wants to show off her hot bod AGAIN, but she guardedly says she had some tweaks a*s done. She now wants them to lick and bite her nipple cupcakes. Wendy is sure proud of her new bod and justifies wanting to rebuild her body. Mia thinks that Wendy only owns it now since she already spilled her plastic tea. She shared every procedure she had and then some — TMI on the clit procedure.

Mia asks the other ladies for their phone numbers, specifically Gizelle. Wendy sees Mia cozying up to the green-eyed bandit and showing some disloyalty to our Grande Dame. She definitely seems like she is friendlier with Karen this season, and I think she has chosen a good one to form an alliance with.

We now learn more about Mia, who wants you to know she has earned all of it! She shows off her gorgeous 3,700-square-foot penthouse with a balcony and a harbor view. We also get to meet her hubby, Gordon or just G. Mia has a precious little girl named Juju and a son named Jeremiah from Gordon. She also has another son named Joshua from a previous relationship.

Mia mentions how she got over their age gap when she saw Gordon’s bottom line what a wonderful man he was. Gordon calls Mia out on taking work calls. Mia thinks he forgets how hard it is to be a CEO and a parent.

Candiace has a part in a pilot called Family Reunion, which coincidently resembles her current home life. Chris, the husband-ger, calls Candiace. He asserts that his a*shole management style will come in handy dealing with his moody little songstress. #doubtful

Ashley’s mom, Sheila, comes by to visit and catch up. She shares that Michael and Sheila have been brought together by Dean. Wow, they actually hugged it out? Did he grab her a*s while doing it?

Ashley hired a nanny named Daisy to help out this time around since she dealt with some serious postpartum last time and a hubby with a wandering wiener. Ashley, in her ITM, describes what she and Michael have been doing to satisfy each other in the interim. Sorry, I need a moment, that visual was disturbing.

Robyn visits Gizelle’s west wing home, and it has no curb appeal. She thinks the outside is a hot mess but she won’t tell her that. Is that a Versace comforter, and Gizelle wants to christen it? Bleck! Gizelle looks like she ate a lemon when asked about Jamal. She finally admits that Jamal is living in her phone. Robyn isn’t surprised that these two aren’t together anymore. Neither are we, my dear.

Karen and Ray are in their bedroom making their bed. We get a flashback where Karen describes her little sex pillow, which sometimes gets wet. The camera zooms in on her bed and I literally closed my eyes so I didn’t see the shiny pillow! Karen tells Ray she is planning a love luncheon where you can bring your significant other. She is inviting everyone –even Gizelle.

Wendy has her mom, Susan, and her sister, Ivy, over for some dinner. At the table, Susan describes her boobs as flapjacks and she wants to show them. They are all like, “Hell no!” Susan wants them to pay for a boob job by the end of December or she is suing them for boob neglect. She surprisingly had no issue with Wendy’s boob job but she took issue with Wendy changing careers.

Wendy wants to launch a new home essential candle line. She has designed the actual candle but hasn’t created a business plan for it. Wendy is using this platform to sell candles? UGH, another candlemaker like Meghan from RHOC? Susan is supportive of this idea, but Wendy needs $20k of Eddie’s cash to bring it to fruition. That didn’t work out too well for Meghan when Jim financed her candle line, did it?

Little Miss Ashley is discussing taking her placenta pills after the baby’s birth. She hopes this will help with her postpartum issues. Karen comes over to visit, and she wants to invite Ashley to her love lunch. She is inviting Michael too. Times have changed. Ashley wants the story behind Sing-Sing. Karen just thought it went along with hot box and didn’t care that it was nonsensical. She has to leave quickly since baby Dean wakes up and screeches in fright when he sees her.

Gizelle is chatting with her girls about dating. She used to date gang members and athletes. I love when her daughter says she wishes her dad was in the NBA. Gizelle really should teach them to not emulate her at all since she stood by Jamal. She gets called out by her girls for not being emotionally supportive and being honest about the facts. Is it just me or do Gizelle’s daughters seem to have a little contempt for their mom?

We are now at Karen’s love luncheon! Robyn got the invite, but Juan isn’t interested in going to that or being with Robyn. She can’t go either since she got stuck in Gizelle’s bush and can’t weed whack her way out. Mia arrives with her hubby, Gordon. Wendy and the very dapper Eddie arrive next and they are all making niceties with each other. Ashley arrives without Michael, who is allegedly with Dean and probably trying to grope the nanny.

Candiace and Chris arrive for the lunch, and she is apprehensive about this. She is still healing over the knife she thinks Karen stuck in her back. Candiace really needs to hold a grudge with the person who did her makeup, specifically the yellow eyeliner in her ITM. Karen greets Candiace, and she invites Karen to see her new home. Let’s move on, ladies, from last season’s drama!

Mia bizarrely shares that she hasn’t had a vaginal birth since she has had all of her babies by C-section. She and Gordon get it in a little too much. Candiace is perplexed that she is already hearing about Mia’s busted bean.

Mia talks about “mishing” with someone. She has concerns now over Gizelle, who wished Ray dead. Wendy calls Mia out for getting friendly with Gizelle, and Mia isn’t taking too kindly to that! She tells Mia to not come for her. Wendy doesn’t want Mia putting her hand on her face. Candiace looks all perked up now watching this play out between these two strong personalities.

Zen Wen decides to not engage with Mia. Mia thinks that Wendy is jelly and that is why she is coming for her. There might be a little truth to that? I see this as a battle between Miss Bossypants (Mia) vs. Miss Smartypants (Wendy). The so-educated one is a little threatened by the younger model.

They decide to play the Newlywed Game and we find out some things that we probably would rather not know. The first question is, “What is your favorite sexual position?” Chris and Candiace are lady-on-top people. Wendy and Eddie are into doggy style. Mia and Gordon are missionary folks. Next, we have the best sex location: Karen and Ray made Rayvin on the kitchen counter. Geez, I hope they used Clorox wipes on those countertops! Mia and Gordon had sex in a Waffle House bathroom. #classy

Now the couples have to answer, “Who would they be attracted to in the friend group?” Gordon and Mia choose Karen. Karen says Mia. Ray chooses Katie? Eddie and Wendy don’t want anyone else, and he isn’t deviating from Team Wendy at least not publicly. The camera just panned to Mia and I think her face froze up from all of the Botox.

They all share how they met. No shocker here — Mia and Gordon met at a strip club where she was allegedly a bartender. Candiace isn’t buying that Mia was just a bartender at the strip club. Neither are we, Candiace. Ashely has figured out the need for the clit surgery! Mia was performing and the clapping motion puts a lot of stress on the clit! Wendy and Eddie win the Newlywed Game, but will they survive this season when Gizelle starts spreading rumors about Eddie? Time will tell…

Next week, Zen Wen is losing her Zen! Juan is STILL trying to get Robyn out of bed, and we meet Askale Davis. Happy Monday, everyone, and have a wonderful week!