Home Below Deck Mediterranean Below Deck Med Recap: David Makes a Move on Malia; Chef Mathew Preps for His Final Day on Board; Plus, Lloyd Opens Up to the Crew

Below Deck Med Recap: David Makes a Move on Malia; Chef Mathew Preps for His Final Day on Board; Plus, Lloyd Opens Up to the Crew 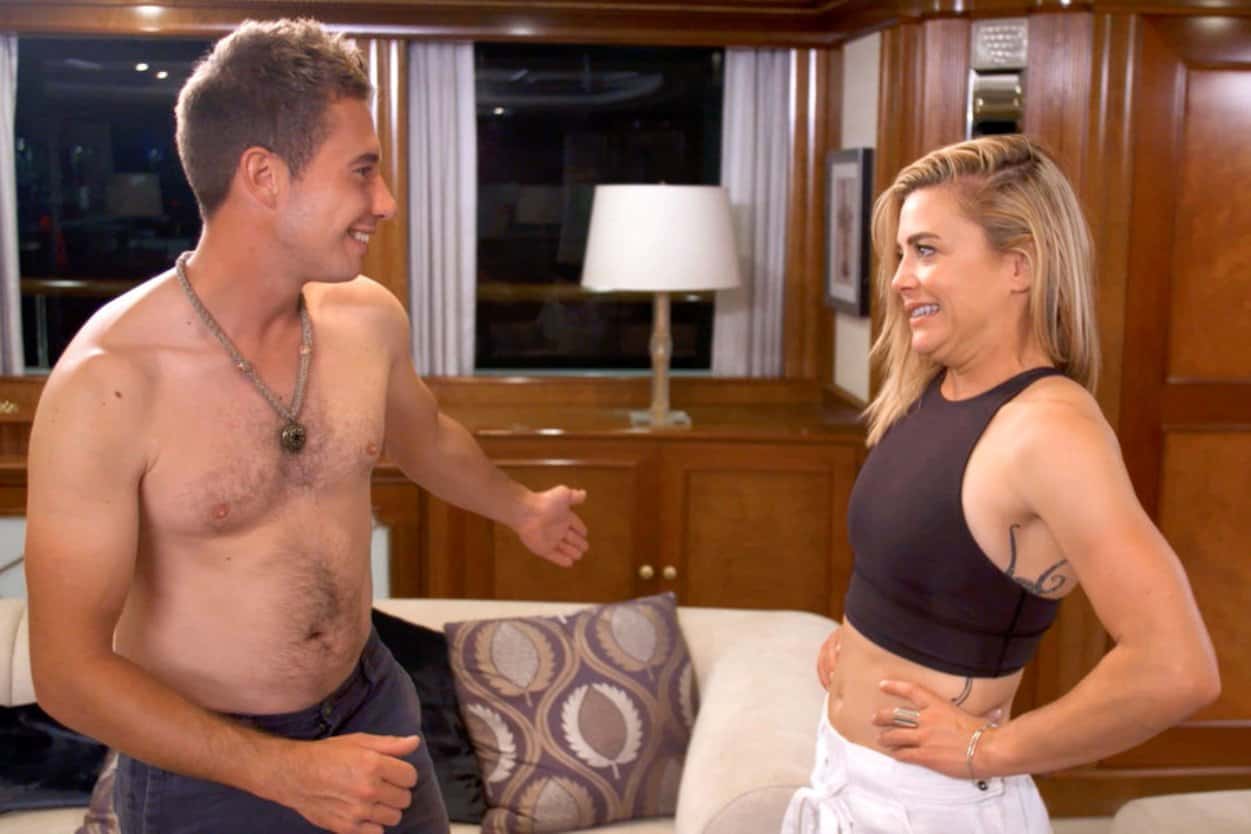 Success coach Athena and her entrepreneur retreat are really pushing the crew to their limit on this episode of Below Deck Mediterranean. Sure doesn’t help that the crew is in reset mode after a drunken night showed the ugly side of Lexi and caused the chef to walk out.

The crew is running in circles trying to please Athena, the primary on this charter. The food is taking too long, the guests are too hungry, and Athena takes it upon herself to head down to the galley. Katie is perplexed about how they can be told they are running behind by Athena when the guests were the ones late to the table.

Chef Mathew is cooking his heart out as it is his last charter. Since walking off the boat and then coming back (begging for forgiveness), Captain Sandy is allowing Mathew a swan song before being replaced with a new (more reliable) chef.

That doesn’t stop Mathew from complaining, and when he gets thrown a salad curveball by Athena, Mathew’s head is basically going to explode. In the meantime, Courtney is displeased that Satan, I mean Lexi, is not in the cabins based on her behavior. In fact, Lexi could have been fired for cursing at her crew and being inappropriate, but now she is on service? Hm…

The wind is picking up, and it is symbolic of the stress Mathew is feeling when Athena and the guests request to see the chef. Mathew is shaking like a leaf, yet Athena commends Mathew for “handling the pressure well.” He sure passed that test.

Katie understands that although Lexi causes drama, the guests enjoy her and she seems to be performing well. It’s a late, late night and Lexi climbs into bed after the guests enjoy one too many shots but praise her for being the best stew around.

The next morning, Malia is hopeful that David understood her lack of a response as a no and keeps her fingers crossed that he won’t cross that line and share his feelings for her again. It is certainly making for an awkward work environment with the deck crew.

Athena is back in the galley, touching base on the TWO cakes she has requested for the evening’s dessert. Courtney gets roped in to help Mathew with the cake design. She SHOULD have told Mathew to have a cake delivered along with those balloons, but alas, Courtney is stuck ruining the cake with her lousy capital letters. Also, when are people going to realize that most chefs are not necessarily bakers? Big difference.

Due to the weather, Captain Sandy lets the guests know they are hauling anchor and heading back to the dock. Athena cannot be happy about this, and she is certainly not going to be happy when she sees those cakes!

In the meantime, Katie and Lexi attempt to bond over past charter experiences, particularly ones that involve celebs — Katie worked for LEONARDO DI CAPRIO! It is evident that the girls are simply trying to coexist after the shakeup they had a few days ago.

When Athena comes in for a sneak peek of the cakes, her face says it all. She is incredibly disappointed. Couldn’t Chef Mathew steal a moment from being soooo busy and at least add some HEIGHT to those pancakes he is trying to pass off as cakes?! It’s never a good thing when the primary is annoyed before she even sits down at the table. Mathew really must turn it up because Athena’s happiness is imperative. Somehow, the guests were happy with Mat’s last meal, including the cakes. Guess that’s the plus side of filling guests up with liquor — ha!

The morning marks the end of the charter and Mathew’s last day. It’s a shame to see Mathew go, since he is quite a good chef, but as Sandy puts it, “Mathew’s problem is Mathew.” That guy is way too into his head, and because of his unreliable behavior, he is going to be saying farewell to more than just the guests this morning.

Athena thanks the crew for her charter, but not before she forgets Courtney’s name… ouch. Before the tip meeting, Mathew gets called to the bridge by Captain Sandy. The captain explains how the clients and the crew love Mathew, and she states that she is “gonna trust” him to finish out the season with her on the yacht. Translation: Mathew stays. Mathew is beyond thrilled to be given a second chance.

Not really sure why Mathew and Lexi are still onboard AND getting congratulated. During the tip meeting, Captain Sandy loves how the crew managed to reset after the Lexi fight. You can see Courtney scoffing at Captain Sandy’s compliments to Lexi, and it is evident Courtney is frustrated that bad behavior keeps getting rewarded.

The tip was a tad low… especially considering how much these people spend on drinks on their night off. Luckily, Mathew buys the crew’s forgiveness by paying the entire bill during crew dinner. Everyone seems to be having a nice time eating and drinking. Alter egos get discussed and past jobs become a hot topic. Mzi explains how hard it was trying to get a job in yachting. He states it is very male and white but shares that he has seen progress over the last few years. Malia reminds him that, “On deck, you’re just green,” which causes everyone to chuckle.

The drunk crew comes home to the hot tub. It seems like everyone is getting along just fine this time around, even Lexi as she drinks her water and eats her banana. So random. Also. It’s not the crew’s responsibility for how you behave when you take the shots, Lexi… just be nice. It’s simple.

How cute are Courtney and Mzi? They are dancing the night away and smooching a little bit here and there (just hope she isn’t leading him on). Mathew excuses himself before the night gets too messy, and boy does it take a turn when David readdresses *the* question to Malia.  He is not picking up Malia’s cues and presses on, telling Malia that he is “fully into her.” Cringe. David tells Malia, “You’re the equivalent of my mum to me,” and luckily, Malia lets him down gently and lets him know that she would prefer being single.

Katie and Lloyd sit on the sidelines, taking it all in, including the bump and grind performance given by Courtney and Mzi. When Courtney and Mzi sneak out, Lloyd becomes emotional discussing his last job where the boss was absolutely cruel to him. Malia uses this moment as an opportunity to get away from David, and they all embrace Lloyd as he tearfully explains, “It’s the first-time people wanna listen and understand” about his sexuality.

While Lloyd is breaking down and sharing things he never really talked about with others, Courtney and Mzi drunkenly bop around the boat, and Lexi searches for healthy snacks, thus proving she is still the super caring individual we all know and love (not).

Malia offers to Lloyd, “I swung both ways. I still do,” and Lloyd equates himself to a scale. He didn’t talk about this sooner because someone’s sexuality should not define them, and it especially should not define their work ethic. Looking forward to seeing Lloyd be Lloyd from here on out. In the words of Lloyd, “Sexuality… why does anyone even care?”