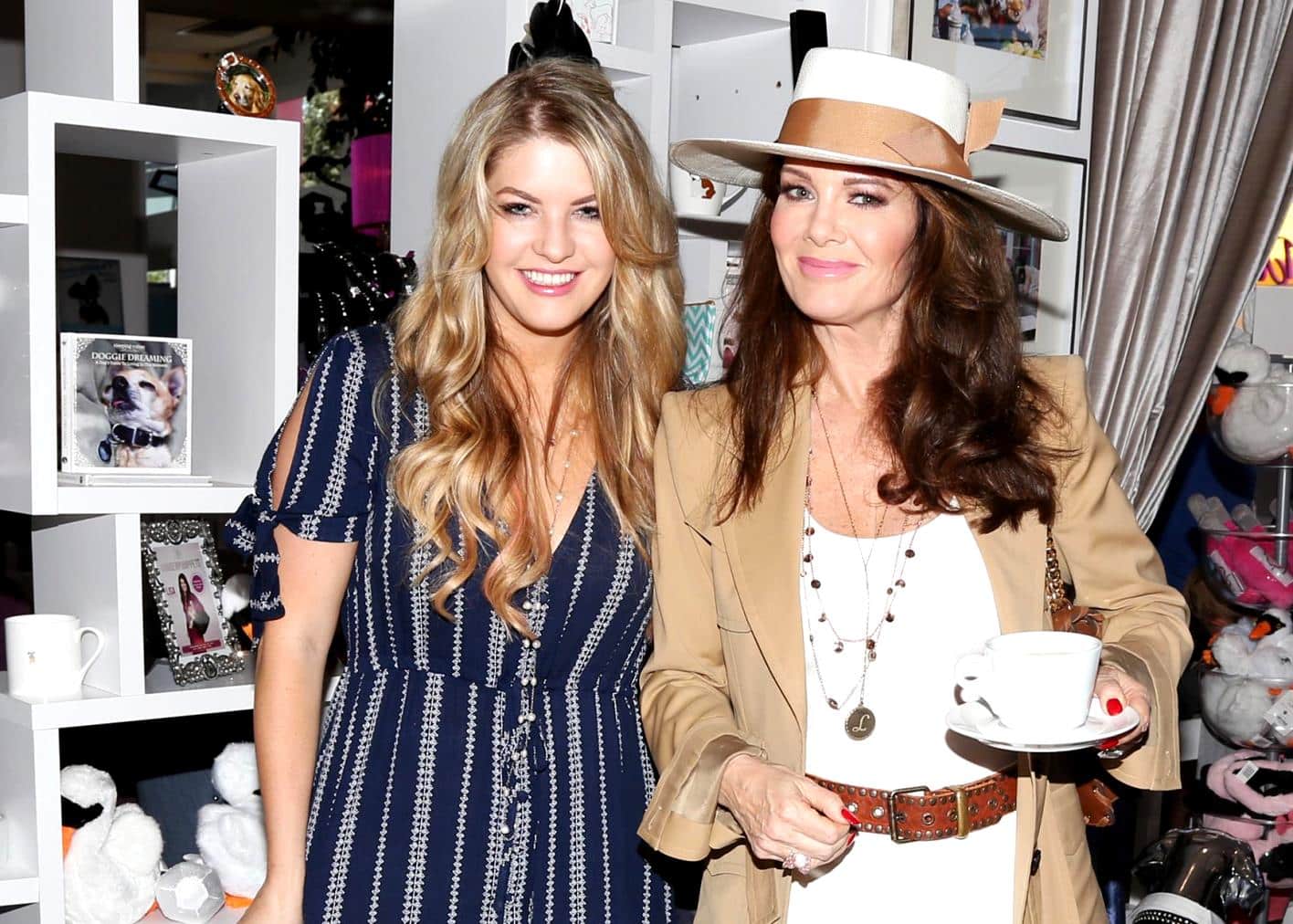 Lisa Vanderpump is fighting back on Twitter after a slew of accusations about her children, Pandora Sabo and Max Todd, and her restaurants.

Following the sharing of Pandora’s baby news, the former Real Housewives of Beverly Hills cast member denied selling the story to Daily Mail before fighting back against claims of being a fascist and addressing allegations of favoring Pandora, 35, over Max, 29.

“Wonderful, you sold your daughter’s pregnancy story to the press for some money. Restaurants must be doing really bad. Anyway, did you apologise to [Kyle Richards] yet for all the distress you caused her and her family?” a fan asked on August 7.

“Of course we didn’t sell the story lol…it was at our charity event,” Lisa, 60, replied. “She is six months…nasty much?” 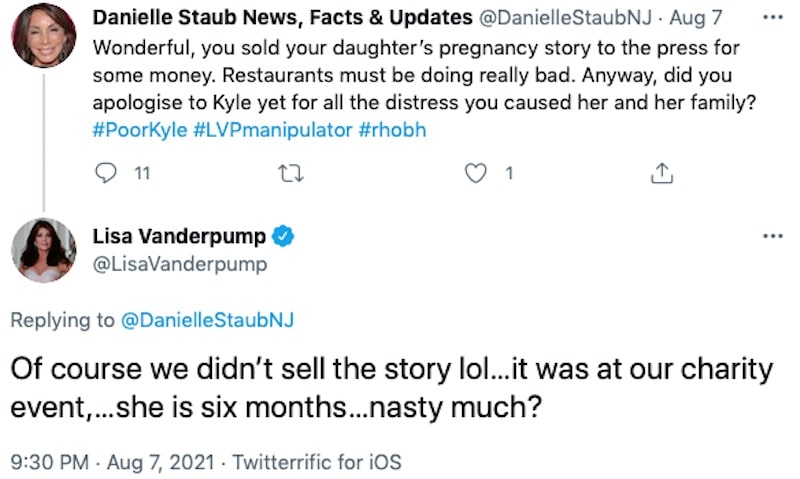 Another Twitter user accused Lisa of being a fascist over her recently implemented COVID-19 mandates at her Los Angeles restaurants.

“[Lisa Vanderpump] is a fascist! She’s requiring vaccine passports to dine in her restaurants! Don’t give her one red cent, ever! Vaxed or unvaxed, this is America and we have to speak with our $$$$! Maybe she should take her un-American a– back to her homeland…”

In response, Lisa pointed out that she also allows those with a negative COVID-19 to enter her venues.

“Sweetie, read it properly, a negative test is fine ….now shut up,” she advised. 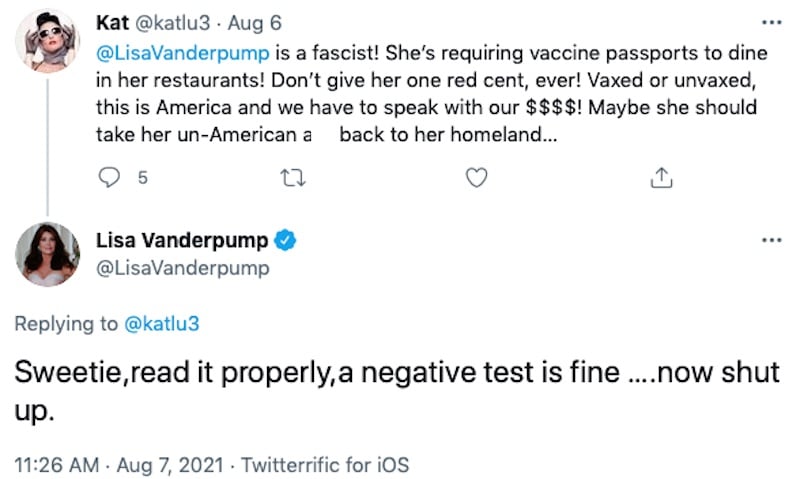 In another series of tweets, Lisa was met with criticism over her treatment of Max.

“I’ll never forget when I saw [Lisa Vanderpump] let her son Max live without POWER for months and said it was good for him. What the actual f-ck,” a man wrote on August 5, responding to a report about Dr. Dre’s 38-year-old daughter living out of her car.

“It was a couple of weeks, but yes it was good for him, He needed to work more,” Lisa explained.

But the conversation didn’t end there.

“And you’re entitled to that opinion. I think it’s extremely wrong, damaging, and hurtful. But you can think you’re an awesome mom. You clearly treat your daughter one way and max another. Your tough love doesn’t always work,” the man wrote back.

Lisa then noted that she doesn’t need “parenting advice” from her social media hater.

“[Tough love] often works, she didn’t need a kick in the a– he did, and now he’s doing brilliantly,” Lisa shared. “Have a blessed day.” 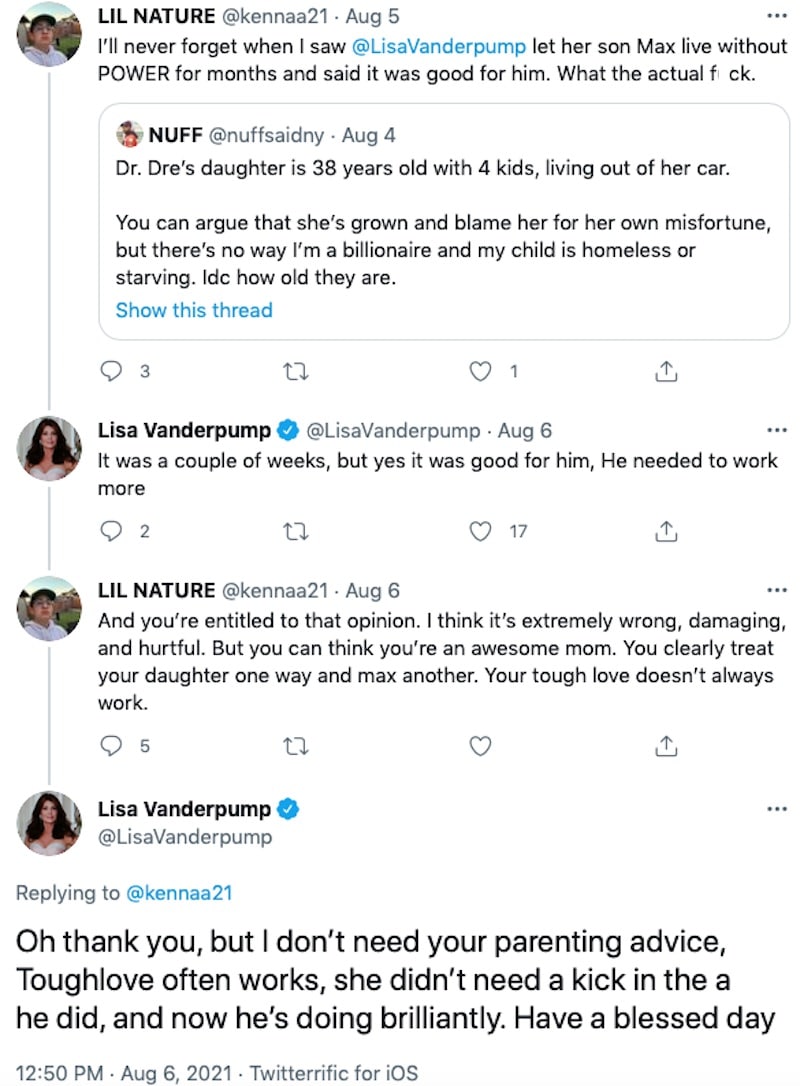 In another tweet, after the same man suggested encouragement through fear “doesn’t work” and can lead to relationships that are “abusive,” Lisa insisted that her two kids are treated the same.

“I treat them the same,” she insisted. “I bought [Max] a condo with a nice mortgage so he can pay, Hey get off my timeline.” 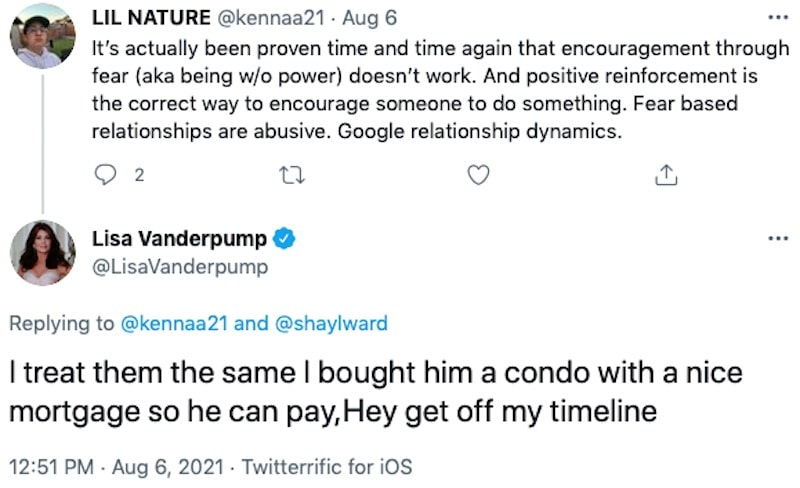 The Real Housewives of Beverly Hills season 11 airs Wednesdays at 8/7c on Bravo, and Vanderpump Rules returns this fall for season nine.