Below Deck Med Recap: Lexi Pushes Katie to Her Breaking Point, Is a Replacement in the Future? 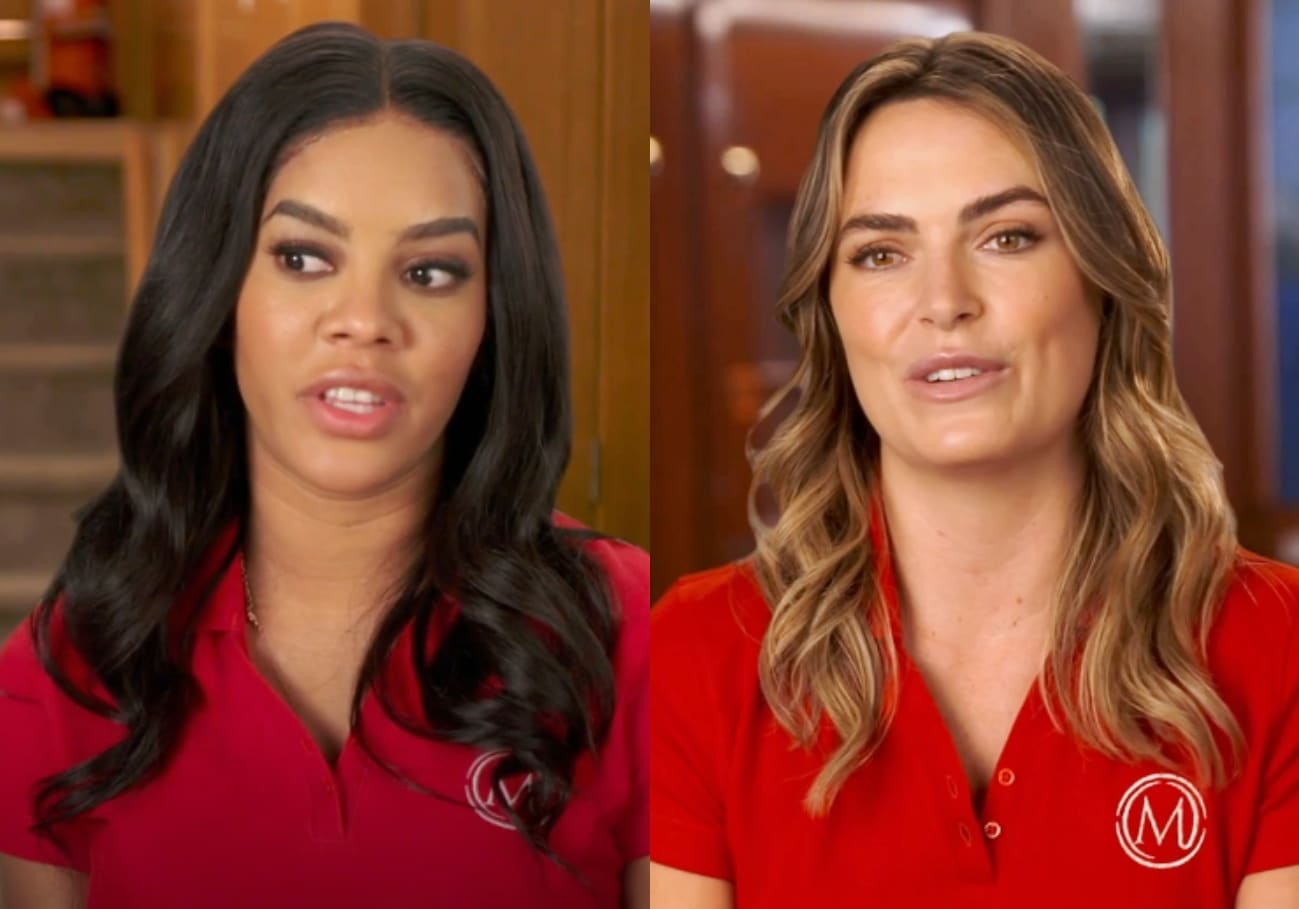 On this episode of Below Deck Mediterranean, Lexi bristles at being a team player and Katie struggles to get the support she needs from Captain Sandy.

With 11 hours left before the charter, the crew is late-night binge eating while Courtney and Mzi are still flirting like crazy, mainly because they are the only two that are on the same drunk level. Courtney winds up passing out in Malia‘s bunk, and the next morning, they all feel like “Big Foot’s d*ck.” Unfortunately, Courtney barfed in Malia’s bed (woof), but luckily for Courtney, it doesn’t look like she’s on “launge” (laundry). Sorry, Lexi!

Although Lloyd feels a bit like a fool after he shared his sexuality with some of the crew, he knows that he can trust them all and truly be himself. It’s refreshing to see the crew feel so comfortable together.  Even “Chloe and Mav” (Courtney and Mzi’s alter egos) can hide away without shame until the next drunken evening.

Luckily, no one quit drunkenly, so it’s back to business as usual for the crew. It’s almost time for charter number four, and the preference meeting is underway. Jennifer and Patrick are repeat charter guests who LOVE to party — I mean, who wants a yacht transformed into an Oktoberfest celebration?!

The interior prepares for the new guests, and Katie allows Courtney to be on service since the upcoming guests will most likely be drunk at all times — well, that and because Katie firmly believes that stews should rotate positions while on board. Of course, Lexi is ticked off and likens herself to the Cinderella of the charter. Puh-lease.

David is reminded about drunkenly professing his love for Malia the night before and they all get a good laugh about it before the provisions arrive. Everyone gets into their whites, and it is a perfect day to start a charter with a group of people who are wearing T-shirts that say “alcohol, now.” Great. One of the guests is even walking around with a blow-up tube named Chad around her neck. That’ll do it for me.

Malia does a good job of getting the boat out of the slip — clearly, she is Captain Sandy’s favorite, I mean, protégé. And a salty Lexi does a great job of reminding the guests that she is the second stew as if they are going to treat her better because of that title. For a girl who talks about being “very big” on respect, she doesn’t seem to give any. Too bad she is dropping the ball — Lexi has left the guests’ glasses empty and they are less than thrilled.

Courtney is doing a solid job during lunch service and this spread is easy to sell. I do feel like the guests should take a few to digest before sliding into the water sports. Also, is there a maritime law about drunk driving jet skis? The amount that these guests have been drinking is outrageous. It’s no wonder they chose to ignore Malia’s instruction to stay away from the shore.

Before they know it, a police vessel approaches while the fire alarm onboard is simultaneously going off thanks to Lexi and her ironing skills. Take about a cluster f*ck. Watch the steam, Lexi… The police remind the guests that they must be 300 meters from the shoreline, and luckily, the guests all get back on board where they can be contained.

Meanwhile, Lexi is huffing and puffing that she is actually doing work down in the laundry room, since she is, after all, the second stew… in case anyone forgot. Lexi’s silence is a bit frightening, but Katie holds to her rule that she will continue to rotate the stews even if it means making someone angry.

Can we discuss how cute Mzi and Courtney are in that side by side where they are essentially saying the same thing in their confessional? Fall in love already, will ya?

The charter guests seem quite happy with the food and the evening in general, but problems are brewing behind the scenes. Lexi is doing the old “I am going to pretend to be bad at something so Katie never asks me to do it again” routine. However, this mindset hurts Katie big time. She is stuck picking up Lexi’s slack, and she feels as though she is failing at her job, particularly when the guests point out issues. Katie is certainly not failing. It is Lexi’s silent tantrum and the fact that she is not doing her job properly. The unfortunate part is that it all falls on Katie, thus making it a bad reflection on her.

In preparation for the Oktoberfest celebration, Chef Mathew pow wows with the primary while the deck crew talks about drinking games the guests can play. It seems as though the next day will be one for the books.

Lexi claims she is afraid of doing breakfast with Mathew the next morning, but I am certain she would complain about anything she did not want to be doing. If only everyone could be as calm and sweet as Lloyd. Look at him growing and learning as he gets behind the wheel of the yacht! #MoreLloyd.

Katie is beginning to get more and more frustrated with Lexi as Lexi continuously forgets to do simple things, like putting plates on the breakfast table. Katie is struggling because Lexi didn’t set her up. Lexi was the first stew awake, meaning she should have everything set and ready to go. Think of it like a relay race, except Lexi is not pulling her weight. In the words of Mathew, “It’s f*cking annoying.” Lexi needs to understand that she simply cannot continue doing the bare minimum.

In the meantime, Captain Sandy begins micromanaging. She simply cannot sit back and be happy, so it appears as though instead of being miserable about tablescapes, Sandy is focusing on the slide. She is displeased that the slide is not pumped up to the fullest, and Malia is not into the drama this slide is bringing. Captain Sandy tells Malia, “Calm down. I’m not challenging you.” Malia then blames her flip out on being hungry. Good excuse, Malia.

Lexi, here’s an idea. Save your excuses. The girl was too busy taking pictures to put plates and cutlery down for the guests’ breakfast. Kudos to production for throwing Lexi riiiiight under the bus with that footage. Katie continues to bite her tongue as she picks up Lexi’s carelessness.

The Beer Olympics for the guests are underway, and there is something called a cham-bong? This setup looks like an accident waiting to happen, especially with those boozy guests.

Lexi’s sloppy behavior is taking a toll on Katie, and Captain Sandy warns Katie not to give up on Lexi. The issue is a second stew should not be failing at simple tasks. Poor Katie keeps getting the brunt of everything. Captain Sandy encouraging the team to step up is not appropriate for the current situation. This is NOT on Katie and her leadership skills as Captain Sandy insinuates. Lexi clearly was not inspired after Captain Sandy spoke to her rather than firing her. Slacking off is unacceptable. Later, when a text pops up on Captain Sandy’s phone that reads, “Your deck/crew has cleared quarantine,” the only question to ask is, is Lexi getting replaced??