Home Below Deck Mediterranean Below Deck Med Recap: Katie Struggles to Keep Interior Afloat as Guest Complains About “Lack of Attention,” Will Lexi Be Replaced?

Below Deck Med Recap: Katie Struggles to Keep Interior Afloat as Guest Complains About “Lack of Attention,” Will Lexi Be Replaced? 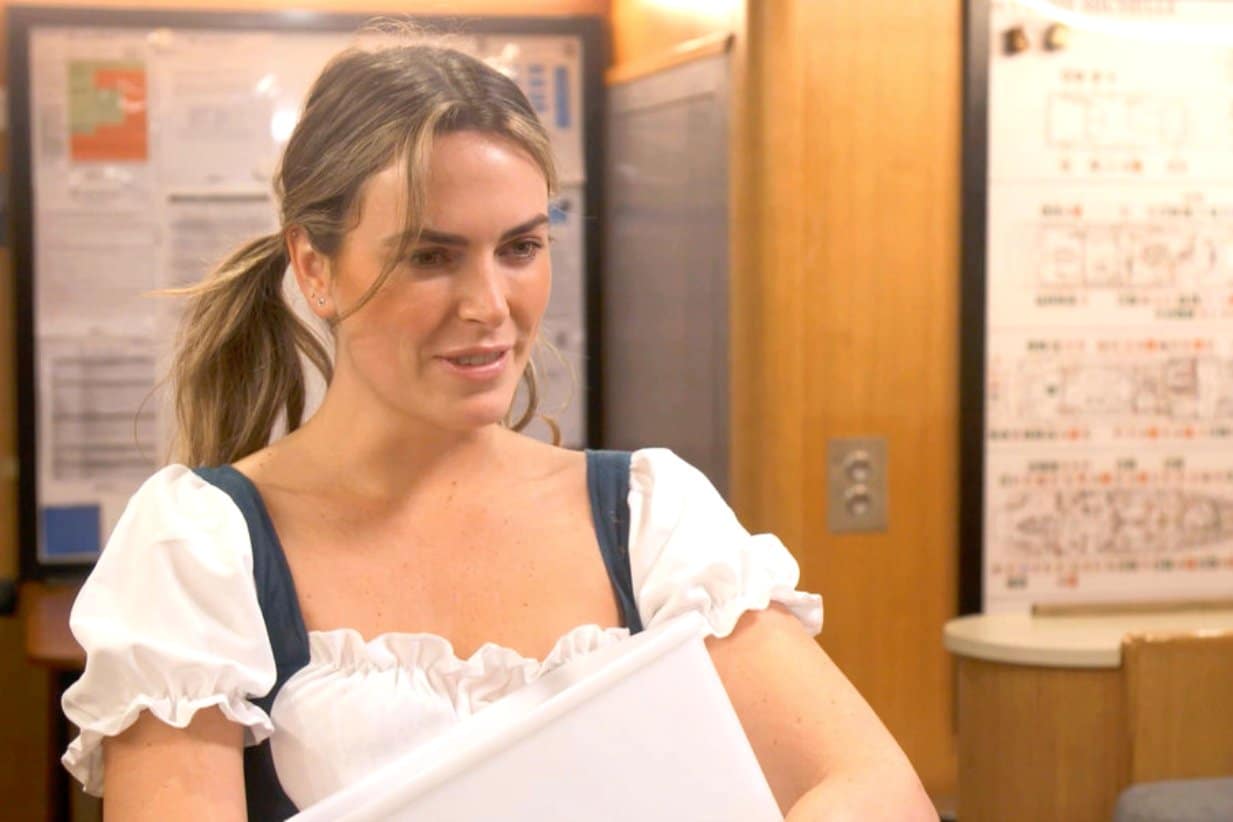 Despite Captain Sandy’s “pep talk” to Katie about leadership, things are not going well for the interior on this episode of Below Deck Mediterranean. Will a new stew help the situation or will the addition add more tension on the boat?

Katie is being pulled in every direction, and it is certainly not helping that Lexi is slacking BIG TIME. Must be Katie’s lack of leadership — LOL. Captain Sandy’s advice to try hard to coexist with Lexi is driving Katie nuts, so much so that Katie nearly forgot her own mother’s birthday! See what happens when minutia consumes you?

There’s hardly any time for Katie to catch her breath from cleaning up Lexi’s mistakes because it is almost time for the Oktoberfest celebration on board. As they attempt to prepare for the evening, Katie is stuck serving the boozehound guests and Lexi still has not removed the cleaning supplies from the guests’ quarters. When Lexi FINALLY makes her way to finish cleaning the bedrooms, she unknowingly barges in on a guest, and well, they can all just kiss their tip goodbye, I guess. Instead of being sorry, Lexi whispers under her breath, “She has a nice a*s.”

Chef Mathew seems to have his head on straight (finally) and is killing it this charter. Believe it or not, Mathew dropped out of school when he was 16, but man did he really make the world his classroom. He studied all over the globe from the best chefs and it has clearly paid off.

Katie is getting worked to the bone and even the guests are noticing that she never seems to be on break. The problem is, there just isn’t any time. The boat needs to be decorated and the food must be made. The crew changes into their Oktoberfest costumes, and while the girls look adorable, the dudes just look like Peter Pan wannabes. When Captain Sandy stops by to chat with Katie, Katie shares things are not going well with Lexi. Captain Sandy offers some help to Katie… since she has a stew in quarantine and there’s an extra boat on board. Is it better to know the devil you know or the devil you don’t? Might be tricky adding a newbie, so Katie decides to think about it before agreeing. Katie seems to be more concerned about what Lexi would think about adding a stew to the mix. That says a lot about the dynamic on this boat, huh?

Lloyd emerges donning his beer costume and all of the guests get amped. Everyone is having a GREAT time — well everyone but Lexi, who is stuck in the cabins. Katie decides that Lexi should experience the fun at the Oktoberfest party, and when Courtney tries to get Lexi up to the deck for a bit, Lexi declines seeing the light of day. She would much rather complain, be miserable, and not have to clean up the aftereffects of the celebration. #calculated.

When Katie finds out that Lexi denied the opportunity to come, she decides to have a chat with her. Katie explains to Lexi that a new stew is waiting in the wings — not to be a replacement (although she SHOULD replace Lexi) but as additional help to the interior. Lexi feels like it may be a good thing to add this new girl to the crew since they can make her the “Cinderella.” How twisted is Lexi? Happy to get someone new so that she will never have to go back to laundry and bathrooms again.

Courtney feels like the new girl would be helpful but believes that Lexi should be replaced. After all, the only reason they NEED some help is because Lexi is not doing her job! Plus, let’s be real — a fourth stew will def cut into their tips! And on top of that, what’s gonna be the sleeping arrangements? The empty bed is in the boys’ room…

In the meantime, Chef Mathew is absolutely killing it. The Oktoberfest food plus the snazzy dinner really blew the guests away! As night turns into day, the crew prepares for the final morning of the charter. The current is kicking up big time and all hands need to be on deck to make sure the yacht safely arrives in the port. After much ado, the boat gets docked, but the guests are left finding their own way because… LEXI LEFT THEM UNATTENDED AGAIN. Lexi continues to make it look like the stews are failing at their job and Katie is furious. When the guests are stuck making their own drinks because Lexi is downstairs in laundry not serving them, Katie walks in and is livid. Why is Lexi on breakfast when she is so unreliable?!

The crew gets into their whites and bids farewell to the guests. They hold their breath when the primaries state “BUT” and begin to rattle off how there was a “lack of attention” to them on board. Katie knows they aren’t wrong, but Katie also knows that is 100% Lexi’s fault. Unfortunately, the disgruntled guest’s review falls on Katie-the-head-stew’s shoulders. Remind me again why Lexi is not getting removed?? Luckily, Chef Mathew and the deck crew saved this charter.

Before the tip meeting, Katie finds Captain Sandy and lets her know that she will reluctantly take on the fourth stew. How come Captain Sandy won’t listen to Katie when she asks to get rid of Lexi but pretends to listen when she allows Katie to make the choice about the new addition?  Leadership is questionable here.

Everyone is irked that Lexi continues to get away with her mess-ups, but despite the “constructive criticism,” they managed to get the best tip of the season so far. It is decided that Mat will be bunking with the new girl and things start to look like they are going to get a little better.

Before they know it, it’s time to meet for charter five’s preference sheet. It’s an all-lady charter, and they are full of dietary restrictive queens! Mathew is afraid that they may be a bit high maintenance because it’s all women (umm excuse me), and it’s only a matter of time before he quits or throws a temper tantrum over it.

Later, the crew relaxes a bit since it is their night off.  Shots are had and Lloyd suggests that Lexi be a little “Less sass queen, more yas queen.” I could not agree more.  I also wanna join Courtney and Malia for their wine and yoga session. That’s a combo I can stand behind. The two ladies discuss the impending fourth stew and Courtney fears the newbie may think she is coming in as second stew. That would sure lead to some drama!

The boys spend downtime in the hot tub, and they are enjoying themselves until Lexi makes her way over. Lloyd is experiencing PTSD when he sees her saunter up and worries that she may explode at any minute. I mean, the fact that she was not fired for what she initially did to Lloyd in the hot tub is insane! When Lexi hops in the hot tub, the guys share that they were talking about “Harry Potter.” Lexi explains she has never seen it because she was raised very religiously and the witchcraft was not accepted. It is quite pleasant banter and David admits that *this* Lexi is cool and sees that she is just a hurt girl. He understands what deep hurt is since he lost two of his friends in a car accident and lives with a lot of survivor’s guilt.

The next morning, Mzi is facing his fear of heights by cleaning the windows in a harness. It’s nice to see them all be a team on deck crew… if only the interior got their act together. Katie sits Lexi down and lets her know that her behavior seems a bit like laziness. Katie does not want to have ranks anymore and she is hoping that things are going to go smoothly. The new girl is boarding the yacht, and according to the coming attractions, things are really going to get shaken up!