RHOBH’s Lisa Rinna Claps Back at Criticism For Defending Erika Jayne Amid Legal Drama, Suggests She’s “Being Tested” After Attorney Shared Plans to Subpoena Her 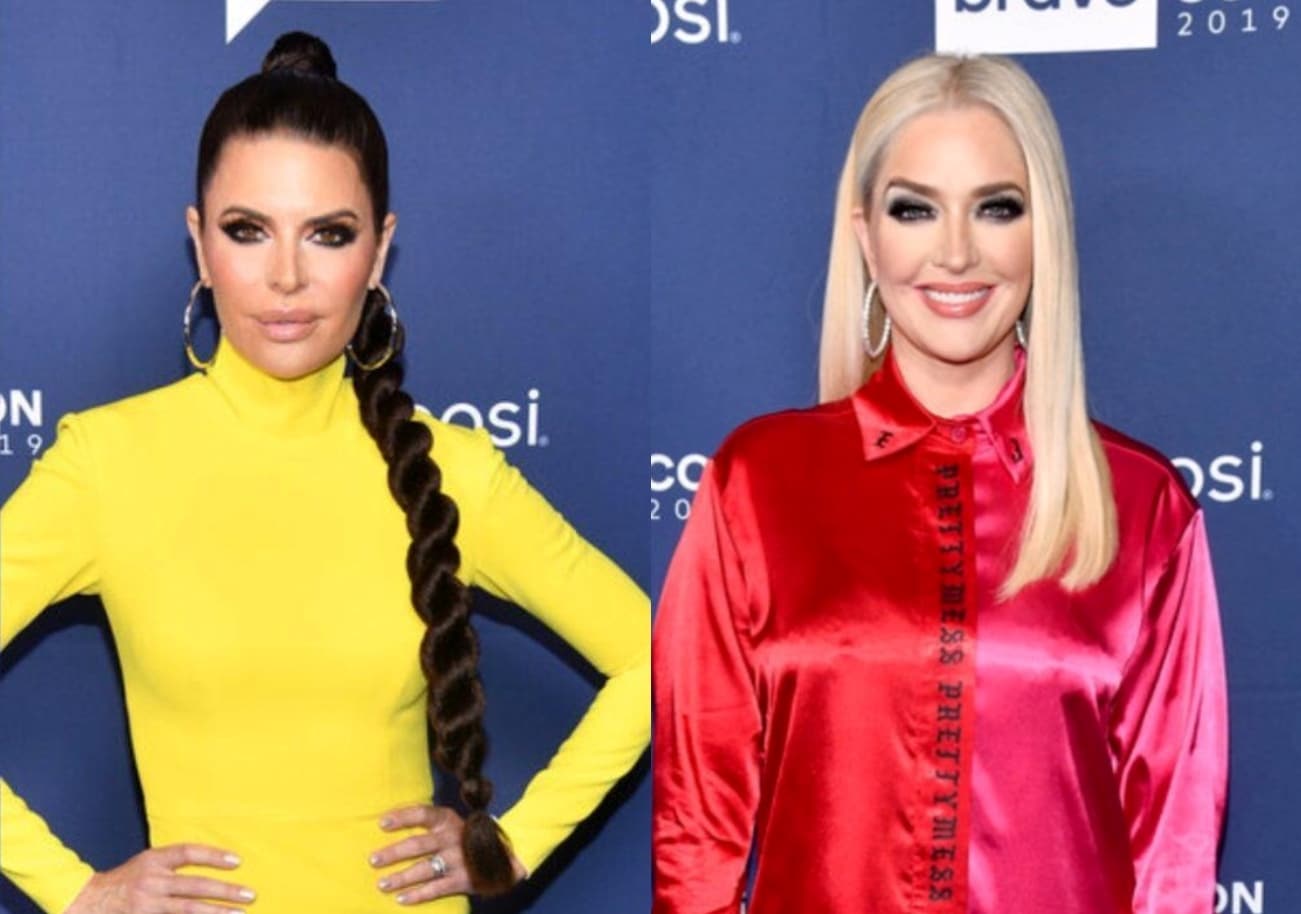 Lisa Rinna is responding to the backlash she’s received over her defense of her Real Housewives of Beverly Hills co-star, Erika Jayne.

Lisa has been one of Erika’s biggest cheerleaders amid her impending divorce and ongoing legal mess. As fans well know, her estranged husband, Thomas Girardi, has been accused of embezzling millions of dollars from his former clients, and many believe the “Pretty Mess” singer was complicit.

Though Erika has denied any wrongdoing on the show, many of her co-stars are beginning to question her story while Lisa continues to defend her friend. In fact, after one disturbed fan suggested that Erika should be “executed,” Lisa begged her followers to stop sending the cast threats before claiming she feels horrible for the vulnerable victims Thomas allegedly ripped off.

“But please don’t threaten to kill us or our families,” she begged earlier this week on Instagram. “We are here doing the best we can with a real life situation that is playing out in real time. We are devastated for the victims orphans and widows.

Following her post, attorney Ronald Richards, who was hired to investigate Erika in Thomas’ bankruptcy case, took aim at Lisa on Twitter. “Pretending you care [Lisa Rinna] while your referring [Erika Jayne] to your biz manager to make a successor company and publicly claiming she lacks any legal culpability while doing absolutely nothing for the victims falls on deaf ears and rings hallow,” he wrote. “This is not TV, your words do matter.”

As a result, Lisa took to her Instagram Story on Monday to clap back at those calling her out for sticking by Erika as she first reshared a clip of herself discussing her co-star’s situation.

“If I thought Erika was full of sh*t I’d say the same thing to her. I don’t know what is going on there,” she exclaimed in the clip while discussing whether she knows if Erika was complicit in Thomas’ alleged misdeeds. “I need to find out. I need to let it play out and see what’s gonna happen.” 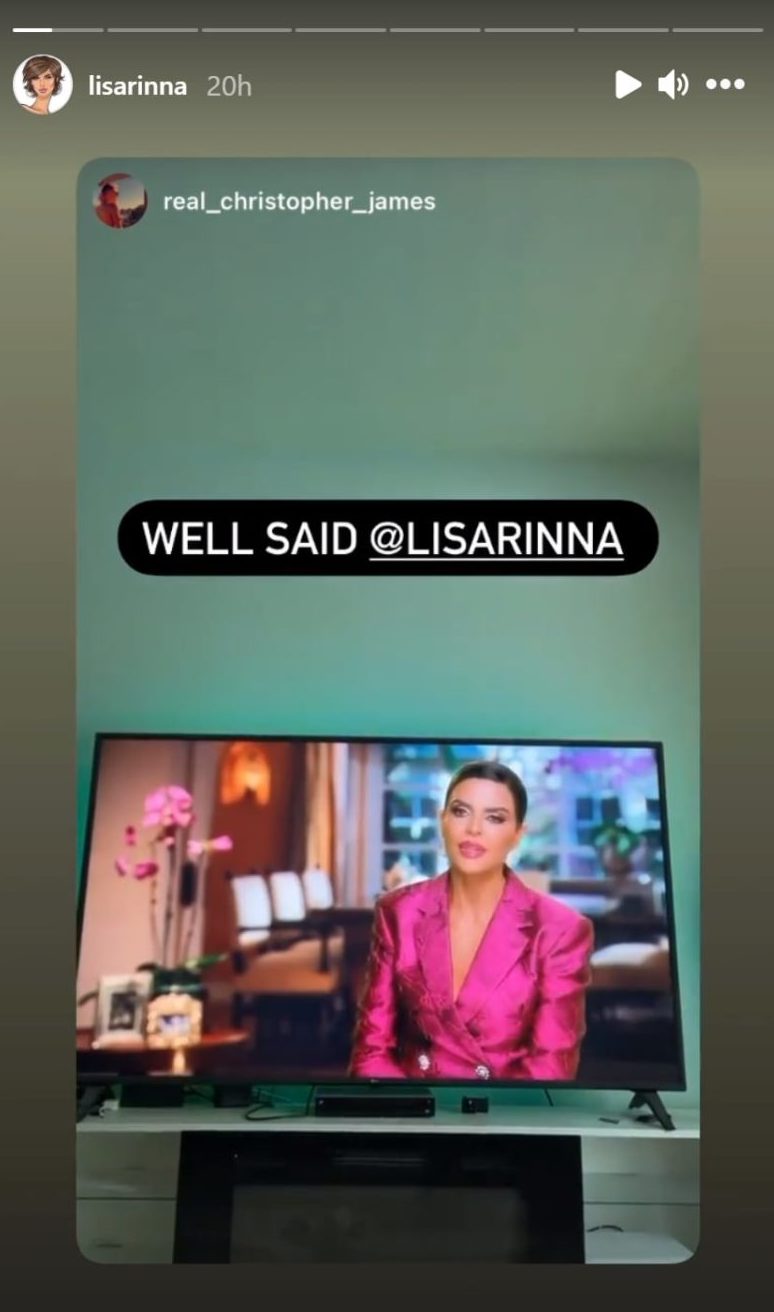 Then, she made it clear that she’s not concerned with what any of her haters think.

“Rule number [one]: F*ck what they think,” she wrote in another August 23 post. 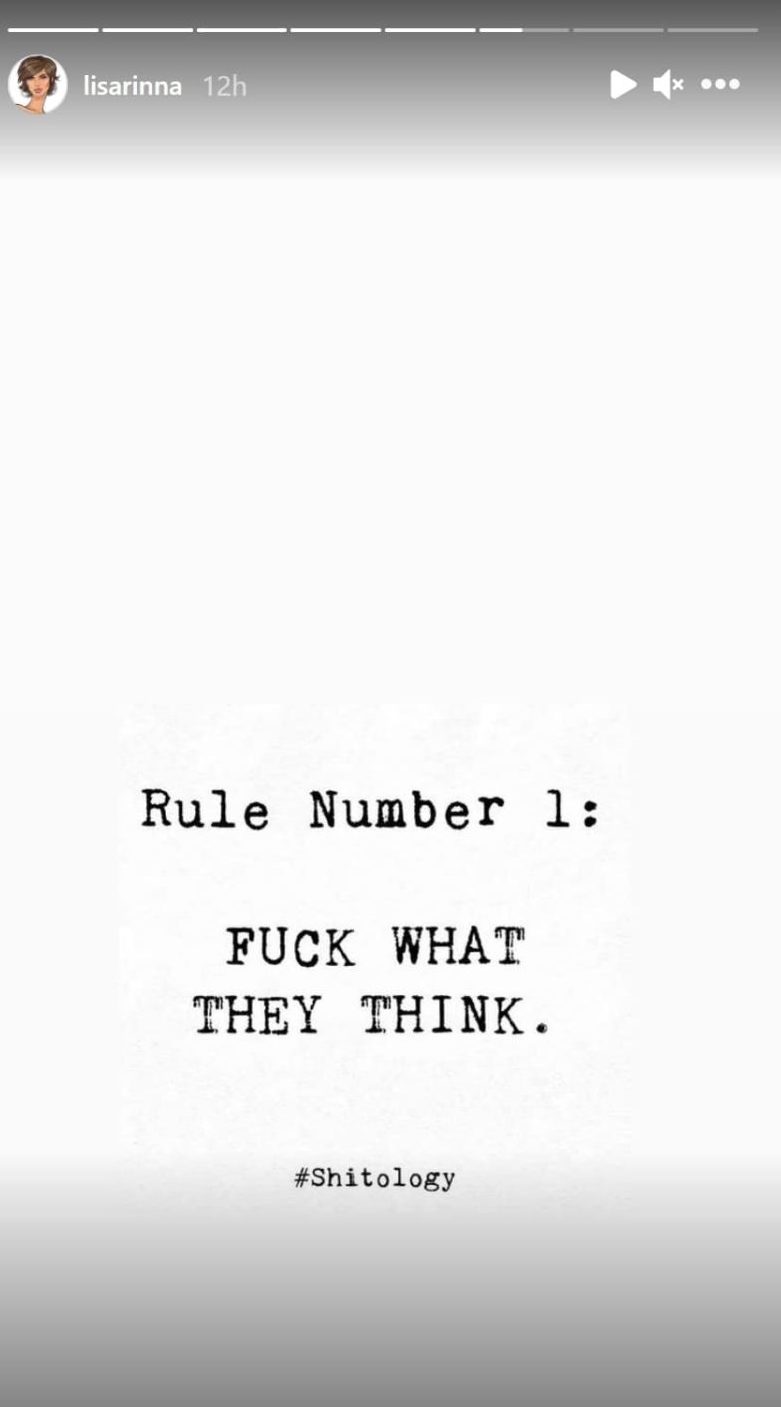 However, the actress was not finished just yet as she also slammed those who are hoping to see her “crash and burn.”

“The velocity that you [m*therf*ckers] want to take me down and see me crash and burn is palpable. I see you,” she snarked. 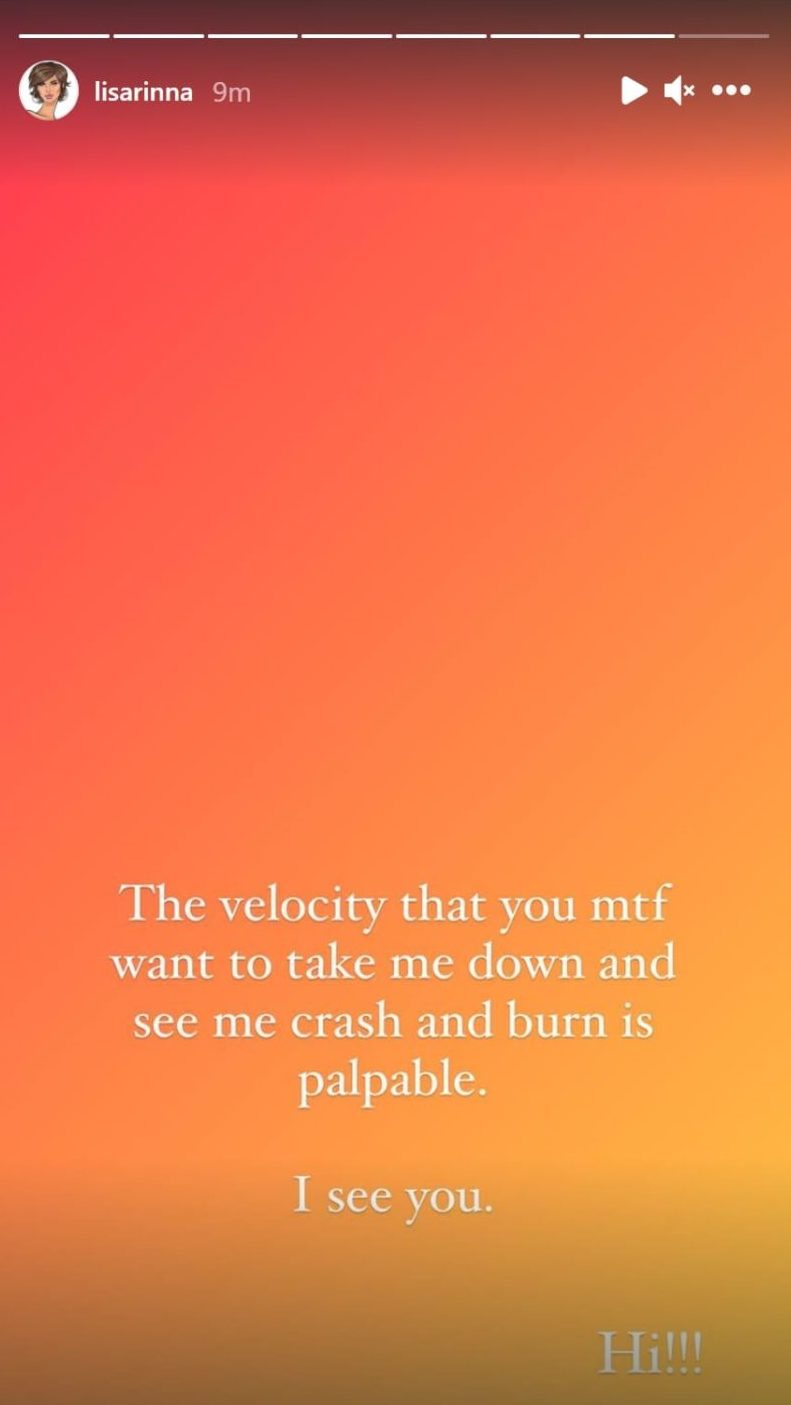 Lisa then posted about being “tested” and seemingly gave herself a little pep talk about staying strong.

“You get tested the most when it’s time for you to elevate. Don’t break,” she wrote. 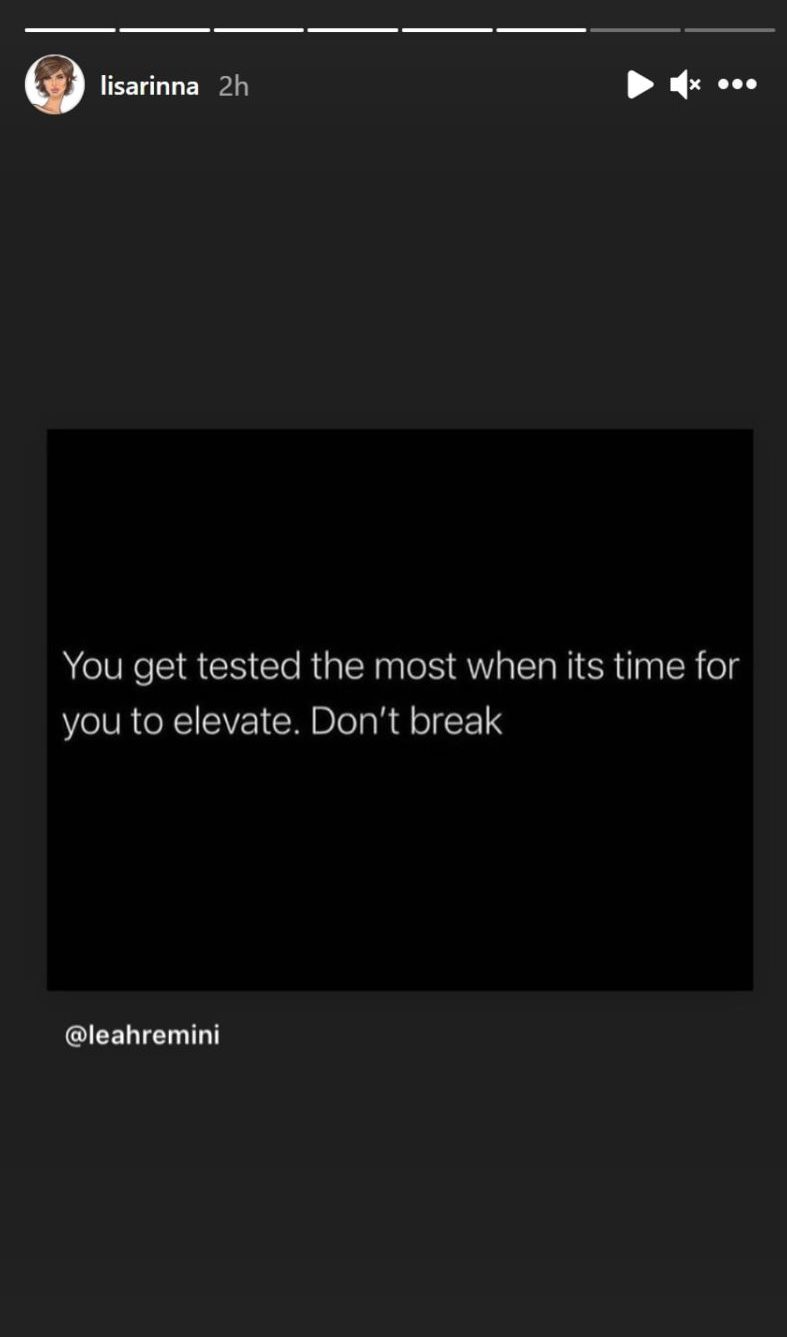 This comes after Ronald Richards recently shared that he’s planning to depose Lisa due to her “extreme” defense of Erika.

“Lisa Rinna has gone beyond just saying, ‘Hey, I’m giving her the benefit of the doubt or innocent until proven guilty.’ She’s gone to the further extreme and said, ‘She didn’t do anything. She’s basically innocent,’” he told Adam Newell on YouTube. “Well, is that just a lie or are you sort of grandstanding, or do you have facts?”

He added, “When I serve her a [deposition] subpoena, she may have a lawyer write me [and claim], ‘She knows nothing. She was just talking for TV.’ And I’m gonna have her sign a declaration under penalty of perjury that she was just basically talking, and she has no personal knowledge, and that would be acceptable to me.”