RHONY Recap: Sonja is Overheard Trash Talking Luann and Ramona as She Also Gets COVID, Leah Clashes With Mom Over Plastic Surgery 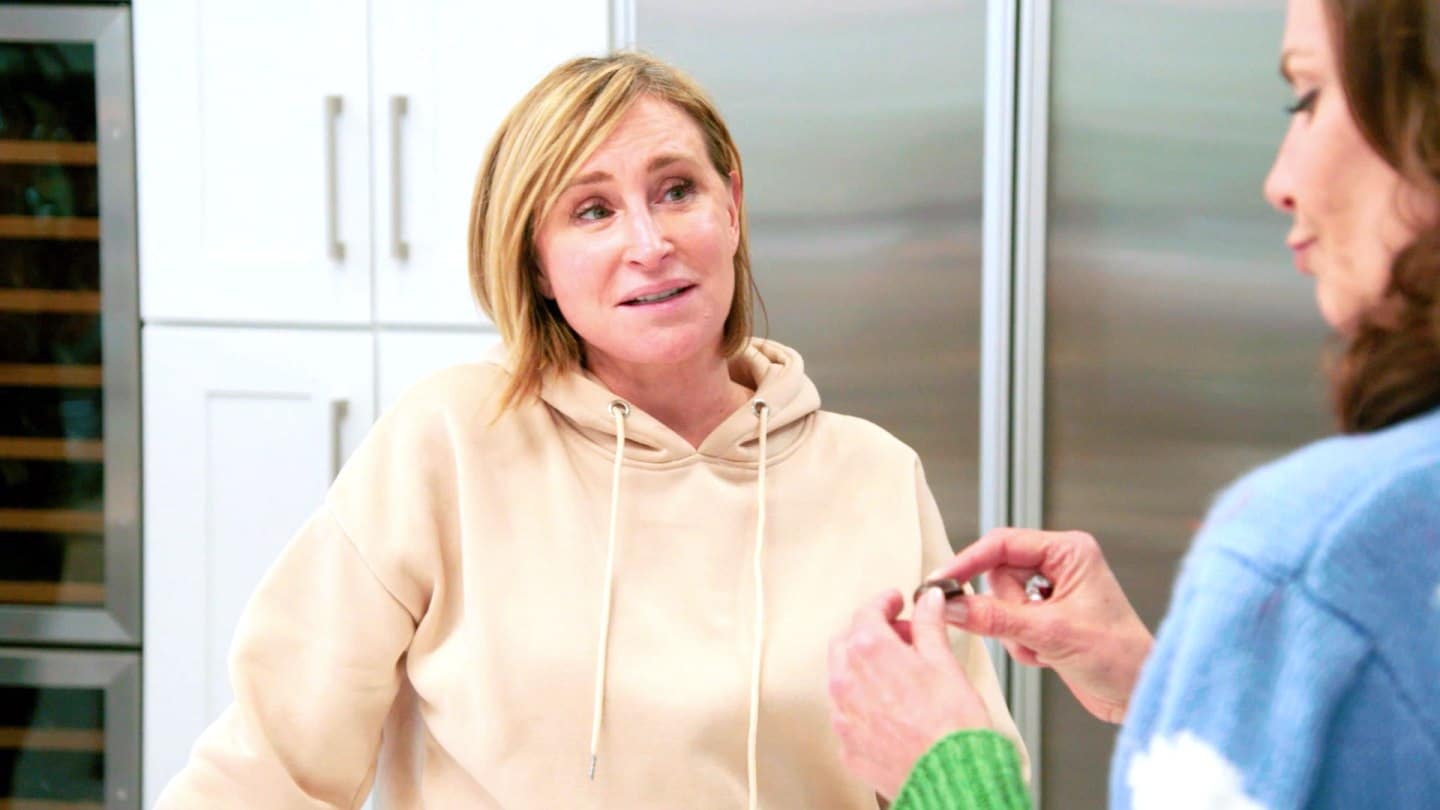 This week, The Real Housewives of New York City is heading to the Hamptons again?!? Let’s watch one more episode before the finale and hope next season Bravo will remove the messy rubble (Leah) of Season 13 and go back to the good old days, shall we?

This episode is a lot of fluff, but we find out at the end we are almost at the finish line of this disastrous season! There are rumors on the horizon about Leah and Sonja being shown the door and Tins and Bethenny returning to NYC. Eboni is being held harmless despite the backlash from the viewers who believe that the show was ruined by Leah and Eboni.

Bravo has done even more damage to this show than they did to RHOC by messing with a formula that was tried and tested. Don’t they know you don’t fix something that isn’t broken? Sorry, I digress, let’s move on!

Ramona calls her stomach tiramisu, and she must resort to working off those pounds we all put on during the pandemic. Across town in the moldiest townhome in NYC, Sonja is wearing a white coat with no pants and wading in the fish pond. She has her faithful assistant/snatchguard Emma helping, but at what expense to her psyche? Can that poor young woman unsee the horrors she has seen? Emma will suffer from PTSD for years after living with Sonja and suffering in silence while Sonja was making poop soup and doing their laundry in the bidet.

Leah’s parents, Bunny and Bryan, and her not-so-hot brother, Danny, come over for dinner. Thank God we are not subjected to the Ring girl, Sarah! Leah is having a Kosher dinner for them so she can pretend she is taking this conversion seriously. I will need some help from my readers who are Jewish, but I thought I saw pork ribs on that table? Isn’t that a big no-no?

Leah describes how she is doing her conversion by herself and acknowledges that there are a lot of naysayers. She then decides to share that she got a book deal! Leah is ghostwriting a memoir, which is basically an anti-self-help book. WTF, another Housewife book — as if we didn’t have enough of them already that are collecting dust on the shelves!

Bunny thinks that Leah could have been so much more if she didn’t get into drugs and alcohol. She thinks her life was robbed by her behavior and but in actuality she suffered from her arrested development. Leah is proud of her rave scenes and her presence at the Limelight and the Tunnel.

Leah acts like the only thing she missed was going to Harvard and being a star athlete. She sees herself as Ivy League material. Sure, darling delusional Leah could have been a javelin thrower since she showed her mad skills while throwing those tiki torches at Ramona’s house. I could imagine Leah as a Harvard scholar if she wasn’t like the scarecrow from The Wizard of Oz who wished he had a brain!

Bunny tells Leah she needs constant affirmation about how pretty she looks. Leah feels all Bunny does is criticize her. Bunny thinks that Leah is addicted to plastic surgery and clearly doesn’t approve. She has had a nose job, a boob job, and fat injected into her butt. Leah, in her ITM, thinks that she should blame Bunny for her low self-esteem.

Ramona is practicing the questions on the real estate course. She credits Eboni for encouraging her to take her time studying for the exam. Ramona then gets a call from Sonja and she has some bad news. Sonja shares with Ramona that she did a test for COVID, and she and her intern Emma have tested positive.

Two weeks later, while RHONY was shut down due to the outbreak of COVID among the cast and crew, Eboni shares that one of the three brothers the genetic detective found is her dad. Her dad’s name is Jude, and it was confirmed by DNA. Eboni leaves him a message to call her since he didn’t pick up the phone. She is hopeful that he hears the pureness of her intentions in the voicemail.

Sonja shares how Ramona was concerned about her while she was sick and was going to send her an ambulance due to her running a fever. She received flowers from Ramona, which look a little droopy from all the moisture in the townhome. Leah and Eboni both came over with some supplements to boost her immune system. Ramona decides it is a good idea to take Sonja away to the Hamptons to get a little pampering after being sick.

Luann is packing for the Hamptons, and she is looking forward to getting out of town. Ramona has planned a Galentine’s party since none of them have a beau, but they are all cast on the Real Housewives!

Luann calls Sonja, who tells her that she was dying and so sick she needed an inhaler. She likens herself to Harry Dubin, who must use an inhaler during sex. I sure hope for the sake of the ladies in NYC that Harry is double-bagging that penis since it has been literally in and out of most of our NY ladies.

Luann then overhears Sonja talking smack about her and Ramona when she doesn’t properly disconnect the call. Luann isn’t buying that Sonja doesn’t drink at home. She can hear her having a rambling monologue of nonsensical gibberish peppered with drunk speak.

Eboni and Leah pick up Sonja and we witness Sonja’s long-suffering intern Emma dragging all her suitcases through the snow. Poor Emma even gets blamed since Sonja is late. Leah is already trying to negotiate what rooms she gets. She is using her grandma as her bargaining chip since it will trigger her to sleep in the same room as last time. Leah, our petulant teenager, gets her way since no one wants to poke the bear and have her freak out on them.

Eboni pretends like she is glad that Bershan was invited. She thinks she needs to spend more time with the other ladies so she can get better acquainted.

Ramona is a nervous Nellie with the girls coming over. She has planned a nice dinner for the ladies to celebrate Galentine’s Day. Luann tells Ramona that Sonja was trashing her on the phone. She is annoyed that she has been a good friend to her and even tried to help her rent the townhouse to her dear friends from Abu Dhabi. Luann will never hear from these friends again since they most likely left the townhome with bedbugs and hand, foot, and mouth disease. Luann is sick of the one-sided relationship that she has with Sonja.

Eboni, Sonja, and Leah arrive at the house. Leah acknowledges that the last trip wasn’t her finest moment. Ramona is acting like she is so happy to see Leah and she is giving her the best room. Leah is wearing a Barbie-colored pink coat and looks like she is trying to channel Cher from Clueless. Side note: Did you notice Ramona preening for the cameras?

Eboni thinks that she is like best friends with the ladies now. Luann is having an identity swap party. Leah is going to be Ramona. Eboni is going to be Luann, so she came loaded down with Jovani.

Sonja breaks down when she realizes she has been venting and taking her frustrations on everyone. She has realized that she has been acting inappropriately.

Ramona bought them some comfy outfits. The ladies think the outfits are cheap a*s and don’t care for the stick-on jewels. Sonja shares that she is being treated like a leper. Her date Brad didn’t send her chicken in a pot or flowers when she was sick. Sonja was even on FaceTime with him when he was watching TV.

Sonja just blew up the toilet again and proudly announces it. She should just put a quarantine sign on the bathroom door like a normal person would do. Side note: I just noticed that Eboni’s laugh is like a cackle. Maybe that is why her ex didn’t want to quarantine with her during the pandemic?

Luann confronts Sonja about bashing her when she was on the phone. Sonja now says that she was coming off her antidepressants. She needs someone to talk sh*t about so she can get over her own insecurities. Luann hopes that Sonja is being truthful about her remorse.

Eboni wants to bring the ladies to New Orleans for a girls’ trip. She shares that she found her dad. Eboni got to talk to her dad for the first time. She has two sisters who are welcoming her into the family. Eboni is so grateful that her family is now complete.

Leah announces that she needs to snag a sugar daddy. No man has ever bought her jewelry nor paid her rent and she had to buy her own t*ts. I am frankly not surprised she hasn’t had a suitor who bought her jewelry, but if she wants the other items taken care of, maybe she should have become an escort? I am sure Bunny would have lost her sh*t over that one!

Luann decides to play a game where they blindly pin the lips on Harry Dubin the donkey’s a*s. Sonja is not a fan of the man wh*re Harry since he slept with all her friends. We now get to see clips of the dirty dog Dubin while he was plowing through the NY Housewives like a snowplow in December. Ramona doesn’t want them to bash her friend f*ck buddy Harry. Sonja is stilled pissed at him for sleeping with all her friends.

Sonja goes into the kitchen to get more wine and we can imagine what that will lead to. Ramona tells Sonja that Harry misses and adores her. Sonja scoffs at that comment since somewhere in her dimwitted mind even she knows he is using the sh*t out of her. Poor Eboni must kiss Harry’s photo since she got her lip sticker the closest. She sees him as a raggedy frat boy. Harry then not-so-surprisingly calls on Ramona’s phone and we get a to-be-continued…

Next week is the season finale! Bershan joins the group, and the ladies get to impersonate each other. PHEW, we are almost to the finish line, my friends! Take care, Blurbers, and see you next week!