Home Real Housewives of Beverly Hills News RHOBH Recap: Kyle and Dorit Question Erika’s Story About Tom Confronting Burglars and Son’s Accident, Plus Garcelle Gets Called Out For Her Comments

RHOBH Recap: Kyle and Dorit Question Erika’s Story About Tom Confronting Burglars and Son’s Accident, Plus Garcelle Gets Called Out For Her Comments 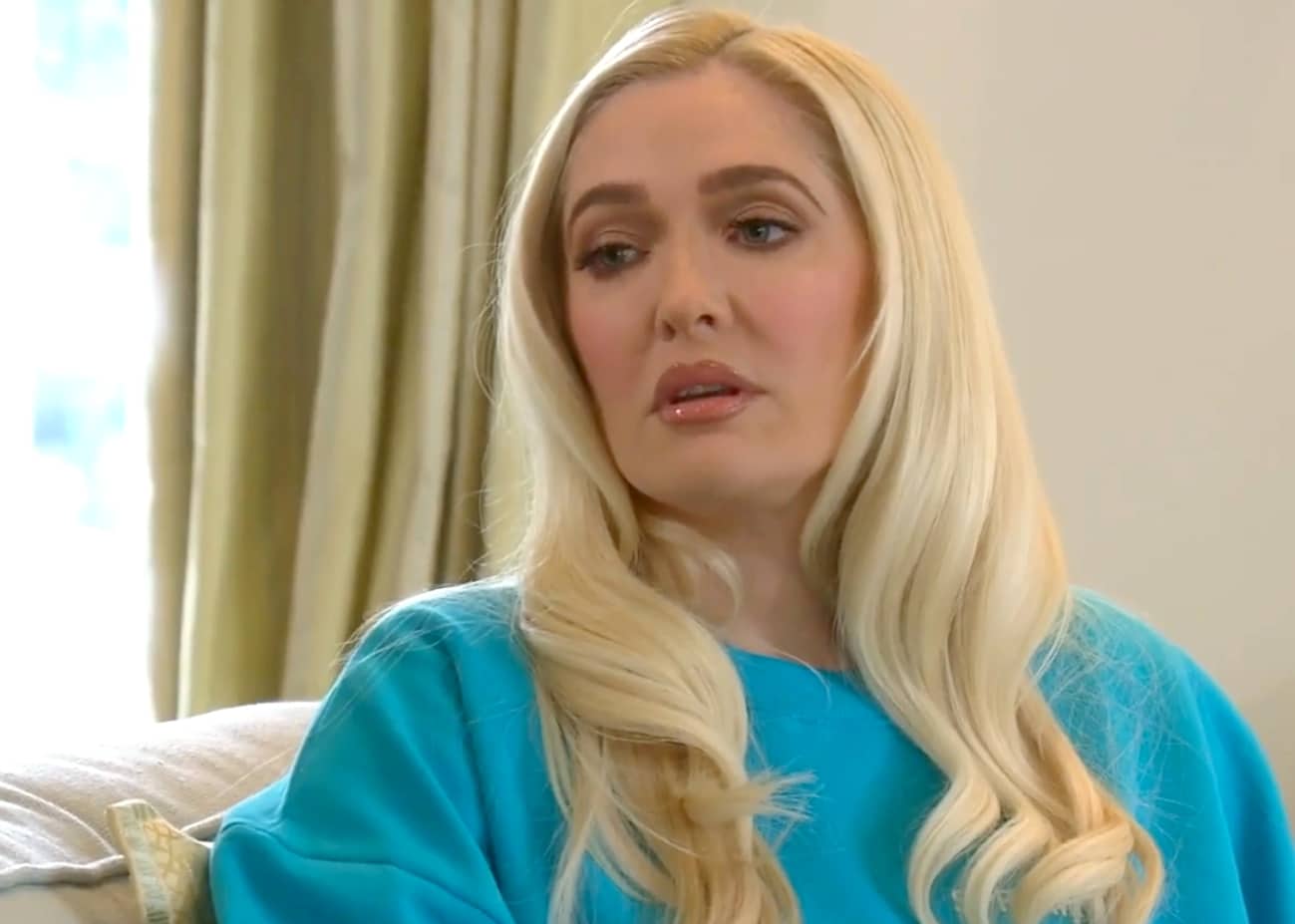 Prepare for another saga spun by Erika on this episode of the Real Housewives of Beverly Hills. It is getting harder and harder for some of the ladies to believe her, leaving them to question everything.

Leave it to Dorit to have a door-to-door invite, roses included, to announce her “evening of romance” (aka the launch party of her wedding gown line). This party is obviously wedding-themed, and the self-proclaimed party planner is stressing over all the details. It is going to be big — well, as big as it can be during COVID times, and not even the rare rainy weather can stop her from planning for extravagance.

OMG is Kathy “talking” to her dog? Kathy claims that she communicates with her dog, Sue, and it suddenly makes Rinna look way less crazy. Kathy has decided to host Kyle, Rinna, and Erika for some facials in hopes of Erika having a better time at her house than she did the last time.

While Rinna and Kathy get gold karat facials, Erika and Kyle catch up about the Sutton drama. Erika states she’s not down to make this better with Sutton, and besides, she has way too much going on in her own life, like the newest drama.

Erika proceeds to tell Kyle that someone broke into Tom’s house. And he confronted the burglars. And now he needs eye surgery. And THEN her son rolled his car five times on the way home from the hospital, so, “Yeah, I’m under a lot of stress.”

TBH, I am not even sure I got all of that BS that spewed out of Erika’s mouth as yet another form of deflection. Kyle tries to unpack the lies story and asks for a timeline. Kyle finds it interesting that Erika doesn’t share crazy situations with the women until way past the event, and it makes it very difficult to trust Erika.  THAT’S what’s putting Kyle over the edge of trusting Erika? Her convoluted tales and not the fact that she could be involved in spending money that belongs to orphans and widows?! Sheesh!

There are SO many questions that need to be addressed here. I mean, we are supposed to believe that TOM, the guy who is apparently old, decrepit, and losing his mind, confronted a bunch of burglars?! And Tom went to the hospital because the situation caused his glaucoma to act up? Now that’s a new one.

And here’s Kyle, admitting this all sounds pretty nuts, but, “Does that mean I don’t believe her? No.” Also, why does Kyle only question Erika’s story in her confessionals? I thought she said if she had an issue with someone, she would say it to their face…

And one more thing, does it snow in Pasadena? Erika claims it was snowy when her son rolled his car, but really? In LA? It is getting harder and harder to believe any word coming out of Erika’s mouth, which is unfortunate because if she IS telling the truth, that is one sad tale.

Garcelle‘s dating coach pays Garcelle a visit. Garcelle has since set up Bumble and gets to work filling out her profile with the coach. Luckily, the coach connects Garcelle with a matchmaker. Garcelle has quite the checklist of what she wants in a man, but honestly, she isn’t asking for too much.  She deserves it all! Especially that guy with those abs — “I see Keith’s abs and then I hear my bedsprings making noise.” LOL. Perhaps Dorit should get busy making Garcelle’s wedding dress?

Crystal shows off her basement remodel plan to Kyle, and she repeats over and over, “It’s like six figures. It’s a fortune.” When Crystal is done showing off and bragging, she sits down with Kyle and they discuss Garcelle’s dinner party. The rifts between the group seem to be growing, and Crystal explains that things appear hard for Garcelle because she feels a bit like an outsider. No one can figure out why Garcelle has a hard time opening up to the group…

Later, PK and Dorit come over for dinner at Kyle’s house. While watching yet another scene of Kyle “cooking,” Kyle jumps right in and tells Dorit the saga Erika told her the other day. Dorit stands open-mouthed as Kyle rattles off the unfortunate events that evidently occurred to Tom and Erika’s stepson.

Over dinner, the couples begin to dissect Erika’s newest story. PK continues to be the voice of reason by asking, “How did Erika know” that Tom had his house broken into. Aren’t Erika and Tom not supposed to be speaking to each other as per legal terms?  Hmmm.

PK and Dorit remind Mauricio about TOM’s car flipping incident, and to that, PK retorts, “What are the statistics that Tom and his stepson both flip cars?” Keep pressing, PK! The husbands talk sense into the women, and the girls begin questioning Erika and what she relays to them. Dorit states that this story is so crazy that it couldn’t even be made up! Buuut, there are so many red flags and reasons NOT to believe Erika, Dorit!

Take for instance the statement Erika said when she told the group she chose not to have the doctor operate on Tom’s brain after HE rolled HIS car (insert eye roll). What kind of wife would forbid that?! You know it’s a bad lie when high as a kite Mauricio can even see through it.

Dorit’s launch party is about to begin, and the women are getting dolled up. Dorit is donning one of the gown creations, and she is excited for the group to see the big reveal of the line. Erika lets Kyle know that even though she is beefing with Sutton, “We’re here for Dorit.  That’s the bottom line.” Let’s hope she sticks to that and behaves herself when she sees Sutton.

Dorit’s home looks like a legit wedding venue, and the ladies are floored as they enter with their better halves. OF COURSE Kathy has her own architect that goes to parties with her because, duh, and we are even treated to seeing Sutton’s boyfriend, Michael. Speaking of Sutton, notice how Erika waves Sutton on over, yet the “door is closed” on their friendship?

Glad Rinna’s dressed practically in a dress she cannot bend in. Sigh. Dorit welcomes everyone and is super proud to be showing off the wedding dress line. Like any Dorit party, there is a big reveal. And no, it’s not Boy George. This time, there are models behind the curtains. A short fashion show ensues, which includes Dorit’s daughter Phoenix modeling a flower girl dress.

Interesting that Dorit cares so deeply about what her friends think about the wedding gowns considering none of them want to ever get married again… well, except for Garcelle and her man of abs. Love how Rinna thought the group would be so thrilled to be surprised by Harry Hamlin, but it’s more like oh sh*t, we need another dinner setting. Harry Hamlin wastes no time talking about his new role, and Rinna explains how she will miss him, and his cooking, when he is gone.

After dinner, the men break off from the women, and here goes Kyle again stirring up the pot. She calls Garcelle out for a recent interview. In it, Garcelle says that the girls are coming after her and she does not feel like anyone is ever on her side.

Naturally, chatty Dorit makes this about her. She questions who the real mean girl is since she feels as though Garcelle still makes jabs at her. “Here’s my real issue with Garcelle: if you’ve got a problem, voice it.” But Dorit feels as though Garcelle is coming up with stuff just to be “provocative.” Garcelle is annoyed that Dorit doesn’t like her OPINION and laughs in Dorit’s face when Dorit says, “I speak four languages and that doesn’t make sense in any of them.”

Dorit asks Garcelle if she actually feels as though all of the women are going after her.  Garcelle makes it clear that Sutton is the only one that has ever had her back.  The point is proven further as the peanut gallery (Erika and Rinna) sit back and let Garcelle take a beating alone. Rinna, the one who wanted to mend her friendship with Garcelle, does not come to her rescue. Not a good look.

Garcelle repeats THAT’S HOW SHE FEELS, but evidently, that’s not enough for Dorit. Garcelle asks if Dorit would rather she tell her the honest truth and that seems to satisfy Dorit. How exhausting and unnecessary. Especially because Garcelle already told Dorit so many times, “You talk too damn much!”