Home Real Housewives of Beverly Hills News RHOBH Recap: Erika is Devastated After Learning Tom May be Institutionalized and Calls Sutton “Small Minded,” Plus Garcelle Gets Emotional Sharing Her Experience

RHOBH Recap: Erika is Devastated After Learning Tom May be Institutionalized and Calls Sutton “Small Minded,” Plus Garcelle Gets Emotional Sharing Her Experience 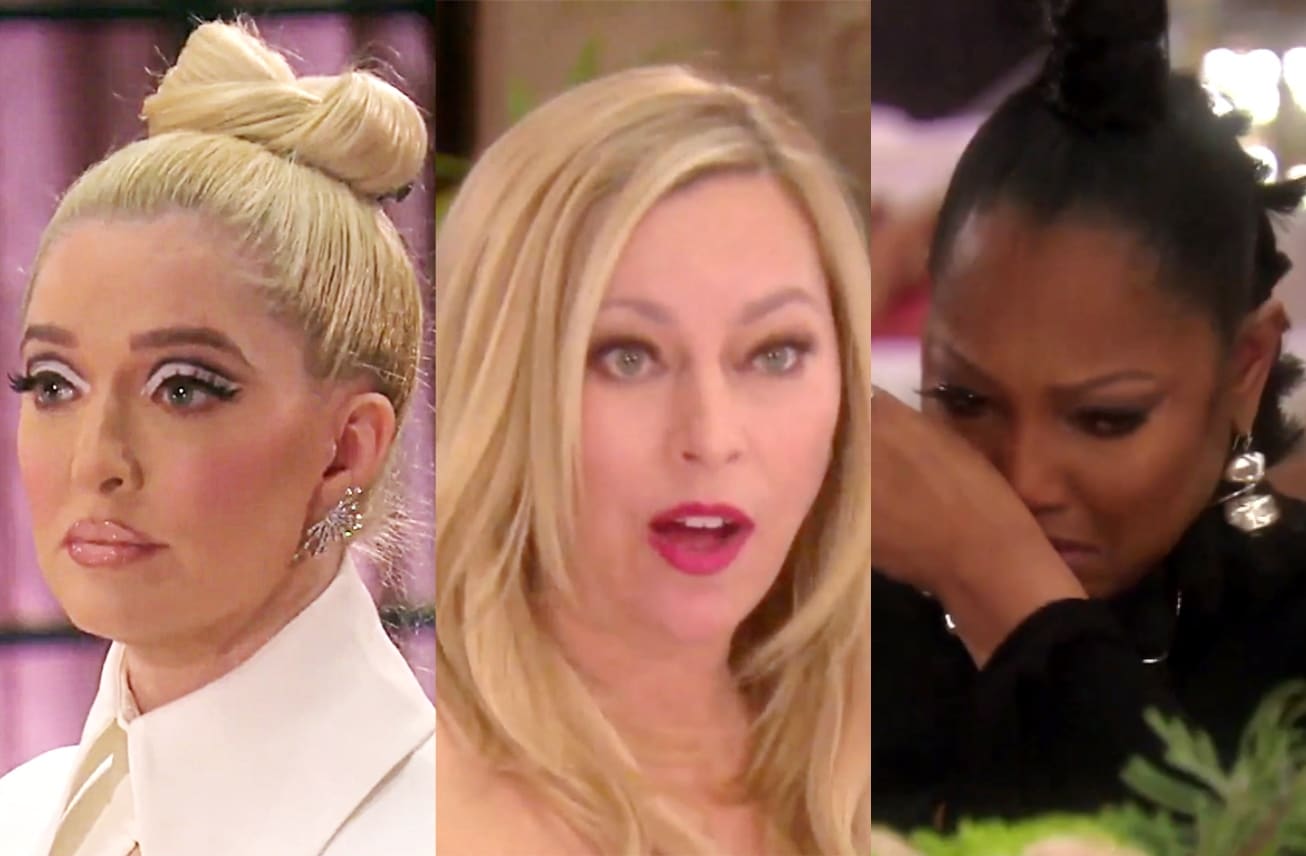 On this episode of the Real Housewives of Beverly Hills, the women are going on a girls’ trip organized by Kathy. Funny to think that Kyle and Kathy didn’t always spend holidays together, but now they are going on trips with friends. Time can heal some wounds… but can it heal Sutton and Erika‘s rift?

Don’t worry — Kathy has packed her fan for the trip. She also touches base with Dorit about her face-off with Garcelle. Kathy states, “I didn’t understand what was going on.” To be fair, when does Kathy ever understand what’s going on?! As Dorit rambles on and on about her “relationship” with Garcelle, Kathy half-listens and organizes her makeup. Kathy has the right attitude with dealing with Dorit — ignore, ignore, ignore.

The ladies all gather at Kyle’s house to kick off the girls’ trip. Sutton shares that she has a really bad sprained ankle, and she swears she “is gonna fight” to get back into her shoes. For now, though, she will refrain from activities and high-heels.

Question: Why are they all driving themselves?! Also, how smart is Erika? Not traveling with the ladies cuz she brought her dog. She is the queen of excuses… and also the queen of lies.

Dying over Kathy’s forgotten cell phone and purse. She advises Kyle to call the “lady” that works at her house and has the “lady” meet them mid-caravan to relay off the phone. God, I wish I was that rich…

“Every day you wake up with a baseball bat to the head.” – Erika. She has hopes that vacationing could ease some of the sh*t she is going through. Now if only those victims were able to escape their problems by going on trips organized by Kathy Hilton. Sigh.

Sutton left the trip to go get some X-rays, and to be honest, it may be for the best. Who needs the Erika/Sutton awkwardness anyway? Kathy has organized a pop-up picnic on the beach, and it is adorable watching those sea lions pose “like Dorit does for Instagram” …Kyle said it, not me. Sutton calls mid-picnic and shares that she will be on crutches and that she will see the ladies back at the hotel.

While at the picnic, Erika discusses how she does not appreciate being called a liar by Sutton, and Dorit, the wannabe Spice Girl, asks for more details about Tom’s injury. Erika, unable to keep her lies straight, blurts out that all of this “allegedly” happened to Tom. I’m sorry, what?!

So many questions! Was Tom supposed to have surgery and he didn’t want it? Erika explains that she did not want Tom having ankle surgery because she didn’t want him going under due to his “TBI” — traumatic brain injury. Plus, Erika says, “After his accident, I was the first one to raise my hand and say we have a problem here.” Interesting that just LAST YEAR (as per the clip provided by the producers), Tom was with it and charismatic. Because of all this and more, Erika refuses to apologize to Sutton and strongly believes that Sutton should be threatened for calling her a liar. Wait, Dorit, do you still think Garcelle is the bully in the group??

Garcelle arrives after filming her segment for The Real. Sutton gets wheeled to her door and fills Garcelle in on her injury. Sutton manages to down a vodka with Garcelle and lets her know that Erika has no desire to make amends. Sutton has her own situation going on with her sprained ankle, so she is hanging up her detective hat. Translation: She doesn’t care to fix the friendship.

LOL at Garcelle wheeling Sutton to dinner. Talk about a moment AND good friends. When Erika sees Sutton in a wheelchair, she is oddly happy, as if she willed it to happen to Sutton. As the women linger around waiting for Kyle and Kathy, who are running late, Rinna calls and texts them. Love it when Kathy asks Kyle if Rinna is her boss, and with that one line, Rinna loses. Everything.

Once everyone arrives, they settle in for dinner and Erika tells the women that she is “fearful.” Kathy states that she is anxious because she still feels as though there are lingering issues going on within the group. She is 100% correct, and it is refreshing to see someone be blunt and honest about it.

Sutton speaks first and says she will not apologize to Erika since she was only asking questions. Sutton denies calling Erika a liar, but Erika could care less about Sutton and her feelings. Erika retorts, “Why are you speaking to me?” Kathy puts her foot down and asks for a little forgiveness. Erika stands firm and explains that things with Sutton are not going to be fixed.

Sutton is tired of being made out to be the bad guy, and Garcelle jumps in to defend her girl, Sutton. She questions how pushing someone could help them and likens the Sutton issue to that of Denise’s last season. It’s not helping anyone by pushing them to tell the truth. Kathy can hardly keep up. She is fed up and exhausted with all the drama that continuously gets brought up, even after it has been settled.

Dorit loves dragging an issue on for far too long. Again, she asks Garcelle to be upfront, honest, and transparent. Rinna wants to know why Garcelle feels like an outsider, and Garcelle corrects Rinna and states that she does not feel *accepted* in this group. Rinna tells Garcelle that she needs to make more of an effort when it comes to friendship, and she believes that Garcelle is not working hard enough to be friends with the group.

When Rinna tells Garcelle “you need to be straight up” and “honest,” Garcelle laughs in her face. Rinna calls Garcelle shady, yet she was the *friend* who sat back by the table, snickering with Erika. Funny how Rinna feels as though she knows how to be a friend, when in reality, she sucks. Garcelle clarifies that this is not about race, but she points out that maybe it’s a little weird for her to be the only Black girl in the group. She becomes emotional talking about how her whole life she has fought to fit in, and the women suddenly feel like a*sholes for giving her so much sh*t. Rinna LOVES that Garcelle just got vulnerable (aka Rinna made her cry), and Garcelle believes that this might’ve been a breakthrough for all of them.

The next morning, Sutton is hobbling around, and Garcelle scoops her up for the sound bath. Kathy decides that the sound bath would be cleansing since she had one at Kim K.’s baby shower and it was amazing. Somehow, Kathy was able to fall asleep during it, AND she doesn’t even have her fan with her!

Erika missed out on the sound bath and Rinna explains that something new came out about Tom on Page Six. Tom’s brother is now his conservator, and he is planning on putting Tom in a mental institution.

After the sound bath, Erika has Kyle and Rinna over to discuss what’s been going on in the news. Erika states she is ready to have a nervous breakdown and can’t fathom Tom going into an institution. She further explains that she knew about this article during dinner and sat through all the nonsense fighting harboring this news.  Erika says that Tom needs a caretaker, not to be put into a home where he will rot. She questions where Tom’s family is and she describes the situation as tragic. One thing on top of the other and yet Erika still wants to protect Tom.

Erika states, “Wanna know who your friends are? Get old and go broke.” Buuuut, I don’t see Erika running in to save Tom. Which one is it? Tom’s a terrible, mean ex-husband, or an old man that needs help????