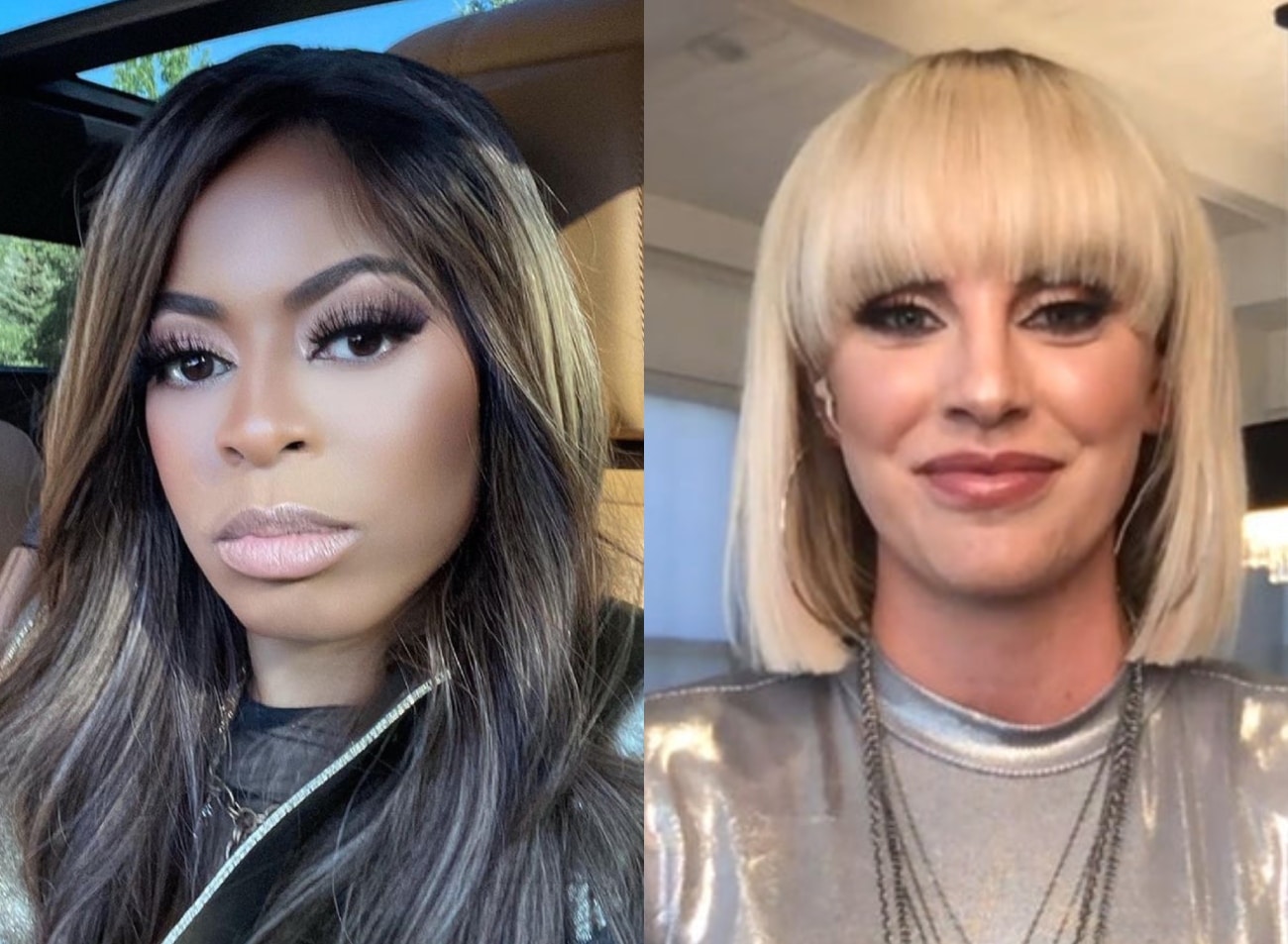 Mary Cosby is slamming Whitney Rose as a “liar” and a “racist” after Whitney weighs in on the cult rumors surrounding the First Lady.

As Real Housewives of Salt Lake City fans well know, Whitney was probably Mary’s biggest ally on the cast last season, even attending a service at Mary’s church with her father. However, in a new interview, Whitney revealed that she and her co-star had a major falling out and Mary is no longer speaking to her.

“I thought there was [a connection]. I truly thought Mary was one of my friends,” she said on the Housewives Nightcap series, which has been reshared by Housewives of SLC on Instagram. “I really respected her, I was good friends with her family members, and she was so great with my dad. But things changed.”

When asked if their issues have anything to do with the cult rumors, which have reportedly been circulating for years, Whitney confirmed that the rumors have everything to do with it. She then went on to explain how she initially tried to block out the gossip, but it eventually became difficult to ignore.

“I never really gave it any concern. And as Mary’s friend, I felt like it was my job to not go there, to not look into it, to just turn my head, and don’t acknowledge it. Block it,” she said.

“But season two it became very hard because these people started coming into our lives, and reaching out to us, and it was really hard,” she added.

When asked if she’s attempted to get Mary’s side of the story, Whitney said her co-star refuses to speak to her about anything at this point.

“Mary won’t speak to me so I, unfortunately, don’t have the opportunity to talk to her about it,” she revealed. “And that’s the type of friend I am. I will go put out the fires then shut the door and be like, ‘Girl what is going on? Why are they saying this?’ But she never affords me the respect of that conversation.”

She added, “It’s been really hard. It’s hard not to believe it when you can’t really get an answer on the other side.”

Unfortunately, once Mary got wind of Whitney’s remarks, she took to Twitter to slam her former friend, alleging she’s a “lying racist” like her cousin, Heather Gay.

“Whitney Rose is being so hungry with her lying self .. She knows she is not that girl who puts a fire out,” she wrote. “Yes she’s racist I said it racist! Like her cousin.. she’s talking like she knows me .. she has no backbone she’s not real so fake! I can’t!”

But, Mary wasn’t finished just yet as she continued to blast Whitney by insisting someone put her up to making the comments before hurling several other accusations at her.

“Whitney Rose you are the Biggest liar. Who put you up to this?” Mary wondered. “We know everything you do you are told! No we don’t talk your [sic] fake so fake I can’t even! Real people will see right through you! Leave me alone you don’t want to get me started! I promise you that liar!” 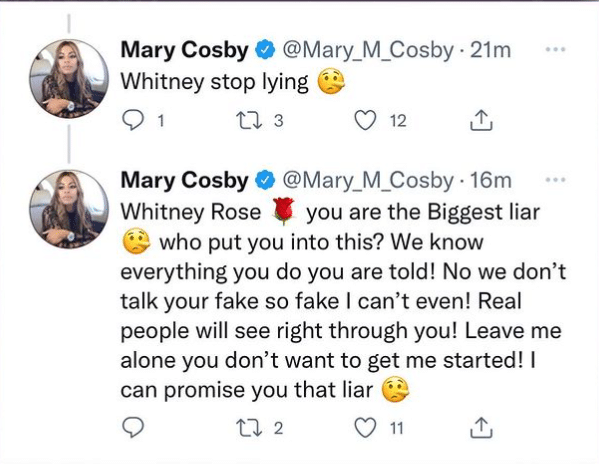 “Whitney Rose is the Biggest liar everything she does she is told to do!” she snarked in another tweet. “You need to stop lying because your [sic] being the most [this] season with your pole dancing mentality you and i will never be friends why would i talk to a fake Whitney.” 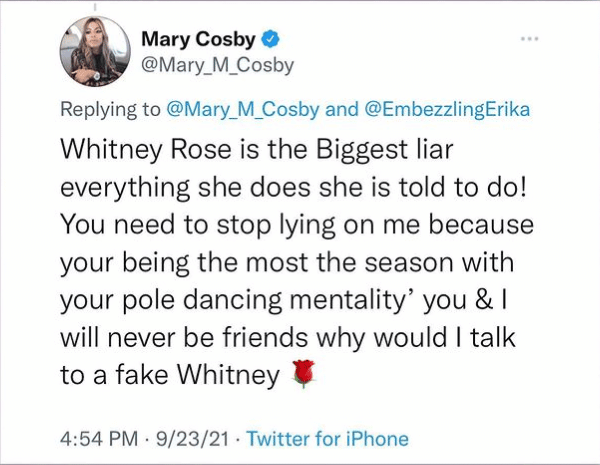 Mary then referred to the blonde beauty as a “bobble head” and demanded that she “humble” herself before alleging she “took advantage” of several women in a club bathroom. 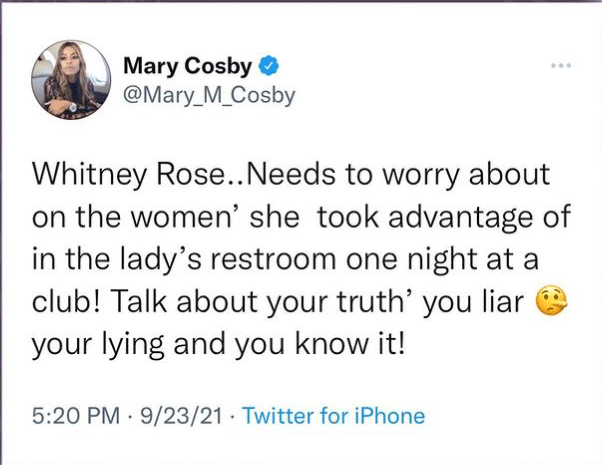 “Whiney Rose needs to worry about [all] the women she took advantage of in the lady’s restroom one night at a club!” she tweeted. “Talk about your truth you liar [you’re] lying and you know it!”

Following Mary’s rant, Whitney chose not to engage as she shared a simple post on Instagram, stating, “I don’t respond to crazy or baseless accusations. I really hope we can all try a little harder to lead with love.” 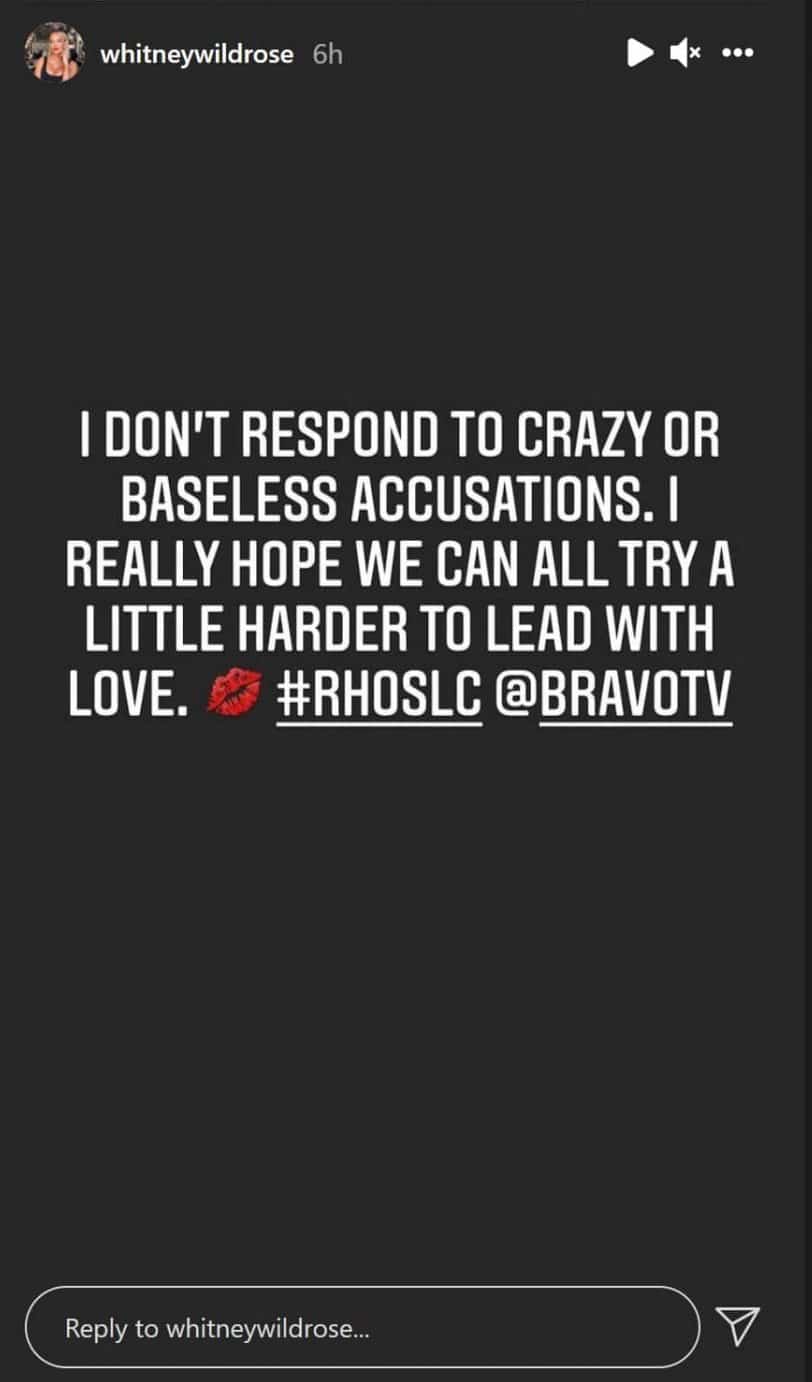