Home Real Housewives of Beverly Hills News RHOBH Reunion Recap: Garcelle Accuses Lisa of Making ‘Race’ Comments as Dorit Yells at Garcelle, and Erika Reacts to Fans Who Want Her Fired, Plus Was She Faithful to Tom?

RHOBH Reunion Recap: Garcelle Accuses Lisa of Making ‘Race’ Comments as Dorit Yells at Garcelle, and Erika Reacts to Fans Who Want Her Fired, Plus Was She Faithful to Tom? 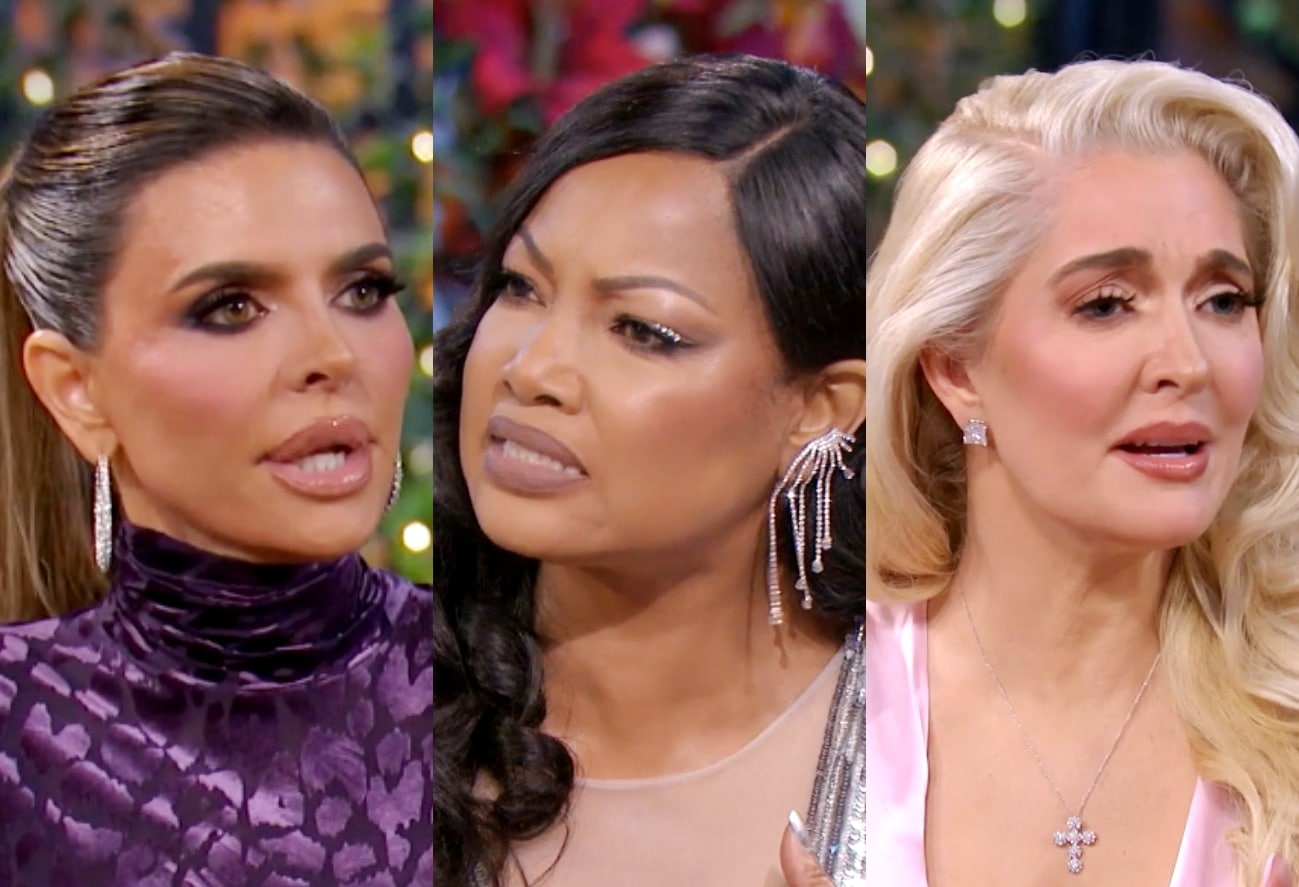 As the women pile onto tiny sofas (what happened to the snazzy, one-woman chairs?), Andy wastes zero time getting to the good stuff. He tells Erika, “We’re gonna put you on a skewer and I’m gonna fire up the barbecue.” YAS. And then he proceeds to introduce all of the cast members.

Andy welcomes Crystal to her first-ever reunion, and no, she is not wearing her infamous ugly leather pants. But those should def go in the Clubhouse. Sutton has heels on and has since retired the boot. Dorit is wearing a dress embellished in pearls, and you guessed it, it’s part of her ready-to-wear collection. Garcelle is not shy about sipping her tequila for her first in-person reunion — could you blame her? Rinna is there looking ridiculous in her ponytail, and the women name her persona Priscilla today. Kyle is celebrating her 11th reunion, which is absolutely insane. And then… there’s Erika.

“Hey, Erika! What’s new?” Oh, Andy came to serve it today. Erika states she is looking forward to closing this chapter and moving on. Andy reminds her that new things come out every day regarding her legal issues, and Erika states that she is happy to say all that she can share with the viewers. She further claims she still does not have the answers to this day and denies the fact that she is a cold person. FINALLY, Erika <sort of> addresses the “alleged victims of all of Tom’s alleged misdoings.”

Erika explains that she was disappointed and angry after viewing the season, especially regarding the women seeking legal advice. Sutton makes it clear that she didn’t talk to HER attorney — she simply spoke to a friend who happened to be a lawyer. And then SUDDENLY, all the ladies chime in/nod that they also spoke to their lawyers. Erika lets Andy know that her lawyers have told her to back out of the show, but she states she is not a quitter and she refused to run away from what was coming at her. Well, that and the show is her main source of income these days. Erika has not been charged with a crime, but she adamantly goes against being fired from the show because of all her legal drama.

No one worry — Sutton has her face roller in her trailer. Sutton admits that she did cry a lot this season, and Andy probes her about life with her mother. Sutton explains that she has tried to follow her mom’s advice, particularly when it came to her drama with Crystal.

Sutton addresses her “business” (that Rinna scoffed at during her WWHL visit) and how it grew “excrementally” throughout the pandemic. She also shares how she has finally moved into her new house last week and is feeling great. Anything could be better than having Kyle as a landlord. Apparently, Sutton almost burned Kyle’s house down, and the house is no longer on the market because they must do some repairs on it after Sutton stayed there for nearly a year. LOL.

OMG, Erika is trying to date and is looking for “something with a big penis” since she would “like some hot sex.” Okay. Speaking of boyfriends, Sutton’s boyfriend Michael broke up with her over Valentine’s weekend. How cruel! Now she is dating again and loving it. Did you catch Erika’s dig at Sutton? “Who’re are YOU dating?”

Garcelle feels like since she opened up to the women, she has felt like more a part of the group. Dorit applauds Garcelle for being vulnerable, but she states that she feels as though Garcelle can be “passively provocative.” Dorit believes that Garcelle acted in certain ways just to be relevant and Garcelle does not like that. In fact, Garcelle demands an apology from Dorit after Dorit called her a bully. Dorit tries to explain she chose the word “bully” because Garcelle was incessantly badgering her.

Andy wonders why Dorit never called Erika a bully, but Dorit claims that Erika only had isolated incidents with other women. Dorit apologizes to Garcelle for using the word. Then she follows it up with “but” Garcelle says a lot of stuff in her confessionals. Garcelle believes she cannot win with Dorit — she says too much, she doesn’t say enough…

Rinna tries to insert herself, and when Garcelle tells her to just wait her turn, Rinna retorts, “I can say whatever I want. Don’t you tell me to do a thing.” If you wanna talk about someone trying to stay relevant, there’s Rinna, sh*t talking from the sidelines for some camera time.

Dorit straight loses it on Garcelle since she keeps getting cut off. Garcelle reminds her not to talk about things if she wasn’t even there. Eventually, the ladies agree to wipe the slate clean, and Garcelle states, “I don’t dislike her at all.”

Garcelle and Rinna were friends for 20 years and then the relationship crumbled due to a lack of trust. Erika injects herself into the situation and asks if Garcelle wants to punish Rinna for the way she treated Denise. Rinna wants Garcelle to let the Denise issues go, and Garcelle makes it clear she has let the mouse go.

Rinna apparently said Garcelle should have never brought race into the show because this show is not that kind of show. Rinna denies ever having said that, but she freaks out that Garcelle never confronted her about it. Love how Garcelle calls Rinna out and then Rinna turns the blame on Garcelle! Garcelle repeats that she doesn’t trust Rinna and that she is *open* to moving on, but when Rinna questions why Garcelle threatened her job on WWHL, Garcelle gets annoyed again.

Rinna wants an apology from Garcelle for INSINUATING she said something about race. What is happening here? Even Andy can’t figure out where Garcelle and Rinna go from this point. Garcelle reminds Rinna who she used to be, and in turn, Rinna states that her own husband believes Garcelle looks miserable. Garcelle thinks her expectations of Rinna are higher, and the situation finally gains some closure when Rinna jumps up to go sit by Garcelle on the couch. Love it when Dorit mumbles, “She just wanted to show her outfit,” and I kinda have to agree. Garcelle finally gets broken down, and after much ado, the ladies have decided to move on. “I like you too much to do this anymore.”

Oh dear God. Kathy Hilton enters the stage with her notebook paper receipts. She DOES notice that the set is modeled after her yard, and she shares that 11 years later, she decided to join because Kyle pushed her. Kyle smiles brightly and Andy asks Kyle about her nose job. Kyle reminds us all that she broke her nose shooting Halloween. Speaking of Halloween, Kathy set Michael Myers up to surprise Kyle pre-reunion, and I have to admit, it was classic.

Andy switches gears and questions Erika about her relationship with her ex-husband, Tom. Erika explains that a woman would defend her husband even IF he never read her book OR attended her Broadway debut. Turns out, according to Erika, Tom was in DC (cheating) when he did not come to see Erika’s show in the city. When asked if Erika was faithful to Tom, her eyes seem to tell it all, but we must wait and see until part two of the reunion next week…