Home Real Housewives of Potomac News RHOP Recap: Wendy Calls Gizelle a “Bully” and “Mean Girl,” Mia and Candiace Apologize to Each Other, Plus Ashley and Gordon Butt Heads

RHOP Recap: Wendy Calls Gizelle a “Bully” and “Mean Girl,” Mia and Candiace Apologize to Each Other, Plus Ashley and Gordon Butt Heads 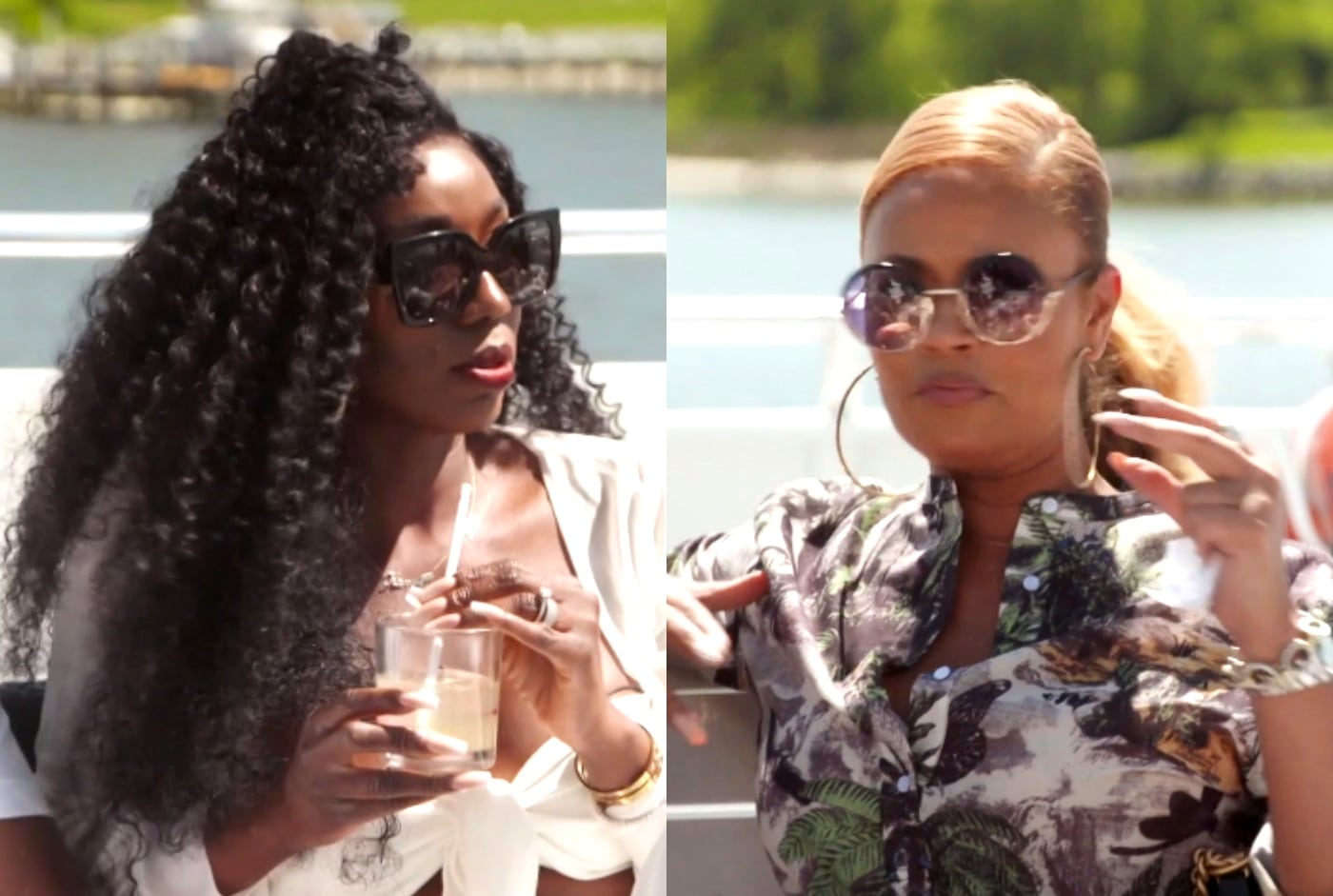 We are back at Foxy’s for more uncomfortable dinner moments with our Real Housewives of Potomac. Let us pick up where we left off and see if everyone makes it back to the Airbnb in one piece, shall we?

I will apologize in advance that this episode is a total bore, but we always have the reunion to look forward to, right? Grand Dame Karen issues all the men a warning: “If you all let your women continue down this road, they’re not going to look like this at 58.” More importantly, she needs to warn them that this “job” is not going to last forever so you better be putting your coins in the bank.

Robyn is feverishly Googling texting a producer who is looking for a hotel room for the two divas. Who believes for one minute that they are paying for this room out of their own pockets? Robyn and Gizelle are forced to accept 2.5-star accommodations, so maybe next time they will show up on time! Side note: I think these two were trying to exert their housewife dominance over the group by first not wanting to go on the trip, and secondly leaving the group home hoping everyone will chase after them. Both attempts at a power grab were utter failures.

Wendy has even recognized that the trip has been a complete nightmare. She is acting like she is nonplussed by everything going on around her, but she is just relieved that she has been able to keep track of Eddie. Side note: Wendy is totally grossing me out eating her food and chomping on it like a chipmunk. She is also chewing with her mouth open, and that is not behavior suitable for an esteemed professor.

Karen thinks that Robyn looks miserable since Juan did not join her. She thinks Robyn and her period are coming for her since Robyn has had resting b*tch face this entire trip.

While in the van, Gordon’s inside voice comes out, and he declares that he “wants a piece of a*s.” Gordon doesn’t specifically state whose, but we are all to assume it is his lovely wife Mia. The conversation then goes into a bizarre game of show and tell. Chris, the Eminem wannabe, volunteers to show his brown d*ck. Candiace dives over the seat and tries to stop her husband from showing the others that it is pink, not brown.

Gordon, who appears to not want to be outdone by Chris, decides to pull his out and everyone is pretend-terrified of seeing that. He decides to grind it on the seat in front of him, and I hope they have Clorox wipes on this van. True confession: I honestly would have been curious if I had been in that van to see both.

Gordon, who is all sexed up, wants to see some p*ssy poppin’, and Karen looks disgusted by his lack of class. Ashley cannot understand why Michael can’t get away with anything with this group, but newbie Gordon can show his d*ck. Michael is no innocent either, dear Ashley. Gordon and Michael together would be a trainwreck no one would look away from.

While in their room, Chris and Candiace discuss the argument at the table with Ashley. He tells her she played right into Ashley’s hands. Chris wants her to keep her fussing and cussing to one isolated moment. He tries to make Candiace see that Ashley is not that bad. Candiace has pinky promised for some good vibes only. Time will tell, but I am not optimistic.

Gizelle and Robyn are done with the bitter hostess known as Wendy who gives zero f*cks. She is going to take her hobbled foot to the hotel. Mia is willing to give up her room to the green-eyed bandits, and she will even change the sheets for them. Askale is concerned they are leaving in the middle of the night and traveling to a hotel in a strange town. Have you all noticed how she has been inserting herself into every scene? It is like she is the Elf on the Shelf appearing at random.

From their locked bedroom, Eddie watches from the window, and he reports to Wendy that the toxic twins are leaving the premises. Wendy thinks they like to make it all about themselves and everything is going according to plan for her.

In the morning, Mia and Gordon chat about the sketchy accommodations with no valet and turn-down service. Gordon has to cook them breakfast since they do not have a continental breakfast here. Mia then discusses what transpired with Candiace, and she has concluded that she has a lot of growing up to do and that is why she has acted out in the way she has.

Karen and Wendy chat about how tacky it was for Gizelle and Robyn to leave in the middle of the night. She thinks that Gizelle’s sense of the smell will bring her back to the house since all she does is eat. Ashley calls Gizelle and she bashes Wendy’s hosting talents. Wendy, of course, overhears this and thinks Gizelle is clearly acting confrontational.

Ray arrives to join this rowdy group, and Karen lets him know how this group went buck wild last night. Ray is 75 years old hanging with this group, and he reminded me of a grandpa when he was walking in to check on the youngins.

Gizelle and Robyn arrive back at the house. Ray questions Gizelle about her broken toe. Gizelle blames Karen for her injury. Ray hilariously states, “Why didn’t she go for the neck?” Gizelle likes Ray, and she just wants him to live since he does bring some levity to the situation. Can we please get on with this storyline?

The RHOP crew head out on a boat, and hopefully, there are plenty of life preservers. Robyn chats with Askale, and she does not think Wendy put them in the attic to specifically target them. She thinks that Wendy is just looking for an argument. Robyn claims they used to click and now she thinks that she read it differently. Askale feels like she is in the middle of this dispute. Mia overhears the conversation, and she goes upstairs and tells Wendy what was said, but her translation is way off. She just laughs it off that she interprets conversations differently.

Mia then asks Ray about their vow renewal, and he thinks now is the best time. After finding out he is 75, I must agree with Ray’s logic.

We then get into how Robyn and Gizelle had to escape in the middle of the night due to terrible accommodations. Robyn is disturbed that no one chased them down and begged them to stay. She thinks they should have since Freddy Krueger could have gotten ahold of them.

Robyn then decides to insult the men in the house by claiming they are all pissing on the bathroom floor. Come on now, Robyn, that is what happens in your house when you live with one man and two boys! Robyn thinks her solution to run away made perfect sense, and she resents Wendy being so aggressive.

We then get the typical housewife insults with Wendy calling Gizelle a “mean girl” and a “bully.” Spot on, Wendy! Gizelle also describes Wendy as “angry” and “combative.” Not sure how she got that from Wendy simply ignoring her bratty behavior! The men wisely decide to exit downstairs so they do not have to deal with this nonsense.

Mia and Candiace then decide to talk about their issues. She acknowledges that she said something that struck a nerve. Mia apologizes for hurting her feelings. Candiace resents the comment about the low-budget video. She has worked hard to achieve her dream of being a video vixen, and she is scared she might not succeed. Candiace is afraid that her creative journey will be criticized.

Candiace claims that she did not know the background about her mom. Mia would prefer that Candiace come for her instead of her mom, who is struggling with sobriety. She very sadly shares that her mom could not attend her parents’ funeral since she was embarrassed about wearing shackles to the church. Now that is some reality there, and it’s incredibly sad to imagine going through that as a family.

We are back in the van, and Ashley falls asleep and Gordon calls her out. Ashley is pissed that he cannot recognize she has a newborn at home and must steal sleep whenever she can. We are left with Ashley being disgusted with Gordon and his unruly behavior.

Next week, Ashley is continuing to have intimacy issues with Michael, and I threw up in my mouth at that scene. Gizelle’s girls also share how they truly feel about their parents’ relationship. Be well, my fellow Blurbers, and let me know what you all think about the episode and their choices of reunion attire!