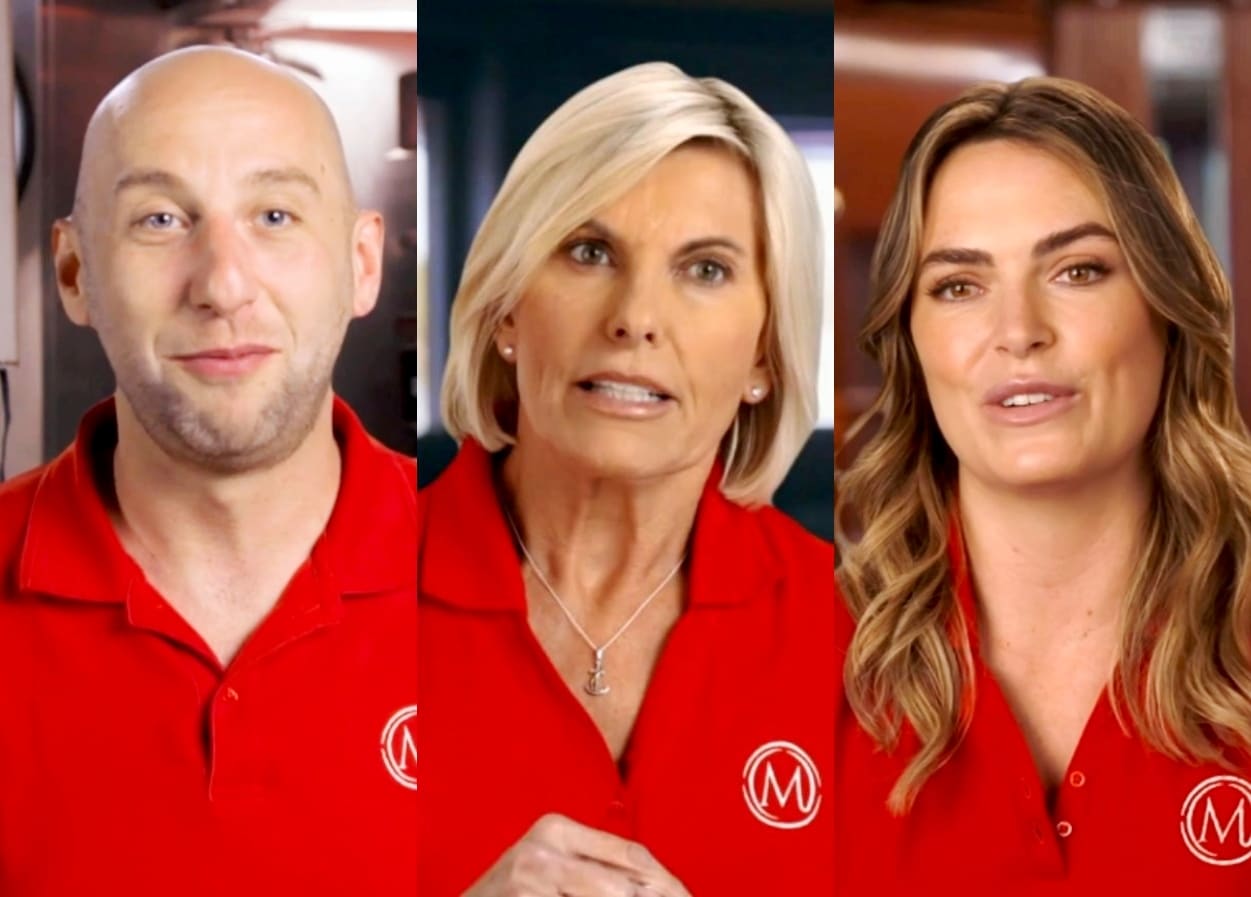 On the finale episode of Below Deck Mediterranean, the charter season is nearing the end, but certain members of this crew are unraveling. Between a lack of help onboard, a lack of sleep, and one needy chef, will they be able to pull it all off? Plus, the reunion sheds new light on some of the most talked-about drama this season…

The guests’ egg orders have 100% put Mathew right over the edge. His headspace is not the best and he is most definitely spiraling. The lack of stews and the demanding guests are really pushing Katie to the brink, but she knows she has to power through. Now if only Mathew understood the importance of that. Mathew calls the guests “relentless,” but I am here to remind him this is what he signed up for… ya know, cooking for other people… aka, being a chef.

While the guests are out on water sports, the guests are looking for some assistance from the girls. This is what happens when they are stretched too thin. It’s bad when one of the charter guests comes down looking for Katie. Katie finally realizes she made a bad call by getting rid of Delaney since the workload is now getting more than she can handle, especially while Courtney is off the boat setting up a picnic lunch at a fortress.

It’s a race against the clock trying to get the food to the picnic and trying to get the toys back in before the yacht gets into the shallow water. The anchor is dragging and things could take a disastrous turn, but luckily, after much chaos, the crisis is averted.

Post lunch, the guests get back on board, and Mathew accosts Katie for her opinion about his dinner service. Loving it when Katie tells him, “I really don’t care,” and, “I don’t have time.” Someone needs to knock him down a few pegs to reality. Katie is more concerned about staying awake rather than planning Mathew’s menu.

Malia‘s gonna feel like a jerk when she realizes Lloyd was slacking off because he was making her a thank you card. Also feeling like a jerk should be Mat. He was wigging out all day, but it turns out that the guests absolutely love his dinner meal!

After Malia suggests Marten, the chief engineer, ask Lloyd to do the next crossing, Lloyd’s entire attitude turns around. The guy is amped and thrilled to know that he has a future plan and a great one at that.

Katie is going on 19 hours without a break, but the guests don’t show any sign of stopping. In fact, at 3:09 a.m., they hop into the hot tub, and Katie wonders if she can drug them with sleeping pills. LOL? At 4:38 a.m., Katie heads down to bed and she is totally shot. Remember — she did this to herself. However, the girl needs some sleep.

The next morning, Mat is trying to finish the season as simply as possible, and Courtney is on breakfast service while Katie finally gets a break to sleep. The whole crew is amped that this is the final day of the final charter, but they still have to get these guests settled up. The yacht gets docked without a hitch, and it’s bittersweet that it was the final docking for the deck crew. The guests say farewell and thank them all for a memorable experience.

The crew sits down in the salon for the tip meeting, and Captain Sandy commends Katie for stepping up to the plate. The captain further states, “Mathew, you continue to be the opposite of the person who stepped onto this vessel.” Is that a compliment? And then Captain Sandy starts crying over Malia.

Captain Sandy announces that she will be joining the crew for dinner AND that she plans on inviting the quarantining chef, Luka, onto the boat as well. When the backup chef makes his debut, things are a little awkward hearing about his experience sitting in four walls for four weeks. YIKES. Mat claims HE feels uncomfortable seeing Luka, but I am unsure how that makes him feel that way considering Mat finished out the season and got all of the chef accolades for the season. I guess any reason for him to throw a tantrum is good enough for Mat.

Luka seems nice enough, but Mat explains for dinner he needs to stay completely sober, otherwise he will attack the backup chef. Luka says goodbye to the crew after a short time and I am confused. Wait — he couldn’t come for dinner? Just a lousy beer?! Poor Luka.

At dinner, Captain Sandy toasts to the “best crew” she has ever worked with. Katie thanks everyone because, let’s get real, she would have never been able to pull off the last two charters without the entire crew. Captain Sandy asks everyone to talk about the highs and lows of the season, and she reminds us all how Mat left the crew to fend for themselves and cook for the guests. Mat spins it as a “team-building” exercise, and luckily, they can all laugh about his early abandonment.

A toast is made to Dave, the lead deckhand, but unfortunately, Malia still is not interested in him romantically.  After hanging out, Sandy exits and Lloyd gives Malia her thank you card. I mean, how adorable is that deck crew?!

It is definitely going to be a messy night for the crew once back on the yacht. Mathew can’t even walk, and they are dancing and spinning around on the lazy Susan. Sure hope Dave doesn’t get hurt again, although since it’s the end of the season, at this point, YOLO.

It’s departure day, but everyone is hungover. Not sure how they are going to pack up their lives and function like humans. Courtney says goodbye, rather quickly, to Captain Sandy, and Mathew admits that he has some growing up to do. He thanks the captain for giving him chance after chance, and Lloyd tells Sandy he “couldn’t have picked” a better captain. Mzi gets borderline emotional asking Sandy for a reference, and Katie thanks the captain for all of her support (Where? When? How?). Katie has learned you can’t always please everyone and is grateful for the opportunity on this yacht. Malia and Sandy are just, like, twins… and Sandy looks at her the way a proud mother would.

The crew preps for the Split house, and they all hop into the cab after saying goodbye to the yacht and get on their way. When a producer asks Katie, “Um, so, Katie, what really happened in Split?” things get awkward. Crew members shout out, “A few things happened that would never be spoken of again,” although Lloyd claims it was all very PG. We may never know (except for maybe the reunion) because after all, “What happens in Split, stays in Split.”

Immediately following the season finale, the Below Deck crew gathers for the reunion. The gang’s all there, minus Lexi who “very firmly declined” Bravo’s invitation to attend. Andy reminds the viewers of a few of the boat-mances that never were this season. Courtney explains that Mzi was just a special friend who she connected with the most, and as of now, Courtney is single and apparently channeling Ke$ha (what is UP with her?). Lloyd shares that he is in a relationship and states that he has had a great amount of support behind him coming out on TV this past season. Malia is dating “hot Jake the engineer” despite any rumors that Captain Sandy sparked on her Cameo appearance regarding Malia’s sexual preference.

Chef Mathew claims he had a panic attack when he left the first time, and Captain Sandy praises her crew for jumping in to help. Captain Sandy defends her decision to stick with the devil she knew, rather than bring on a new chef, particularly because Mat is a talented chef… who just happens to be a loose cannon.

When it comes to Lexi, Captain Sandy reminds us all that she didn’t see Lexi’s behavior, but she states that had she seen it, Lexi would have been fired immediately. On social media, Lexi blames it all on a bad edit, but her former crew members disagree. The “brief stew” Delaney makes an appearance, and Katie stands by her choice to ask Delaney to leave the yacht. Another relationship gets addressed, and that’s the one between Malia and Captain Sandy. Sandy discusses how she lost trust with Malia at one point, but they are now on good terms after making it through the rocky patches of the season.

In the end, Andy begs for some Split information, but everyone remains pretty mum, and even Courtney manages to keep the secrets through her slurring. Mat shares that he saw everyone naked and that it was “a big cuddle puddle,” which makes me cringe. Looks like we will never find out what happened in Split OR what the heck Courtney has been drinking during the reunion, but we can all agree that this crew is special!