Lala Kent and Randall Emmett are reportedly at odds when it comes to co-parenting their 7-month old daughter, Ocean Kent Emmett.

Less than a month after the Vanderpump Rules couple called it quits amid rumors of Randall’s alleged infidelity, an insider claims Lala is doing most of the heavy lifting when it comes to their child

“There isn’t much co-parenting going on at the moment,” an insider told Us Weekly on November 10. “She’s a full-on single mom taking care of Ocean, at least for now until they have a co-parenting schedule in place.”

According to the insider, Randall, who also shares daughters London, 11, and Rylee, 8, with ex-wife Ambyr Childers, has been working a lot, which has led to Lala “predominately taking care of Ocean.” However, according to Randall’s attorney, he’s actually cut back his professional responsibilities.

“They’re both focusing on Ocean and they’re working together on co-parenting,” Randall’s lawyer, Benjamin Valencia II, explained. “Randall has absolutely been co-parenting with Lala since the split. He hasn’t left Los Angeles County since the split and has been available to Ocean 24/7 at all times and has even gone as far as restricting his work hours to be available.”

Meanwhile, a second source said Lala and Randall are in the “midst of figuring out” a co-parenting plan for Ocean.

“It’s a private matter but they’re hoping to figure out some sort of schedule that works well both for them,” the insider stated. “Randall and Lala’s focus right now is on Ocean and making sure she’s taken care of and that both of her parents are in her life no matter what.”

In other Lala Kent news, the Pump Rules star took to her Instagram Story on Wednesday night, following the sharing of the Us Weekly report, and shared a couple of cryptic posts, the first of which featured a quote from poet Edgar Albert Guest.

“When things go wrong, as they sometimes will, when the road you’re trudging seems all up hill, when the funds are low and debts are high, and you want to smile but have to sigh,” the message read.

It also said, “when [she] might have won if [she’d] stuck it out, don’t give up though the pace seems slow,” and ended with a statement of encouragement.

“So stick to the fight when you’re hardest hit, it’s when things seem worst that you mustn’t quit,” the quote concluded. 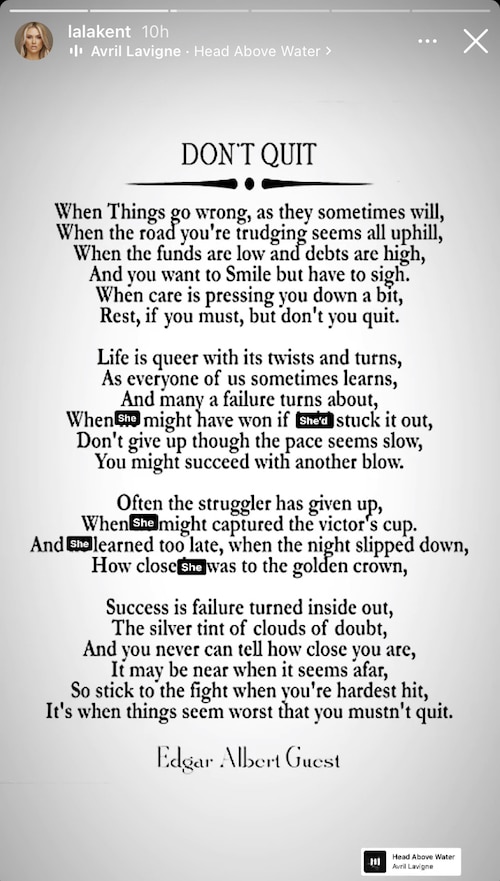 In a second, even more telling post, Lala wrote, “What’s done in the dark, will always come to the light.” 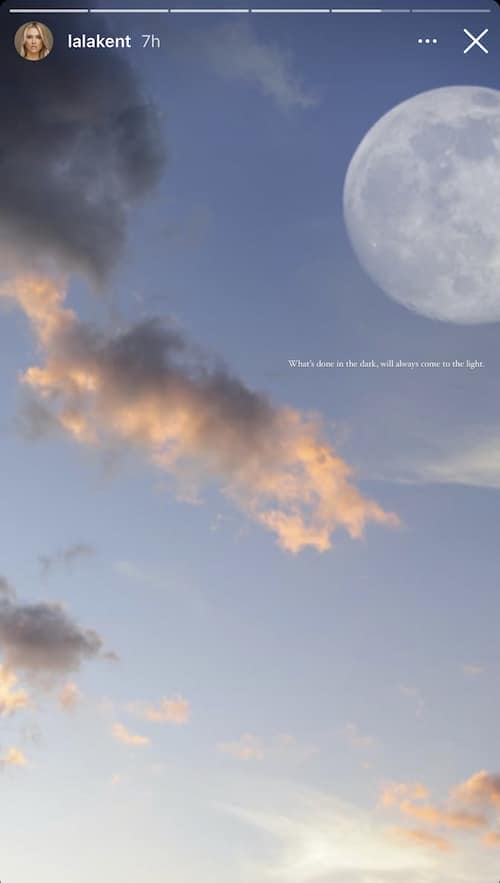