Home Vanderpump Rules REPORT: Lala Kent Has Split From Randall Emmett, Moves Into Hotel With Daughter After ‘Liking’ Post About Him Cheating

REPORT: Lala Kent Has Split From Randall Emmett, Moves Into Hotel With Daughter After ‘Liking’ Post About Him Cheating

Lala Kent is reportedly staying at the Beverly Hills Hotel after breaking up with her fiancé, Randall Emmett, amid rumors claiming he’s been unfaithful.

Following a series of photos of the producer and director in Nashville with a couple of mystery women, the Vanderpump Rules cast member and their seven-month-old daughter, Ocean Kent Emmett, have allegedly relocated from her and Randall’s Bel Air home to the famed hotel in Los Angeles.

Over the weekend, as a series of photos and videos of a man believed to be Randall began to circulate on social media, Lala deleted all photos of him from her Instagram page. She also shared a video that included Beyoncé’s “Sorry,” which features lyrics such as, “Now you want to say you’re sorry… Now you want to call me crying… Now you gotta see me wilding… Now I’m the one that’s lying… And I don’t feel bad about it… It’s exactly what you get.”

As Pump Rules fans may have seen, the man thought to be Randall was seen walking around in Nashville with two women before entering the Thompson Hotel.

E! News also confirmed the news of Lala and Randall’s split, with a source telling the outlet that Lala’s main focus is on her daughter Ocean, who “is her whole world.”

Lala and Randall had been engaged since September 2018 and were planning to tie the knot in 2022 after being forced to postpone their initial plans to wed in April 2020.

While Lala and Randall have remained mum on their alleged split, Lala did “like” a very telling post on October 18, which came from Your Moms Are Watching on Instagram and suggested that many of Lala’s fans and followers are furious at the thought of Randall cheating.

“All of us if Rand cheated on Lala,” a message read, along with a photo of Lisa Rinna holding a gun at a photo of Randall. 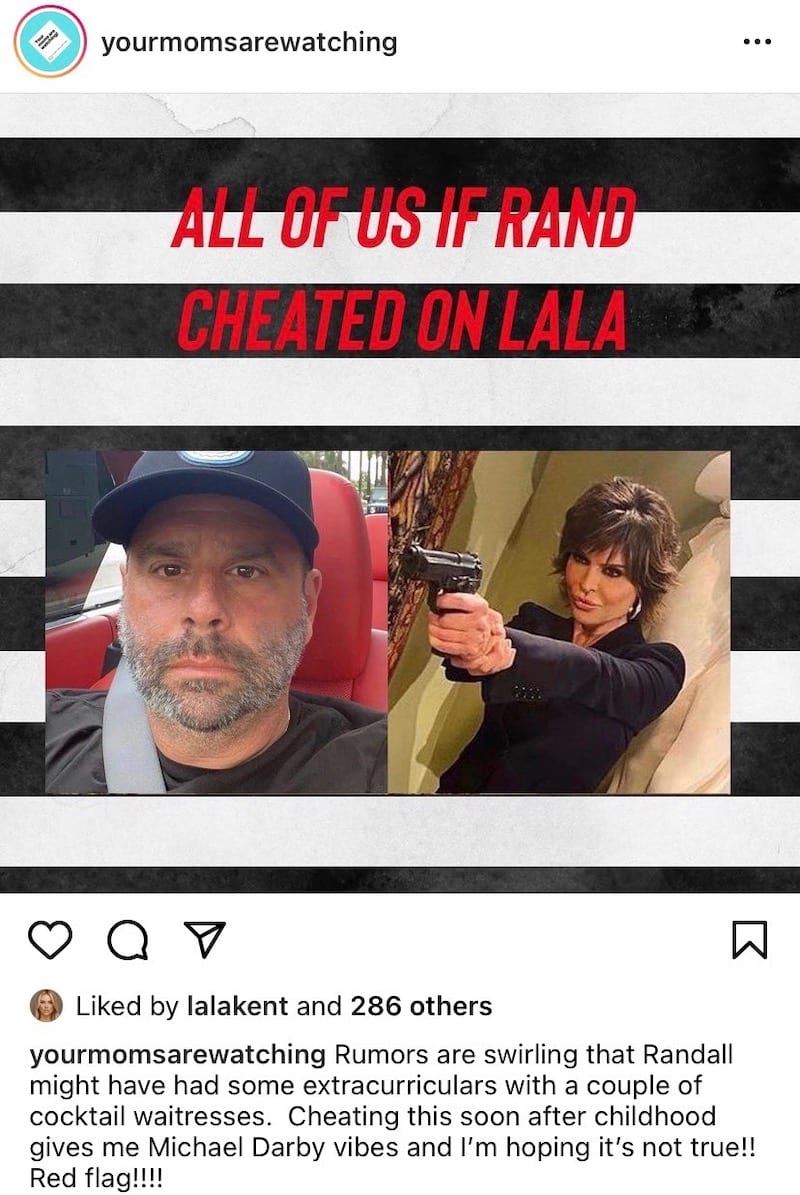 Prior to Lala, Randall was married to actress Ambyr Childers, with whom he shares two older daughters.

Although Lala has insisted that her relationship with Randall began after his and Ambyr’s split, Ambyr has suggested otherwise, even slamming Lala as a “mistress” in a post shared to her Instagram page years ago.