Home Real Housewives of Potomac News Nicki Minaj and Chris Bassett Feud on Twitter After RHOP Reunion as She Blasts Him, Plus She Shades Wendy and Shares Who Came Up With Questions as Candiace Speaks

Nicki Minaj and Chris Bassett Feud on Twitter After RHOP Reunion as She Blasts Him, Plus She Shades Wendy and Shares Who Came Up With Questions as Candiace Speaks 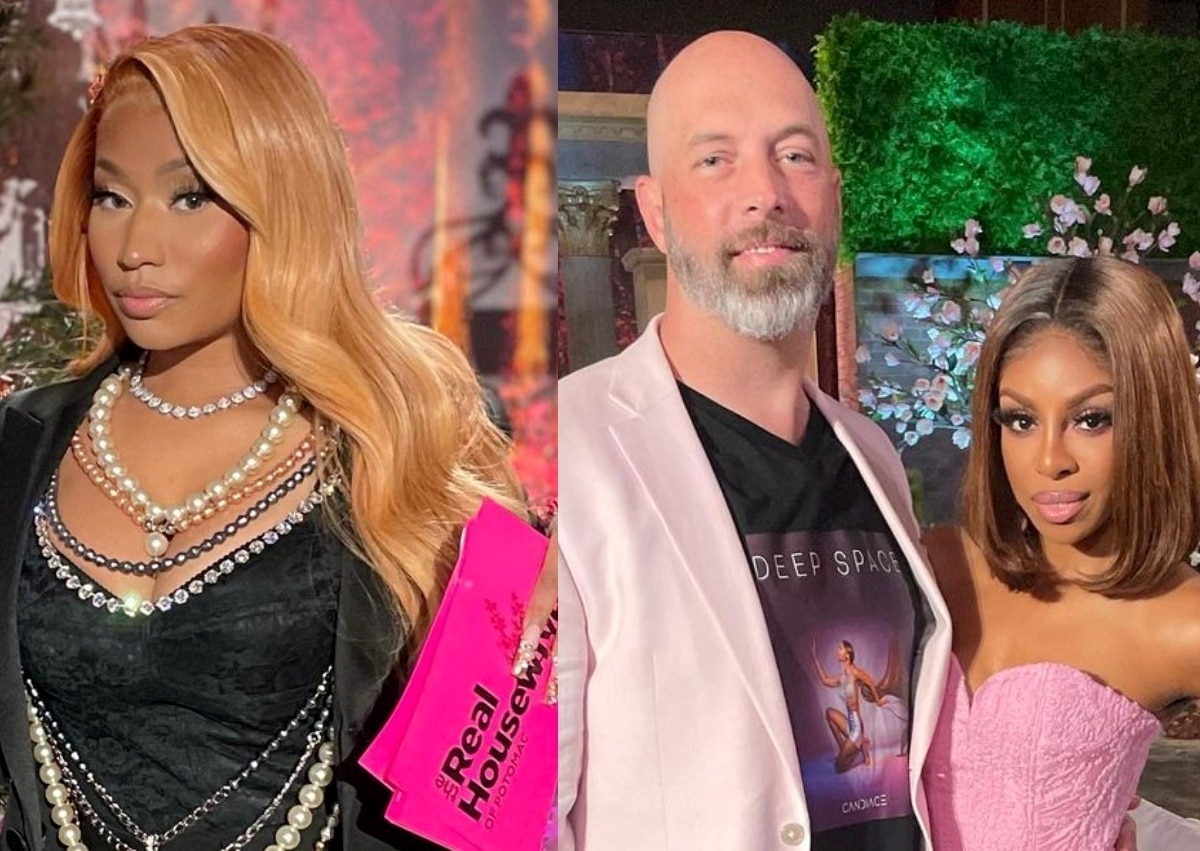 There is no doubt in The Real Housewives of Potomac fans’ minds that Nicki Minaj stole the show at the fourth installment of the season reunion, especially after having Candiace Dillard Bassett sing for her.

The ladies of the Potomac didn’t come to play this reunion season. Already, Wendy Osefo showed up with large in size but still disappointing receipts, Karen Huger made up with Gizelle Bryant, and once again, Candiace found herself in the hot seat due to her bad attitude. But the biggest surprise of all was when the “Moment 4 Life” singer strolled onto the Bravo stage to grill each and every one of the women.

It seems that Nicki’s intense interrogation did not sit well with everyone, including one of the husbands, Chris Bassett. The feud heated up on Twitter after Nicki continued to share her opinion on Candiace’s singing career. At first, the rapper tweeted about some behind-the-scenes questions, writing, “I forgot to tell you guys, all of the questions were mine with the exception of 2. The Eddie/booty model question & if Giselle/Robyn shared a bed in the hotel question were courtesy of the producer phone call I did w/Bravo.”

According to Nicki, she “loved the producers, our calls were hilarious.”

During the planned commercial break, Chris, acting as the dutiful husbanger, came out in a huff to confront Nicki. Fans learned he was agitated that the 10-time Grammy-nominated musician pressured his wife to sing. Even though Andy Cohen intervened on Candiace’s part, Chris was not satiated.

One of Nicki’s tweets read, “Candy gurl husband rlly need to sit his ass down chi LMFAO.” Chris then replied, “I don’t need to do nothing but support my wife.”

The chef then took a jab at the show itself when he replied to a fan insisting the show was “low budget at its FINEST. They just don’t know.”

Candiace also took to her social media to fire back but not at Nicki. The aspiring singer took aim at Mia Thornton, writing, “‘You’re an artist. Sing!’ Lol. You’re a heaux, but we don’t ask you to — Nevermind.”

Chris was not the only cast member called out by the “Starships” singer. Nicki also felt very confident in blasting Wendy for sneaking a peek at her cards. The ultimate RHOP guest host slammed the professor, writing, “Ok so while we on commercial— it was BEYOND CORNY for Wendy to look @ my cards on the low. I’m that chick that leaves my money, jewelry, etc out around ppl cuz I just trust everyone is like me & won’t violate. I HATE when ppl do sneaky tingz like that chi.”

Bravo viewers seemed to love Nicki as a guest host. One follower wrote, “You really dove into RHOP and did the research, remained diligent in making the most out of the experience for the viewers and fans who tune in to the show, didn’t play it safe in any regard and it paid off.” Most viewers agreed that Candiace should always be ready to sing at the drop of a hat.

Like all good reunions, this one had to come to an end. Even though there may have been some animosity between the guest host and cast, the rapper made sure to leave on a positive note, thanking Andy and his team for the chance to “kiki” with the girls.