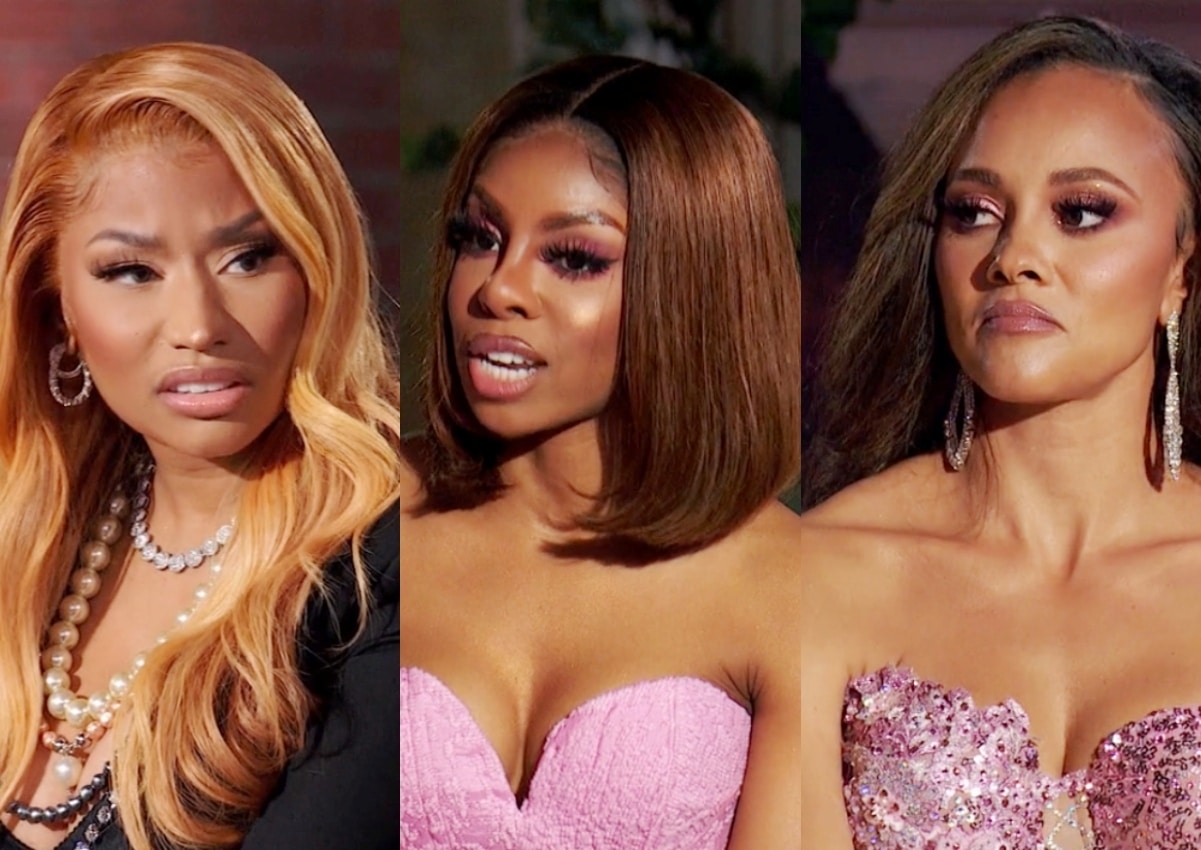 Let’s break down the final episode of the Real Housewives of Potomac and try to end this season on a high note — literally. Nicki has her shady questions prepared for these ladies, and she is ready to draw some reality blood. Let us watch and see if all the hype for this episode has any meat to it, shall we?

Nicki Minaj is suggesting that Ashley, aka the breast milk lugger, needed to be Gizelle’s sidekick to remain on the show. Ashley insists she has been playing this game for six years and knows what is expected of her. She has a family that is a ready-made storyline. Nicki thinks that Ashley came on the cast trip to just stir the pot, which is an easy deduction to make. Ashley believes in saying to someone’s face what she is willing to say behind their back.

Wendy then pipes up and says she does not think that Ashley was being malicious, but Ms. Minaj is not buying that. Nicki thinks Ashley should have just stayed home with her kids. Candiace tries to interrupt, and Nicki tells “Candy Girl” to take a seat. Nicki is taking her side gig seriously and is not allowing anyone to take her moment. Shocker, Candiace was defending Ashley by saying she has contractual obligations and needs to work. More surprising is that Wendy shoots Candiace the stink eye and tells her to stay out of this. I think these two have formed an alliance before the reunion and have formed a protective barrier around each other.

Nicki tells Robyn that she loves her vibe, and she sees more sexual chemistry between her and Juan. What, are you kidding me? Juan has barely filmed this season, and when he does, he could not be less interested if he tried. Robyn pathetically gushes that Juan finds her sexier after seeing her on TV. Nicki calls Robyn out on being Gizelle’s loyal soldier. She has correctly determined that Robyn looks to Gizelle for her directions. Nicki finds it suspect when Robyn wants to know how “we” are feeling over the Wendy drama. She then pivots a tad and does not understand why Wendy was so upset over Gizelle sharing info when Ashley was a sniper from the side.

Nicki decides to inquire if Gizelle and Robyn are secret lovers. She is into Robyn clearly, and I would not take that as a compliment. Robyn would sleep with Nicki if given the chance. Nicki is loving her ability to extract intel and sees it as squeezing good juice.

Nicki then asks Robyn if Michael is attracted to Juan. She thinks he is no doubt, and that is a question that did not need to be answered on the reunion couch. Nicki wants to know if Robyn is concerned about this since Juan may decide to partake at some point . According to Robyn, Juan is not interested in Michael sucking his d*ck. She thinks Juan does not want to give it any attention. Ashley then insists that Michael is not gay when Nicki suggests it.

Nicki declares that Karen is a shady b*tch when she tries to interject some comments into the conversation. Side note: I am so distracted by Wendy’s exaggerated facial expressions while Nicki is asking questions. Mia is being quiet during this segment, which I find interesting. She seems reluctant to engage in this line of questioning from Nicki.

Nicki commends Gizelle on how she interacts with her daughters. She wants to know if Gizelle’s beauty is “fading” and are the men still crossing the street for her? Nicki is really going for Gizelle’s jugular by suggesting she is losing her best feature. She should not throw stones, especially having the moon face look she is sporting.

Nicki starts shading Gizelle on her age digs at Karen. Robyn thinks Karen looks younger now than she did in the beginning. Nicki calls her out for picking now to give Jamal a second chance when she is on TV. Gizelle shares that the church that Jamal started out with 40 people has now grown into 15,000 people. She takes credit for being there and helping to make the church successful.

Nicki questions Karen on calling Gizelle’s box hot. Karen admits that she was just fighting fire with fire. Nicki thinks that Karen and Ray have a freaky sex life and are all good now. The whole tea-bagging and tossing the salad conversation is brought up but gets glossed over.

Mia is now on the hot seat, and Nicki likes how she made amends with her mom. Nicki thinks that Mia and her mom need a lot of healing. She wants to know if the surgery has improved her climax. Mia chats about the women she picks out at the strip clubs to bring home with her and Gordon. She does acknowledge that men are not allowed to be added to their throuple.

Nicki wants to know if Karen, Mia, and Ashley would have married their husbands if they themselves had one hundred million in the bank. Ashley tries to defend that she finds Michael attractive. Karen would still want Ray since he moved her soul. Mia acts like G would still be someone she would marry if she was the wealthy one. Is she trying to suggest that she would have been attracted to the shoeless drunk man wandering around the strip club?

Mia gets called out on saying a strip club is not one when you serve steak and lobster. She thinks when you throw out chicken wings it is a strip club. Nicki questions Mia about Eddie not looking her in the eye. Mia thinks that Eddie was attracted to her during the couples’ game but was terrified of Wendy’s wrath. Nicki finds Wendy’s reaction to be very insecure. Wendy and Mia go at it over Mia liking the power she has as a stripper when husbands hit on her.

Nicki questions Wendy on her candle business, and like us, she does not understand the career shift. She then goes in for the meat of this story and brings up her beloved. Eddie was following a bunch of booty models on Instagram and production shows screenshots. He unfollowed them when the blogs were reporting about it. Wendy acts all nonplussed over this, but you can see she is seething over the suggestion that Eddie would find another woman attractive over her. Nicki thinks Wendy is too controlling to allow this to happen.

Nicki then goes in on Wendy about her body makeover. She inquires if she was noticing her husband’s wandering eye and needed to plump up her assets. Wendy claims it would not bother her in the slightest if all Eddie were doing was looking.

Nicki then pivots to Candiace and thinks Dorothy is willing to destroy Chris with her words. Candiace needs that “cryangle” and refuses to disrespect her mom on national television, but Chris is fair game! She says she put her in time out for weeks.

Nicki tells Candiace that she likes the song “Drive Back,” but she wants to know if everyone thought it would go platinum. There are crickets when this is asked. Karen at first gives it high ratings, but then when pressed, she reluctantly gives it a five.

Candiace is hesitant to belt out a tune. She initially refuses to sing “Drive Back,” and then when pressured, she breaks out into tune. Candiace does an admirable job, which everyone admits. They decide to take a quick break. Chris comes out stomping his feet and doing his best Eminem impersonation. He is pissed that they put his meal ticket Candiace on the spot. Andy runs out and tells Chris how she nailed it and to not be upset over Nicki pushing her to sing.

Nicki then thanks all of them for participating and behaving like the queens they are. She then also toasts to Andy-Conda, and we have a wrap!

Phew, thank goodness this is over! I thought Nicki was going to be more aggressive than she was, but she must have controlled herself this time. Thank you, Blurbers, for being with me all season, and I hope you all have a fabulous holiday season!