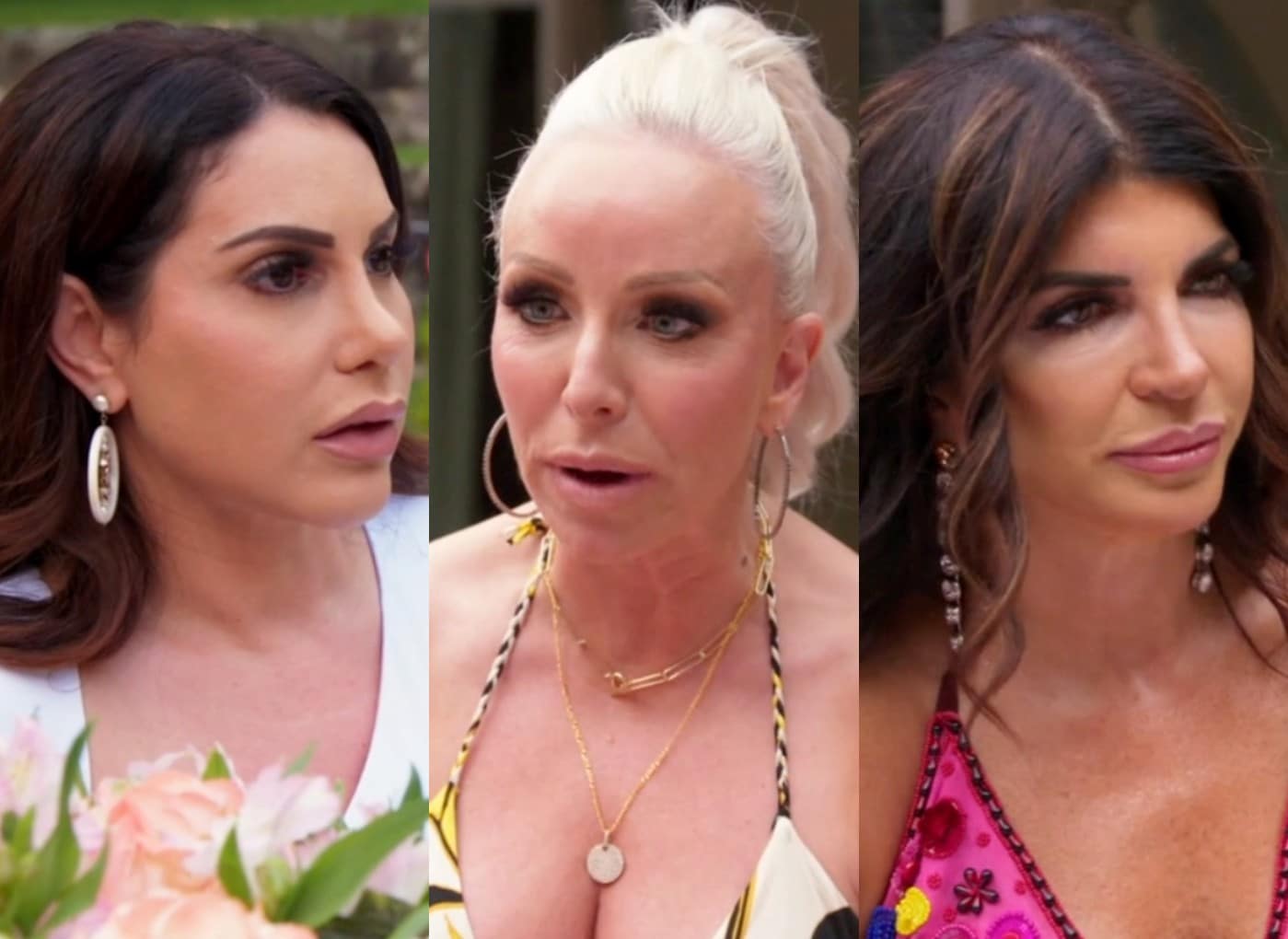 Our preview for the Real Housewives of New Jersey season 12 looks JUICY and scandalous. The first episode of the season is titled “Smoke, Mirrors and Foggy Diamonds.” Let us catch up with our Jersey wives and find out the answer to the very important question of whose diamond is foggy, shall we???

We first hear the song “Cruel Summer” by Bananarama playing eerily in the background. We get glimpses of season 12 showing where Jennifer is dealing with infidelity rumors. We have Jackie losing her sh*t — again. Melting Marge with the sagging appendages seems to be gunning for Louie and trying to break up his relationship with Teresa. Melissa again has no storyline, except maybe some staged catfight at some point. Tiki Barber’s wife Traci is added to the mix, which I am super excited about. #teamtiki

We first catch up with Teresa, the self-proclaimed GOAT, and see what is up in the Giudice household. Teresa has finally sold her home monstrosity of epic proportions and will be moving into a home with Louie and his sons. She needs to stop laying by her pool when she has his boys living there since some things you just cannot unsee. Louie needs to sit them down and explain not everyone has a forehead and a brain. I am distracted now by how much the Giudice girls have all grown up, and it is nice to see and hear my favorite, Gabriella, speak. Teresa thinks Louie is great since he is willing to allow her to be the GOAT and step aside since she is in the public eye, you know. She does not even know what it stands for and must think she is the kind with horns.

Gia tries to get Teresa, aka blockhead, to see that it is moving a little too quickly after only being together one year. She still has better sense than her mom, and she recognizes that it might be too soon to put all your eggs in one basket. Gia is still upset with her uncle Joe over what he had said about Joe Giudice. Milania is perturbed that he has only tried to make amends with them by text. Side note: I agree this conversation needs to be had in person, but Joe Gorga should not have to apologize for what he said, which was pretty much true. He needs to acknowledge the fact that he hurt his nieces with his comments about their dad and learn to keep his little mouth shut in the future.

Dolores is still going through a home renovation project after nine months. She now has her two kids living at home with her, which makes her incredibly happy. Gabby is now a veterinarian, so kudos to her and this great accomplishment. Frankie Jr. is working for Louie, and he thinks he is a good guy. He is so good-looking that I will forgive anything he says even if I do not agree with it. Dolores has had to rent a townhouse since she did not want to shack up with David without a commitment. Frank Sr. has a little young (does not have to wear a life preserver on his boat) vixen, who is occupying his time, so he has put the reno project on the back burner. He does find time, however, to participate in the Jersey guys’ comedy show in Atlantic City. #priorities

Margaret is still melting and pooling, so nothing new there. She mentions the video that Luis made, which is a BIZARRE video with half-naked men begging his ex to return to him. Louie allegedly created this to apologize to another woman with a group of men who go to some sort of “warrior camp” with him. Joe B. is still weighing in on the ladies’ side drama, so he has not learned to stay out of their petty drama. Margaret thinks that Teresa will somehow find a way to romanticize the making of this video. Teresa can always find a way to create her own narrative even though she cannot spell the word narrative.

Jackie now comes over to gossip with Marge. She is looking forward to Teresa’s pool party since they are finally on good terms. Jackie is not going to rock the boat with Teresa. She thinks Jennifer and Dolores should be the ones to intervene and talk to Teresa about Louie’s video. Jennifer must be having rich girl problems since she has been blowing up social media attacking the other ladies. She called Joe and Melissa crooks and Marge a snake in the grass. Jackie and Marge think things might not be so good in the Aydin household. I must agree with their assertion.

Melissa and Joe head out to dinner to meet up with Tiki Barber (love him!) and his wife, Traci. Melissa and Joe are building a new home and are currently living in a rental. How often do these two vagabonds move for goodness’ sake? The topic of Teresa is mentioned and even Tiki senses there is more to the Louie story. Joe thinks that Teresa is fooled by Louie’s knight in shining armor shtick. Traci is not willing to jump to any conclusions since she had to deal with rumors when she and Tiki first got together. Tiki and Joe have some sort of bromance and refer to each other as B-Fam (brothers from another mother).

Jennifer is having dinner with her family. She just got a nose job and had her chin implant removed. She is still wearing the bandage even though Dr. Bill thinks it should be healed. Jennifer went to Turkey and had the surgery instead of letting Bill put up with her during surgery do it. She recently made amends with her mom, which is good, and Dad still lives with them. Jennifer shares with Bill that Melissa went after her on social media, but production shows otherwise. She has been friendly with Teresa and Luis but has not been hanging out with the others.

Joe gets called out by Teresa on the phone about mocking Luis during his comedy show. He thinks he needs to stay away since his nieces are upset with him over his comments. Joe is not going to go to the pool party since everyone is peeved at him.

We have now arrived at Teresa’s pineapple-infused pool party. Margaret tells Teresa that Luis should explain the video to everyone. I do not agree he needs to explain to everyone, BUT if he explained it to Teresa do you honestly think she could comprehend what he was saying? We could get a teacher who can use flashcards and Hooked on Phonics to try and penetrate that brain. Teresa wants everyone to just show her and Luis respect in her own home. She is not going to entertain any negative comments about her precious Louie.

Marge and Joe B. are chatting about Jennifer talking smack about her and calling her the snake in the grass. She definitely is trying to be the HBIC again this season. Joe Gorga decided to go to the party after Teresa called and apologized to him. Jackie would rather be friends with Teresa than deal with her wrath. She knows how Teresa can attack what she feels to be a threat to her position on this show.

Teresa calls Louie to find out when he is coming over. He claims to be stressed out over the video and hanging out with this crew. Dolores asks Teresa if she is upset over the men’s show where her brother claimed to like Joe G. better than Louie. Teresa thinks that it was sweet that Joe Gorga would rather have Joe Giudice for a brother-in-law than Luis. She is just trying to appease her girls, and Dolores in her ITM knows she is walking a fine line to keep the peace in her family.

Jennifer and Bill walk in while everyone is talking about her. Jackie and Marge think that Jen’s nose looks terrible. Me too. Jennifer talks to Teresa about the others ignoring her. She wants to know why even Jackie is upset with her, so Teresa grabs her to chat. Jackie tells Jen that she is loyal to Marge and has her back. Jennifer starts to cry since she feels like she is an outsider. Margaret approaches Jennifer and wants to know why she calls her the snake in the group. She thinks that Jennifer is not being honest and is unhappy. Margaret blurts out that everyone knows she is upset over her husband Bill’s affair. Please say it is not so that my beloved Bill had an affair with a pharmaceutical rep!!! Yikes, we ended this episode with a humdinger!

Next week, we hear more about what is going on with Bill and Jennifer’s marriage. Teresa and Louie’s relationship will continue to be scrutinized. I am so happy RHONJ is back, and I hope you all are doing well!