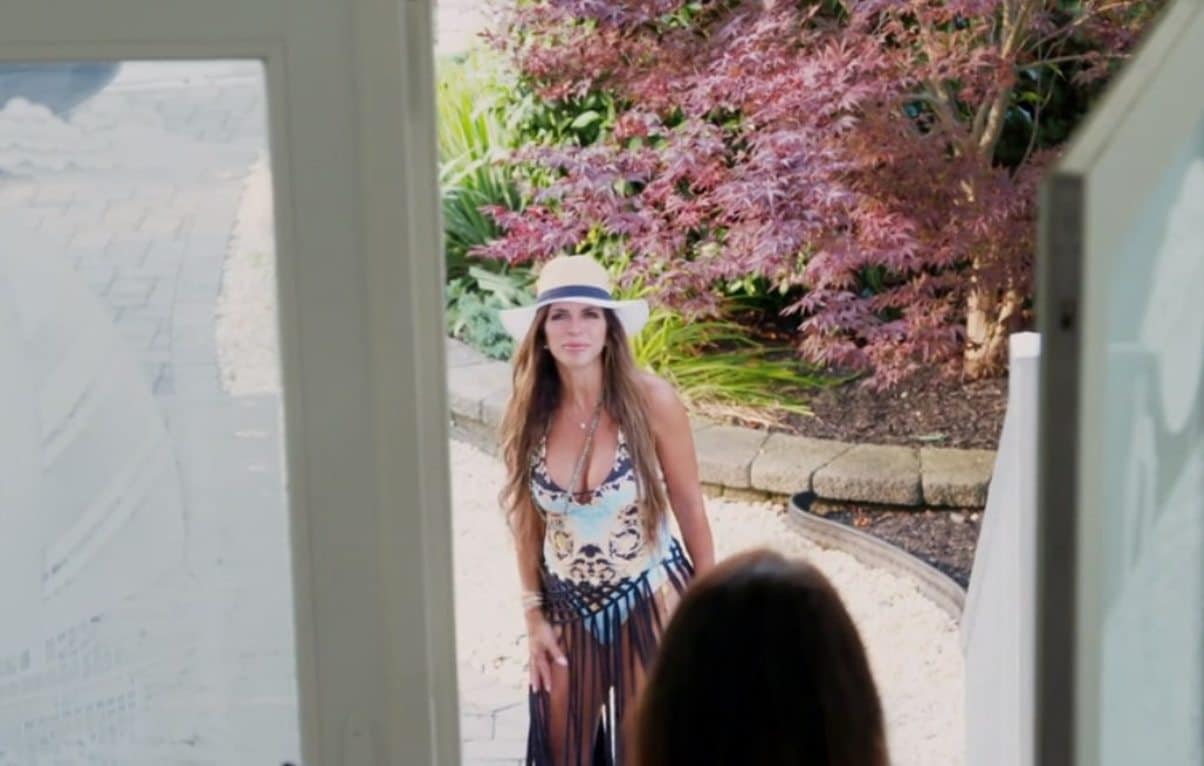 We are back for more Real Housewives of New Jersey to see what happens with Dolores and Jackie as they continue to chest bump each other. Will someone break these two up before their implants rupture? Let us watch and see the fallout — figuratively speaking — shall we?

Frank Sr. puts the Paterson dumpster fire out but lets us know that you do not mess with his ex — she bit through two nails on a chick who pissed her off in Paterson. Jackie is not backing down from Dolores, but she might want to consider wearing some heavy-duty gloves next time to protect her manicure.

Marge and Jennifer continue to discuss their tiff. Jennifer acknowledges that it has been a trigger for her when Marge would brag about her affair with Joe. Good admission, Jennifer, we will have some resolution to an event that happened 10 freaking years ago! Jennifer discusses how she was afraid her in-laws would blame her for the affair. She claims that they will shift the blame to her and think she does not satisfy him. That is some bullsh*t if you ask me.

Dolores, who is extremely red and resembles the Heat Miser from the Xmas movie, is still trying to calm down. She and Jackie try to talk it out, but it does not appear they are able to reach any common ground.

Melissa decides to grab the attention away and invites the crew to her shore home, which she has coined Missy G’s. She somehow thinks this is a clever idea after this altercation. Melissa, my delusional darling, giving this crew alcohol and then allowing them to cook in the sun is not a recipe for resolution. My attention is then diverted away to Traci, who is doing a keg stand. Traci is trying to get as much camera time as she can so she will not be a one-season wonder.

Jackie has a counseling appointment with Renfrew. She tells the counselor that her children have been noticing her eating habits. Jackie shares what led her to this eating disorder, and it was from a time when some guy in college said he wanted a girlfriend who he could lift with a pinky. Sinc then, she has been on a mission to count her calories and micromanage her weight. Jackie admits that she has issues with being cold all the time, and she gets lightheaded. The counselor wants Jackie to have a complete medical checkup because she is concerned if Jackie were to radically change her diet it could result in a serious medical episode. That is some scary sh*t, and Jackie went to the right place to start working on this disorder.

Dolores has now called a family meeting to discuss the house rules since most of her family, except her, will be cohabitating under the same roof. She wants Frank Sr. to behave himself and try to maintain some sort of decorum while FINALLY living under the same roof as his kids. Gabby wants her dad to be respectful and not bring his adult visitors, aka hoes, home. Frank Sr., who is starting to resemble Dolores with his fire-engine red face, very inappropriately asks his kids if their boyfriend/girlfriends have sex under the same roof.

Gabby then breaks it to her dad that she and her boyfriend do not engage in activities that can be heard from three floors away. Frank Sr. then very salaciously says, “Well, maybe your boyfriend doesn’t sexually satisfy you!” If I were at that dinner with my dad, I would have spit out my food at that comment. Dolores must try to maintain some decorum at this dysfunctional family dinner/meeting, and she hits Frank in the head with the menu. Is she trying to knock the skeeve out of him?

Dolores decides to break it to her kids that she and David are not seeing each other. She thinks they grew apart and always wanted different things. Dolores reluctantly admits she had to part ways even though she is still in love with him. Frankie Jr. thought Dolores and David would have married one day. He does have questionable judgment when it comes to suitable men for his mom and Teresa. Remember that he is a fan of Louie too? Dolores feels terrible that the relationship is over since her kids had liked him. She admits he got closer to her kids than he was to her.

Jackie and Evan talk about her eating disorder, and she is concerned she has caused herself grave damage. She is worried that she is going to spend her entire weekend counting every calorie she ingests. Evan is genuinely concerned that his wife’s eating disorder may have caused some permanent damage.

Jennifer and Bill talk about how she made some progress with Marge. She tells Bill that Dolores is not being loyal to her. We are seeing some shifts in these frenemy alliances now.

We have now arrived at Melissa and Joe’s shore house. Melissa is putting Tito’s in the water bottle cooler. Traci arrives without Tiki, and she gets the first gulp of vodka. Marge and Jackie talk about Louie, and they think he is a weirdo. Excuse me, did she just say that someone wants Louie dead? Marge believes that he is constantly doing damage control as his creepy skeletons are coming out of his closet.

Melissa greets Marge and Jackie like she has not seen them in ages. She screeches when she looks under Marge’s dress and a bat flew out and she sees that she is not wearing any underwear. First of all, what friend does a panty check at the door when you arrive at their home?

Teresa and Louie are staying at Jennifer’s rented shore house. Jennifer tells Teresa that Jackie has been a supportive friend, but Dolores has not been there for her. Teresa wants Jennifer to have the BBQ with the group at her house . Jennifer wants everyone to avoid the pool this time.

The gang decides to go to the beach and get together — minus Louie, who is allegedly still driving there. Dolores reminiscences about her time on the shore when she was the good girl biting off appendages and Teresa was the fist-pumping party girl. Melissa announces that she has been drinking since 10 a.m. She wants to fondle anybody who is interested and has come close to finger-banging Dolores in the past. Joe G. is still getting questioned about having sex with Dolores in the past. Maybe they both have partaken in banging Dolores since she knows a lot about the size of Joe’s little peen?

Dolores chats with the ladies about her breakup with David. Teresa is in another world texting on her phone, and she looks up when Dolores tells her she broke up with David. She acts completely uninterested in hearing this news. We now know that these two alleged ride-or-die friends are no longer besties.

Dolores cannot believe that Jennifer feels a closeness to Jackie when her BFF is Marge. Jennifer can now understand why Dolores was so combative with Jackie. Dolores decides to tell Jennifer that Jackie said something disgusting about Bill. Jackie said, “I don’t care, he should not have stuck his d*ck in someone else.” Jennifer finds that comment totally disgusting. Dolores encourages Jennifer to keep her eyes open when it comes to Jackie.

Louie calls Teresa and tells her to escape the cameras. He wants her to remove her mic so he can talk to her. Melissa then gets a text from Teresa telling everyone to keep their yappers’ shut about Louie. Fourth wall down, the producer tells Teresa that she has been talking to Louie in the parking lot and he wants no part of this scene. Teresa tells the producer to go f*ck herself since they are allowing the other ladies to sabotage her relationship on camera. Little Louie did not sign up for this show, but dear Teresa, you did, and you are earning a buttload of cash for it. Teresa tells the Bravo cameras, “You are the devil!” Then, she drives away in her pinkish-toned Land Rover. We get ANOTHER to-be-continued without a clip from next week to see what happens!

Side note: How does Teresa get away with this behavior and refusing to film when others have been fired for not sharing their lives? Louie knew who he was dating, and he obviously wanted to capitalize on it. He was arrogant enough to believe that his past would not be exposed and he could charm his way out of it. Did he think everyone was a dullard like Teresa? I hope everyone is having a good week so far, and see you next week for the continuation of RHONJ!