RHOM Finale Recap: Larsa Calls Adriana an “Alcoholic” and Adriana Slams Her as a “Mean Girl,” Plus Alexia Loses Mom on Wedding day 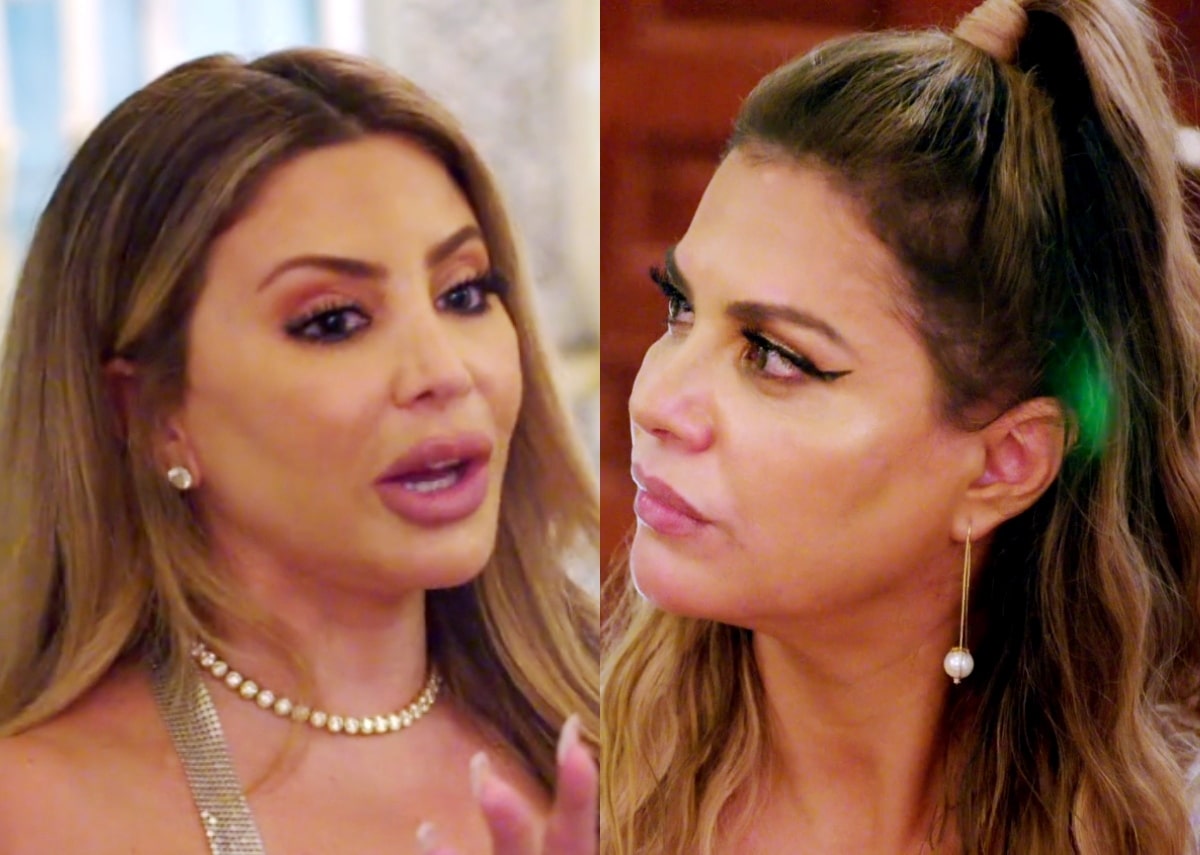 The title of this episode is “No Wedding and a Funeral,” which is an incredibly sad way to end this season. Let us watch this emotional finale episode of the Real Housewives of Miami and see how Alexia has basically carried this season, shall we?

We are back to the b*tch fight between Adriana and Larsa. She thinks that Larsa has always had an attitude of being above everyone else and hits below the belt. Larsa thinks that Adriana is trying to bait her by mentioning the Kardashians.

Alexia would rather talk about the drug dealers she dated in the ’80s, and we would love to hear about THAT story instead of this nonsensical drivel! Larsa announces to the table that her stock has just risen, and Adriana’s value has plummeted. She says to Adriana, “Sorry you’re tacky, sorry you’re bipolar, you must have bad vision as you get older because you dress like a clown.” Larsa has finally shown her true feelings and makes a grand exit in her nice car and goes home to her big house.

Marysol is just trying to throw a nice bachelorette party for Alexia, but everyone is talking about a*s and that is asinine. Nicole decides to hit the road since she must work in the morning. Alexia does not want anyone to pull this sh*t at her wedding. Marysol and Jonny have a fun night planned with some hot men and inserting penis doughnuts into their mouths. Lisa decides to give Alexia a lap dance and liven things up. Adriana thinks the stripper is lame. Jonny must remind Adriana, “Please, he has feelings, he is a human.”

They decide to play kick the dick and some dirty dancing with guys in gold hot pants. The guys are making it rain with champagne. Lisa decides she is finally going to admit she is hungry at 4 a.m. She thinks she should drink less since she forgets to eat.

Adriana and Julia wake up in the morning with their makeup smeared all over their white pillowcases. Gianni must be rolling in his designer grave! Adriana thinks Larsa is a mean-spirited person. Marysol and Alexia are in their room making sure Alexia knows how “hot she is,” and she concurs.

They have a gorgeous table set for the bachelorette brunch by the pool. Marysol shares that the China was given to her by her mom 15 years ago and this is the first time she has used it. They get served caviar by a hot-looking man named Caviar Guy. He even feeds Kiki some, and she looks like she is going to orgasm upon eating it. Larsa decides to return and grace them with her presence. She is wearing something that at least covers more than she used to. Adriana snarkily sees Larsa as Cousin It with her ridiculously long extensions.

Larsa decides to pretend Adriana does not exist and tries to find out why Julia feels the way she does. She is even willing to give her a lap dance if that would be effective since it has gotten her this far! Julia thinks that Larsa is only interested in people who have a lot of followers and interesting content. Larsa clearly recognizes Julia’s bias because Adriana is her friend, and she wants her to stay in her own lane. She does not want to cry and ruin her makeup.

Adriana tells Larsa that somehow a stick has been shoved up her a*s. Alexia has had enough, and Adriana has finally gone too far with that comment. Larsa snottily remarks that Adriana resents her because she is winning. Adriana, who is now livid, shouts out that she speaks five languages and goes to, ahem — Harvard? In her ITM, Alexia hilariously asks the producer if Adriana is behind her because she will lose her sh*t if she hears her comments on this scene. She also states that she is not afraid of the five-foot-tall woman.

Adriana announces, “Larsa is hanging out with Malik who is married and has a kid.” She is no longer hungry since Larsa ruined her breakfast. Larsa gives one of those HW bullsh*t apologies of, “I am sorry you feel that way.” Marysol finally intervenes, and she is so hungover she toasts happy birthday instead of best wishes for Alexia’s wedding.

Martina is outside at the farm, and Julia, who is dressed in a gown, strolls in walking a goat. I know this area they are in, and people have all kinds of animals out there. Julia wants Elvis the goat to move into their house, but it is against the Miami Beach bylaws. They are cute together with their flirtations, and Martina wants to know what is on the menu for later. Julia is on the menu and Martina is looking forward to the entree.

It is now two days before Alexia and Todd’s wedding and they are drinking champagne. Did you see those electric kitchen cabinets Alexia just tapped to open? Todd’s mother and brother come over to dinner. Alexia’s building has a full restaurant, so they have chefs just wheel in their dinner on their private elevator.

Lisa and Lenny are having a glass of wine. She whines that she does have responsibilities too since she manages the home and the medspa. Lenny puts their big dog, Jax, on the bed, so there will be no sexy time in the Hochstein household. He wants to have another baby and you can see Lisa’s trepidation. Lisa does not think he is around enough and cannot help with the two they have. Lenny wants her to consider IVF, but Lisa is reluctant over how it makes her feel bloated and fat. Lisa would prefer Jax to be her third baby.

Larsa and her sister Arbella are chatting about her divorce. She is sad that they will be leaving their home after 20 years. Larsa cannot understand how people can just so easily move on after divorce. She gets the email that Scottie signed the divorce papers. Side note: I do not know how I feel about that style where you wear a big shirt that is falling off you over what looks like a surgical bra.

Nicole calls Marysol to see if she heard about Alexia’s mom, Nancy. Jonny shared that Nancy is now in hospice and they are trying to make her comfortable. Nicole wants to do something for Alexia, and she plans a little party to show some solidarity to Alexia.

Guerdy gets a message that Alexia’s mom died. She must cancel all the wedding plans for her. Guerdy gets upset and thinks that Alexia just cannot catch a break. Russell is so sweet as he consoles Guerdy and acts supportive.

Nicole plans a beautiful spread for Alexia. Marysol thanks Nicole for taking the lead and doing something nice for Alexia. Nicole and Marysol decide to toast to new beginnings. Lisa comes in wearing a bright green dress, and she immediately recognizes that she got her color palettes all mixed up!

Lisa reads a heartbreaking post written by Alexia. Here is an excerpt of her Instagram post: Nancy passed away from “the horrible and deadly COVID-19” on her wedding day. “The last couple of days have been a rollercoaster of emotions for me. I was on the road to marry the man of my dreams when I had to stop everything as my mother became ill. What was supposed to be the happiest day of my life today has turned out to be the saddest.”

The ladies all put candles in a bag and let them float to honor Nancy’s memory. All the ladies offer up blessings for Nancy and Alexia. Kiki’s comments are beautiful and extremely heartfelt. Julia is reminded of her baby son and breaks down. Adriana and Larsa even manage to hold hands through the prayer without throwing each other in the pool.

We are now at Alexia’s home, and they are headed to the funeral. Mama Elsa and Herman were buried at the same cemetery where Nancy will be buried. Larsa, who jetted off to LA, and Nicole, who had to work, were not able to attend. Alexia reflects on her beautiful mom. The clip of Nancy explaining that men have a castration complex is just priceless. Alexia proudly acknowledges that Nancy was a cougar before they were even a thing.

The ladies all comfort Alexia, who is relieved that her mom did not suffer. She thinks Nancy was able to let go since Alexia had Todd in her life and her kids were good. We now get the season-ending notes…

Four months later, Alexia and Todd decide to get married in St. Barts. Alexia got to marry her gringo, but then she had to deal with Peter being arrested for domestic violence. Some things will never change…

Guerdy was named one of the best wedding planners in Vogue.

Anthony ended up proposing to Nicole with a 10-carat diamond ring, and their gorgeous house was featured in Architectural Digest. The $40 million offer on their home fell through.

Lisa is not ready for more kids since she still is a kid at heart herself. She wants everything to still be all about her.

Larsa is single and ready to mingle. She bought a singles pad for $15 million in Miami Beach, and she and Scottie are doing bicoastal co-parenting.

Julia and Martina moved into their Miami Beach home and acquired another farmhouse. She also got to visit her girls in Paris.

Since Marysol, Adriana, and Kiki are not full-time, we do not get updates on them.

Next week, we get a glimpse of the reunion, and it looks like they all came out swinging. Lisa shares that Lenny is no longer in love with her. Larsa and Adriana are still bickering over nonsense. Did you all enjoy the glamour and beautiful excess of my hometown of Miami? This franchise knocks it out of the park with the gorgeous Miami Beach and the overabundance of wealth! Hopefully, Bravo will bring RHOM back next season! Take care, and have a wonderful weekend, Blurbers!