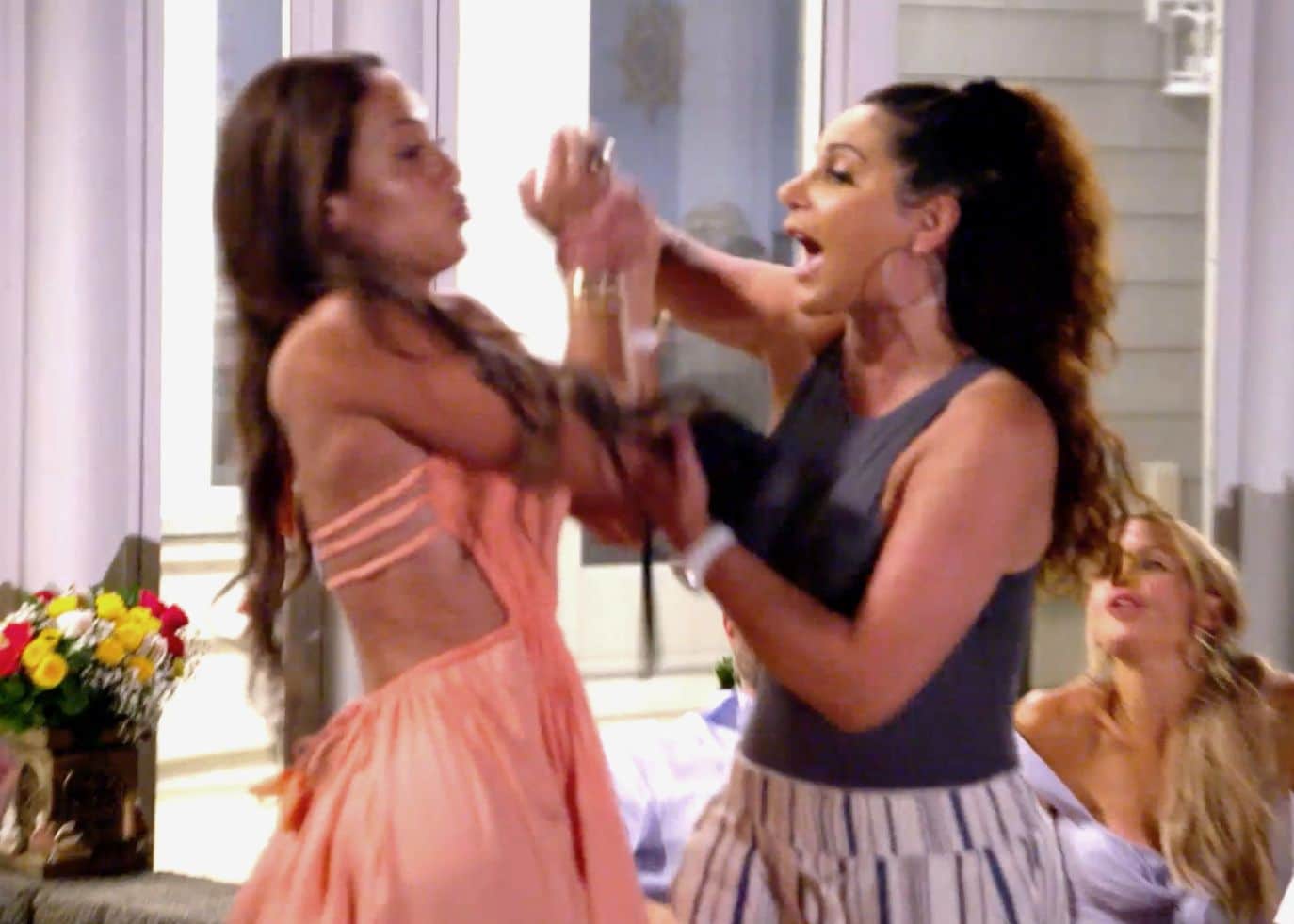 We are back with our Real Housewives of New Jersey for a Jersey Shore showdown. We have several different disputes going on, so let us deep dive into how this feisty group of “ladies” sprinkled in with some little b*tch girls resolve their differences, shall we?

We begin the episode with Jennifer calling Teresa to see why she flew the coop without explanation. Teresa does not answer the phone since she is begging Louie on her knees to return to film with her.

Frank, who is like a walking “lechasaurus,” thinks that Dolores looks like she is 25 years old and thinks all of her money was well spent. Jennifer tells Bill, who is probably driving in circles, about Teresa storming out following Louie. She must host the BBQ now because Teresa left her holding the BBQ utensils and ran after her man. Bill arrives to support his wife and offers to help. He will not, however, answer the door when he sees the Jersey crew at the door. Margaret assumes he feels awkward around them and especially her. She claims to have no issues with Bill, but she does take issue with Jennifer and how she chastises others.

Jennifer tells the group that Teresa stormed out over Louie. She defends Tre’s actions by saying she is trying to protect him. Margaret wants to be assured that the food did not leave with Tre since she is one of the few who likes to eat. Melissa cannot believe that she and Jennifer are actually sitting civilly and hanging out. Jennifer claims she was just teasing her and did not think she would get so upset. She then admits she had to retaliate after Missy G. went after her on Instagram. Production, of course, rolls the tape of Jennifer shading Melissa at every opportunity. I do agree with Jennifer that Melissa is self-absorbed and has never met a mirror she does not like. Melissa is probably fearful Envy will have to close its doors if there is a lack of sufficient funds from her husband.

We now see a van door opening, and Teresa and Louie load up. Teresa warns Louie that there are cameras in the van like she is an expert on surveillance. Louie wants to know why this is all coming out right now . Teresa thinks Margaret is ruthless and will not stop until she breaks them up. The silence is deafening when Teresa and Louie arrive. Traci, who is extremely parched, asks Melissa if they are going to address the elephant gorilla in the room. Margaret then asks Teresa why she left in a huff. Teresa, who seems fired up now, looks among the group and asks if anyone has anything to say.

Margaret tells Teresa that everyone is concerned about the video. Teresa really needs to apply some sunscreen to Louie’s face since it always looks like it is burnt to a crisp. Louie is happy to explain the video. Teresa will not allow him to answer when he tries to explain it. She is obviously more pissed that Margaret is talking smack behind her back than questioning the video.

Louis tells everyone to slow their roll and he will explain it. Teresa is furious that he is even answering this question. I now have my popcorn and wine to see if Louie can slap a muzzle on Teresa and please make her shrill-sounding voice stop. Louie, who looks like his panties are in a wad, is going to leave if Teresa will not stop interrupting him. Mr. Louie Suave is coming across like a controlling d*ck. He then tells everyone that Teresa will never learn when he tells her to shut her mouth and just use her two ears. Louie then puffs out his chest and informs Marge that no one intimidates him. Why did he run away earlier then?

Louie then provides a convoluted explanation for the video. He did not want to commit to a bad woman, and it was meant to be a break-up video. Louie had a thirsty ex who put that out to shame him. Margaret, in her ITM, saw it as a proposal video, and it sure did look like that. Teresa expects blind loyalty from everyone and wants everyone to stop talking behind their back.

Joe G. then confronts his sister about her so-called loyalty to them and being friends with Jennifer, who called him a crook. Melissa tells Teresa she needs to be loyal like she preaches. Margaret again gets called out about Jennifer and Bill. She thinks that Bill is the male non-melting version of her.

Melissa then pivots since the camera is not on her, and she confronts Jennifer about searching for dirt on Evan. Jackie is annoyed that this keeps coming up. Frank will not back Jennifer up when she tries to get him to admit to giving her info on the other lady. Tiki arrives during this sh*tshow and frankly looks terrified that he signed up for this crap. Melissa is resentful that Joe was called a crook. Jennifer also then calls Joe Gorga a little b*tch girl that gets involved in the ladies’ battles. She admits she wanted to hurt Melissa in a way that stung. All I can see now is Melissa charging at Jennifer and her arm being grabbed. The husbands and security must break them up and stand in place until the group disperses.

Jackie is now done with Jennifer because she is acting like an a*shole. Jennifer goes after Jackie now, telling her that she is two-faced and pretended to be her friend. She is fired up over Jackie saying Bill stuck his d*ck in someone else and then orders Jackie to get the f*ck out of her house.

Dolores AND Teresa are going to stand by Jennifer because they both know what it is like to have a husband that is a cheater. Dolores at least knows that Jen is acting like an idiot, but she is deciding to be the empathetic friend. While in the van, Melissa thinks Bill cannot stand Jennifer and that is why he cheated. Teresa, whose face looks like a grease slick, gets a text from Melissa wanting to know why she is staying with Jennifer. She acts like she is staying so she can help calm the situation down. Frank and Dolores conclude that Jennifer is justified in her reaction to Melissa charging at her. Jennifer is thrilled that Teresa had her back when Melissa charged her. She is not going to go to Missy G’s pink party.

In the morning, Jennifer is upset with Bill that he stood by while three women were ganging up on her. She does not understand why he did not defend her. Did Jennifer forget that she called Gorga a b*tch boy when he got involved in the women’s disputes?

Marge and Joe B. are again talking about Louie’s description of his video. They think he changes the narrative to suit what he is trying to convey. They do not find him to be trustworthy. Tiki and Traci find it concerning when Louie told Teresa that if he doesn’t leave, how will she ever learn? Traci thinks that is a comment you would say to your dog.

Dolores remembers when she and Frank went on their first date, and he could not stand to be away from her. Frank spent the night at her house but had to sleep on a mattress on the floor. When he woke up in the morning, Dolores’ mom was throwing holy water on him, and Frank thought the dog was pissing on him. I would not have wasted good holy water on Frank — just saying.

Melissa is now having her pink party. Traci proclaims to be a Jersey barbie — not to be confused with a penthouse pet with her high heels. Dolores recognizes that Teresa is stuck in the middle since she put herself there. Traci, aka Jersey Barbie, is telling Teresa she needs to stand up for her family. Louie looks like he is going to go nuclear and is ready to blow. Teresa, the RHONJ icon, wants Melissa to shut the newbie Traci down.

Jackie tells Dolores that she was adding fuel to the fire when she shared the comment about Bill. Louie loses any credibility that he might still have when he tells Joe that Jennifer feels bad. Teresa, who is looking cagey, then tells Joe that if she thought Jen was evil, she would not spend time together with her. She is going to need to practice what she preaches about loyalty if she ever wants to have a relationship with her brother.

Next week, more comes out about Louis and the situation with his ex-girlfriend, and Bill gets confronted by the guys. Neither situation looks like it will end up well… See you Friday for RHOM!