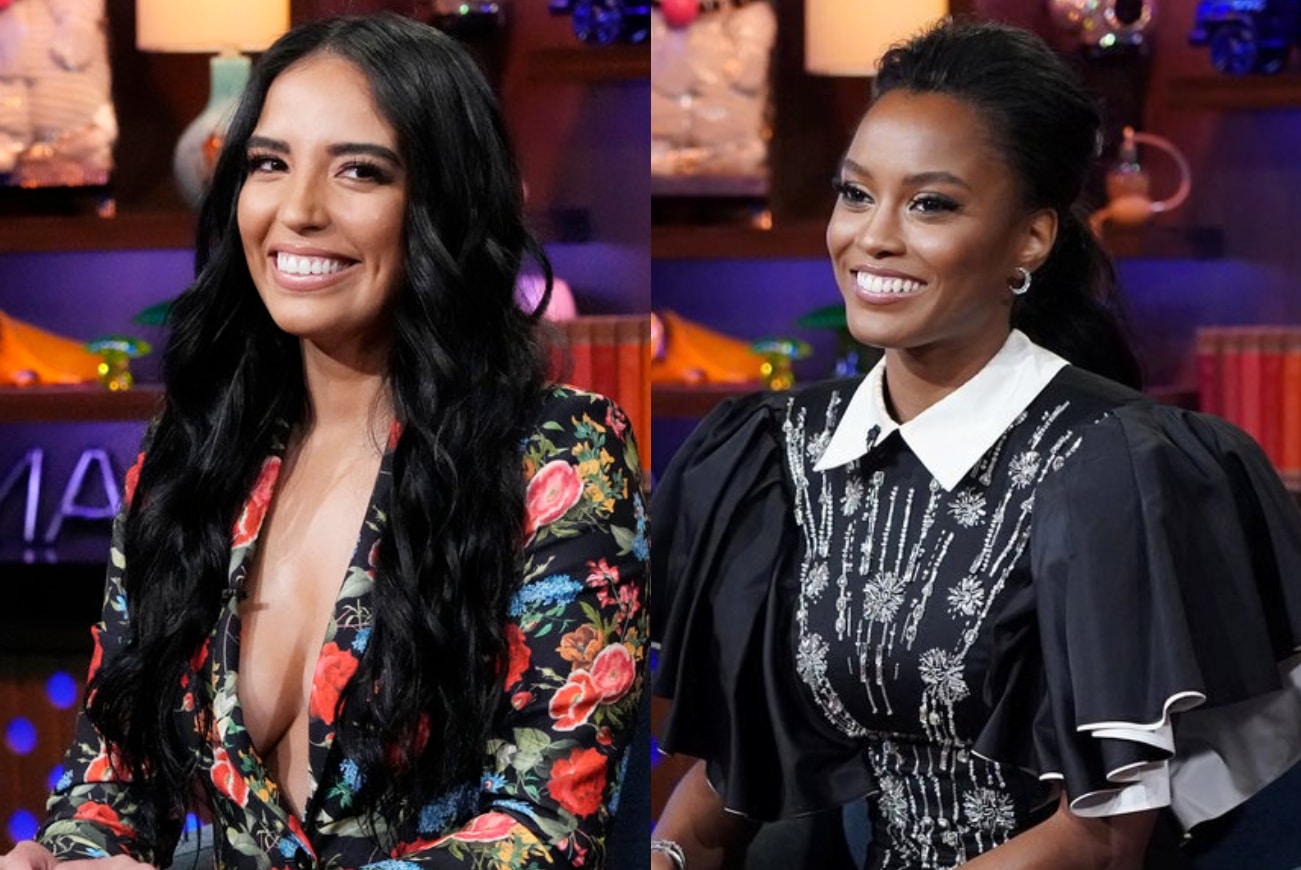 As of now, it’s unclear when the episode will air, but fans are already on the edge of their seats.

In a video chat with ET, Danielle opened up about the altercation, which she only remembers in fragments. “Me getting up out of my seat in retaliation, I definitely remember like the back of my hand… and then there was a moment where I was completely just black.”

“I was hyperventilating afterward,” she explained. “I was very upset, and I had to be calmed down off-camera. Amanda [Batula] had to come out and see me just to make sure that I was OK, because I was very upset. But the in-between that has been captured and then played back in slow motion — thanks to our Bravoholics — that, I definitely did not recall.”

She went on to say, “The next morning, I did have a big bruise on my chest, and I thought it was because Craig had pulled me back… Then watching it back, I didn’t know that the glass was thrown directly at my chest bone. And that was probably more of the reason why I had that bruise.”

Danielle explained her in-the-moment response. “The glass, I threw down — which I think is a more normal thing to do than straight across — but nothing is normal, obviously, in this entire scenario,” said the star. “The lit candle was… something. It was very disappointing to see for myself because I was like, ‘What did I think I was doing with that lit candle?'”

She also addressed the confusing love triangle between Ciara, Austen Kroll, and Lindsay Hubbard. “I definitely didn’t understand why it was a girl-on-girl argument and fighting and viciousness, because everyone is single in the situation,” she said.

“Let’s not forget, Lindsay’s single. Austen’s single. Ciara, you’re single, too. Just because you wanted to stake your claim, does not mean you have ownership of that person. Everyone was free game at that point. So, why turn the house upside down over a guy who’s clearly telling you guys different things? And Lindsay doesn’t really even care all that much. I think it’s a lot of Ciara feeling embarrassed and not wanting to be vulnerable in that embarrassment,” she added.

Danielle discussed Austen’s questionable behavior toward the two women: “People have their moments and it’s not great, but I do think under all of it, Austen is not, like, the worst person ever, as bad as people say or try to make him out to be… I think he’s just a flirt and… it’s almost like, all right. Come on, Austen. Really? Come on. Like, after how many years of doing this, you didn’t have the foresight to see that this was going to blow up?”

She also hinted at the “buildup,” which led to the wine altercation. “Just to put it into some context, we were having a nice — what we thought was a nice — Italian dinner.”

“Andrea had prepared this whole thing. We had a moment where we were talking about, he had been homesick. He was talking about his family and Summer House really does become a family … So we had this really great, I thought, Kumbaya kind of moment at the table there. And then, Ciara goes on this monologue of sorts about how she feels about the whole Austen and Lindsay situation, and I felt for her at that moment, because Lindsay wasn’t really giving her anything.”

“You know when you just want someone to say something back?” she said. “So, [Ciara] just kept going in that moment. She didn’t stop and then she started saying some not-so-great things and the rest of us stood there for a really long time.”

She thought, “‘Are we still going to sit here through this while she’s saying this s**t to Lindsay?’ I mean, for better or for worse, Lindsay could have handled it a multitude of better ways or whatever, [but] I’m not going to sit next to someone who I view as a sister, and after 10 or so minutes just allow her to continue to take it.”

Danielle eventually interrupted the monologue because Ciara was getting “petty.”

“I don’t think I even got more than a half of a sentence in… but my intentions weren’t to clap back at Ciara, or try to make her stop,” she said.

At one point, Ciara mentioned “girl code” regarding the situation with Austen.

According to Danielle, “You don’t get the benefits of ‘Girl Code’ if you don’t put in the time for a friendship for, like, any sort of actual bond only when it’s convenient for you… Do you want to say, ‘Oh, you should be acting a certain way because we’re both females?’ I don’t know. I’m just like, well, maybe you should have just hung out with us or tried to get to know us any better. And then I would feel for you, Ciara. I would, but I’ve tried with you and it, I just don’t get anywhere. So, I don’t care.”

“I almost wanted to pack my bags and get the hell out of there because it was just ugly, and I hate getting to that point, but you have to keep going,” she added. “Did it still bother me, and to this day still bothers me? One hundred percent. Those feelings have not gone away.”

“And then after watching the playback in regular speed… how do you not have the common courtesy and decency to just reach out to someone and say, ‘Hey, I didn’t even know I did that. Again, I’m truly sorry?'” she expressed. “Anything! Any sort of dialogue, any sort of conversation, I would have a lot more respect for her.”

After the alternation, Danielle placed Ciara in an “acquaintance box.” She explained, “I mean, maybe she thinks that I am the worst person in the world and I should be apologizing to her, but from where I’m sitting, I don’t think… no, I don’t think so… Listen, even after our ‘pandemic house’ for season 5, I really… Ciara wasn’t someone that I wanted to put too much time in. I’d rather put her in the acquaintance bucket and not have high expectations just because I don’t think we’re compatible in that way, which is fine.”

Danielle is also upset with Ciara because, in a house meeting, Ciara said she was the first person of color in the group.

In that moment, she felt it was important to let Mya Allen be heard. “I did text Mya afterward along like, ‘Just so you know, I’m here for you forever, and I get it,'” said Danielle. “It was just nice because after that, I really do feel like Mya felt at home. There was a whole guard that was down afterward, and it was just beautiful to see her just let that down and be even more of herself, which is the best.”

Danielle discussed her decision to repeat what Kyle said in confidence (i.e. that he didn’t have much in common with his fiancée Amanda).

“I didn’t know what to do because Amanda is my friend, but I don’t know how to bring the bad stuff to her,” she revealed. “She’s not like a Lindsay to me, where I know exactly how to approach that situation and how to talk to her.”

“[Paige and Ciara] know her best,” she continued. “So they would know what to do, and if they said, ‘We don’t want to tell Amanda, let’s just leave it,’ then I would’ve been OK with that, as well. I just feel like I was in a lose-lose-lose situation.”

The star added, “Show or no show, marriage is forever. I wouldn’t live with myself if I didn’t say anything and they just ended up miserable. I think their happiness is more important than the TV show. And I wanted them to figure it out and be happy when they walked down the aisle.”

Danielle then addressed her drama with boyfriend Robert, which was spotlighted earlier in the season. “The first two episodes, we were so anxious because it was worse than what was aired, to be very honest,” she said. “We were not seeing each other at all. Like, not communicating very well. He had so much going on in his mind because of work. And I was like the same way, starting a new business.”

“He was single for a really long time before meeting me and same here,” she went on. “So it was one of those things where we just had to take a moment and really look at what’s going on. And he’s like, ‘I’m unhappy with work.’ And I was like, ‘I’m stressed as hell at work!’ And it was like, we’re just both going through it right now.”

Danielle explained, “We know we want to be together forever, I’m just not in a rush… I’m not ready to plan a wedding, I’m not ready to have a real baby. I’m so happy with where we are right now. And I think that our careers… I’d rather focus on [my app], get a house, save up some money, and then do all the ‘real’ adult stuff.”

The star also opened up about Lindsay‘s romance with Carl Radke and how this affected Danielle.

“It’s gotten a lot easier,” she said. “The reality was unexpected to me, and how fast they were going, was just a lot for me to take in. I couldn’t do my normal best friend behavior with Lindsay, and get all of the information about the guy that she’s dating, because Carl is just too close to home. He’s family now. And so, I didn’t want to be in the middle of that. I didn’t want to have an opinion on it.”

Now that most cast members are in relationships, Danielle is curious about what will happen to the Summer House friends.

“I don’t know, maybe they’ll give me the boot,” she said. “I don’t know. From where I am in my relationship, I don’t have Robert all the time during the summer. The summer is still the same as it’s always been. It’s my time to unwind, let my hair down, blow off some steam … so I don’t know. For me, it could stay the same. It’s still a show about friends in a house and how we get through life together. It’ll get a little bit more full.”