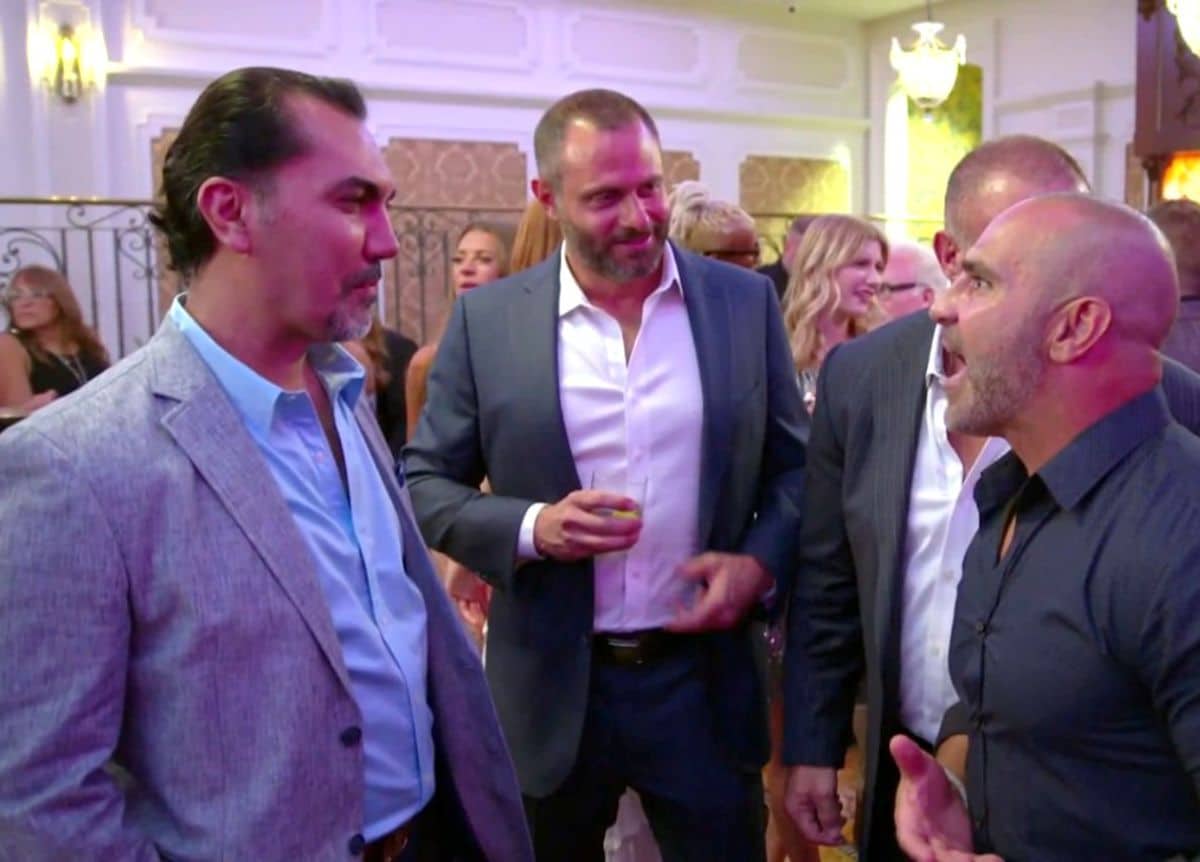 Margaret and Marge Sr. discuss her birthday party. Marge Sr. was born in Hungary, so a Hungarian-themed party makes sense. Marge Sr. is extremely excited about the party — probably because Teresa is not joining the festivities and there will be a lot of men for her to flirt with. Margaret shares how Marge Sr. immigrated over 65 years ago when she was only 10 years old.  Marge Sr. and her parents fled in the middle of the night when there was a Hungarian revolution. She came here with the clothes on her back, and President Eisenhower gave her a doll since it was the holidays. Side note: Marge sharing this story while our country is watching Ukraine deal with this gave me goosebumps watching history play out again.

Teresa and her girls are packing up their gaudy monstrosity of a home. She shares that the buyers want some of her tacky furniture. Dolores comes over to pick up some clothing for the women’s shelter. They discuss the others not wanting to wear her workout line. Teresa acts like she does not care she was uninvited to the party. She thinks Marge is toxic, and dear Tre needs to take another look into one of her garish mirrors and recognize that same trait in herself.

Melissa and Joe have Tiki and Traci over to gossip . She thinks they do not understand how Teresa is another kind of beast. Traci shares that she is concerned about her beautiful little girl not being socially ready for kindergarten. Melissa admits that she is going through issues with Antonia. She is concerned that she will make mistakes that will haunt her.

Jackie has scheduled her ice cream trip with her children. She is going to partake in the ice cream this time since she has not eaten it in 20 years. Jackie picks birthday cake ice cream, which I happen to love, but she is clearly apprehensive about it. She tries the ice cream, which is a big step for her, but you can clearly see how conflicted she is over it. Jackie’s kids seem like they are sweet children, and they have clearly observed their mom’s behavior for some time. You can almost see some relief in their eyes when Jackie can find some enjoyment in this activity.

Melissa and Antonia are going to the gym so Antonia can work through some of the issues she has from her injury. She is fearful that she will get depressed and give up on her dreams, and then she again makes it all about herself and what she went through as a teen. It sounds to me like Melissa and Joe just made their move and did not take Antonia’s feelings into account by uprooting her during her high school year. They pretend they did it so the boys could play football in a better locale, but it is clear that the move was for other reasons entirely.

Jackie is meeting up with Ilene to discuss her eating disorder. She tells her how she thought Evan was fooled by her avoidance of food. Jackie admits it took a lot out of her to not compensate by skipping another meal. Ilene reminds her that most people do not do that even though Jackie thought most normal people behaved like that when they indulged in a treat.

Jackie admits to losing weight last year when the Evan rumors were out there. Ilene suggests taking the kids out for pizza, and you can clearly see how alarming that is to her. Jackie thinks she needs baby steps and agrees to add one extra thing a day. She will work on not participating in compensating behaviors. Jackie shares with Evan what her therapist wants her to do to change her eating habits. Evan tells her that he will love her at any weight.

Jennifer and Bill are discussing the birthday party and attending it. She is happy that Bill is now trying to make their marriage work. Bill has heard from Evan, who apologized for getting heated. Joe G. is holding firm in his little boots and has not reached out to Bill yet. He has not forgiven him, and he is not willing to apologize.

Milania is clearly going to miss her childhood home where she called her dear old dad a troll. They reminiscence over all the good times when their parents’ illegal activity had not yet been discovered by the Feds. Gia recalls her dad thanking their family for supporting their felonious behavior throughout the years. She looks conflicted when she is recalling these memories. Production shows some clips with their dad. Teresa then gets emotional and has an extreme case of TMI, and she attributes it to getting her period. She is thrilled to be moving in with Louie, aka the purple treeple eater, and uprooting her girls and starting a life with a man who is a huge question mark at this point. Side note: Louie’s face reminds me of a giant eggplant and that really pisses me off since that is my favorite vegetable, and his image has ruined it for me. Sorry I just had to vent about that…

Marge Sr. looks fabulous for her age, and she is being coquettish with Tiki and wants to make sure he will stay to the end of the party. Dolores has her high beams on wearing that tight jumpsuit. She really has the best plastic surgeon since her body is really sick.

The guys all act like they are innocent and do not get into fights like the women do, but Bill draws the line about calling his wife a bad person. Joe Gorga should know that by now when he called his sister garbage at his son’s christening. Frank and the rest of the crew know how to move on from difficulties with each other, and they all want Joe and Bill to make up. Bill knows that Joe expects an apology, but Joe needs to take a little step back and stop making this crap about himself. He accurately believes this is between their wives and the men should not have trashed Jennifer. I am glad that they were able to make amends with each other and move on from something that should never have come between them. The guys decide that a trip to Nashville with the ladies would be a great idea for everyone.

Dolores continues to defend Teresa about giving Tiki a pass but holding Traci accountable. Teresa does not fight with men according to Dolores. Marge thinks Tre puts men on a pedestal and I must agree with her.

Marge Sr. gets her grand introduction, and Marge shares how this is a full-circle moment for Marge Sr. She left her country to escape communism with just the clothes on her back. Margaret at this moment thinks her mom was the best role model. She admits she gives her a tough time over her drinking but gives her credit for escaping adversity. The party scene ends with dancing and Bill lifting Marge Sr. up and seeming to really enjoy the evening. Happy 75th to Marge Sr., and congratulations on getting out of such a dire situation. Let us hope and pray that there will soon be some resolution to what is happening in Ukraine.

Next week, it is moving day, and we are headed on an all-cast trip to Nashville. Teresa reverts to her normal raging self and throws plates and glasses at Margaret. I hope everyone is doing well, and see you next week for the Nashville episode when Marge and Tre implode!